I'm briefly in Bali. Tonight I fly to Jayapura in Papua, as the Indonesian half of New Guinea is now called. In a few days I'll be trekking in the Baliem valley. I'm not excited, because I have a cold and don't feel like walking. There probably won't be much internet access in Papua, so the frequency of posts will remain low.

Petrol is 6,000 Rp a litre on the Indonesian forecourt. That’s about 30p. This is absurdly cheap from a European perspective, but it is not a huge discount on the retail price in the US.

I ate at a Hong Kong style restaurant a couple of days ago. It looks out from the Times Square mall, where I have been searching for wet weather gear for Papua, towards Hang Tuah. Two hundred yards away is a prison, complete with barbed wire and watchtowers. A nice central spot for the prisoners, like Strangeways. I have walked past it and to its walls are affixed posters warning about the penalty for drug offences: death.

On the drinks list: yin-ying. The waitress said it was a mixture of coffee and tea. Homo economicus, who prefers a mix of things, probably drinks yin-ying with Coke. I had tea.

A very cross man next to me in a cafe, phoning an internet helpline: “People are laughing at me, lah.” In KL and Singapore every other sentence ends in lah. In Indonesia not at all. To be polite when giving or receiving something (like change), a Malaysian will pass or receive with the right hand, and grasp the right wrist with the left hand. An Indonesian won't.

In Yogya I went to see a performance of wayang kulit, the shadow-puppet theatre. It was the section of the Ramayana in which Kumbakarna heroically goes to his death fighting on behalf of his evil brother.

I knew the story, but recognised almost none of it. The dalang (puppeteer - not to be confused with palang) voices and sings in Javanese, which is distinct from Indonesian, so I could not understand a word. After an hour it became a bit tedious, especially the comic interlude with the clowns.

It was possible, however, to admire the immense skill displayed by the dalang. As well as voicing, he manipulates the puppets, directs the gamelan orchestra, and performs percussion with his feet. They must also possess extraordinary stamina: a traditional performance lasts all night, without breaks. 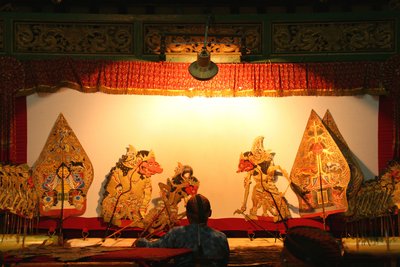 The orchestra consists of the men who play the instruments and the women who sing. All are traditionally dressed, the men in brown sarongs, sky-blue batik shirts and batik Javanese hats, the women in peacock blue shirts with shocking pink sashes. 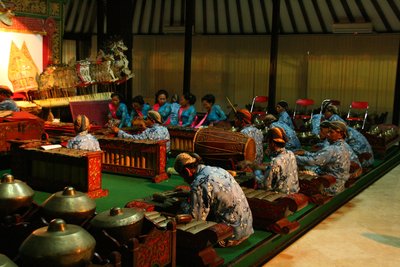 All wayangs have very long arms, and the hands are folded back, like Javanese dancers’. The kulit (leather) puppets are in profile, and the faces have very long noses. The good guys, like Rama, are thin, and their faces humbly point down. Some of the bad guys are muscular and hairy. The style also influences Javanese and Balinese art, and it is very distinctive. I love it, and cannot think why I did not buy some puppets.

The puppets are painted on both sides. Men sit on the side of the dalang, and they see the painted puppet and the orchestra. 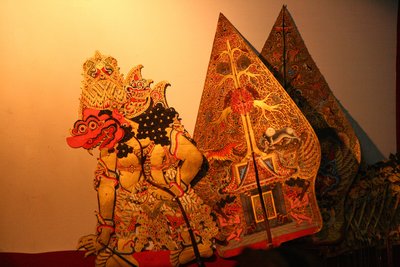 Traditionally, women sit on the other side, and see only the silhouettes of the puppets. Like a ladyboy in Thailand, I got to experience both sides. It is perhaps better on the women’s side. 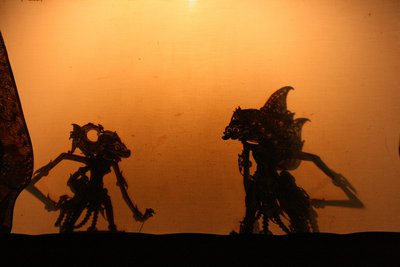 Posted by Wardsan 00:50 Archived in Indonesia