Following my eighth trip to Denpasar airport I am in Makassar, at the south end of Sulawesi. The locals seem very friendly, as in "you want a friend for tonight?". (Yes, if she has gorgonzola.)

Mount Rinjani is Lombok’s highest peak, at 3,726 m. It is, of course, a volcano, and it is situated in a national park. We stayed at a hotel with splendid views. 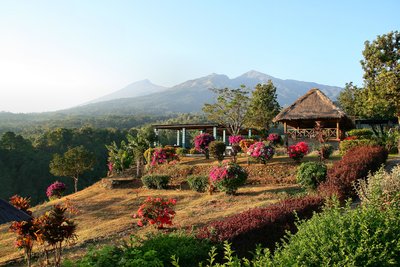 On our first full day near Rinjani we went on a lengthy but easy walk through a local village and then to see a couple of waterfalls. Most of us swam in the first one, which was cold but invigorating. 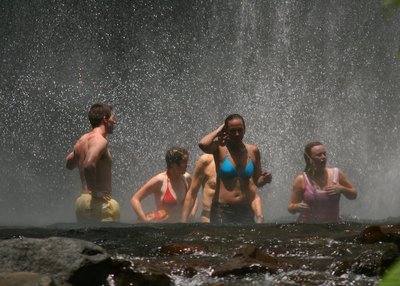 Katni, our guide, was a Sasak like 90% of the population of Lombok. 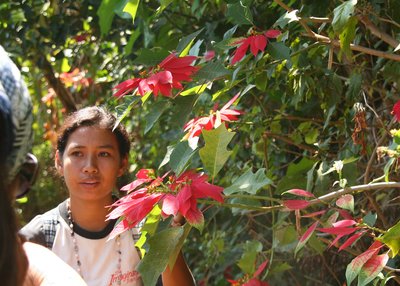 The houses in the village were, as everywhere here, bungalows made of bamboo and elephant grass thatch. A couple of black-toothed old women sat on a verandah chewing betel leaf, lime and nut, their mouths red as if they had been drinking blood. The odd dog and child wandered around. But the village seemed surprisingly empty. 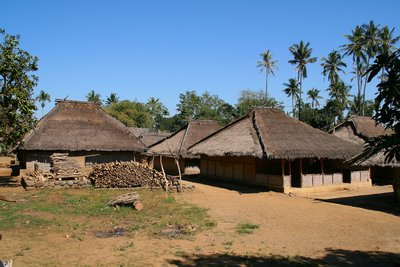 Katni showed us inside a hut. On a second level was a house for the spirits, which is where the offerings go. There were no windows and there was a strong smell of smoke, which keeps the mosquitoes away.

There are very few dogs in Java; Muslims do not like them. Bali is full of dogs. Lombok, although notionally Muslim, has plenty too. The Sasak people, who make up the large majority of the population of Lombok, cleave to a version of Islam that bears little resemblance to the version practised in Arabia Felix. Except for the imams, they do not fast during Ramadan. They may drink alcohol – they make both rice wine and palm wine - and eat pork. And they keep dogs to protect the village and its crops from monkeys. (In the Gilis, on the other hand, just off Lombok, there are no dogs, and millions of cats.) And each house as a little spirit house within it, where offerings are placed. They also grow tobacco, and dry it, and then roll it in corn leaves to make very strong cigars.

When they marry, Sasaks file their front two upper teeth down to about half their natural length.

It is not a poor village. The village has had piped water for thirty years.

We soon discover why the village was empty. At one end of the village there is niche in the outer wall of a hut. In this niche is a television, and in front of the television are nearly all the village children. We try to get them to dance, but they are too shy. Carey bravely goes up to demonstrate, provoking widespread but not universal hilarity. 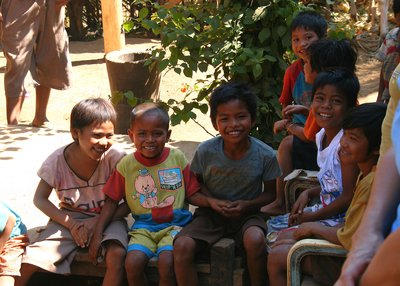 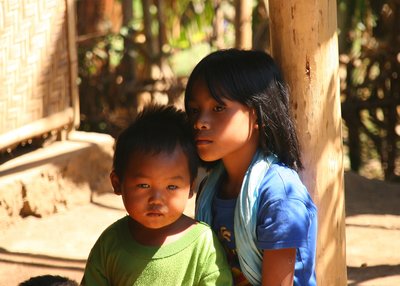 We walk around the paths near the village. A great variety of crops grows in the area with little or no intervention: cashew, cacao, coconut, kapok, coffee, cotton and various fruits. They also grow a little wet rice, which does need a lot of work, but all in all it takes little effort to produce a healthy, diversified and plentiful diet here. Cashews grow at the bottom end of a fruit. The fruit tastes much like apple but is very tannic. 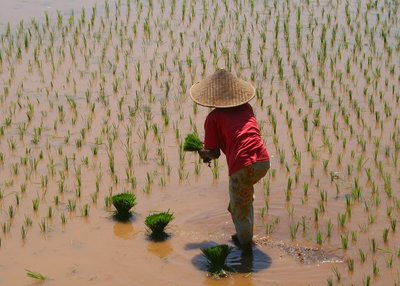 On our second full day in the area we climbed 2,000 m to the crater rim, which is at 2,641 m. We were accompanied by porters carrying water, tents and cooking equipment. We walked through forest most of the way, and saw a few black leaf monkeys as well as the ubiquitous long-tailed macaques. It probably took about six hours of walking; there were a handful of rest stops along the way and it was not especially hard work. Long-tailed macaques congregated at the higher rest stops. 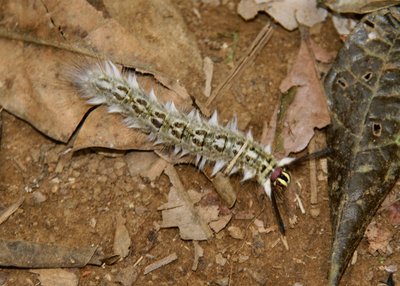 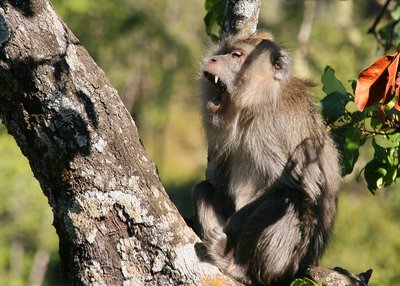 We also stopped for a delicious lunch cooked by the porters, which I ate sitting on a tarpaulin in the sun. During the climb we experienced the usual progression into temperate weather, the trees becoming more and more stunted and eventually disappearing, and the bryophytes taking over at altitude. We also saw edelweiss.

We were supposed to camp on the crater rim, but it was extremely windy, so instead we camped at the last rest stop half an hour’s walk below. It was a beautiful spot, from which we could see the Gili islands to the north west. The sun set directly behind the cone Gunung Agung in Bali, maybe forty miles to the west across the Lombok Strait. 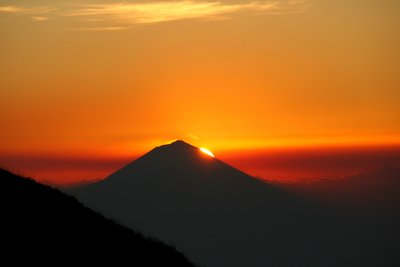 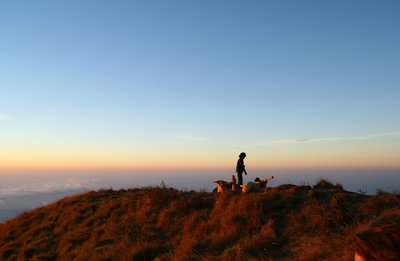 I had bought a top at the Matahari store in Yogyakarta that happened to be identical to the Primark top of Steve, the tour leader. So here we are gurning for the camera. 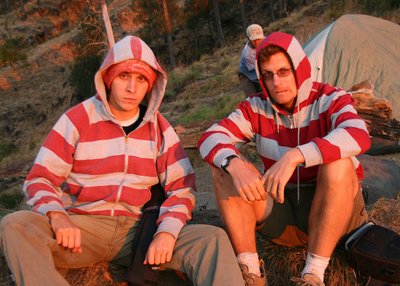 There was a forest fire about a mile away, so Steve and Pam, the trainee tour leader, got up every couple of hours to check on its progress. The wind was very strong and the tents in poor shape, so the draughts got in. No-one slept much. 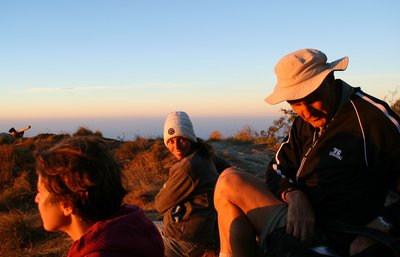 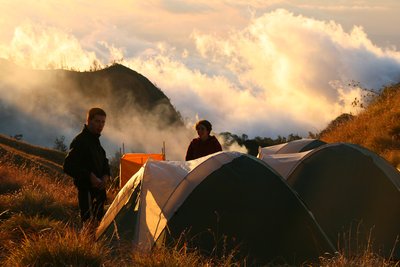 We climbed up volcanic sand to the crater rim in the late afternoon and again in the morning. It was cool but not cold at the rim. 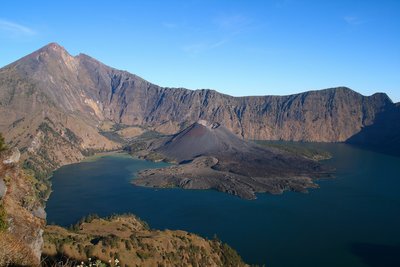 The floor of the crater is largely occupied by a lake, but there is also a small and perfectly formed (at least if you're a barnacle) volcano in the crater, Gunung Baru, “new mountain”, which is 200 years old. 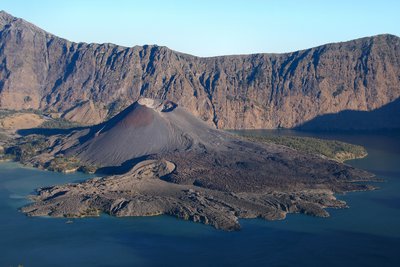 This is Sakur, one of the guides. 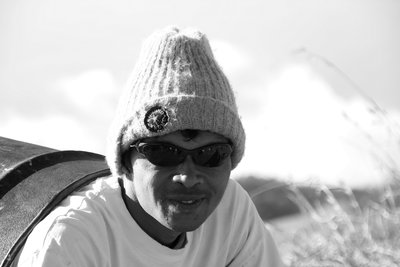 The journey down was fairly hard, but nothing like Kinabalu, and I was hardly stiff at all the next day. Perhaps walking with a stick made the difference.

We passed the night in a nice hotel at the port. 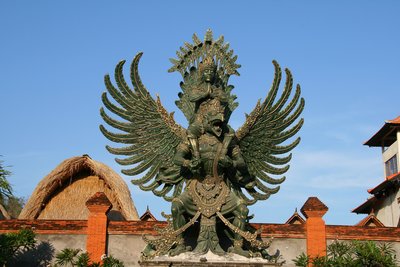 It was Pam’s last night on the tour and we went to a bar where an amazingly good band played Rolling Stones covers. (Indeed, the quality of the live music in Indonesia has been remarkably high.) And then a quick crossing by outrigger perahu to Gili Air. In the afternoon I walked around half the island, had lunch, and then visisted a book exchange. There were as many Dutch books as English ones. The quality of the books read by the Dutch and Scandinavians is far higher than those read by English-speakers. In a café on the beach I drank mango juice and read.

The following day, five of us went on a snorkel trip in an outrigger perahu. There was a lot of faffing around and not enough snorkelling. The first snorkel spot was poor, the coral completely dead, but I did see Vlaminck’s unicornfish, schooling snapper, goatfish, lizardfish and Moorish idols.

A second swim was better, although the coral was not particularly healthy. The third, opposite the main street of Gili Air, was the best, with healthier hard and soft corals and plenty of sea squirts. I also saw a nice black boxfish with orange spots, several masked pufferfish, orange-spot surgeonfish, humpback unicornfish and lots of Moorish idols. We saw a hawksbill turtle grazing on sea salad. Charlotte dived and touched it, at which it swam off. On the third swim a gorgeous trevally with an electric blue back and grey-green body shot past. Just before I got out of the water, I met a turtle in the shallows. It came up to breathe three times, and then swam off languidly. Indeed, turtles have only two gears: neutral and languid.

The highlight, though, was playing with a cuttlefish on the second swim. Sepiids, like octopus, possess the ability to change their colour, which ability is used for camouflage and for communication. They do so by means of pigmented chromatophores and reflecting iridophores. They can also control the polarisation of the light reflecting from their bodies. They have three hearts. And, like octopuses (don’t say octopi; octopus is not a Latin word), they are fairly intelligent – staggeringly so for a mollusc. I watched the cuttlefish, and the cuttlefish watched me, for several minutes, as it wandered around the local corals. Every twenty seconds or so the cuttlefish would change its colour. It started off cream, but changed to chocolate and cream, yellow with bright blue spots, and dark red with cream spots. Slowly I extended an arm and touched it; at which it cuttled off, literally jet-propelled. Since it did not squirt any ink, though, I assume I didn’t worry it too much.

In between snorkels I visited the Gili Meno Bird Park, which is not up to much. It mainly houses birds of the parrot family in rather small cages.

On the third day on Gili Air I dived with Blue Marlin. The first dive was a deep dive – 31 metres – and lasted only 38 minutes. We dived through an amazing landscape of canyons, with good visibility. There were fish but we turned it into a muck dive. The second dive was just off the island, Hans Reef, a sandy stretch with bommies, culminating in a huge bommie called the Brainiac, perhaps 15 feet high and twenty wide. This was a rich environment, especially the clouds of red and blue anthia at the top.

Posted by Wardsan 16:05 Archived in Indonesia