As I mentioned before, Flores is 85% Christian. I had expected that this Christianity would be a thin veneer on a strongly animist base, but actually it goes deep. Portuguese missionaries first arrived in Solor, just to the east, in 1561, and in the eastern part of Flores it has a long history. In the seventeenth century the VOC evicted the Portuguese from most parts of Flores and took over the trade. They exported sappan, cinnamon and slaves, which is why much of the population lived in the hills. The trade in slaves lasted informally into the twentieth century, although Holland abolished slavery around the time that Alfred Russel Wallace was visiting in the 1860s. The Portuguese retained enclaves in Larantuka, Sikka and Paga, and it was their religion that won out (the VOC were never interested in proselytising).

In Moni I went to Chenty’s restaurant in the evening. Next to the verandah forty chairs were lined up in rows. There were two bare electric lights. I assumed it was a cinema, but then a large group arrived, including a couple of women dressed as nuns. Children sat at the front, then women, then men. At this point Bjoern, Kai and Simon, the Swiss guys I was dining with (with whom I had also dived in Labuanbajo), gently pointed out that the chairs were lined up in front of a shrine devoted to the Virgin. There was no priest. A woman led the prayers, very quietly. They all recited unhesitatingly, often with their eyes shut, in a monotone. Most of the responses consisted of the same prayer: ‘Santa Maria, buna Allah…’ (Holy Mary, Mother of God) etc. In between they sang a few hymns; the women sang in harmony. The prayer was probably repeated over 200 times in all, so perhaps the Virgin is hard of hearing too.

In SE Asia I always say that I am a Christian. It is easier than explaining disbelief, unthinkable in most parts here. And as a description of cultural background it is true.

In Waiara, a little east of Maumere, I stayed at Sea World Club. The resort is owned by a charity run by a German priest, Pater Heinrich, who lives at the resort and conducts masses nearby on Sundays. It is a collection of bamboo bungalows by the sea, some with hot water, with a bar and restaurant. The restaurant serves superb grilled fish. I got a bungalow to myself for $25 a night. 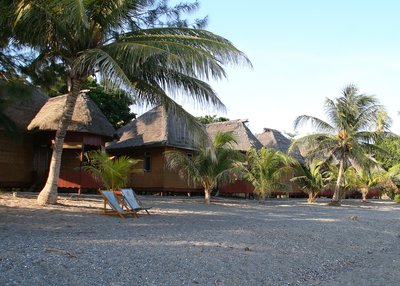 Embedded in the paving stones were the blue stones from the beach near Ende. 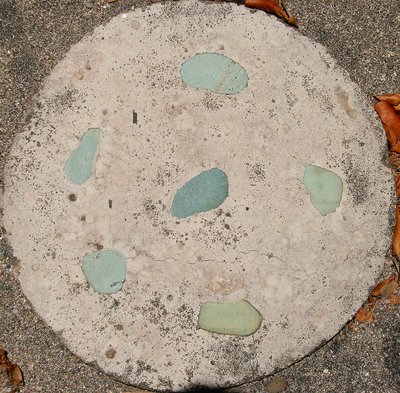 In each bedroom there is a diglot New Testament in English and Indonesian: an international Gideon Bible. I read the Gospel according to Matthew and some of Acts. My grasp of the New Testament is largely limited to old scripture lessons, and readings from weddings and funerals, so Acts in particular was informative. 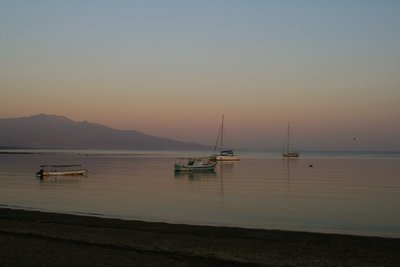 It was the New King James version, which seems to have taken the King James Bible and updated phrases rather randomly. Like all other versions, it’s a bit prosaic in comparison. Thus

Our Father in Heaven, hallowed be Your name. Your kingdom come. Your will be done on earth as it is in Heaven. Give us this day our daily bread. And forgive us our debts, as we forgive our debtors. And do not lead us into temptation, but deliver us from the evil one. For Yours is the kingdom and the power and the glory for ever. Amen.

Does the prayer really contain a plea for debt forgiveness? Isn’t it better to think of it as a reference to torts rather than contract? Why mess with “for ever and ever”? And why not ‘today’ if you’re concerned about linguistic desuetude?

Let the little children come to Me.

Out of the mouths of babes and nursing infants You have perfected praise.

As for the terms in Indonesian, they sound Dutch and Arabic.

God is Allah;
Jesus is Yesus Kristus;
a Christian is orang Kristen;
the Holy Spirit is Roh Kudus;
the Devil is Iblis, another name for Shaitan in Arabic;
Apostles are Rasul ('messengers' in Arabic);
Matthew’s Gospel is Injil Matius;
the Bible is Alkitab, which is 'the book' in Arabic;
the Lord is Tuhan;
Heaven is Sorga;
the Sermon on the Mount is Khotbah di Bukit, again from Arabic - the khutbah is delivered by the khatib;
priest is Imam;
Joseph and Mary are Yusuf dan Maria;
verse is Surat, which also means letter;
James, Matthew, Mark, Luke and John are Yakobus, Matius, Markus, Lukas and Yohanes;
Hebrews, Philippians, Corinthians, Ephesians and Thessalonians are Ibrani, Filipi, Korintus, Efesus, Tesalonika.
Acts of the Apostles is Kisah para Rasul
Revelation is Wahyu (also derived from Arabic, usually used to describe what was received by Mohammed).

I snorkelled at Sea World a few times. Maumere used to be a very famous dive site, but an earthquake and consequent tsunami in 1992 killed the coral (as well as destroying Maumere). It is growing back, but very slowly. Overall, the hard coral is in very poor shape, and there are few sponges or feather stars. On the other hand there are vast numbers of sea urchins and plenty of starfish and octocorals.

On the first go, I saw a two-metre long mottled brown sea cucumber that I at first took to be the tentacle of a giant octopus. (Before the Portuguese came there were Buginese in Flores. They obtained sea cucumbers from the bay where I was snorkelling. They also exported rubber, sandalwood, cinnamon, shark fin, coconut, cotton and slaves.)

I also saw large schools of grey trumpetfish; lots of razorfish; a school of very nervous juvenile squid; a lionfish, swimming in the open sea eight metres down; some rock cod, snapper and jellyfish; two boxfish; and a pipefish, six inches long, cream with cursive purple lines. It was very relaxed; I even touched it.

On my second snorkel I saw a lobster; a green chromis with a huge sea louse on its side, a third of the length of its poor landlord; lots of pufferfish and some razorfish; a couple of flutemouths and lots of juvenile butterflyfish.

The third time I went swimming I found a blue-spotted fantail ray, trumpetfish, and razorfish. On the sandy shallows I found what appeared to be a jellyfish walking along the bottom. This is not what jellyfish do. In fact it was a crab, which had found a jellyfish and was carrying it on its back. Some crabs do this permanently, and devote a pair of claws to holding on to their dorsal defence at all times. [There are three families of crab that carry things for camouflage: Dromiidae, Homolidae and Dorippidae. A crab carrying a jelly is probably a Dorippid. Indeed, in one of the marine books I have seen there is a photo of a Dorippe frascone carrying an upside-down Cassiopeia andromeda, taken in the same location I saw this crab.]

I sat out on the verandah reading. The light attracted insects, which attracted geckos. The smaller, common geckos say ‘tut tut’. They are called cicak in Indonesian, which is presumably imitative. They are probably a thirtieth of the length of the Komodo dragon. I think they are the common house gecko, Hemidactylus frenatus.

The larger geckos are the pale ones with red spots, called tokek. They are very loud; you can hear them from 70 yards away or more and they often wake you up at night. It sounds as if Donald Duck were saying ‘thank you’ very firmly, speaking through a kazoo.

The night before flying to Bali I returned to Sea World. As I sat giggling to Pourquoi j’ai mangé mon père I heard unusual gecko sounds above. A pair of cicak kept approaching each other. One would bite the other on the neck. Sure enough, a few minutes later one climbed on top of the other and wriggled for a minute. As soon as it was over they separated. And then both licked their private parts. Because they could. 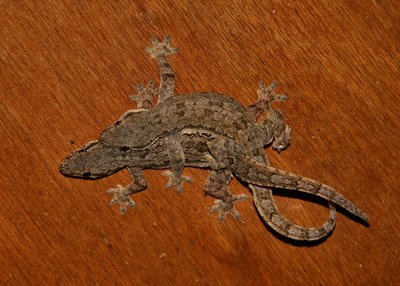 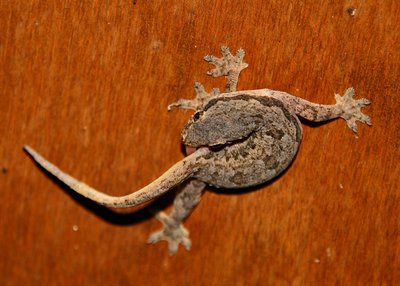 Posted by Wardsan 13:37 Archived in Indonesia