With Angkor Wat, Borobudur must be the best-known site in Southeast Asia. It is a Buddhist temple on a hill, built in the reign of King Samaratunga between 778 and 824 AD. The carvings, in both high and low relief, were added under his daughter. 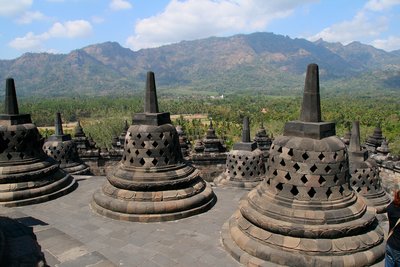 According to Raffles, who wrote a heavy book on Java, the structure is 620 feet square and 100 feet high. There is a single stupa at the top, as you would expect, about 15 metre in diameter. In all there are 1,545 stupas and 400-odd Buddhas, mainly in niches. 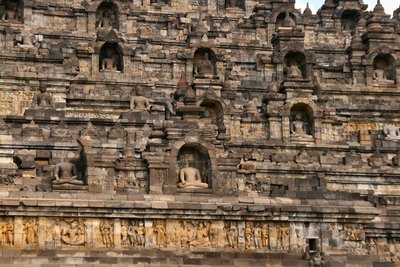 It is built on 13 levels. Reliefs decorate the wall, inside and out, on most of these terraces. If I have it right, the lowest two represent the world (Java). Levels 3-7 represent stupas, 8-10 Kathmandu, and the top three, three levels of heaven. That makes no sense to me, I admit. 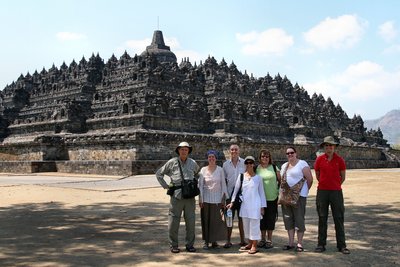 To walk around all of the levels and see all the friezes would require a five kilometre walk. Most of the friezes, if I remember correctly, relate the lives of Buddha, and depict examples of the virtuous life and its opposite. The sculptures are in excellent shape, given their age. This is presumably because they were covered in volcanic ash for most of their life. 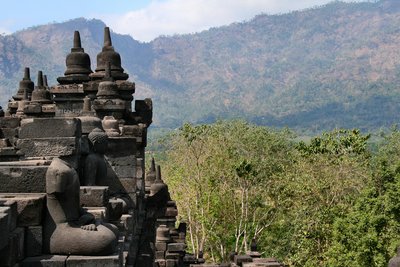 Signs in strategic spots at the temple apparently instruct on personal hygiene: “keep clean” and “no scratching”. Neither easy for a backpacker. 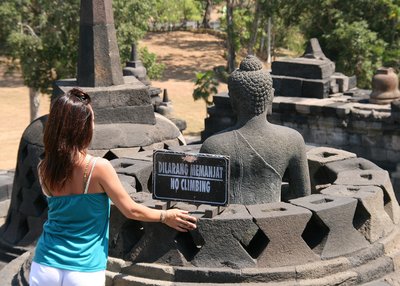 The top three levels are open terraces covered in stupas. Unusually, these have holes in them: 60, then 80, then 100 at the top terrace. Apparently they represent kinds of guilt (or perhaps sin). Each stupa contains a Buddha image. It brings good luck to reach through a hole and touch a finger (if you are female) or a foot (if you are male). The main stupa, the highest heaven, is hole-free: no holes, no guilt. 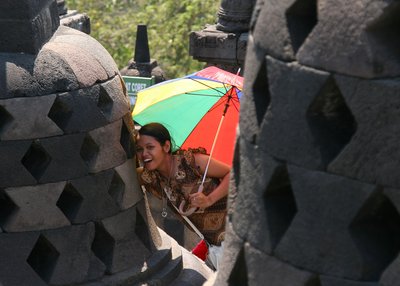 The temple was built with dowels, giving each block some room to shake without falling. Nevertheless, it was eventually destroyed by the violent earthquakes common in Java. Theodore Van Arp cleaned and restored the superstructure between 1907 and 1911. Restoration of the lower part had to wait until 1973-83. The entire construction was dismantled, and reinforced concrete foundations and drainage were added. It seems to have worked well, although the concrete foundation covers the lowest level of the frieze.

At the site there is also a boat museum. On one of the lower terraces of the temple, on the northern side, are engraved two ships, one larger than the other. Both have outriggers, two triangular masts and two staysails. 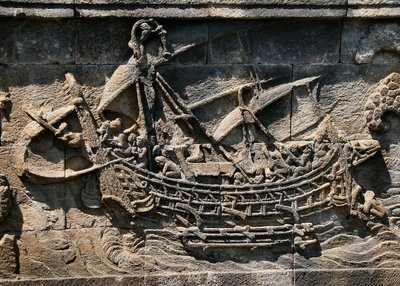 A former naval officer named Philip Beale decided to build an accurate replica of the larger ship and to sail it along the cinnamon route from Indonesia to Madagascar and Africa. He teamed up with an Australian ship architect and with As’ad Abdullah, a local fisherman and shipbuilder. The ship was launched in 2003 and sailed to Madagascar, Cape Town, St Helena and Ghana. It is now the centrepiece of the Borobudur Ship Museum. 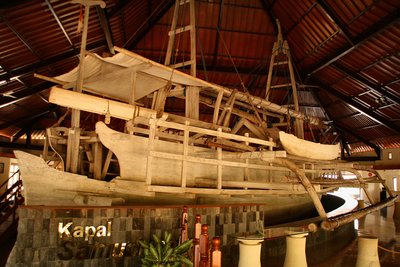 Boats all over the archipelago still possess these outriggers, in effect turning the boat into a thin, keelless trimaran. Even tiny rowing boats have an outrigger. I have wanted to see them for as long as I can remember. They are beautiful, but less stable than you would think. They let in a lot of water.

Madagascar was an symbolic destination for the reconstructed boat. Malagasy is an Austronesian language. Indonesian traders first visited three thousand years ago, and Madagascar was first settled by Indonesians during the Sriwijaya kingdom of Sumatra (which is where the Malay language comes from), in the seventh to ninth centuries AD.

Many words are similar in Malagasy and Indonesian. Yam is ovy in Malagasy, ubi in Indonesian. Rice is vary and padi; a river mouth is hoala and kuala; an octopus horita and gurita; and easy/cheap is mura and merah.

Posted by Wardsan 12:50 Archived in Indonesia