I’m back in the northern hemisphere in order to get a new Indonesian visa. The rainy season seems to have begun in Kuala Lumpur. I am predictably suffering from culture shock after Nusa Tenggara. My room has a flush toilet, a shower with hot water, a basin and a television. I have eaten roti canai twice in my 16 hours here: bliss! (On the other hand, the coffee is sadly inferior.) What has struck me most, though, is that nearly everyone around here is speaking Indian, Chinese or Arab languages. There’s not much point trying to speak Malay to someone who speaks English just as proficiently.

In the UK, consumption and aggregate demand display a strongly seasonal shape. There is a sharp peak in the fourth quarter, due to Christmas spending, and then a sharp dip in the first quarter, while the second and third quarters are in the middle. This is why the GDP growth figures you see have to be seasonally adjusted.

In Indonesia there is a similar pattern, if you filter by lunar years. Demand for goods and services rises sharply during Ramadhan, and prices rise accordingly. By law, workers receive an annual bonus at Idul Fitri.

Despite the fact that it is a month of fasting, Indonesians spend more on food than at any time of the year. This is because they are buying fancier food with which to break the fast (buka puasa), and because prices are higher, but also because people eat more. This may be due to the blowout at Idul Fitri, but restaurants are very busy throughout the month.

Even with price hikes, supply cannot always meet demand. Last year there was unfulfilled demand for sugar and cooking oil. Right now there is a problem with LPG supplies. The government has introduced a programme to convert kerosene to LPG throughout the country. Pertamina, the state petrol company, cannot keep up.

One good reason to come to KL is to buy books. In Indonesia I have started to encounter the book famines that I feared all along. In Malaysia and Indonesia at least half of the retail space of a bookshop is devoted to wealth and how to acquire it: business, economics, sukses books. A surprising portion of the residue is devoted to electronic Korans. In Kuala Terrengganu the few English books available were thrillers and romance only, and I made do with a couple by Martin Cruz Smith, which turned out to be very good. In Solo, on the other hand, there were six books, all Penguin Popular Classics.

How to make a Vietnamese hat: take some green Latania (latan palm) leaves and spread them out in the sun. Leave for two or three days. When they are white, spread them on the ground to soften. Iron out the creases with a heated ploughshare. Construct 16 bamboo hoops of varying sizes. Take the biggest, and attach eight or ten bamboo sticks to the rim, so that it forms a cone. Drape the other bamboo hoops on the cone. Stitch the leaves on to the cone. Reheat the hat over burnt sulphur to whiten the hat and prevent mould. 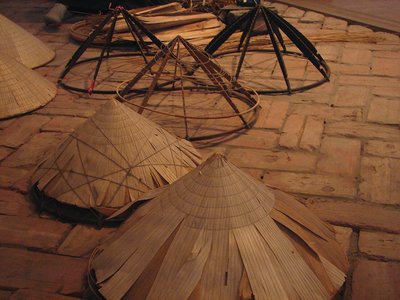 Naturally, you should not do this unless you have grown up in a village that specialises in hatmaking.

Posted by Wardsan 12:13 Archived in Malaysia