The newspapers are full of stories about overcrowded public transport. Most people in Indonesia try to travel home to their families to celebrate Idul Fitri (Eid), which is at the end of this month. It is difficult to travel at the moment, so my plan of exploring the far eastern islands of Nusa Tenggara is exploded. I have to do a visa run in the middle of next month, which leaves me a fortnight to see anything after Idul Fitri. It’s frustrating: I have seen all I want to of Bali, lovely as it is, and if I had known the people from Alor were never going to reply, I would have headed straight to Flores last weekend.

I have also been paralysed by a fear of getting stuck in the middle of nowhere, outstaying the visa and being chucked in jail. I met a chap in Ubud who had spent eight days in prison for visa violations, which did not help. Nevertheless I have come to the conclusion that the extent of my fear is irrational and have managed to find a plane ticket to Flores, flying tomorrow. Flores, predominantly Christian, is nominally less affected by Idulfitri, although transport everywhere in Indonesia is affected by holidaying Javanese. The idea is that I will dive in the west, around Komodo and Rinca, and then head east via yet another volcano. I don't expect to have the means to blog, but will upload a couple of posts now and then drip-feed them over a couple of weeks.

I've fallen into the arms of the Danish mafia in Bali. In Ubud I spent a lot of time in a cafe owned by Karsten, from Aarhus. He referred me to my current hotel, run by Minnie, and she referred me to my travel agent, run by Nikolai. I trust the Danes, on the whole. If they don't like something they tell you to your face.

They aren't corrupt, anyway. The 2008 Corruption Perception Index has been published by Transparency International. Government attitudes towards corruption are ranked by survey respondents on a scale of 1 to 10. First equal were Denmark, Sweden and New Zealand, on 9.3. Singapore was the top Asian, fourth on 9.2. Malaysia scored 5.1, Thailand 3.5, Vietnam 2.7, Indonesia 126th on 2.6, the Philippines 2.3, Laos 2.0, Cambodia 1.8 and Myanmar came bottom with 1.3. ASEAN members are, as a group, markedly corrupt.

The headline in the Jakarta Post? “Progress”. Last year Indonesia came 143rd with 2.3.

The military have played a large role in the modern history of many southeast Asian countries. This is particularly true in Indonesia, which has usually been led by a military man. Many of the streets are named after heroes of independence. There is a Yos Sudarso street in every city.

General appears to be Jendral in Indonesian. Other ranks seen on street signs are Brigjend, Mayjend and Letjend.

In Our Time is back. Thank goodness for that.

Every now and then the Bintang Kejara flag, or morning star, is hoisted in Papua. It is a flag of independence. Showing the flag is a sedition offence created under government regulation 77/2007. Eighteen people were arrested in Kuramki Dam village this week for hoisting it in the middle of the night. The maximum penalty for the offence is the death penalty. Judging by the label of government regulation, it appears that the government has the power under emergency legislation to create capital offences without reference to parliament, and to execute people for them.

Papua remained under Dutch control in 1945, and became part of Indonesia only after a fictitious ‘Act of Free Choice’ in 1969. Anti-Indonesian feeling is reportedly very strong. The worst running sore is the management of a gold mine, operated under concession by PT Freeport Indonesia, which I understand is a US-owned company. Consideration for the concession is paid to the government in Jakarta, and so Papua is believed throughout Indonesia to receive none of the revenues from its mine. Similarly, I have heard it said that the terms of the concession require indigenous labour to be hired, and Freeport hires Javanese. Whether or not these are true – and I believe that it is the policy of the Indonesian government to return a large majority of the revenues to Papua, so no doubt local politicians have nice cars – the mine is a symbol of Indonesian oppression. There are bombs in the concession area every so often.

Meanwhile in Malaysia, the blogger arrested this week under the Internal Security Act has been detained for two years, to be reviewed after six months. The Internal Security Act delegates to the Home Minister the power to detain without trial for a period determined by the Minister. The courts can only check whether due process has been followed; they cannot question the length of the detention. At least 60 people have been thus detained under the Act; most are suspected Islamic extremists.

Who passed this draconian legislation? The British, during the Emergency. The Malaysian government, in power continuously for the last 51 years, has never found it convenient to repeal it.

Time for some pictures, so here, for the edification and improvement of the readership, is a selection of Vietnam’s revolutionary posters. 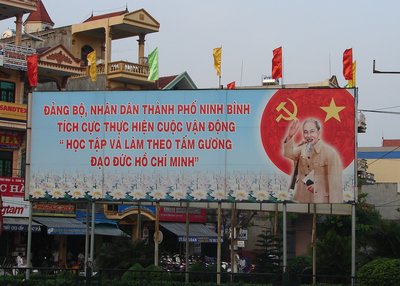 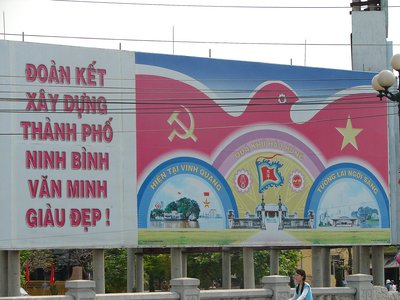 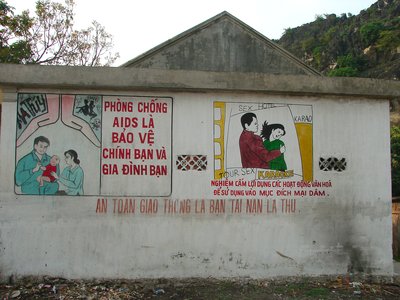 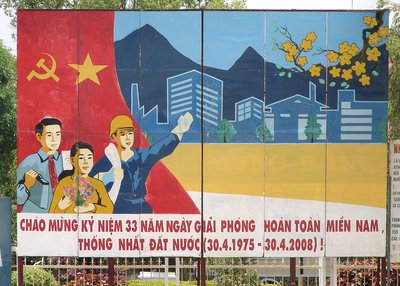 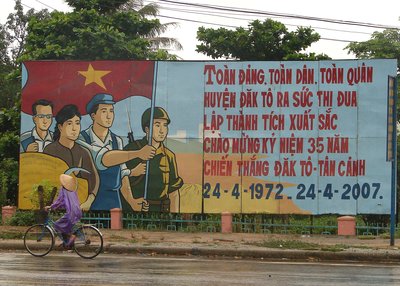 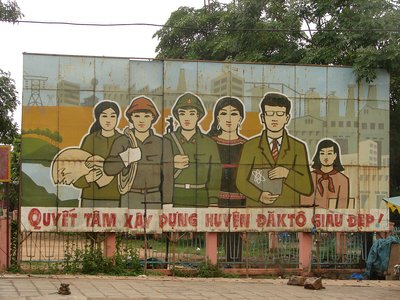 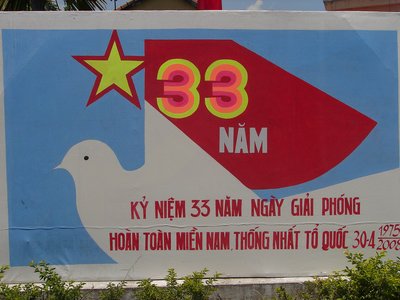 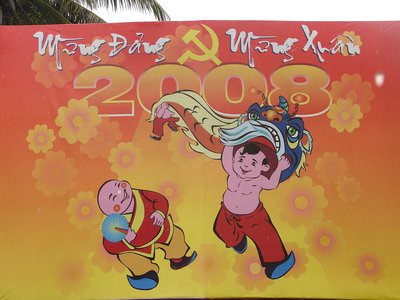 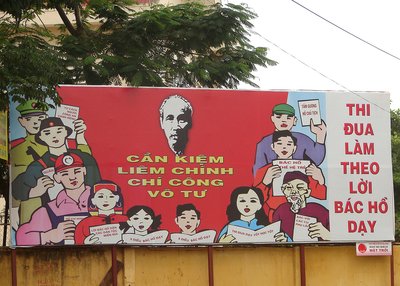 They have a pleasantly 195os feel about them. I like the ones with atom symbols and scientists in lab coats and glasses.

What are they about? They began as war propaganda; now you don’t see any humiliated foreigners on the posters. They celebrate anniversaries: Ho’s birthday; April 30th; military victories. They advertise the five-year plan. They emphasise Uncle Ho’s continuing Obi-Wan presence among us. They inveigh against the perils of drugs. They encourage people in the countryside to have only one or two babies (people in the cities are already doing so). They warn again using prostitutes (most Vietnamese men ignore this advice). They warn against HIV; ten years ago it was jolly condoms, as it still is in Laos, now it’s Munchesque skeletal figures. 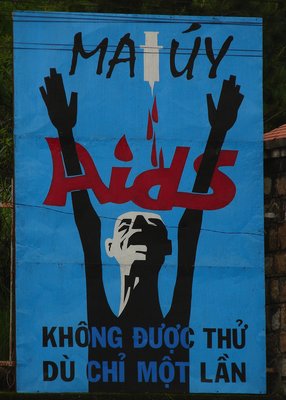 Posted by Wardsan 18:07 Archived in Indonesia