My plans, such as they are, are in disarray. I had hoped to be diving in Alor by now, but the people who run the dive shops over there never answer their phones or reply to SMSs, so I ended up staying in Ubud for a while. Ubud is a lovely place, with a rich cultural life and lots of extremely nice shops selling woodwork, silver, art and clothes. Very few of the buildings are abovew two storeys. The main roads form an elongated pi, with padi fields between the two legs, so it is fairly rural even in town. 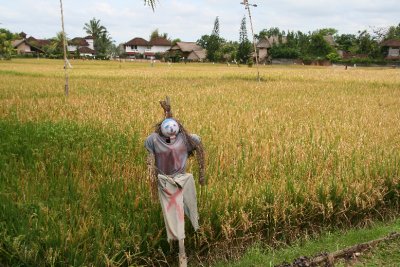 A lot of tourists end up staying, and it has a slightly hippyish atmosphere. It is the sort of place where the 'mind/body/spirit' section of the bookshop is the bookshop and where small ads in shop windows sell 'spirit channelling' services to the credulous and the intellectually lazy (most people).

I am in the market for none of these and want to dive, so I came to Sanur, on on the southeast coast of Bali, in search of mola mola. The southern part of Bali contains the beach resorts, and a large proportion of the population is Javanese, or so I am told. Sanur is the resort for middle-aged people with bulging stomachs and wallets, and families with children. Seminyak has more twenty- and thirty-somethings but is not a wild place. I have not been to Kuta but I have a Boschian vision of streets full of vomiting Australians.

I dived at Nusa Penida today and failed to see any mola mola, but did encounter a strong downward current, which was unpleasantly stimulating. I also saw some enormous giant trevally and a gigantic starry pufferfish, and at the other end of the scale two pairs of nudibranchs, each one on top of the other. Nudibranchs - I have previously mentioned that they are hermaphrodites - line up head to toe and right hand side to right hand side to mate, and each fertilises the other. So what the slugs were doing on top of each other I am not sure.

One wonderful thing about Ubud, although not restricted to that location, is the suckling pig. After three months in Malaysia and Indonesia, any pigmeat is delightful, but the babi guling is the moistest wonderfullest pig I have ever eaten. Any lunchtime in Ubud not spent pigging out is wasted. 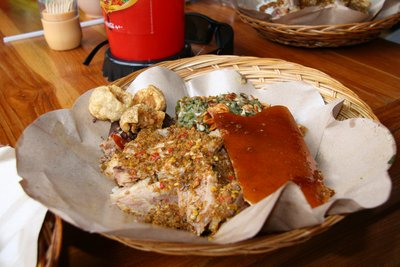 Bali is predominantly, and eccentrically, Hindu. The three major deities are not typically depicted in Balinese art, and they believe in a kind of chairman god above the three chief executives. But art and design are everywhere: most buildings are decorated with beautiful stonework, and stone and wood carvings are everywhere. A design ethos seems to imbue society, and it certainly imbues Ubud, in which every restaurant is beautifully and individually decorated. The number of temples is staggering. The temples are guarded by gruesome statutes, which scare off evil spirits. Most of these statues are clothed in sarongs.

Spirits also play an even large role in life here than they do in the Buddhist parts of southeast Asia. Each house has its Lararium, as in Vietnam and Thailand, but each premises puts out offerings to the spirits on to the pavement quite frequently - more than once a day it seems. You often see women weaving leaves into an intricate tray on to which rice, sweets and fags may be placed, and each is a lovely thing in itself, until trodden on or attacked by dogs.

In Malaysia, if you can't be bothered to accuse a political opponent of sodomy, just accuse him of insulting Islam! Then you don't even have to go through the hassle of putting on a trial.

The last Hindu culture I saw was in Vietnam, and it wasn't breathing. Between the eighth and fourteenth centuries AD, central and southern Vietnam was under the control of the Cham Empire. The Chams were Hindu, with close cultural links to Java, and the buildings they left behind are Hindu temples. They are usually built of red brick in boat-shaped towers. 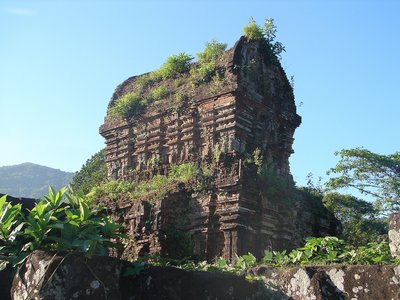 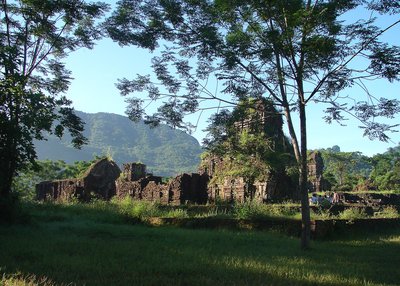 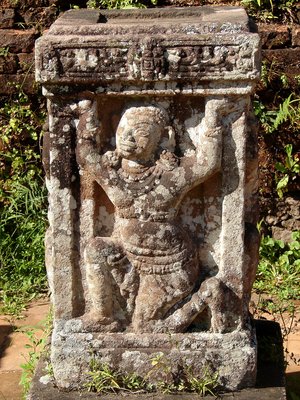 There are inscriptions in Sanskrit. 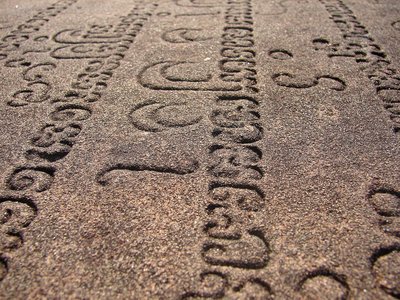 There are also a lot of lingas and yonis. Here I am at Mỹ Sơn by an impressive linga. 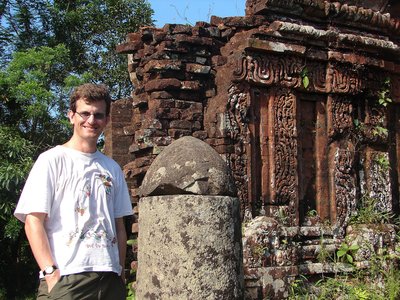 There is a good Cham museum in Ðànãng. There is an impressive pedestal from Mỹ Sơn, showing dancers, musicians, and hermits in caves. There is also a game of polo in relief.

It’s easy to approach the remains as those of a dead culture. The empire has disappeared – one of the northern Vietnamese kings eventually drove them out – but, like the Incas, the Chams themselves have not. There are still a million of them, mainly in southern Vietnam. Nowadays they are mostly Muslim but they still use some of the old sites for religious ceremonies.

From Hội An I visited Mỹ Sơn, one of the more extensive Cham ruins, which has structures dating from the eighth to the fourteenth centuries. I took an early bus at five in the morning, and a later tour back, thus staying on site for three hours or so. I thought I was being smart but actually the site is not very large, so I ended up looking at lizards and insects. 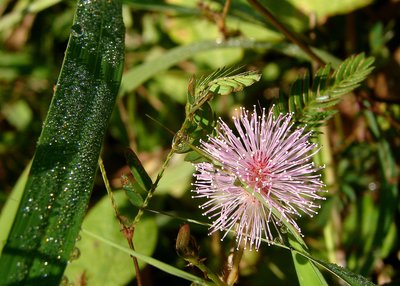 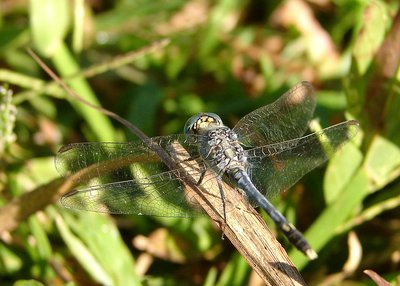 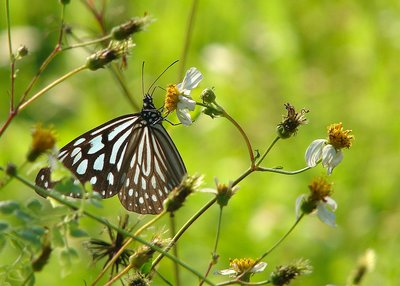 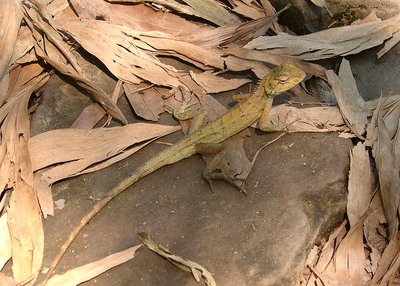 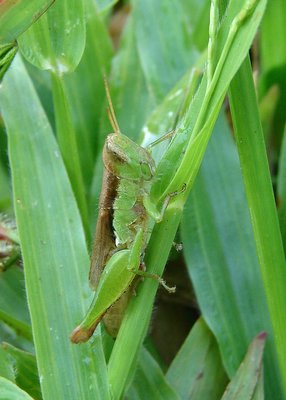 Once you’ve seen Machu Picchu or the Forums in Rome, it’s not awe-inspiring. I have to admit that the Cham artefacts do not wholly grab me – they are worth a detour, but not a holiday - although I do like the Kala and makara heads. 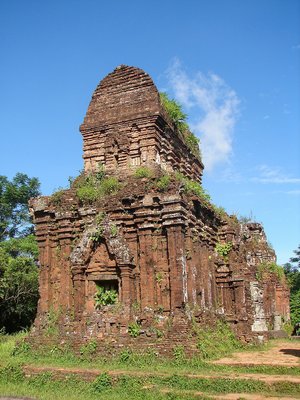 Mỹ Sơn may be extensive, but most of it is in a sad state. This is not the result of the inevitable depredations of time, but because there was fighting at Mỹ Sơn in the American War, and American helicopters deliberately bombed it to prevent the Viet Cong from using the site. A distinguished French professor of the Extreme Orient wrote to President Nixon to demand him to impeach his forces from deliberately destroying the site, and Nixon complied. 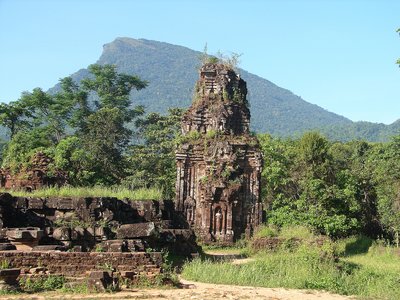 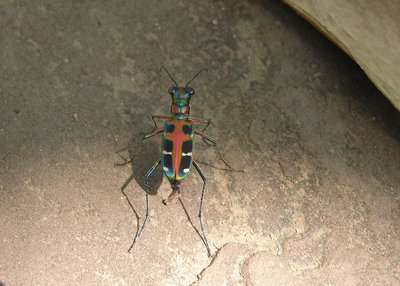 Posted by Wardsan 14:20 Archived in Vietnam