Well, yes, I am travelling solo, of course, and am getting tired of it. While it guarantees intelligent conversation, I am getting a bit Steppenwolf. The Indonesians are baffled by solo travel: where is your family?

But Solo is also where I am posting from, the former capital of one of the several kingdoms of central Java. Indeed I am posting from an Italian restaurant called O Solo Mio (geddit?). I am happy eating rice for every meal, but I miss cheese terribly, and so enter every Italian restaurant I see. Java, like Thailand, Malaysia and Vietnam, is rice country. They can grow two or three crops a year, year after year, without exhausting the soil, hence the very high population density. Running north-south between Borneo and Sulawesi, and between Bali and Lombok, is the Wallace Line. To the west the climate is wet, to the east dry and even arid. This is reflected in the flora and fauna and in the diet. East of Bali the staples are cassava and sago, which I am not particularly looking forward to. But I have discovered a wonderful way to eat cassava: sweetened, with coconut milk, as a pudding.

Like Yogyakarta, Solo is a royal city, founded by Pakubuwono II in 1742. The current king is Pakubuwono XIII (the family has even less imagination when it comes to names than the Danes), and he lives in a large kraton, or palace, in the middle of the city. Since the Dutch took over the king has had no political power and his duties are ceremonial. ‘Like your queen,’ said the other bloke on the guided tour, an Aussie. ‘Yours too, last time I heard.’ He is the oldest male of 36 children; he has an older sister but a Salic Law holds here. His father had six wives. Pakubuwono X had over thirty wives, and he did his duty, producing over a hundred children.

Another branch of the family has a palace in town. The museums have the same rhythm: reception pavilion with an ornate roof and lots of pillars; collection of gamelan sets, wayang, dancing gear, silver, gold and crystal. It's nice, but it's all the same, and one day I would like to be shown round by a guide who speaks English so I can ask questions.

Solo is also politically unstable. There were terrible riots here in 1998 after Suharto was forced out. And a cleric and suspected terrorist, Abu Bakr Ba’asyir, was arrested here in 2002. (Remember that both Jakarta and Bali have been bombed by Islamist groups.)

I went to Bandung because of an article I read in an in-flight magazine that said Bandung had 500 buildings from the 1920s and 1930s. (The reason most people come to Bandung is to shop at the outlet stores.) So I had a vision of a concentrated area of Art Deco. In reality it is a city of two million people – two Birminghams - and the buildings are spread out.

It is quite difficult to get around cities in this part of the world, and I still have not learned the limits: half a day spent walking around in the morning produces prostration in the afternoon; walking half a mile takes for ever because every street is a crowded market (among the junk on sale: a 2003 Italian football magazine in Indonesian with Roberto Baggio on the cover) and the pavements are not for walking on; the traffic is terrible and the transport takes you to places you do not want to go. So, for instance, I wanted to go and see the Bandung Institute of Technology, Soekarno’s alma mater, but although it was only a mile or two down the road it was a sizable expedition and I just could not be bothered.

I saw a few buildings in Art Deco or International Style but they are all in dismal condition and have aged badly. It may well be that I have missed the highlights. In reasonable condition is the Museum Konperensi, dedicated to the 1955 Africa-Asia Conference when Soekarno got to chat to Chou En Lai, Ho Chi Minh et al. 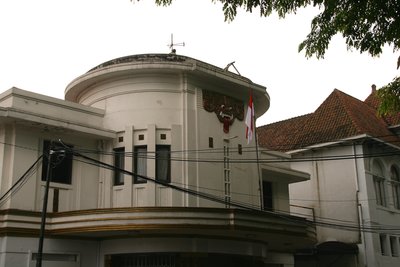 This is Caesar’s Palace. Inside was a computer sales fair. This looks like a Kala – a Hindu symbol in a very Muslim city. Javanese Islam is quite different from the Middle Eastern version. It acknowledges the reality of spirits, for example, and saints – just as people did in Java before Islamic came. 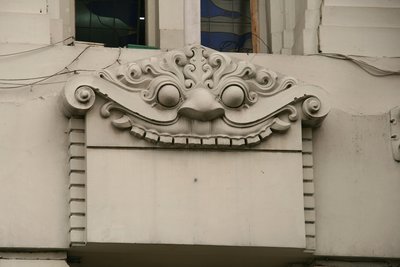 There are a lot of beggars in Bandung, many of whom are cripples born or made. This impinged on my consciousness because there are few beggars in Malaysia. Indonesian unemployment is officially 8%, but the economy is growing at about 7% a year and I doubt there is a structural excess supply of labour. But the urban population is increasing (30% or so of the population, much more in Java) and there is clearly no public safety net.

(There used to be a programme on British television called the Bandung File. It was for ‘minorities’. Being a child, I had no idea what the title meant, and I remember it as deadly serious and boring, because it was on just before something I wanted to watch like Captain Pugwash. I suspect it really was deadly boring though.)

I had a good day when I got out of Bandung. Bandung is 750 metres above sea level and the land to the north is higher. Judging by the food stalls they grow strawberries, pumpkins, maize, broccoli, cauliflowers, avocados. I took an angkot (a vintage Mitsubishi Colt minibus with two benches down the back) to Lembang and another angkot to a 2,000 metre high volcano called Pangkuban Perahu, or overturned boat. It is dormant, having last erupted in 1969, but there are a few fumaroles and sulphurous smells everywhere.

It is hugely touristy – memories of the Perfume Pagoda – and a snake of souvenir stalls lies along an arc of the crater. They are selling not quite as tatty tat as at the Perfume Pagoda: t-shirts, hats and scarves, miniature guitars, ashtrays made of a local palm, mineral rocks. 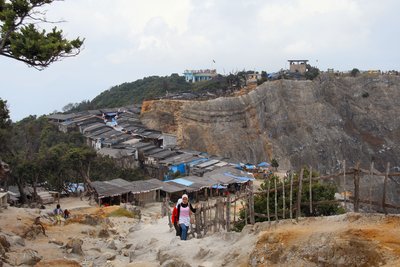 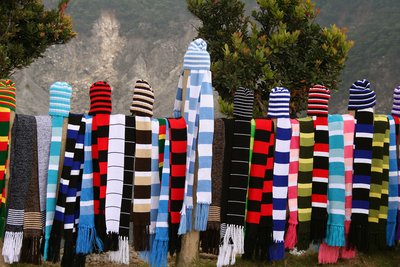 Most of the tourists are Indonesian, but there are others from Japan and Korea. The Japanese, among others, regard it as obligatory to make ‘V’ signs (‘peace’) when being photographed. 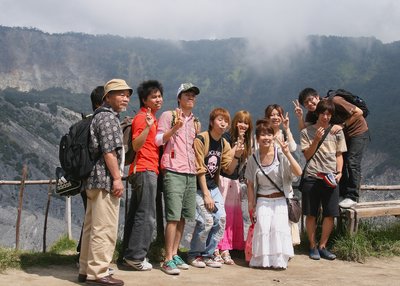 It is harmless, of course, but I find it offensively ovine. (I’m not keen on marches or wristbands ‘against poverty’, either. No-one is marching for poverty, actually, so the only interesting question is: what do you think should be done about it? Marching makes people feel smug while achieving nothing. Poverty, meanwhile, is reduced or increased at the WTO in Geneva, and in the capitals of the world. Its prime cause is kleptocracy and civil war. It is also, to a much lesser extent, affected by other countries’ trade policies, especially in agriculture and textiles. There is a trade deal available that would be good for most of Africa but, last I heard, it was blocked by China and India.)

My portrait pose is obviously much better. 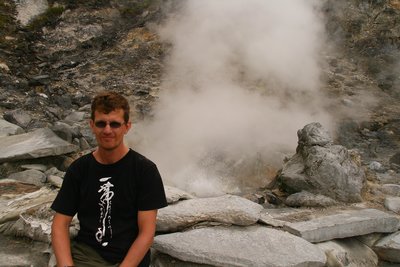 It has twelve craters, of which two are large: Kawah Ratu (queen crater) and Kawah Upas (poison crater). Kawah Ratu is about 700 metres across and 100m deep. It has a flat, sandy floor. 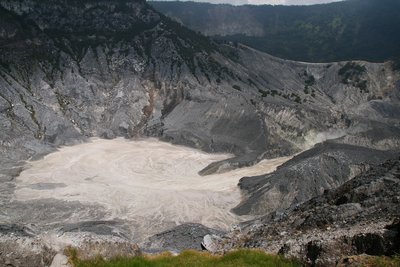 So does Kawah Upas. Lots of people have ignored its name to leave their mark on the floor. 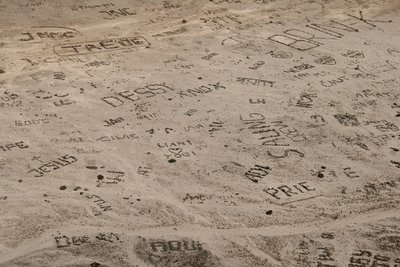 To walk around the craters you have to hire a guide, but I could not be bothered with that and so struck off on my own. This was perhaps not sensible, but not wholly irresponsible, since the path was obvious most of the time. The rim of Kawah Ratu is at roughly 1,800 metres and the peak is at only 2,000 metres, but it is a tricky and stressful climb up the path, coated yellow by, I think, hydrogen sulphide. (Incidentally, this coating is a sublimate: it has passed from the gaseous state to the solid without passing through the liquid.) 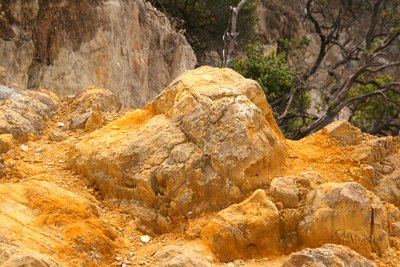 On the path I caught up with Arjen, a Dutch guy who went to school in Papua (his parents being missionaries) and speaks Indonesian. He is also the first person I have met in a month who has heard of Nottingham Forest. We visited another crater: Kawah Komas. This is a small area of pools, bubbling madly as carbon monoxide, carbon dioxide and sulphur dioxide come out of solution. Some are superheated to 120º C. Others are pleasantly warm. 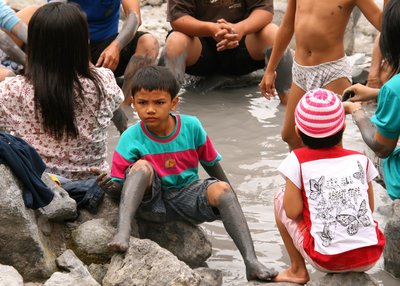 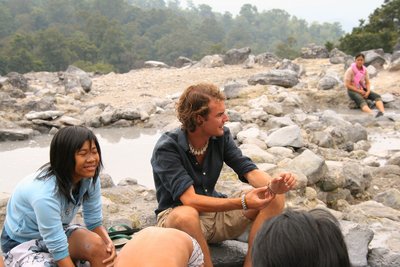 An enterprising guy nearby is selling eggs – for boiling in the waters – and bottled black mud, saying it is good for the skin. I doubt it, but tourists from Jakarta sitting in the pools are covering themselves with mud. 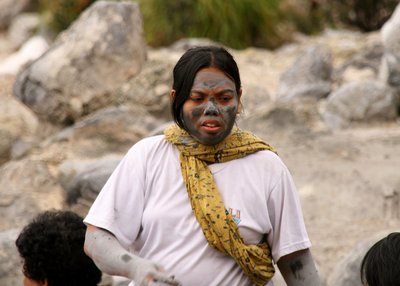 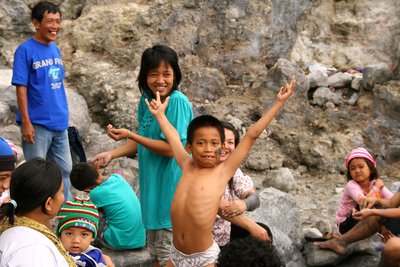 Afterwards I took ojeks (motorbike taxis) to Lembang and then to Miribaya. A fast-flowing river runs down a ravine from Miribaya to Dago, a northern suburb of Bandung. It is also a park and you can walk the six km or so between them. The path is paved with brick, and every couple of hundred yards an ojek rider offers you his services; in fact I saw no-one else walking. There were a couple of mildly diverting waterfalls, and a couple of tunnel systems built by the Dutch in 1919 and the Japanese in 1942. 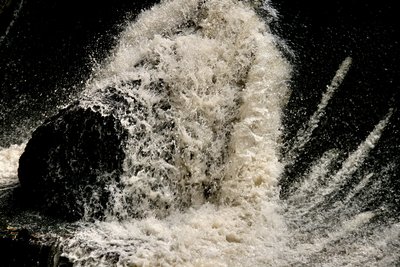 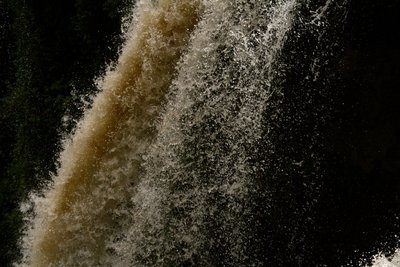 Posted by Wardsan 17:01 Archived in Indonesia