No, she went by herself

Kuala Terengganu, capital of the state of almost the same name, is another highly Islamic City. I liked it a lot more than Kota Bahru, although that may just be the effect of chance. The people seemed as friendly and helpful as anywhere in Malaysia.

I saw 23 mosques in one day. This is the central mosque. 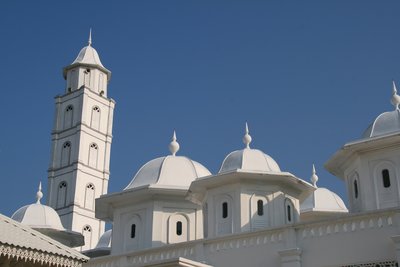 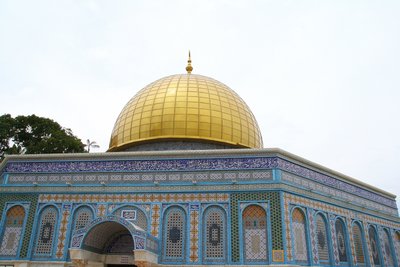 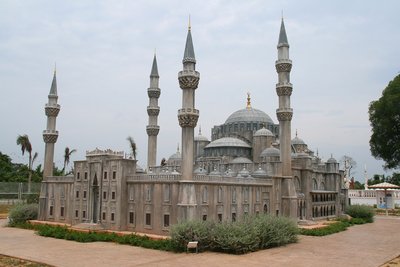 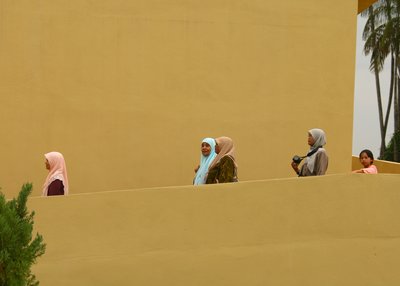 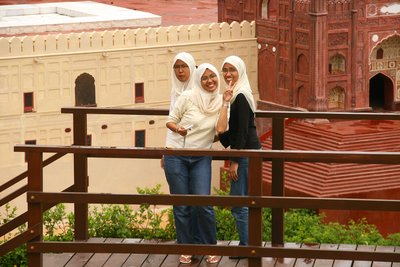 On the edge of the same island in the river is one of many new mosques in the state, the Masjid Kristal. Strangely, it is built to almost exactly the same design as St Basil’s in Red Square, except that it is covered in reflective glass panels. 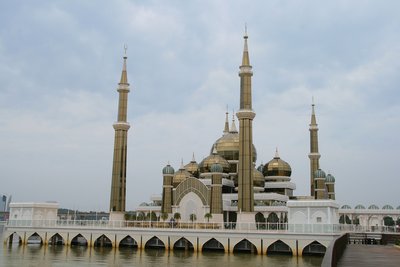 “Do you like it?” asked another tourist, a doctor from Singapore. “I love it”, I replied, of course. “Too gaudy”, he pronounced. I told him he sounded like a Protestant. 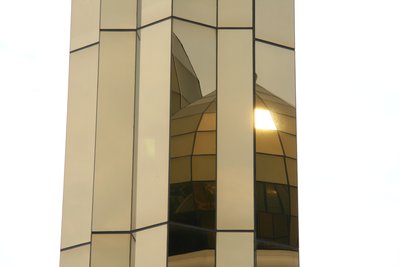 One thing that is wearing rather thin is the constant azans, or to be precise, the dawn call to to prayer. In Kuala Terengganu it began shortly after five, which seems a bit excessive, when dawn itself occurs around seven. From there I have added easting to the longitude, while subtracting an hour from the time zone, so dawn is earlier here. The azan began at twenty to five today. 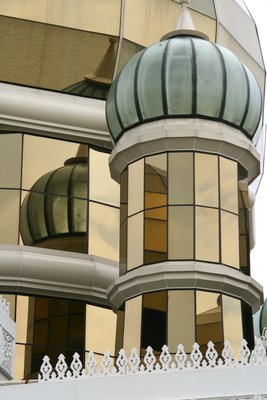 Yesterday I arrived head-first back in the third world. Hiring a bajaj or tuk-tuk from the station, it took forty-five minutes to get two kilometres. I had arrived at the butt-end of the carnival celebrating independence, which arrived for Indonesia on 17 August 1945.

Immediately noticeable, as in Vietnam, were the large numbers of motorbikes and scooters on the roads. In contrast to Vietnam, where everyone wears open Tommy or Jerry helmets, here most people wear large enclosed smoked-glass motorbike helmets. The tuk-tuk stalled in the middle of the main road. The driver got out, took the cushions off his seat, poured some petrol in the tank, pulled a cord as on an outboard motor, and off we putt-putted for a couple of minutes before it all began again. (They drive on the left, incidentally, which is a bit odd.)

And, as in Vietnam, the hassle begins: hawkers, hustlers, hookers, non-navigable pavements, impassable roads, motorcycles driving on the pavements, nutters screaming in the street (London has the last). Malaysia seems dull in comparison.

Dinner was fun, though: a stew of marinated unripe jackfruit; chicken marinated in soy sauce; beef skin stir-fried with beans, bay leaf and coriander seeds and coconut milk; marinated tofu and soyabean cake in palm ginger; hard boiled egg in shallot skin; some kind of crackers. A rijstaffel by any other name. A bit free with the sugar, but pretty good, so I’m returning to the same place, Lara Djonggrang, right now. (Java claims to make the best tofu in the world. I wouldn't boast about this.)

Today I took four forms of transport - taxi, bajaj, becak, train - and the first three all took me to the wrong destination. Wherever you go, people say 'Hello, Mister'. Here in the centre, it is because they live off tourists and want your attention. Elsewhere, it is because they are excited to see a white face and shout a little English. ("How are you?" invariably follows from the relatively fluent.) As in Vietnam, the kids just light up when you greet them back.

Take the populations of the UK, France, Italy, Spain and the Netherlands and it roughly equals that of Indonesia, the world’s fourth most populous country. Over half of the population lives on Java, which has a population density four times that of the UK.

In Malaysia you fly over jungle or palm plantation. Landing in Java, on the other hand – Krakatau just over the horizon to the west – we flew over small rectangular fields. Most were brown and some were smoking – burning rice stubble, I suppose. The landscape was largely urban and suburban, though, so it was not unlike flying over Surrey.

Two frightening books were on sale in an ordinary bookshop at the airport at KL: Future Forward: The Zionist Anglo-American War Cabal’s Global Agenda by Matthias Chang, a former political adviser to Mahathir. The book claims in all seriousness that Jews started both World Wars and that international finance is run by British Jews. The book is a bestseller.

Also on sale: The International Jew: The World’s Foremost Problem, published under the name of Henry Ford, who believed that the Lusitania was sunk at the behest of bankers to get the US into the First World War (but didn't write the book). The book contains a reprint of the Protocols of the Elders of Zion, which was published by Ford’s Dearborn Independent newspaper and read by Hitler. The latter are known throughout the western world – and were known in the 1920s - to be a particularly vile forgery, first published in Russia in 1903. In the Muslim world lots of ordinary people believe they are real.

As Chang shows, it is perfectly respectable around here to be rabidly anti-Semitic and to believe in global Jewish conspiracies.

Do people from Nornireland compete for the ‘Great Britain’ team at the Olympics? (They certainly did in 1972, when Mary Peters won.) If so, why is it not the UK team?

One thing I learnt at the Islamic Arts Museum in KL was the origin of the swirly bodhi-leaf pattern known as Paisley. Paisley became a centre for the production of Kashmir (cashmere) scarves, a craze for which spread the country in the nineteenth century.

It’s common to see a gecko in your room in Seasia, even more common to hear them in any open building. I generally like lizards, not least because of their insectivorous proclivities, but the most common geckos are rather hideous: snot-green, flat and rubbery, with bulbous pinkish phalanges. This fellow is a little less ugly. 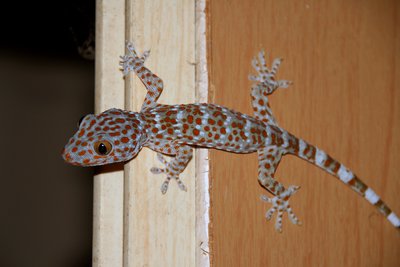 World Within was so badly proofread in a Malaysian edition as to be incomprehensible in parts. Tom Harrisson was a zoologist and anthropologist who became curator of the Sarawak Museum after the Second World War. During the war, as a member of SOE, he parachuted into the interior of Sarawak to set up a base and recruit local tribes to harass the occupying (and then retreating) Japanese forces. In the first part of the book he talks about the Kelabit people, and in the second he recounts the story of his war.

Posted by Wardsan 19:25 Archived in Indonesia