There are very few buildings over two hundred years old in Malaysia, and most of the surviving nineteenth century buildings are commercial premises. So Malaysia has very little indigenous Islamic architectural tradition to speak of. This gives architects a licence to pilfer from a broader tradition while creating a modern Malaysian Islamic architecture for purposes both religious and profane.

Pilfer is what the Masjid Negara does. It is a beautiful building, built in 1965. The architect was Datuk Baharuddin Kassim, who had studied at Manchester University and was an admirer of Le Corbusier, inter alios.

Its plan is along traditional lines, with a central dome of reinforced concrete, 60 metres wide, a huge verhandah, and an independent minaret. The bright blue ‘dome’, though, is not curved; it is a nearly-unfurled umbrella or a generalised Phillips screwdriver with 18 points. (Umbrellas are a symbol of royalty in this part of the world.) The mosque was refurbished in 1987; before that, the roof was pink. 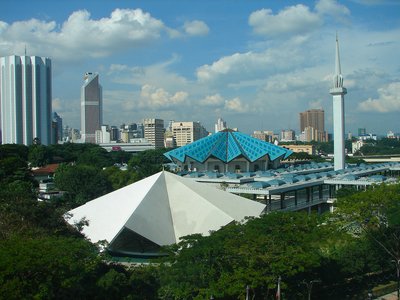 Inside it is decorated with blue Italian glass mosaic thulus khat calligraphy. There are triangular glass windows inscribed with the names of God and Mohammed. 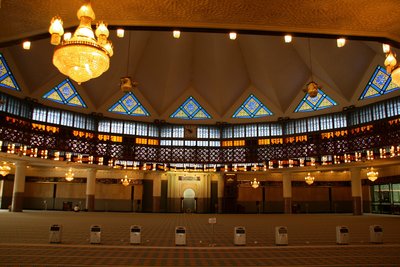 The mihrab has a Moorish horseshoe arch and the surrounding walls are decorated with Moroccan tiles. The inside wall of the mihrab has a muqarnas decoration. 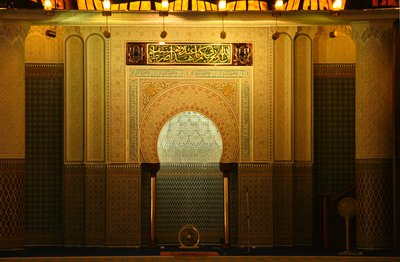 The minaret, 70 metres tall, is white, sharp and shaped like a furled umbrella. There is a lift for the muezzin. 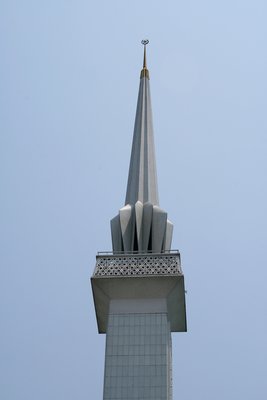 The mosque can accommodate 15,000 worshippers, the prayer hall itself 3,000. The verandah, where the other 12,000 would be, is decorated with blue and grey mosaic from Japan. The rosette of the dome is a copy of the rosette in the Blue Mosque.

The king worships here on state occasions. Malaysia is a constitutional monarchy, but an unusual one. Most of its states are headed by sultans. One of their number is the ‘king’. Each king is appointed for five years, after which another sultan gets the job.

The Islamic Arts Museum Malaysia, opposite the national mosque, is another very successful example of modern Islamic architecture. It opened ten years ago. It is well-known for the flat turquoise domes on the roof, copied from the Safavid Shah mosque in Isfahan, but it is also a very successful exhibition space, with 30,000 square metres and virtually no walls, so that light gets everywhere. 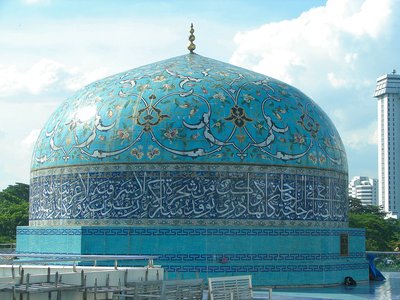 The interior, like that of many mosques, is cool, reflective marble. 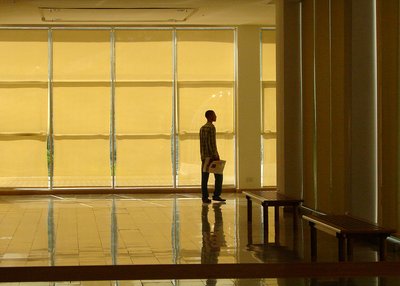 There is a permanent collection and a temporary exhibition space. There are sections on architecture, ceramics, silverware, textiles, calligraphy. To someone used to the British Museum collections, the collection is probably most notable for its Chinese items (and Malaysian, naturally), although its quality is extensive rather than intensive; the good stuff is at the Met and the British Museum (and probably the Louvre, or did we nick everything oriental after the Battle of the Nile?). 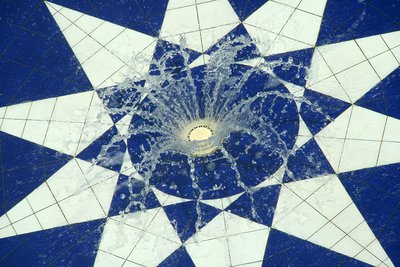 On my second visit an interesting temporary exhibition was entitled ‘Beyond Orientalism: How the West Was Won Over by Islamic Art’. And finally, the museum has an absolutely brilliant shop, stuffed with things I would like to own. This is the inside of one of the domes. 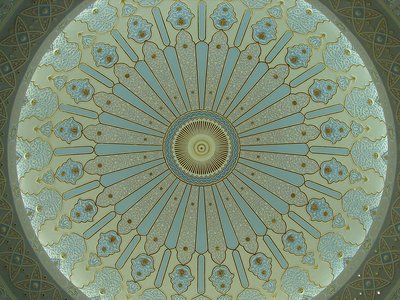 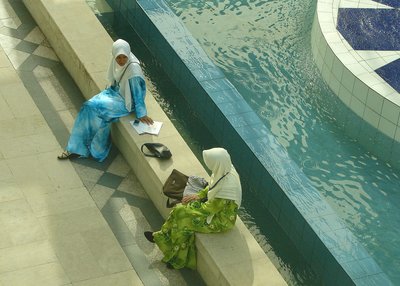 (Incidentally, KL, like so many cities in North America, is hostile to pedestrians. I walked only a short distance from KL Sentral to the museum, but it took me an hour and I had to cross motorways to do it.) 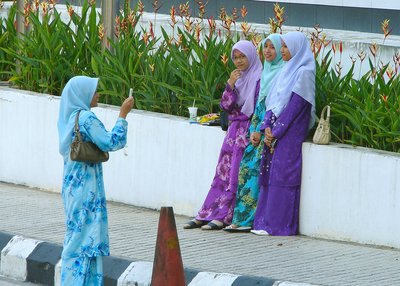 Before the Masjid Negara was built, the state mosque was the Masjid Jamek, built 99 years ago to a design by A B Hubbock. It is on the confluence of the two rivers that gives Kuala Lumpur its unpoetic name: Muddymouth. It is built of white stucco, with granite floors. It is a good place to sleep in the afternoon, if you’re a Muslim; infidels have no licence to enter. It has Mughal domes and a pair of minarets. 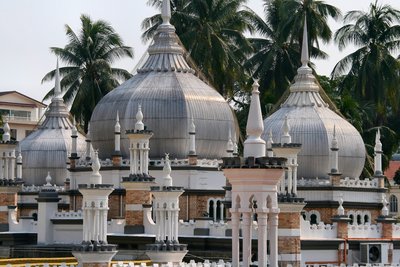 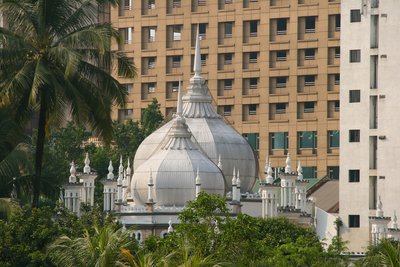 Hubbock, who had previously worked in India, was the official architect for Selangor State, so he got all the plum commissions. He designed the central railway station (built in 1910) and the railway company (KLT) headquarters (built in 1917). 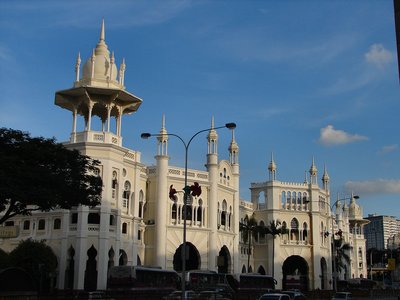 All the Hubbock buildings share a penchant for Mughal onion domes and arches, and they work well, particularly the station, which seems more distinguished than the railway headquarters by virtue of its albinism. 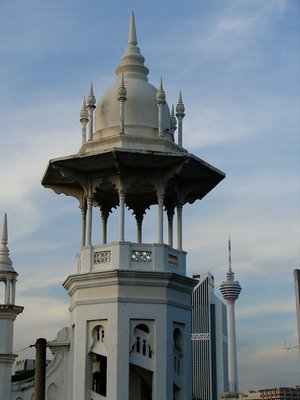 The station building is now a hotel. Inside, the station looks like a Victorian station in Britain (think of York or St Pancras).

There are also modern mosques in Kota Kinabalu. To the north of KK is the KK Mosque, and to the south is the Masjid Sabah, built in 1975. Malaysia’s second-biggest mosque, it’s an attractive grey and gold dome - not bad at all, although not a patch on the Masjid Negara. 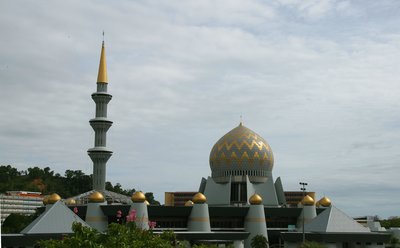 The two oldest mosques in Malaysia are thought to be 300 years old, although they could well be much older. I visited one, just south of Kota Bharu (the other, Masjid Kampong Kling, is in Melaka, and was built in 1748). It is called the Kampong Laut mosque, because that is where it used to be. It was moved to Nilam Puri in 1968 after a flood of the Kelantan river had caused the verandah of the mosque to be washed away.

Kampong Laut mosque is built without nails, but with wooden dowels. It was greatly expanded in the nineteenth century – the number of pillars rose from four to twenty - so it is difficult to know what might be original. 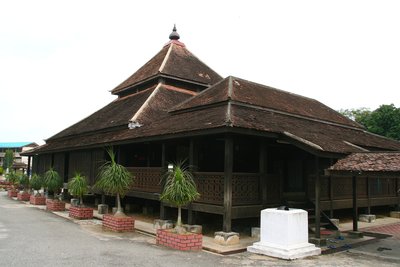 It’s made of cengal, a hard wood, and built on stilts. The design is said to be similar to the Masjid Jemak in Java, which was built in 1401. The story goes that it was built by Islamic scholars who used to travel between Champa, Pattani in Thailand, and Java. They were shipwrecked at Kampong Laut, and built a mosque to give thanks.

It does not look like a mosque. Nor need it; after all, the first mosque in Yathrib, the model for all others in the Arabian peninsula, was Mohammed’s house. And the first mosques in China were architecturally identical to Buddhist temples, although orientated along an east-west axis.

It looks like a large wooden Malay house. It has a double roof, with a gap for ventilation in the middle. Several of the palaces in KB have the same style; I do not know whether they are following a local style, like the mosque, or directly aping the mosque itself.

Back to KL, and the Dayabumi Complex is also a pretty building, faced with screens echoing the window-screens of traditional Islamic homes, decorated with eight-pointed stars. (In the foreground is Merdeka Square and the tallest flagpole in the world.) 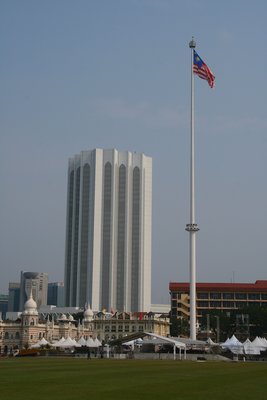 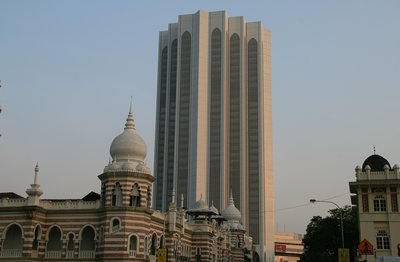 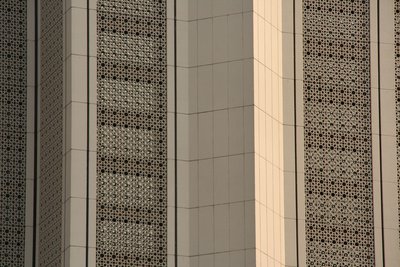 (Less successful are the minangkabau buffalo horns topping modern blocks all over Sabah. It’s banal; sticking a couple of horns on the top doesn’t change the fact that it’s a modern concrete block.)

The KL tower, a telecommunications tower owned by Telekom Malaysia, is 421 metres tall including the antenna. The observation platform is at 271 metres, and from there you can see the whole city. 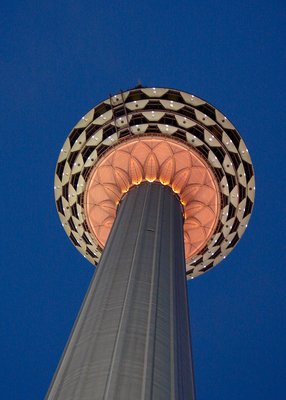 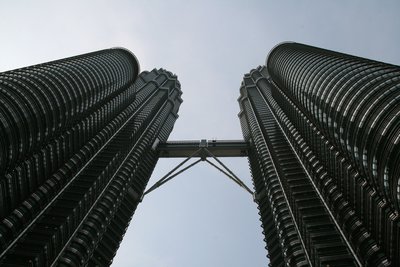 The top floors are not open to the public, but the double-decker bridge connecting the two towers is. The problem is that access is free, so, inevitably the number of people wanting to go up exceeds the spaces available. This leads to what economists call non-price rationing and others call a queue or line; or in most parts of the world, a scrum. 1,700 permits become available at nine each morning. I arrived at 8.30 to find an entire hall filled with several hundred people queuing. Over an hour later, I had a ticket, timed for 1.30 pm. So I had to return at lunchtime, which severely restricted what I could do with the day. The number of hours wasted is in the thousands every day. Far more efficient would be to charge a price to visit that would allow those willing to pay the price to visit the skybridge immediately. 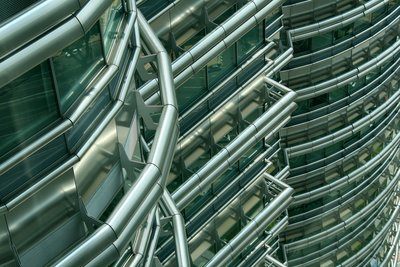 Before visiting the skybridge, you must endure a tedious 3D propaganda video for Petronas. It contains all the usual corporate claptrap, implying that every employee of Petronas is a hero, and oil is green. It manages to claim that the towers “inspire children to realise their potential and take on the world”. Not likely.

Then you go up in a service lift to the 41st floor, at 170 metres (100m below the observation deck of KL Tower), and have ten minutes at the connecting bridge. You can’t see some interesting areas of Kuala Lumpur because one of the towers is in the way, and I’ve been to the 44th floor even in London of all places. So it’s okay, but nothing special. If you want to go, use the market mechanism properly: pay someone to queue for you and stay in bed. 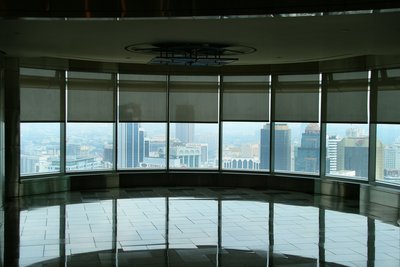 The Petronas Towers, designed by Cesar Pelli, are worth a visit in any case because they are surely the most distinguished skyscrapers of the modern era. Their elevation is unique and pleasing, avoiding the dull loudspeakerness of most skyscrapers, and I have admired the plan ever since I first saw it when they were built. Take a square; superimpose another of the same size, rotated by 45 degrees; and you get an eight-pointed star (a rub el hizb). In each of the eight involutions, add the arc of a smaller circle as infill. It is a beautiful, recognisably Islamic plan, which also achieves a commercially acceptable ratio of office space to wall. 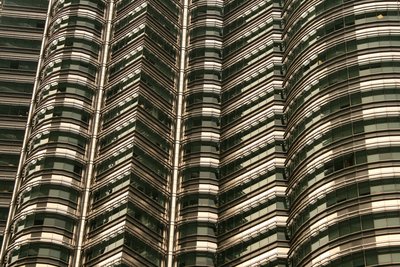 Another reason to visit the Petronas Towers is the 40-acre shopping centre underneath it, Suria KLCC. 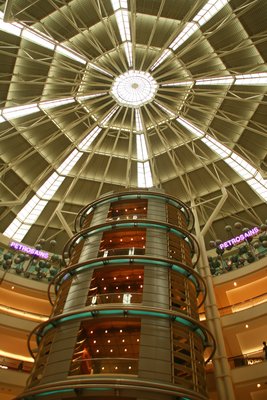 Shopping centres are very important in Malaysia (nearly as important as in Singapore, essentially a large mall where shopping is the state religion); a large part of life is lived there. They are where people go of an evening, not just to shop but to meet, eat, see a film and drink something sugary. Some are very impressive, far better than anything I have seen in England: Suria KLCC, Pavilion, Times Square. It is easy to lose a whole day at any of these, even without actually shopping. At Times Square there is an indoor amusement park with a rollercoaster. You go upside down three times in the space of 800 metres. 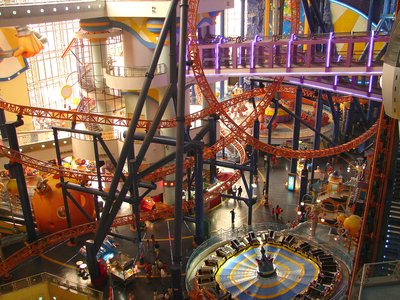 Posted by Wardsan 21:31 Archived in Malaysia