I'm posting from Kota Bahru, just south of the Thai-Malaysian border. It is the capital of Kelantan, once one of the poorer states in the Federation, now the richest - oil. There are some palaces in the suburbs but the city itself does not display its wealth. In the first few hours here it has been dispiritingly wet and dry: wet, because it has rained all the time; dry, because this is the most Muslim state in Malaysia, and few places sell alcohol. Indeed, it calls itself Kota Bahru Islamic City, if I have got it right, which must make the Chinese feel welcome.

Most restaurants in Malaysia do not serve pork. (The Chinese, who can’t live without it, are an exception.) Where a pork-like substance is necessary, ‘chicken ham’ and ‘beef bacon’ are substituted instead. So Burger King does not serve bacon, and the Bacon Double Cheeseburger is just a BK Double Cheeseburger. And so the greatest invention in the history of fast food is lost to Malaysia.

Similarly, the only place to find beer in KB is in the Chinese restaurants, so I shall be eating Chinese for a while. I crave whisky or brandy, simply because I know I can't find any.

The only accommodation in Kinabalu National Park is run by Sutera Sanctuary Lodges, who charge monopoly prices. I visited their offices and, upon being told that the accommodation up the mountain was full until 31 August, paid through the nose to obtain a place through my guesthouse. I shopped in a hurry: two jackets, gloves, a hat, long johns. One of the jackets was a steal at £4. None of these is usually necessary in the tropics, but, at 4,095 metres on the most recent geodesic, the summit of Kinabalu is cold. (A reasonable rule of thumb is to subtract ten degrees Celsius for every thousand metres in height.)

The following day, having inadvertently set my alarm clock for 6 pm, I overslept and packed in a panic. Thus my rucksack contained three books, a change of trousers, sandals and a lens cleaning kit, but no Ventolin, hat or socks. It weighed around fifteen kilos, which I regretted for all fifteen hours or so of the climb. 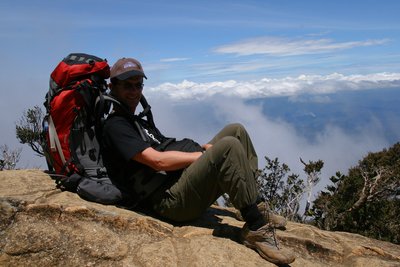 Although the path up the mountain is clear – 30,000 attempt the climb each year, and much of the route is stepped, fenced or roped – a guide is obligatory. At Park HQ I am duly assigned a guide, Azuwan. He is even older than me, and he climbs the mountain but twice a week; some of the guides climb it thrice, with one day off. Some have climbed it 5,000 times, which must be very dull. 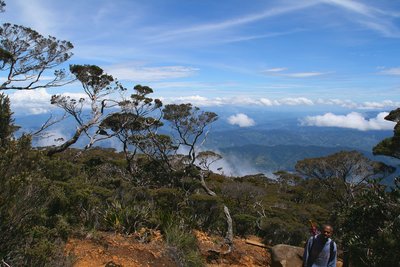 I was expecting to be in a group, but actually I’m on my own at first, which is boring. Asuwan is not over-talkative, and nor am I for that matter. But there are a number of covered rest stations on the route, and after the first I ended up in a group with others from the UK or thereabouts: Anne, Helen and Jeremy.

We walk up through low montane (oak-laurel) forest then high montane and then the trees become stunted and rhododendrons and mosses start to take over. By that time we are above the sparse clouds. Kinabalu is home to a huge number of plant species, many of which are endemic. The park is thought to host over 1,000 species of orchid and 600 species of fern. 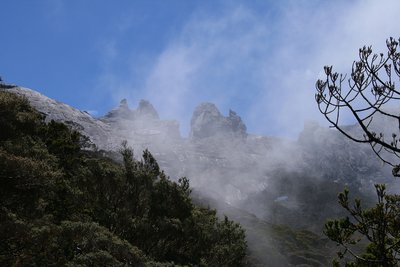 Kinabalu is also known for its pitcher plants (genus Nepenthes), which eat insects. Unlike Venus fly-traps, say, they are passively carnivorous; that is, they do not move to catch their prey. They merely emit an alluring scent. Their leaf-tips fuse to form a tall cup or ewer. The lip of the ewer is slippery, so that any insect that lands on it falls in, there to be broken down in a pool of digestive fluid. The fluid only analyses the dead; frogs and tadpoles can live in it comfortably.

Each pitcher has a lid to prevent the abundant rainwater from diluting the contents of the pitcher. The largest pitcher plant, N. rajah, is reputed to have a capacity of over three litres.

They are climbers. The pitcher forms on the floor, where it is fat. As the tendrils climb, the pitcher becomes elongated and bottom-heavy, so that it remains vertical.

Above 2,500 metres we saw a few pitchers. The first, N. villosa, is fairly small. 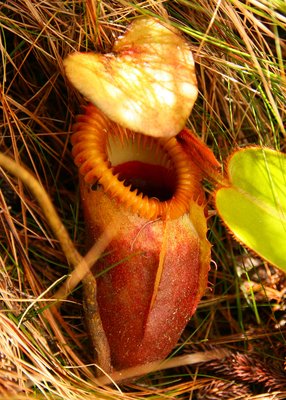 The others were N. kinabaluensis, the second-biggest plant. 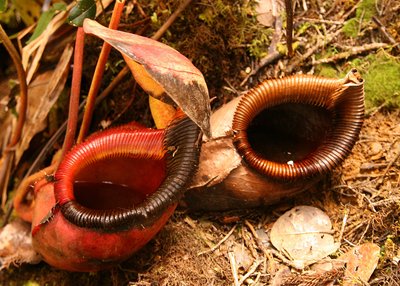 There are also a fair number of animals in the park, but the trail is busy, and most keep out of the way. An exception is the mendicant ground squirrels loitering at rest stations. 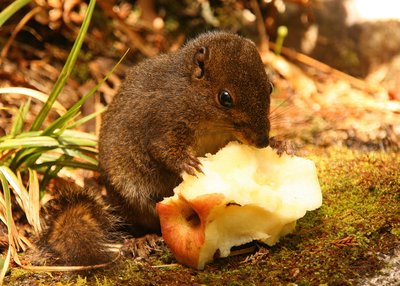 The walk to Laban Ratah, where climbers spend the night, took four and a half hours. Laban Ratah perches at 3,270 metres above sea level. Above 3,000 or so I started to notice the poverty of the air. I’ve walked to 4,200 before, on the Inca Trail twenty years ago. There I only perceived the thin air above 3,800 metres or so; but then we had acclimatised in Cusco. Here, most people come from Kota Kinabalu, on the sea. Some get altitude sickness. I just got a headache, which is very common. Helen vomited a couple of times.

But overall the climb is not hard, and certainly not technical, and the views are wonderful. We are vastly fortunate with the weather: not a drop of rain over the two days. Annual rainfall in the park averages 4,000 mm.

When we arrive in mid-afternoon the thermometer reads 16 degrees. When I retire – shortly after seven – it reads 9 degrees, but the wind takes it below freezing. The dormitory has no heating, but three layers of clothes and two blankets are enough. 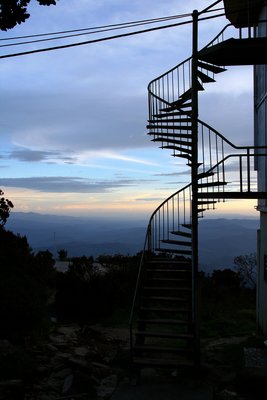 I arrange to meet Azuwan at 2.30 am, after breakfast, but oversleep again. No breakfast, and a rush: not a good start to a climb. It’s dark, of course – that’s the point – but there is a snake of torch-bearing pilgrims to follow. Progress is very slow, which is not inconvenient; there doesn’t seem to be much air around. It’s no big deal, you just have to go slowly. Soon we are above the tree line, and we ascend, bent forward, over slippery granite. The trail is steep. Much of the time it is necessary to hold on to fixed ropes; some of the time you’re on all fours.

It takes much longer than I had expected – 160 minutes – to trudge to the peak. In the dark, there is no view to divert attention from corporeal complaints. As with most climbs, peak fitness is not required, just a modicum of willpower. In the rain, though, the mental demands would be significant.

Eventually, just as dawn breaks, I achieve the summit, where twenty or so climbers already huddle like wintering penguins. Soon there are eighty or a hundred. Most people who attempt the climb make it, the only exceptions those in heels, those hit by altitude sickness and the wobbliest of lardbutts. 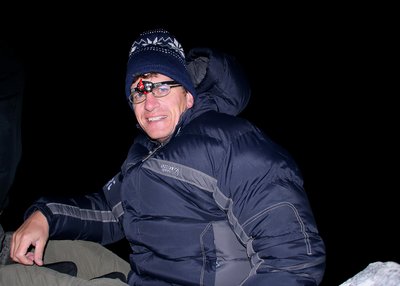 Azuwan prudently waits below, in the lee of a strong and icy wind. And soon I realise why: after a couple of fruitless snaps, I lose the use of my gloved fingers. It is perishingly cold, and there is none of the elation usually seen at a summit. Most look glum. Few can stand it for long.

However, fifty metres below the peak and out of the wind, the view is easy to appreciate, and as the sun comes up the view improves. There even seems to be more oxygen around. Just across the way from Low’s Peak is St John’s peak, named after the unfortunate who first ascended the mountain to find himself at a local maximum, a tragic metre lower than the true peak. Between the two peaks, diving near-vertically, is Low’s Gully, inaccessible outside El Niño years. 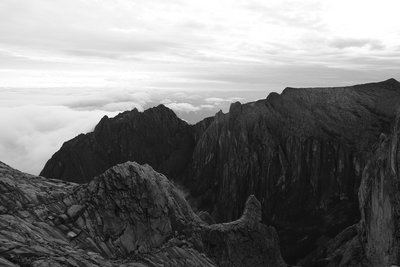 On the left as we descend, the Abdul Rahman peak, the Ugly Sister and the Donkey’s Ears. 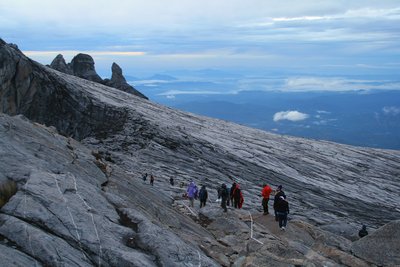 On the right, South Peak, an oddly familiar view. It’s on the one ringgit note. (All the other notes carry proud but ugly pictures of industrial Malaysia, rivalling the euro notes for uninspired ugliness.) 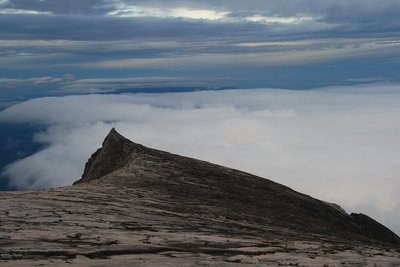 Climbing in the darkness to see the sun rise seems to me a mistake: much better to walk up in warmer daylight and enjoy the scenery all the way. The entire head of the mountain is unearthly: bald granite, scoured long ago by glaciers. I have never been anywhere like it; it’s harshly beautiful. 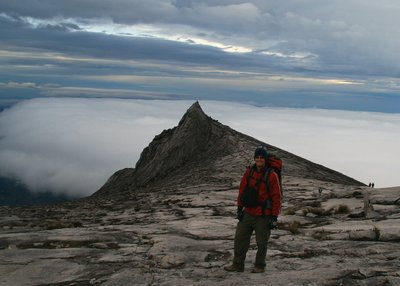 Unlike any other descent in my experience, going down took as long as going up. We stopped for an hour or so for another breakfast at Laban Ratah, but all in all we were on the move for around eleven hours on the second day.

We have all been warned that the descent is as bad as the climb, but it is much worse. The descent from Laban Ratah covers six km horizontally and 1,900 m vertically, and takes nearly five hours. Well before the end of it, with jelly quads, we are walking like puppets or drunks. That’s when it’s better to be in a group.

And at the end of it, as I mentioned in the last post, I’m not sure what the point of it was. I can feel a mild pride in having climbed it; but I’ve done that sort of thing before and am well acquainted with my mental and physical strengths and weaknesses. You’re not supposed to say this, but, company excepted, I think I might have enjoyed it more if I had stayed on the lower slopes looking at bugs and enjoying the scenery.

Posted by Wardsan 21:47 Archived in Malaysia