I’m just back from climbing Mount Kinabalu, at 4,095 metres the highest mountain in, well, all of Borneo actually. (That's not such a mean statistic: Borneo is the third-largest island.) There are three higher mountains in southeast Asia.

The ascent was hard, the descent harder. I have no idea why I did this thing; I thought I’d grown out of peak-bagging. Today I am stiff as a stiff and have a horror of stairs.

In Semporna I stayed at the Dragon Inn, also called the Floating Hotel. It doesn’t float, but it is built on barnacle-encrusted stilts in the shallow sea. (Barnacles are crustaceans, by the way, not molluscs. The only way to tell is to observe their larvae.) It is in effect a small water village, of which there are many in Sabah. Some are quite large and have their own mosques.

It is entertaining to take a shower and watch the water drain through the gaps in the planks into the sea. My room was at the end of a pier and kingfishers hung around and argued noisily. 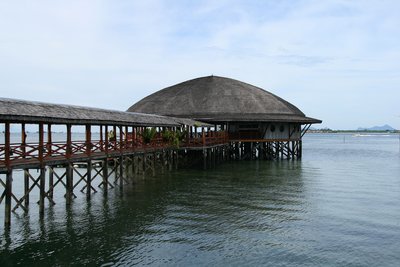 In the shallow water below, clouds of needlefish. 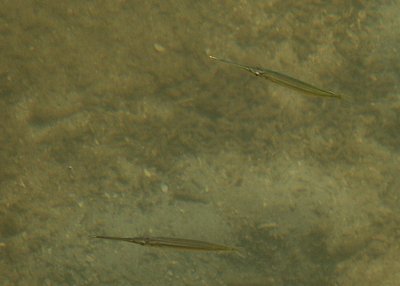 And every now and again the call to prayer floats over the water. 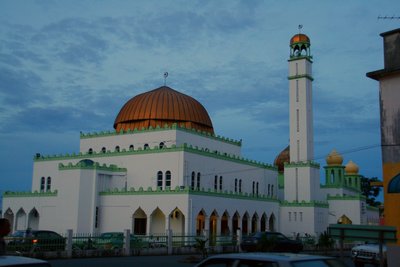 The seafood is fresh. 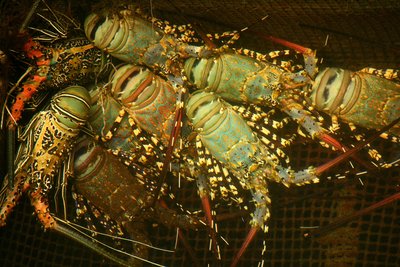 While in Semporna I dived in the Celebes Sea at Sibuan, Mabul, and twice at Sipadan, while qualifying as an advanced open water diver. That doesn’t make me a good diver. 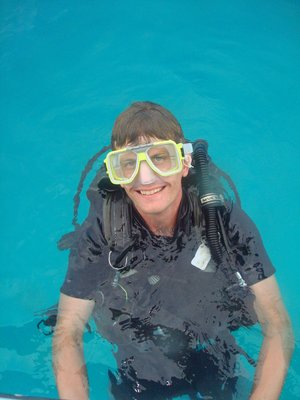 The weather was not great, and excepting Sibuan the visibility was not very good. But the diversity of marine life at Mabul and Sipadan compensated. 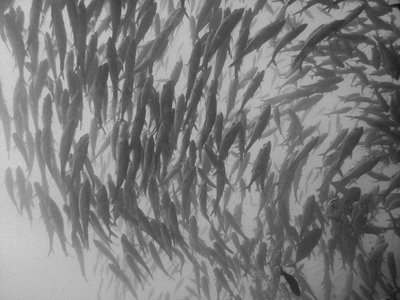 The frogfish are also known as anglerfish. They are usually immobile and always hideous. 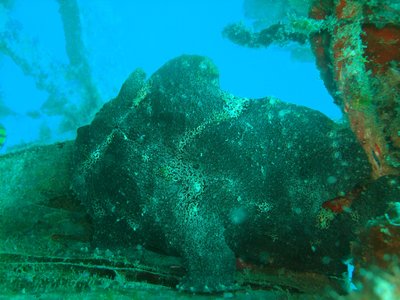 The red and white common lionfish has large spiny dorsal and pectoral fins, and some of the spines are venomous. 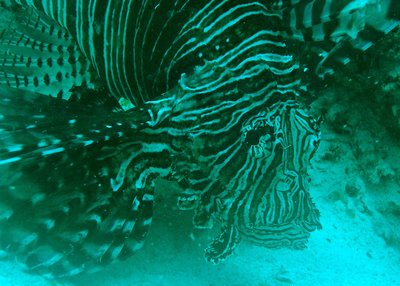 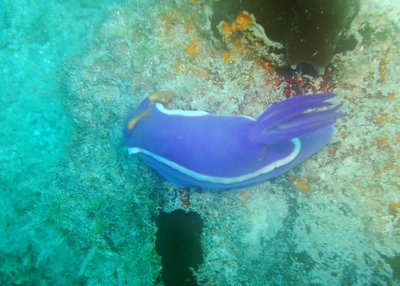 At Awas we saw a cuttlefish, cleaner shrimp, another lionfish, a hermit crab and a black-finned snake eel half-buried in the sand. 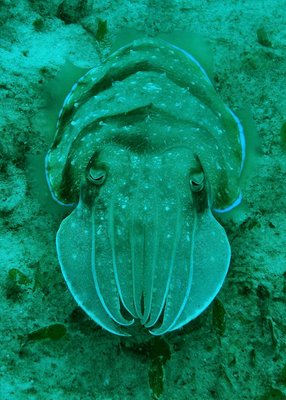 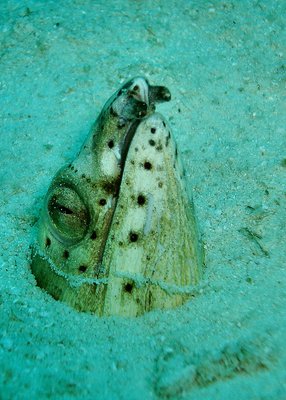 The cleaner shrimp run the crustacean equivalent of a car wash. Fish stop at the station and the shrimp emerge to pick parasites off them. Groupers love them. (Cleaners are essential: when the cleaner wrasse disappear, so do the fish on the reef, presumably because the incidence of disease becomes too great.) So we stopped off for a manicure and some free dental hygiene. 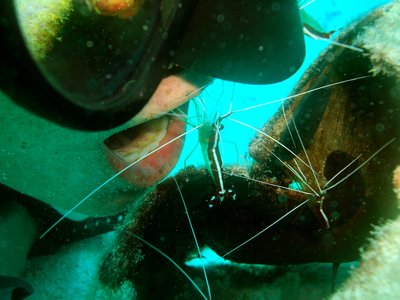 Groupers, incidentally, are born female. They become male later in life. A bit like the ancient Greeks.

We also saw a couple of green turtles, a moray eel and a great barracuda (huge), and the deeply weird crocodile flathead. The last sits latex-lipped on the sandy floor and watches the world with swivelling bulbous eyes. 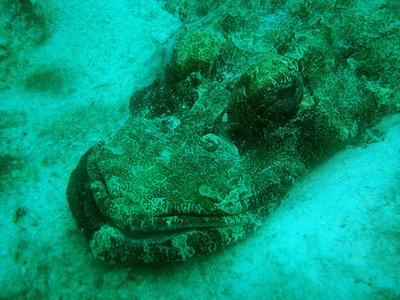 At Froggy Lair we saw another crocodile fish, a green turtle and a hawksbill turtle. Everywhere we saw, among others, angelfish, butterflyfish, snappers and seaperch, squirrelfish, boxfish, goatfish, filefish, triggerfish, surgeonfish, groupers, pufferfish, bannerfish, razorfish, trumpetfish, unicornfish, spadefish, parrotfish. Among invertebrates, nudibranchs, sea squirts, sponges, anemones, hydroids, echinoderms and corals soft and hard. Reefs host an abundance and diversity of animal species that even rainforests cannot match. This is the xanthic (yellow) form of a flutemouth. 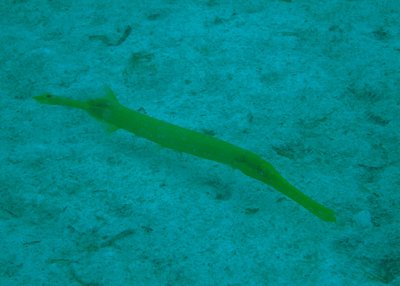 I rented a camera for the day, which is why I have photos of some of these. It’s not easy to float absolutely motionless: when taking a photo I naturally hold my breath to concentrate, and if you do this underwater you shoot upwards. I also did a fish identification option on the course, but still haven’t a clue what I am seeing most of the time. This is but one of many examples. [Actually I think it's a juvenile snapper.] 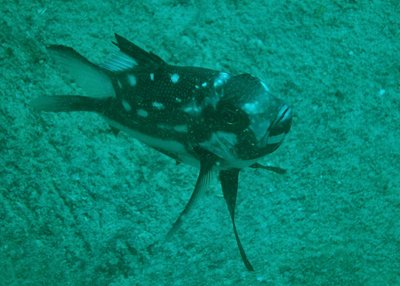 This, however, is a black-saddled toby. 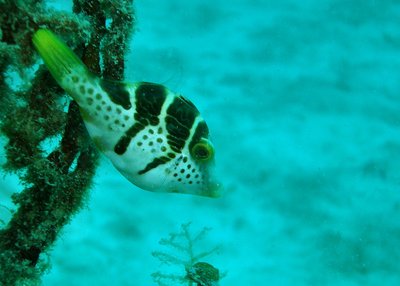 Sipadan, Malaysia’s only true oceanic island, rises 600 metres vertically from the ocean floor. Mushroom-shaped, it is topped with coral reefs. So you dive to the sand at five metres or so, and then step off into an abysm that is for practical purposes endless. It’s quite a thrill: like stepping out of a plane or abseiling over a cliff, except with neutral buoyancy. Looking up the wall from the deep, past schools of fish, is also a buzz.

Sipadan is well known for the abundance of larger creatures: turtles, barracuda and sharks. Numbers of divers are limited and you have to pay for a permit. 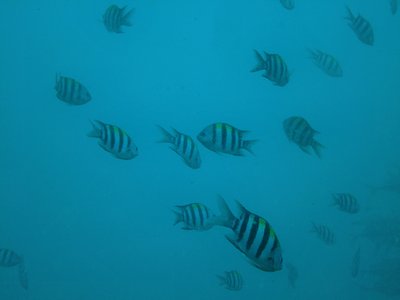 At Sipadan we dived to 30 metres and used a lot of air to see absolutely nothing. At Barracuda Point, where there are strong currents, we did a drift dive and saw a white-tipped shark, about seven feet long, several green and hawksbill turtles, and an enormous school of chevron barracuda, each a four-foot-long dead-eyed predator. As I held on to a rock against the current, the barracuda swam very slowly past and just above me against the current, barely moving a muscle. The closest came within about six feet, and it was very exciting. I stopped trying to count; there were several hundred of them.

On the last dive we saw a very large pufferfish, some comical unicornfish, and huge numbers of turtles, some very large. Sipadan is said to have one of the largest populations of turtles in the world. Unlike at Mabul, they seem to be used to divers, and you can get close to them. They find themselves turtle-sized niches in the cliff wall and lie there to rest. Green turtles are larger; they reach a respectable speed simply by waving their forelimbs very slowly in the water.

This is a hawksbill. 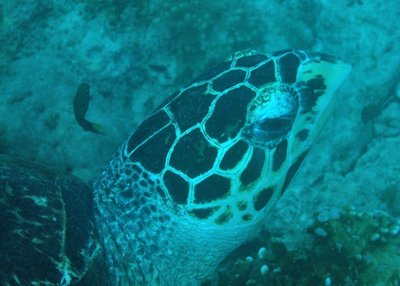 We also saw three white-tipped sharks. Two dozed on the sand. White-tips can pump water over their gills while stationary.

Most of Sipadan is a military base, off limits to civilians. On the short stretch of accessible beach the sand is made of shells and lumps of dead coral. The shells move; they are occupied by small hermit crabs. Their left front claws are bigger than their right. If you pick them up they will eventually come partly out of the shell and pick at your fingers. If the front claw grasps the epidermis, it is difficult to get them off.

They have to switch shells as they get bigger; perhaps they will grow into stalk-eyed monsters like this. 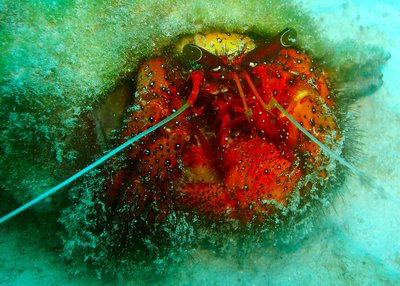 While we had a packed lunch on the island a soldier in fatigues struggled to stay awake next to his mounted machine gun. The soldiers may be there to protect against pirates; some divers were kidnapped from Sipadan a few years ago, and there have always been pirates in these waters. 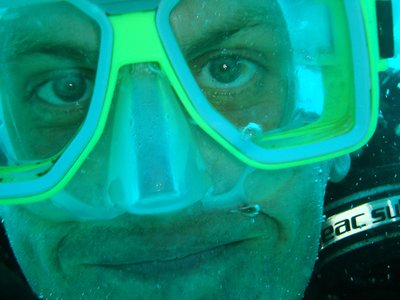 Posted by Wardsan 17:37 Archived in Malaysia