Sabah is even more ethnically mixed than peninsular Malaysia. No ethnic group makes up more than a fifth of the population. Just largest are the Kadazan Dusun, at 18%; most of them converted to Christianity in the 1930s, when Sabah was run by the British North Borneo Corporation. The next are Bajau at 17%. There are also Chinese, Filipino, Malay, Murut... The most powerful political party is run by Christian Kadazans, and it has often been a thorn in the side of the pro-Malay and pro-Islamic federal government.

Sandakan is more Muslim. The mu’adhdhin’s amplified allahu akbar rings out across town; most women are in headscarves. Yet at the same time illegal Filipino immigrants hugely outnumber Malaysians here. (The Philippines are 17 miles away.) Contrary to expectation, the Malaysians are largely Christian and the immigrants from the Philippines – one of the most populous Christian nations – are Muslim. (So the federal government is not keen to remove them.)

The Night Safari at Singapore Zoo is not a safari, but the animals are in fenceless enclosures. There is a ‘tram’ ride that gives the impression (for children) that the animals are wandering free. (Actually it’s a train, since a train does not need a track.) But the commentary gives little information and is probably not worth it unless you are a child. The trip did nothing to help the Singapore money-dysentery. I went there to play with my new camera and got no usable pictures at all of animals, flash being understandably prohibited.

The best things were the enclosed bat tent - huge flying foxes roosting right above; smaller bats flying all around - and the howling noises. I hadn’t seen hyenas before either.

The only usable snap was of a hut at the entrance. 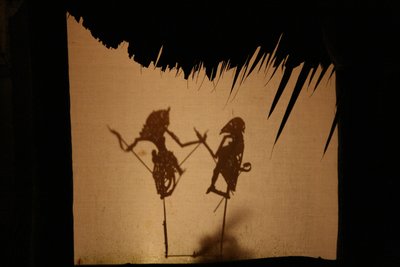 I believe they're kulits, puppets made of dried buffalo skin, used in wayang kulit.

Since I started travelling I've been getting a lot of spam. A lot of it is headed ‘you are moron’. A strange message. Am I right not to take it personally?

Agnes Keith was interned with her son in a prisoner of war camp near Sandakan during the Japanese occupation. (The Borneo Death March, which killed more Australians than the Burma railway, also began in Sandakan.) She kept a diary and hid it piecemeal in tin cans buried outside the hut, and in the linings of the toys she made for her son. The diary was published after the war as And Three Came Back, and was made into a film starring Claudette Colbert.

She lived in Sandakan for nearly twenty years with her husband Harry Keith, who was Conservator of Forests for North Borneo. They lived in a beautiful wooden house on the hill, which was destroyed in the war and then rebuilt to the same design afterwards. It was renovated and turned into a museum in the 1990s. I had never heard of the couple until a few days ago, but I enjoyed the house and the photos.

Anyhow Agnes Keith complained that she was given endless amounts of an ‘inedible’ spinach-like substance called kang kong. It’s morning glory, I believe, and I eat it whenever I can get hold of it. No doubt she didn’t get to eat it with sambal and garlic. I feel in danger of scurvy here because the typical meal is chicken and rice or beef and rice.

I'm actually in Sepilok today. I've been seeing orang utans for the last couple of days, fulfilling a decades-old desire. I phoned ahead and booked a place at the Sepilok Jungle Resort for three nights. The man on the phone went so far as to get me to spell my name. Then he went and wrote it on bog roll or tattooed it on his arse or something - anywhere but in the hotel diary. They gave me a room for a night and didn't apologise. I've moved to the Sepilok B&B where the proprietor actually wrote my name in the book when I called and has been sincerely friendly since I arrived, and where my room is better than that at the Jungle Resort at about half the price.

Posted by Wardsan 08:16 Archived in Malaysia