I'm posting from Melaka, the old trading town that dominates the narrowest point of the Melaka Straits. The last couple of days have been hideously hot, but today promises showery relief. I feel rather bored of travelling today, but we're only here for a day so I'll head off shortly to a couple of museums instead of just sitting down and reading as I'd prefer.

We bussed yesterday from Kuala Lumpur, where we spent two nights. KL was hot and humid. It possesses fifty or more buildings above 25 storeys and more outlets of US chain stores than London does. So it's probably like Atlanta, except more muslim: most women cover their heads and quite a few are in burkas.

Before KL we spent a couple of nights in the Cameron Highlands, named after William Cameron, who discovered the plateau while surveying in the late nineteenth century. (While the coast of the peninsula has been well surveyed for centuries, most of the interior was only surveyed in the twentieth century.) It's 1,500 metres above sea level, and its specialities are tea and strawberries. This makes afternoon tea and scones a possibility, and they are on offer; I indulged gladly in a tea room that took me straight back to Yorkshire. A lot of other plants are grown under polythene; the area is an important source of agricultural produce for Malaysia. 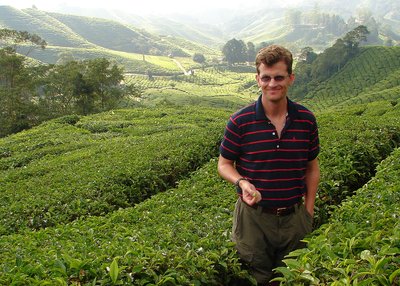 In the Highlands we visited a tea plantation run by the Boh company, which is still owned by a British family. 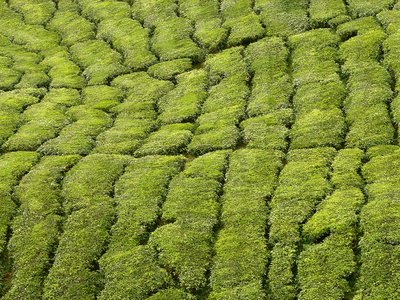 In the lowlands the picking is now largely automated, but in the highlands the leaves are still picked by hand. The pickers come from Indonesia, Nepal and Bangladesh. 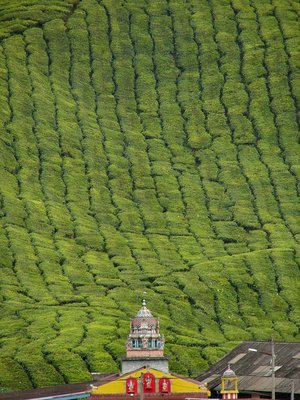 The picked leaves are left to wither. Then they are rolled in order to twist and break and withered leaf and expose its juices. The third stage is 'fermentation' (actually oxidisation). Then the leaves are dried for twenty minutes at 100 degrees C. Finally they are sorted. The best grade is leaf. The intermediate grades are broken, and fannings. The lowest quality is tea dust; this goes into tea bags.

After visiting the tea plantation we went for a walk in the rain and in the jungle. It was warm work. After about an hour and a half we reached an area containing several buds and flowers of Rafflesia arnoldi, discovered by Raffles and Arnold in Sumatra in 1818. It is the largest flower in the world; this alien-spawn is a bud. The plant is parasitic. 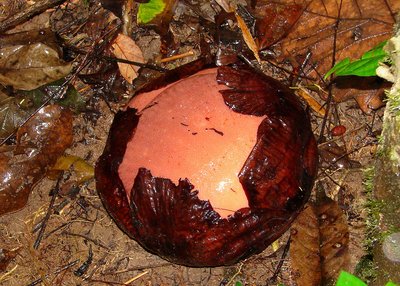 They flower for only a couple of weeks, unpredictably. For the first week they are bright red, as here, and they don't smell of much. Then they darken and begin to stink of rotten meat, which attracts the flies essential to the plant's reproduction. 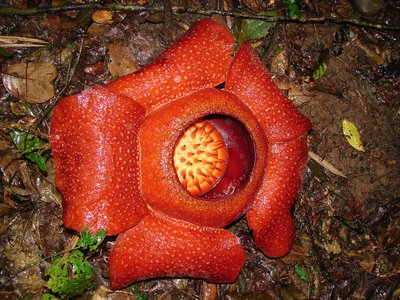 This is Hannah with a millipede. I managed to cope with it crawling on me for about two seconds. 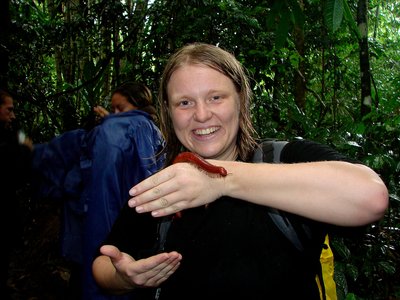 Then we visited a waterfall. The water was muddy and uninviting, but three hydrophiles entered. We had been told that there were no leeches, but two people got little leeches on their feet. This is John, our Gruppenfuehrer. 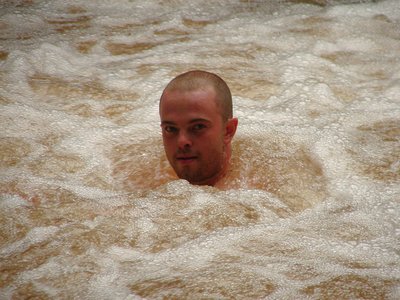 Upon retracing our steps some of us had a go at blowpiping darts using the blowpipes that some of the local non-Malay bumiputra use to hunt. The blowpipes are about two metres long. It takes less blowing effort than you'd think. 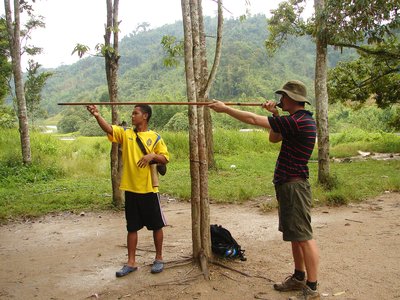 And then we bussed off to a butterfly farm. This was great fun. First we were shown a number of large insects and other arthropods. This is Sam with some scorpions. 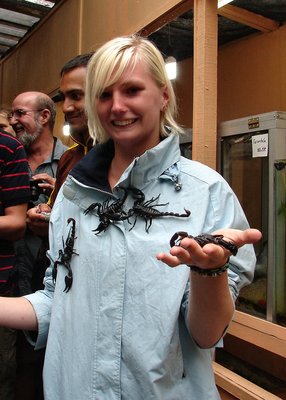 Hannah with a mantis. 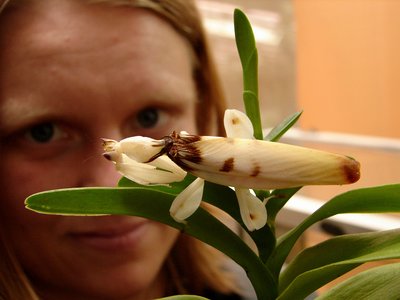 A Malaysian horned toad, and a couple of lizards. 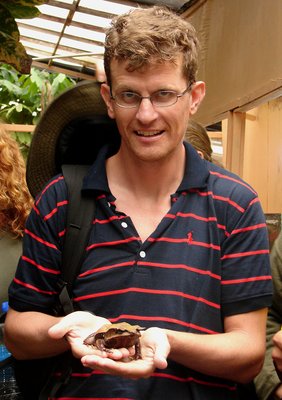 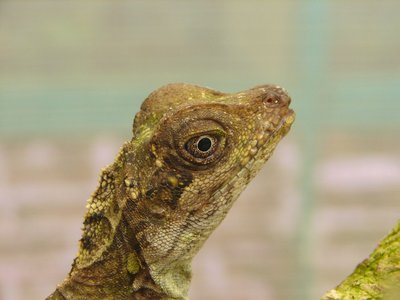 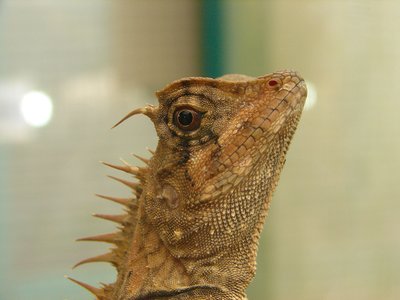 Then we wandered into the butterfly enclosure. It was well below the temperature at which the butterflies are active - cold, in fact - so they just sat torpidly in vast numbers. They only live for a few days, and quite a few had ceased to be. 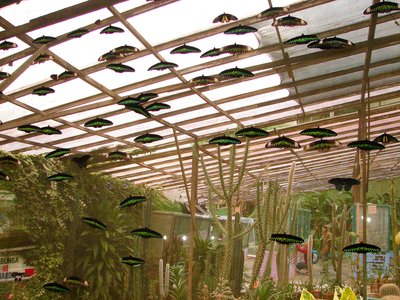 The majority were Rajah Brooke birdwings, Trogonoptera brookiana, named by Alfred Russel Wallace after the first White Rajah of Sarawak. These butterflies have red heads and brilliant tooth-shaped flashes of green on the back of their wings. 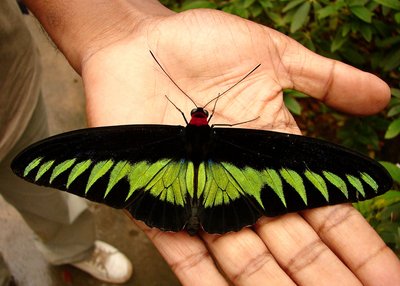 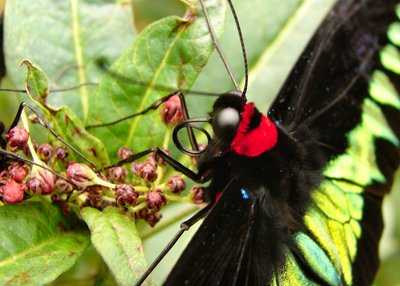 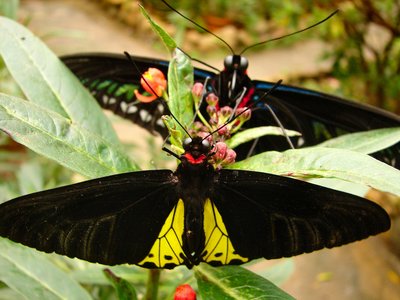 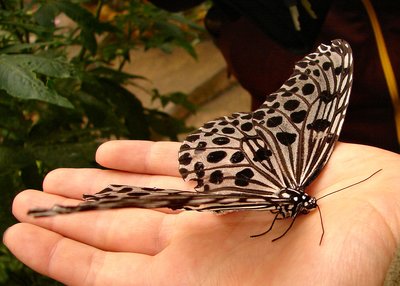 Posted by Wardsan 08:19 Archived in Malaysia

Hi wardsan nice blogs but please check your dates, either you have a tardis or ive missed nearly a whole month out somewhere,(check date on cameron highlands article)Yours sincerely g.clifton

Wow, it's spooky to have one's scribbles read so closely. Thanks: the corrigenda are now correcta.

Hi again
The only reason i read it so closely was bacause i remember the highlands from when i was a kid and got taken on butterfly hunting trips there by a malaysian military based father (good times,1970)