One of the most famous sites in Saigon is the Reunification Palace. An older palace stood here, but in February 1962, when even Diem’s own troops got fed up with him a couple of them bombed it, and it had to be demolished. The Independence Palace, as it was then called, was then built on the site. 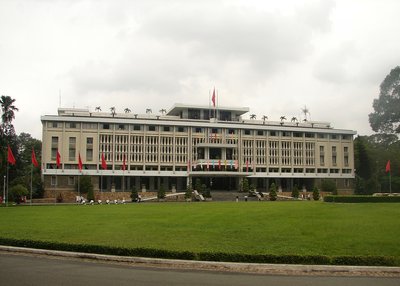 As the presidential palace, it was the place to which the North Vietnamese army rushed when it entered Saigon on 30 April 1975. Senior government officials, including Big Ming, were waiting for them, and the soldiers took them straight off to the radio station. One of the most famous photographs of 1975 captured two NVA tanks crashing through the front gates of the palace. I remember it. Except it’s a fake memory: I saw the pictures and footage often enough in my childhood for it to feel like a real memory.

The building itself looks like a cross between a 1960s university library and the Council of Europe Building in Strasbourg. It’s also definitely a palace: there is a presidential receiving room, a VP receiving room; an ambassadors’ hall; a cabinet room; a 42-seat cinema; a helipad; a gaming room that looks like a Bond villain’s lair or the Moloko bar from A Clockwork Orange.

This is the President's receiving room: 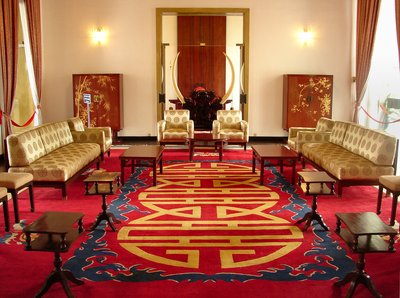 And there are living quarters: a concrete cloister with a fountain in the middle and elephants’ feet and model boats by the walls. 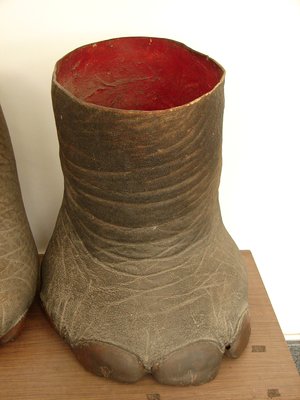 Renamed the Reunification Palace, it is still used for official functions but is also a museum, preserving the building as it was in April 1975. There are old-fashioned telephones in pastel colours and formica tables. 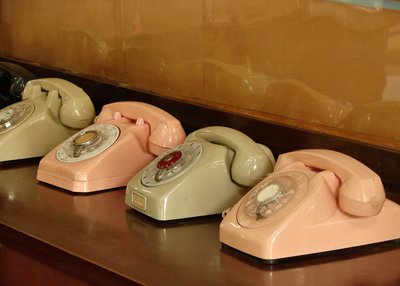 Aside from the president’s office, which is rather dingy, it is a very successful example of architecture from a decade in which there were plenty of failures. Much more open to the tropical elements than your average faculty building in the Midlands, it’s airy in most areas, and beautifully decorated in a modern style. The ambassadors’ hall has an interesting lacquer painting covering one wall, depicting the great Vietnamese king-hero Lê Lợi. 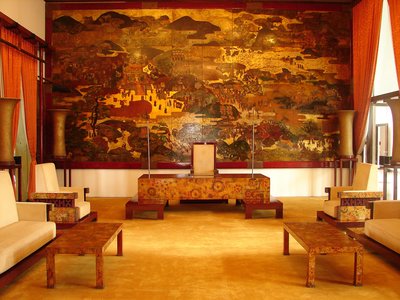 There are three levels of balconies at the front. They form a Chinese character; added to the central pillar, they form another one. The plan of the building makes another.

Not wanting to be rebombed, Diem built a bunker under the palace. (It didn’t do him any good. In 1963 there was a coup. Diem retreated to the bunker and then ventured out to hide in Chơlơn, where he was found and murdered.) This was used as a war room, and there are fascinating maps of the war situation from 1975. There is also a radio station, telex office, switchboard, a spare bedroom, and a bombproof lower level. It looks like something from the Second World War. 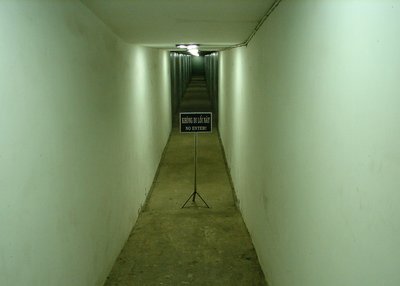 At this stage I was following a small tour group. An American family, the father excepted, were remarkably ignorant. After being told several times, they could not grasp who was fighting whom, or who was communist (answer: no-one; ‘we’ are socialist).

Then we watched a video about how ‘we’ won – a logical impossibility after a civil war. Apparently the entire Vietnamese people were deeply saddened after the passing of Uncle Ho in 1969. Since half the country was fighting the other half at the time, I doubt it. Fortunately the video broke half way through.

The War Remnants Museum mostly offers the usual shrilly mendacious exhibits, such as the hall of historical truth. I’ve gone about this before, but what particularly offends is the hypocrisy. For example, the exhibition cries that the South Vietnam regime breached the Geneva accords by singling out former Viet Minh fighters for reprisals. It doesn’t mention that under the same accords the Viet Minh were supposed to withdraw from South Vietnam, and didn’t. They also breached their undertaking to withdraw from Laos.

There is a further exhibit on the prisons of South Vietnam, and especially on the ‘tiger cages’ of Con Ðao, previously known as Poulo Condore. The French built the prison and kept political prisoners there. In the American War VC prisoners were kept in appalling conditions, were subjected to torture, given inadequate food and some were summarily executed. By all accounts Diem made Pinochet look like Mandela. This is worth recording, and the exhibit lists the forms of torture in some detail. But equally worthy of note is the fact that after unification, the Hanoi regime continued to use the same prisons in precisely the same way. (Equally important in modern Vietnamese history are the three hundred thousand or so évolués carted off to concentration camps for “re-education”; and the more than a million people who were so desperate to flee the Socialist Republic that they risked drowning and piracy to sail away.) The rope suspension torture that I mentioned in a previous post is described graphically; it takes gall to condemn this in public while inflicting it in private. Yet again, any sympathy is wiped out by the tendentious presentation.

However, a couple of the exhibits are worth seeing. One exhibit focuses on the ‘war crimes’ of the Americans, in particular the use of napalm and agent orange. It is an interesting question whether the wholesale deployment of these agents was a war crime, as the exhibit implies. I can’t remember any international criminal law, but just applying general principles of proportionality (the essence of ius in bello) gives three candidate reasons:

• That the aim was itself objectionable. The exhibit says that the aim was to return North Vietnam to the stone age. Although General Curtis LeMay famously used that exact phrase, I don’t believe that it was in any way an objective of the US forces.

• That the means were not sufficiently related to the goal. The real objective was to block the Ho Chi Minh Trails and starve the VC of supplies. This is an ancient and generally legitimate tactic. But did the chemicals help? Yes: they deprived the VC of the cover they needed to operate without being discovered. It was strategically rational.

• That the means used went beyond the minimum necessary to achieve the objective. The US military sprayed 77 million tons of defoliants on south Vietnam, including about 20 million tons of Agent Orange. A vast proportion of land under cultivation was sprayed or napalmed. A fifth of forest land was sprayed. Sixty per cent of mangrove forests disappeared; most of the area between Saigon and Cambodia was sprayed; and most of the DMZ too. Not to mention Laos, which suffered even more. I am not in a position to judge, but this must be an arguable case. The manufacturers knew about the dioxins when they sold it to the US government. If the presence and horrendous effect of the dioxins was known to the US government at the time then the case would be reasonably easy to make out.

There were, of course, other specific war crimes, notably the well-documented massacre of 504 villagers at Mỹ Lai, burning of villages, free-fire zones, throwing prisoners out of helicopters, cutting off ears for the body count (which the British also did in the Falklands), and so on. But the question here is whether the use of the chemicals was per se criminal. A similar question must arise as to whether the indiscriminate Nixonian bombing of Hanoi and Haiphong was disproportionate. Neither question will ever be answered in court, any more than the similar questions over the carpet-bombing of Hamburg and Dresden.

No doubt this has been investigated further. I know that there were Congressional hearings into specific allegations of war crimes at the time, but I don’t know the outcome. That would require research, and I haven’t got time.

Agent Orange is a roughly equal mixture of two phenoxyls: 2,4-dichlorophenoxyacetic acid (2,4-D) and 2,4,5-trichlorophenoxyacetic acid (2,4,5-T), chemical formula C8H5Cl3O3. They work by inducing growth so rapid that it kills the plant. The manufacturing process for 2,4,5-T releases dioxins such as n, 2,3,7,8-tetrachlorodibenzodioxin. (2, 4-D does not release dioxins and is still used as a herbicide.) The dioxins are associated with genetic defects and numerous cancers. In 1984 nearly 20,000 US veterans exposed to Agent Orange received a settlement of $180m from the manufacturers, including Dow Chemical and Monsanto. Australian, Canadian and New Zealand veterans also reached a settlement in 1984. A quarter of the children of Australian vets were found to be born with deformations. Korean veterans received $62m in compensation in 2006; this was a court award. Per capita, these are tiny numbers in relation to the damage caused. Vietnamese victims sued the manufacturers as well, in New York but the case was dismissed in 2006.

The US government has offered almost no assistance to veterans or their children in relation to Agent Orange syndrome, let alone to Vietnamese victims. Others cannot sue because the government enjoys sovereign immunity.

The Vietnamese government claims that 5 million people have been affected, but it is not clear how they arrived at this figure. In Cam Lo district, Quang Tri province (the DMZ), 4% of the population is said to be affected. The museum attributes every case of congenital blindness, peripheral neuropathy, spina bifida, birth malformations, cleft palates and even possibly Down’s syndrome to dioxins. But some children with such characteristics are born in any population, and you have to subtract that base rate from the rates observed in order to estimate the additional effect of dioxins. And you cannot say that any particular case is caused by dioxins. The museum doesn’t do any of that, so the numbers are overestimates, perhaps large ones.

Of the two million hectares of forest land sprayed, half are “yet to be rehabilitated”.

Much the best thing at the War Remnants Museum is an exhibition called Requiem. Organised by the Association of Photographic Artists of Saigon, a steering committee in Kentucky, Tim Page, Horst Faas, the Vietnamese Association of Photographic Artists and the Vietnam News Agency, it displays the work of the many insanely courageous photographers on both sides who died or disappeared during the conflict. They include such famous names as Robert Capa, Sean Flynn, Dana Stone and Larry Burrows. On the northern side, 76 photographers died. The exhibition includes several photos from Robert Capa’s last rolls of film, taken before he stepped on a mine, and good ones they are too, juxtaposing martial activities with agricultural.

The display was even-handed and all the more moving for it. Some of the pictures were magnificent. They included Larry Burrows’ extraordinary Time spread of a bombing mission in which the pilot died: “One ride with Yankee Papa 13”. Other highlights: Henri Huet’s superb photos of medics in the field; Robert Ellison’s photo of an exploding ammunition dump at Khe Sanh (published in Newsweek the week after he was killed); and Gilles Carron’s pictures of Hill 875 at Ðak To.

One thing I didn’t know is that the OSS – the forerunner of the CIA – helped to train the Viet Minh. Indeed the first American soldier to be killed was an OSS officer, killed by the Viet Minh by mistake. It makes sense: both were fighting the Japanese at the time (1945). It would not be the last time such a policy rebounded on the US.

Posted by Wardsan 10:33 Archived in Vietnam