I’m in Bangkok suffering from a huge lull in motivation, I hope temporary. It may have something to do with the humidity. Instead I’ve been burning cash but have little to show for it. That’s what comes of hanging around the shopping centres.

There are a number of food vendors among the market stalls just east of Central World shopping centre. One of them sells grilled insects such as crickets and cockroaches. Even hen they're deceased and grilled, I can’t bear to look at roaches. Don’t you know where they’ve been? And I’m not convinced that merely grilling a cockroach would kill it, if nukes don’t. So I went for a bag of crickets, with a little chilli sauce. They’re crunchier than a soft-shelled crab but not as crunchy as a prawn’s tail. They absorb the smoke of the grill and they taste a lot like pork scratchings - much nicer than a tepid sausage I had at the same time. They’re anatomically perfect down to the spiky hind shins, and they vary significantly in size. The largest ones have huge, downward-curving abdomens and they are more than a mouthful; I couldn’t bring myself to bite them in half.

The Queen Saovabha Memorial Snake Farm was founded in 1923 to provide antivenins for victims of snake bites. It was the second such farm in the world, the first being in Brazil. It is a serious endeavour and the snake farm is part of a local hospital and affiliated to the WHO. (They also give vaccinations and a rabies post-exposure clinic so I returned this morning to be jabbed with live encephalitis.) They milk the venom from the snakes and inject it into horses. They take blood from the immunised horses, extract the plasma and that’s it: antivenin in immunoglobulin form. Some is kept in Thailand and some is exported.

You can see the various snakes behind glass, but they also put on shows twice a day. A loopy herpetologist with an ear-mike talks about the snakes while they show, in series, king cobra; cobra; banded krait; many-banded krait (perhaps); and white-lipped pit viper. 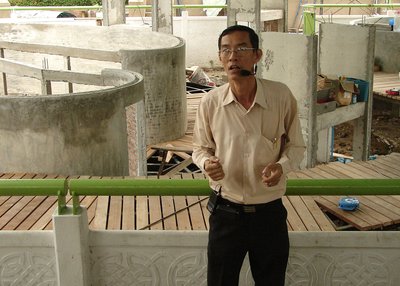 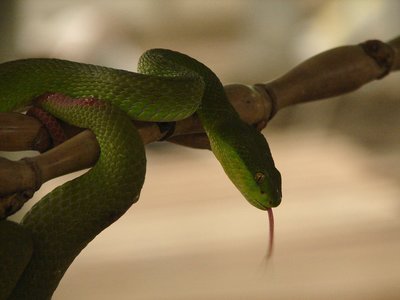 The king cobras are the biggest. 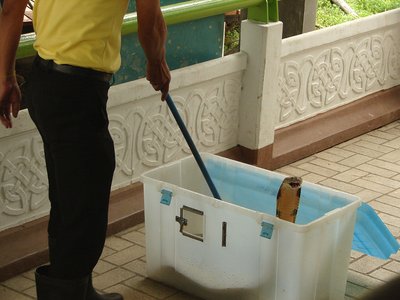 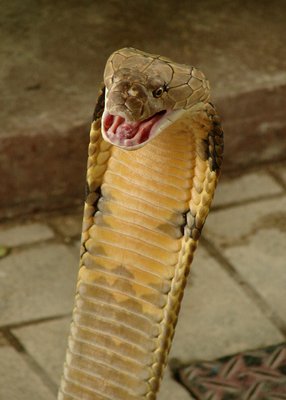 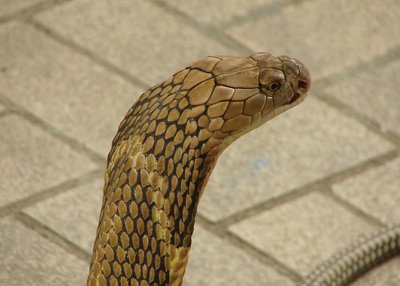 But scariest are the monocled cobras, which hiss. 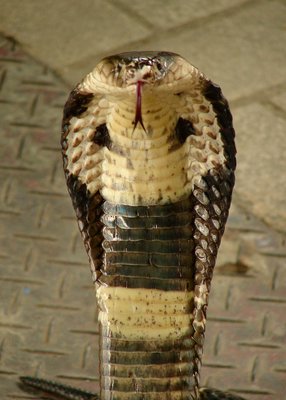 The snake handlers stand around in wellington boots and go just near enough to the snakes to cause them to rear up and display their naga hoods, to hiss and occasionally to strike. Then the handlers have to grab them to put them back in their box; that takes real skill and occasionally a handler will get bitten and perhaps lose a finger. 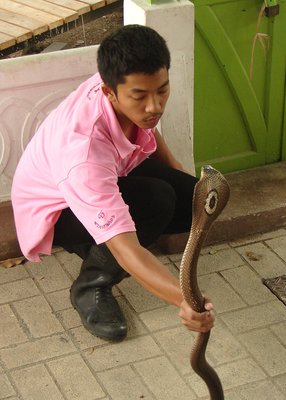 I was in the front row, very close to the snakes, and they advised us to stay still… 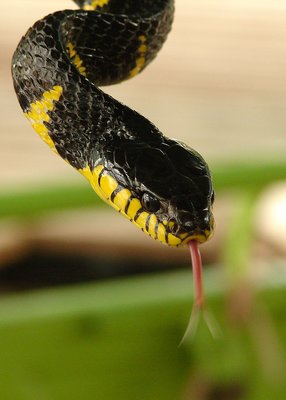 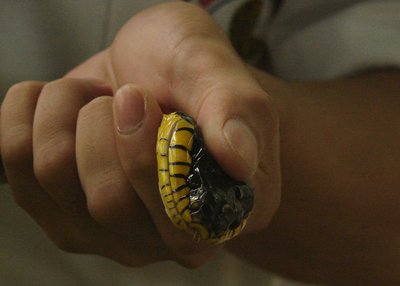 They also showed us an Asiatic rat snake, a copperhead rat snake and a Burmese python. These are not venomous. There is a project to increase the numbers of rat snakes in the rice fields because they eat rats (as do the farmers). I think the snake I handled in the Mekong delta was a Burmese python.

Monday was a yellow day in Bangkok. Perhaps half of the locals wear yellow T-shirts with the national crest on the breast. People here are hugely royalist and they sincerely love their king. (If any don’t, they stay quiet: it would be like professing Catharism at the Vatican.) They also wear orange plastic wrist bands inscribed with ‘Long Live the King’. On Monday a lot of yellow-shirted people came to Siam Square to participate in a demonstration against the Electoral Committee, which they say is corrupt. 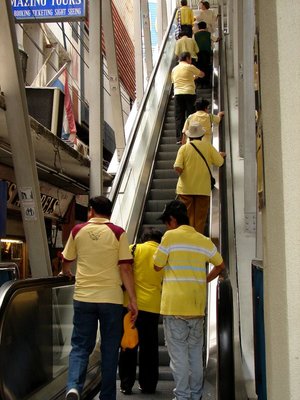 Tuesday was a largely pink day.

On Sunday night as I wandered towards the Metro I smelt elephant. I’ve obviously learnt something on this trip.

Sad but true: one of the most popular products on sale in pharmacies in Thailand, as in Vietnam, is whitening lotion. For Thais, the paler the skin, the better. Most westerners want a tan. We all want to be cafe latte.

I asked the nice guy who sold me a replacement mobile (I’ve lost all my contacts, by the way) about the cheap i-pods. ‘Made in China’ he said. But do they work? ‘Yes. For a few months.’ I’ve bought one to replace one that disappeared in Sapa, but I can’t make it work. My Chinese isn't good enough.

Posted by Wardsan 20:13 Archived in Thailand