I can’t remember whether I’ve mentioned this before; I've written quite a lot, very quickly. When the Vietnamese sniff, they do not merely sniff: they attempt to move all fluid from the nose, ears and sinuses into the throat, with perhaps a touch of cerebrospinal fluid if they try violently enough.

And when they spit, as they do frequently, they do not merely hawk, they try to slough the lining of their throats, and maybe even cough up an organ or two with it.

It’s perfectly normal. You often pass a young couple sitting on a bench, looking good, but both parties snorting and gobbing as if they’ve just been waterboarded and then tear-gassed.

They eat with their mouths open and smack their lips when they eat, in a way that I have previously seen only on The Life of Mammals. I find it deeply offputting.

On the other hand, we lick our fingers and we lick stamps. Southeast Asians find that disgusting. Minh Mang, emperor in the first half of the nineteenth century, used to call westerners “barbarians”, and given the state of the average backpacker in Saigon you can see why.

I spent a couple of days recently on an absurdly cheap tour of the Mekong delta. The Mekong splits into two in Cambodia and subdivides further in Vietnam, where the Mekong serpent has nine heads. At Mỹ Tho, on the Lower Mekong, the river is a mile wide. It does not look like a lake or a sea, but it differs so far from the mental model of a river that the brain does not register it as such; simply as something else.

The turbid river carries immense quantities of silt; you can see it flowing miles out to sea on satellite maps. The silt markedly increases the fertility of the land in the delta, as it does in Egypt. I don’t know how this effect works since it’s just quartz and feldspar dust. A lot of barges carry sand up a canal to Saigon, perhaps to feed the infinite appetite for cement. I don’t know where it comes from; could it be reclaimed silt? 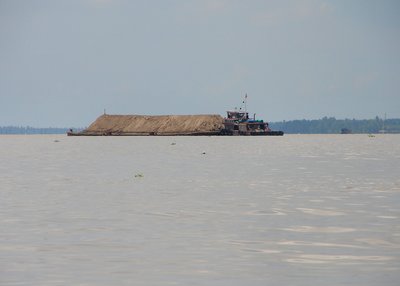 The delta is a waterworld, with 3,000 km of rivers and canals. They are building bridges in some numbers – all to an identical template, it appears – but you still need to get in a boat to get to most places conveniently. 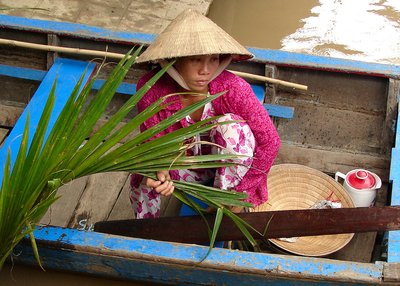 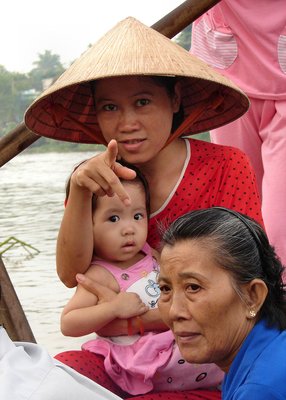 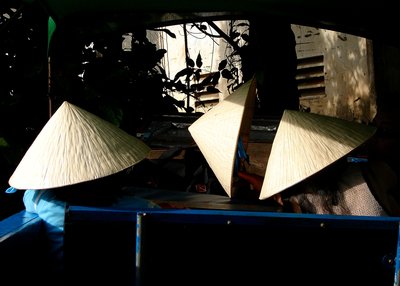 Seventeen million people live here, slightly more than live in Holland. It is one of the most fertile regions on the planet, so it has always been densely populated. (They were smelting metal here centuries before metallurgy reached Europe.) The region produces 14 million tonnes of rice – in three crops a year - out of the national total of 36 million. That is about half of what Vietnam eats, I think, so in principle the region could support a much larger population. If that were the case, the entire region would be under concrete and there would be no rice. You can see that effect on the outskirts of Saigon. The population of Saigon is currently said to be around 8 million people and 5 million motorbikes. Both numbers are growing. Every peripheral plot is a building site. The city is spreading at what would appear to be hundreds of yards a year – and the land being built on is some of the best arable land on earth.

In fact it will be interesting to see whether the increased rate of return on agricultural land will reduce the rate of substitution into other activities. I suspect it won’t slow it at all. The value added for each square metre of urban land in Saigon is probably many times that added by a square metre of rice, even at today’s high prices. If so, concreting the paddies around Saigon is economically efficient. 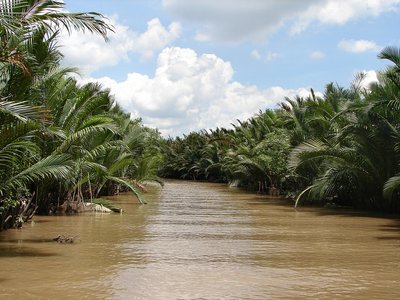 Some of us stayed in a stilted bamboo bungalow a half-hour boat ride from Cần Thơ. 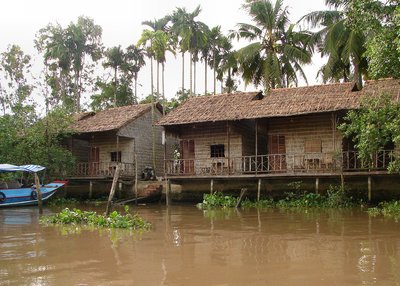 By this time we were running over two hours late. We had had to change bus twice and were delayed by the rush hour on the ferry over the Bassac. Beer-deprived, I was cross. 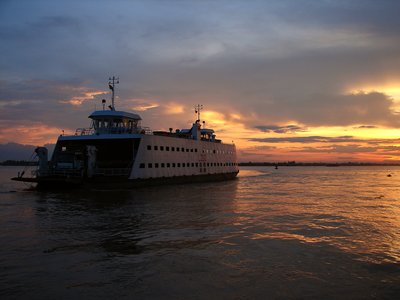 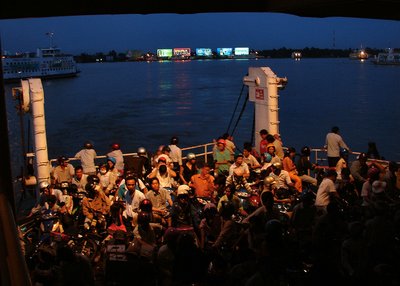 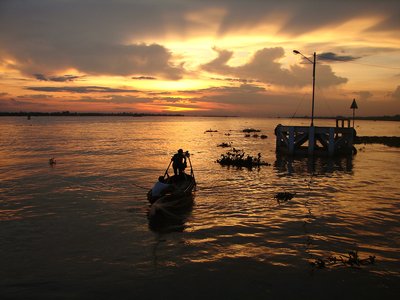 The proprietor introduced himself when we arrived: “Hello, I’m Hung.” “Lucky you.” Well, someone had to say it.

I went to sleep under a pink mosquito net to the sawing of cicadas and the occasional tut-tutting of geckos. 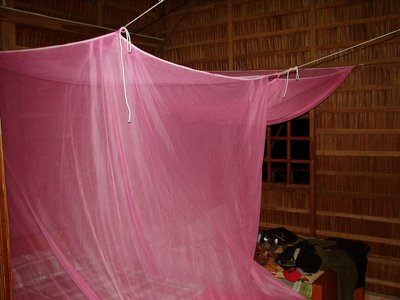 A few of us went for a walk at 6 am. The motorbikes were passing on their way to town so there was no way to sleep.

Things are changing fast in the delta. Until two years ago the track was just a path that could not take motorbikes. All the residents worked locally as farmers. At the same time as the path was upgraded to a track, a new concrete bridge was built over the canal. Suddenly the residents had fast access to the nearest town, Cần Thơ, and now all but the very young and the old commute to jobs in Cần Thơ by motorbike. They earn a lot more there, and the buildings are being upgraded from bamboo to brick. 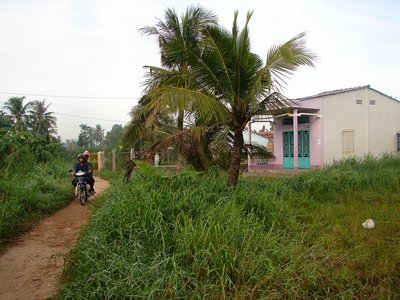 On our early morning walk we stopped at a small local market. It operates from four until eight in the morning. On sale, as well as the usual fruit and veg: live fish, eels, frogs and ducks; marigolds for praying to Buddha (giving long life); banana flowers, pumpkin flowers. 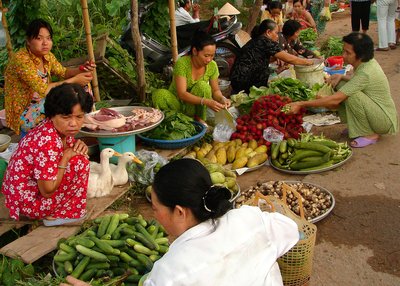 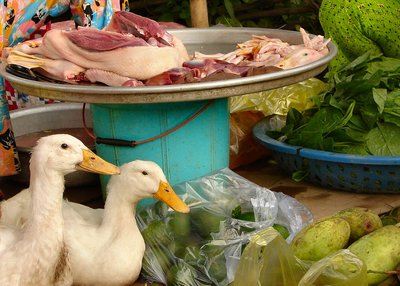 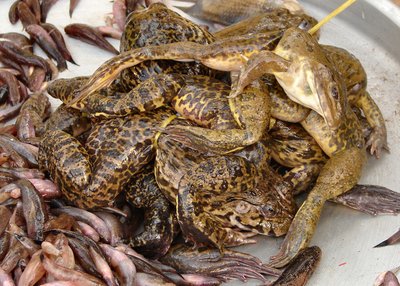 I picked a clump of kapok overhanging a shack. They used to stuff pillows with it. It feels like cotton wool. 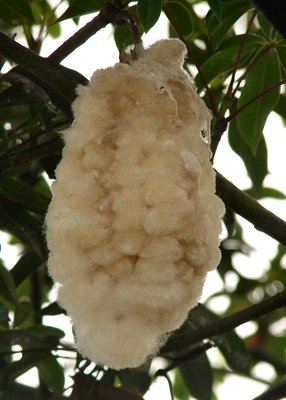 Later in the morning we visited a floating market. Bigger boats come from elsewhere to sell their goods. Buyers and tourists float between them in smaller boats. 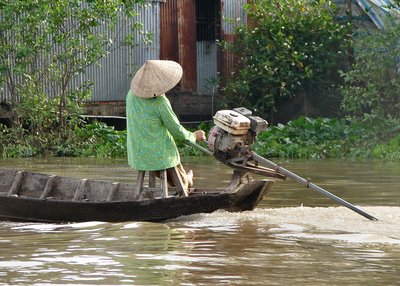 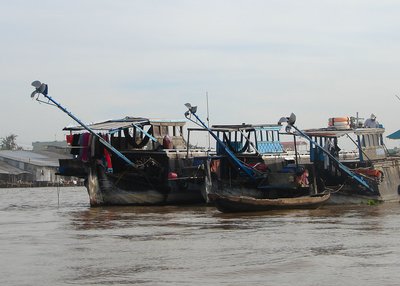 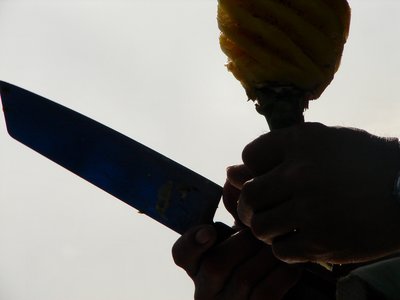 In a tour group you see the world through a bubble. I have less curiosity about what I am seeing than when I am on my own, and the impact of the surroundings is attenuated. In a large tour group – 32 of us - the notional object of interest barely registers, and most of the fun comes from talking to the other tourists. To be honest many of the sites are not much in themselves: a family making coconut candy; a rice husking factory (closed); a family making rice noodles. 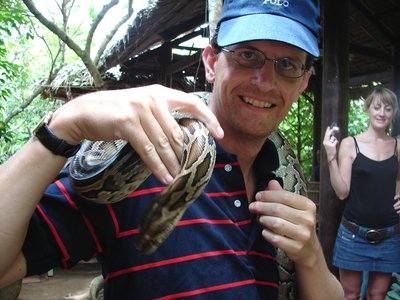 To make the coconut candy they leave the flesh to dry; slice it finely in a machine; squeeze the milk out; add sugar and milk and leave for 45 minutes; heat until it turns into caramel; pour into metal moulds; chop and package on site. No part of the coconut is wasted: the wood make the pillars of the house; the leaf provides the thatch; the hairy nut makes matting and soil for bonsai trees. 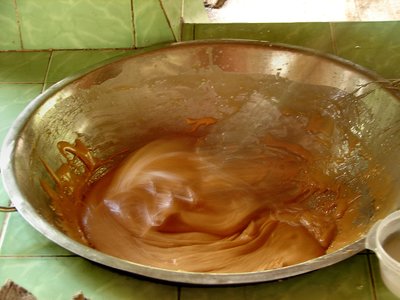 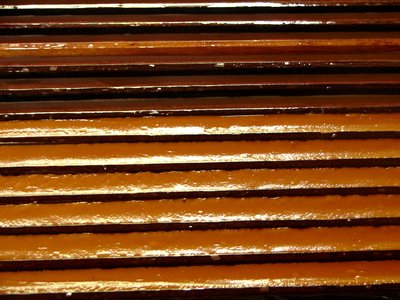 More interesting is the landscape itself. Water coconuts overhang the creeks, and coconut palms grow behind them. 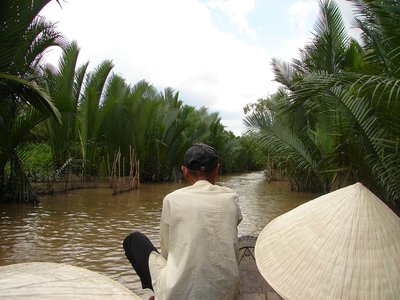 This is a mudskipper, a living record of how animals conquered the land. At least, according to the Guinness adverts. 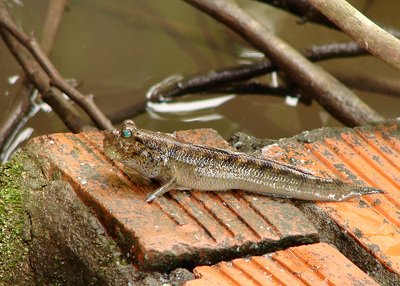 Everywhere you go in the countryside, and in many places in the cities, you see loudspeakers atop telegraph poles. Every morning and evening the loudspeakers amplify the Voice of Vietnam - a news station. 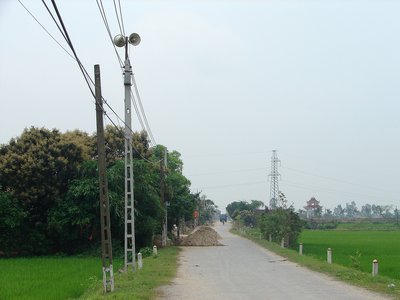 Electronic amplification over public loudspeakers, carrying a hectoring voice that you can’t switch off or turn down. An Englishman is legally obliged to use the word Orwellian here – and indeed I have done so in a previous post.

I asked Hung about it in the Mekong delta: why? He seemed slightly offended that I asked: it’s very useful, he said. People like to listen to it. No-one minds that it starts at five because everyone is already awake.

Posted by Wardsan 19:01 Archived in Vietnam