It is pouring in Saigon and I have repaired to a wifi cafe in the Pham Ngu Lao area. There is a building on fire just across the street and there is a fair bit of smoke in the cafe. It is yellowish and a little acrid but it smells better than cigarettes. Excited people are thronging the street. Two fire engines have just turned up but I expect the rain will put it out anyway. 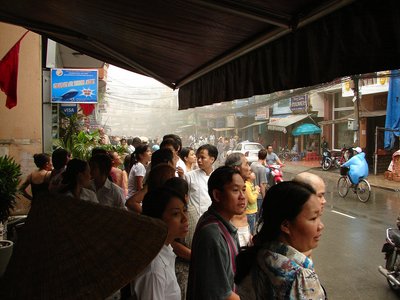 I may have given the impression in the previous couple of posts that I don't like Saigon. On the contrary. Neither the French nor the Americans bombed the city and there are quite a lot of ochre colonial buildings. 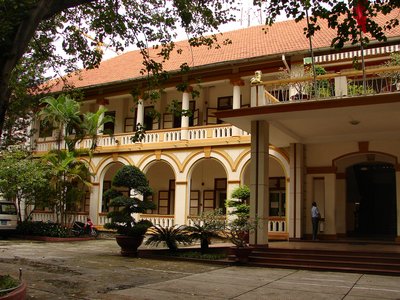 Most of them make use of a motif that I call the false arcade. There's probably a real name for it - blind arcade perhaps. You would walk past them in Europe without troubling to swivel your eyeballs, but here they are worth looking at. They are hotels, restaurants and company headquarters. Verandahs are common. The municipal buildings such as the old Hôtel de Ville and the Post Office are classical in design. Here is the complacent facade of the Hôtel de Ville. 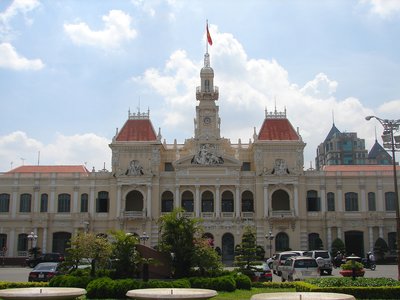 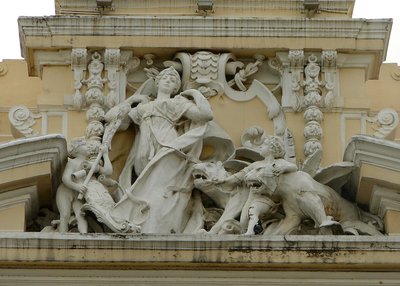 And here are some shots of the Post Office, which retains its old telephone booths and even the old maps on the walls. One is a map of Saigon dating from 1892. 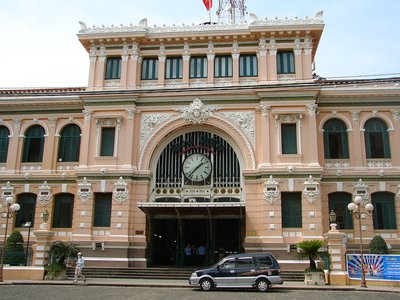 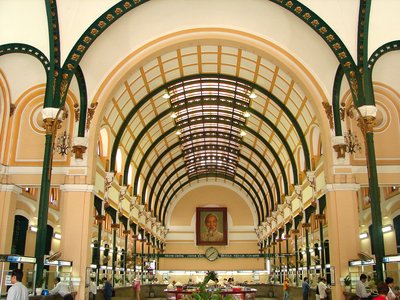 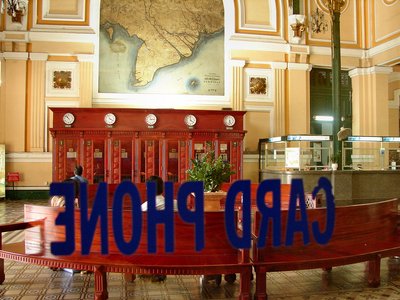 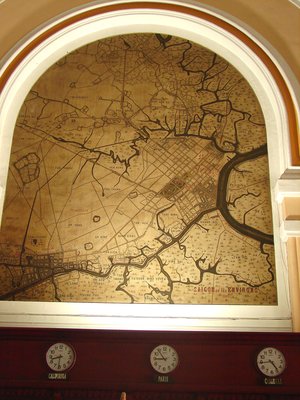 In between the large old buildings are streets full of the usual Vietnamese city buildings: narrow but deep plots, each building touching but built without reference to its neighbour, all built at different heights. On a bus I saw some old trading houses, like those in Hoi An: narrow, wooden, with the pitched roof that is never now constructed. And sprouting fast are the glass and curtain wall towers of the oilman and the insurer. This juxtaposition of old and new is arguably a precondition for architectural greatness. It's certainly what makes London - that and the 300 languages. 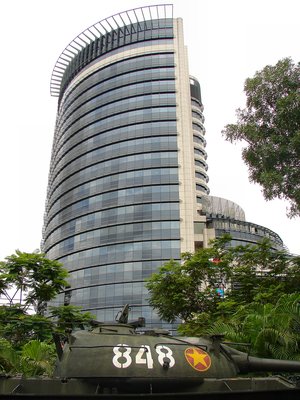 Of the little that I have explored so far, my favourite part is the Dong Khơi area near the river Saigon. Dong Khơi means 'uprising'; it is also the name of a street in the area, previously and much more romantically known as the Rue Catinat, after some old admiral. In this district it is not unusual to be able to walk an entire block without having to step into the road – a unique experience in Vietnam. 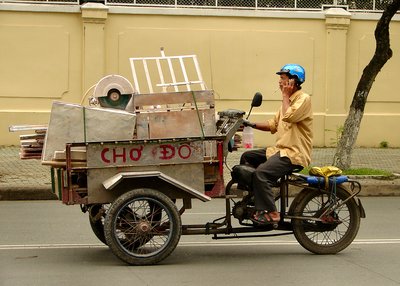 And the traffic is no worse than Hanoi’s; I had been expecting worse. Admittedly I have been hit by a motorcycle here. I was crossing at traffic lights, the green man illuminated, when cold cocked by a motorbike turning left and cutting every inch of the corner. But I probably weighed as much as rider, passenger and bike put together, and no party suffered damage.

In fact, after becoming very fed up with Vietnam recently, I’m delaying heading to Bangkok. Not because there are things here that I really want to see, but because there are things here that I really want to eat. I could easily get into a way of life here that would involve a sunset drink on the 23rd floor of the Sheraton followed by a good meal. Surprising that I should delay going to Thailand, one of the gastro glories of the globe, but there we are. One of the more interesting dishes of the last two days was snails in coconut milk and coriander. These were not French garden snails, but more conical. No extraction equipment was provided; you just had to suck violently and that was part of the fun.

Another dish was a green papaya salad with sliced pig's ear. The pig’s ear looked like raw streaky bacon, crunched cartilaginously and tasted of little. Not a success. Another example of the importance of texture in Chinese and Vietnamese cuisine: the more slithery or crunchy, the better.

It two months since I left Hanoi and I can’t remember now why I disliked it so much. I think it was, first, because I was forced to be there waiting for a visa, and second, the hassle. Well, the hassle continues throughout Vietnam. And Hanoi does have a range of restaurants only matched by Saigon. So I have to reconsider. It’s not so bad in hindsight - just difficult to get around on foot.

The problem with the Lonely Planet guide is that nearly everyone uses it. Once a hotel or restaurant appears in the LP it no longer has to make any effort to attract custom. Some piously maintain high standards; most profiteer. I mentioned to Michel, my diving buddy in Nha Trang, that I was thinking of buying a Guide du Routard instead. He was dismissive: “Guide du Connard, we call it”.

Lest anyone think that the single party state in Vietnam is in any way liberal just because it now lets people get on with making money, this is what happens to journalists in Vietnam who do their jobs.

Of the places I've visited since arriving in Saigon, the following are worth describing further: Reunification Palace; War Remnants Museum; Mekong Delta; Saigon Zoo. The problem is that I want to attach pictures of these places. Editing and uploading the pictures is extremely time-consuming and I don't usually have time both to write and upload pictures. This is why there are long and variable lags between experience and description; there are things in Ninh Binh, Hue and Hoi An that I still want to write about, for example. I suspect most people would rather see the pictures and cut the crap. So now for some uploading.

Posted by Wardsan 12:59 Archived in Vietnam