I wrote a couple of days ago that Ðàlạt does not feel particularly French. Feeling slightly better this afternoon, I went for a walk and saw a part of town that does look rather more so. It is the higher part of town. There is a wide main road, which you could call a boulevard if you wanted, and some larger detached buildings, which you could call colonial villas (although most of them are newer). There are some genuine-looking villas on Tran Hung Dao, although some of them have as much Neasden as Nantes.

There is a ‘cathedral’, built in the 1930s. I like this cathedral, perhaps because I have never seen anything quite like it, especially the porch. 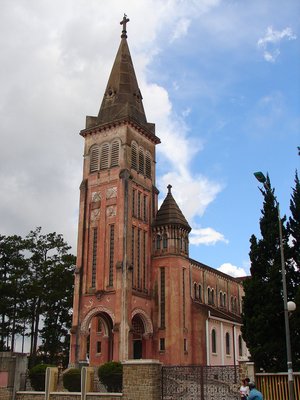 Farther along the main road there is the Ðàlạt Palace, now occupied by Sofitel. It looks the sort of place where an Agatha Christie thriller would be set, or perhaps a high-class nursing home. But it’s fairly grand, the grounds are nice, the view over the lake is good, and if I ever come here again this is where I’ll stay: the double rooms are £80-90. I intend to eat there tonight, in fact. 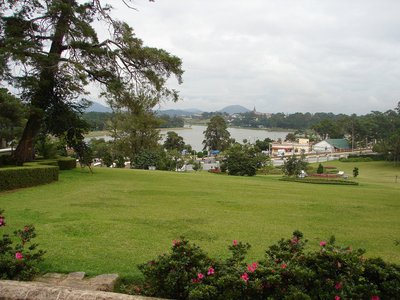 Although it’s a mile up the landscape is not mountainous like Sapa, dominated by Fansipan; it’s more like Skipton. That's no criticism.

Before seeing any of this I visited the Crazy House, a set of buildings designed and built since 1990 by Ðặng Việt Nga. She got a degree and a doctorate in Moscow between 1959 and 1972, in the days when the Russian empire was important. Later she worked at the Building Ministry in Hanoi and then in the Building Design Institute in Ðàlạt. Her father was the president of the Socialist Republic after Uncle Ho died. 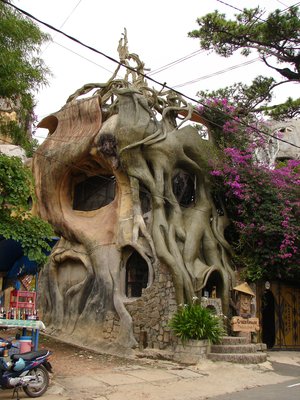 Her style, though, is the antithesis of the efficiency and brutalism of Soviet architecture. There is not a line or a plane in the whole place, but an infinite complexity that no plan or elevation could capture. Symmetry is rejected. The style is Gaudí meets Art Nouveau, Mervyn Peake and Terry Gilliam, with a bit of Dalí melting. 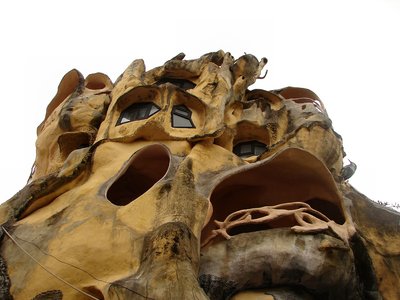 Like Art Nouveau, the inspiration is organic. Everything sprouts. A column of creepers turns into a giraffe. Two of the buildings are styled like tree trunks. The stairs wind around the outside. The rooms have windows on all sides. You might be in an elf’s house (is it elves that sit on top of toadstools?). 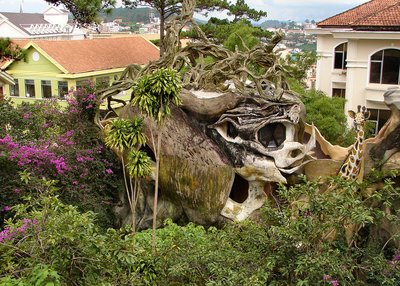 Each room is different. This is the interior of the Bear Room. 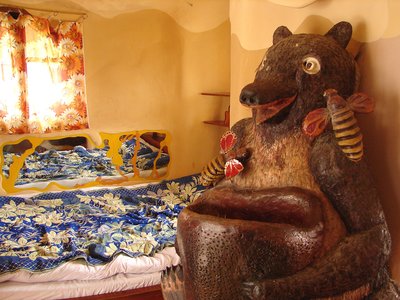 This is the Tiger Room. 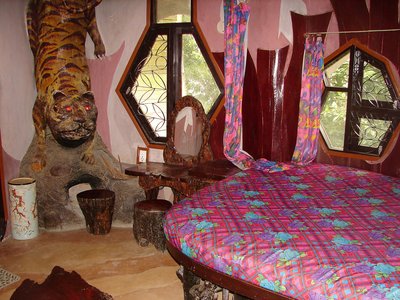 It’s a hotel, by the way, as well as a popular tourist attraction; one room is on two levels, with a brilliant root-like banister. Or maybe it is just a root. 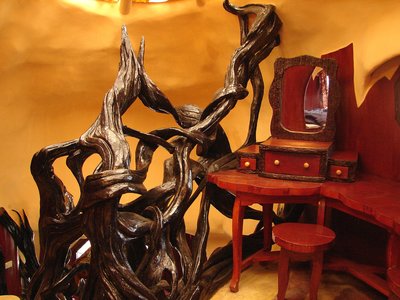 It is, obviously, completely tasteless –it makes Gaudí look like Wren - but when you do something so extreme and so confident, it goes beyond taste. It’s brilliant – one of the few really original buildings to have been built in the country in the last hundred years. I would love to see something like this in Britain, but for one thing the health and safety laws would not allow it: for example I walked along a high walkway, with walls at knee height, which led to a sudden nothing. 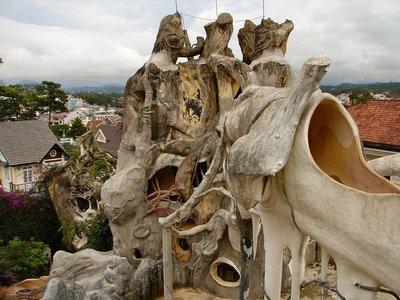 It’s odd, by the way, the I referred to Alexandre Yersin last time, since there is a Ðàlạt connection of which I was unaware. It was he who raved about the location in a report to the colonial government, which therefore developed it on his recommendation. It became the most luxurious hill station in southeast Asia, known (perhaps only to estate agents) as Le Petit Paris. It is not easy now, if it ever was, to see why. Even though it was never bombed, the luxury has vanished.

I forgot to mention the Ðàlạt Flower Gardens, by the lake. The plan of the site when you enter makes the place look like Kew Gardens. But the plan oversells it. Many of the areas seem to be closed or under construction; I saw no orchid in the orchid section. But, although it doesn’t match Sapa’s Ham Rong, it’s a nice place to spend an hour anyway. 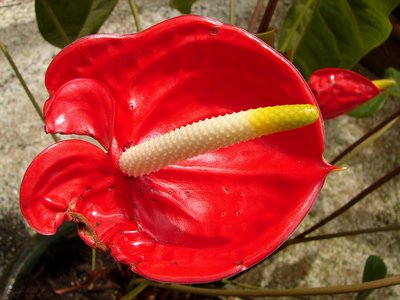 I am ashamed to say I haven’t a clue about flowers. Can someone help me out? 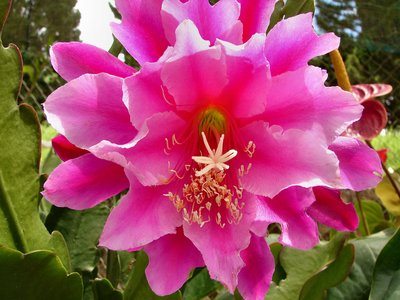 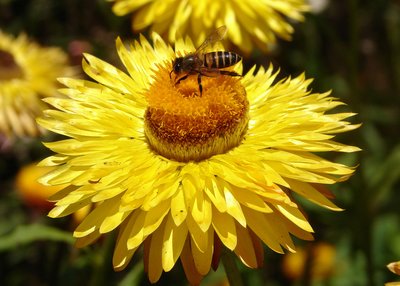 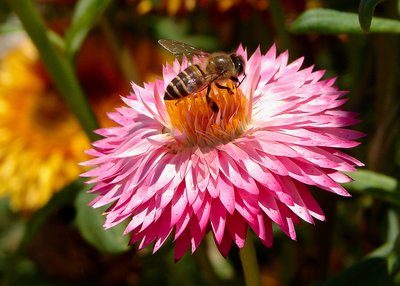 [I know know that this is a hibiscus. It is the national flower of Malaysia.] 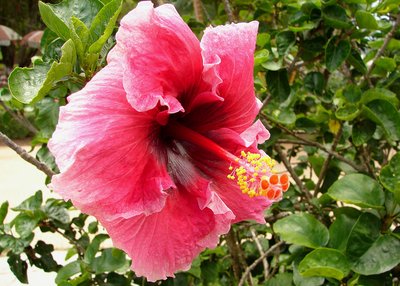 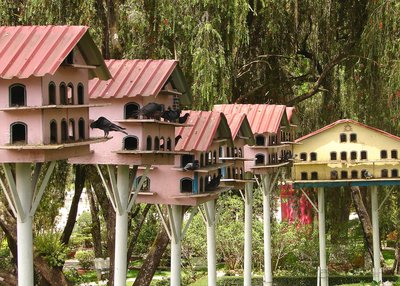 There I also took this photo. Many people wear helmets everywhere, now that the law on motorbike helmets is in force and enforced. You have to wonder whether they have not become carapaces. 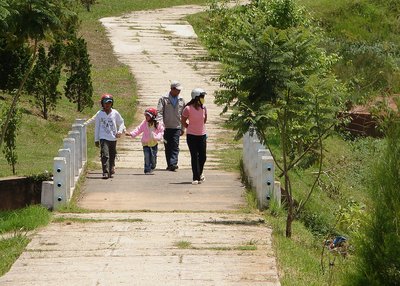 Tomorrow, all being well – an important caveat – I’ll head to Ho Chi Minh City. It will take all day.

Posted by Wardsan 19:20 Archived in Vietnam