An animal that eats a food that has been been poisoned will tend to avoid the food or the flavour in the future. This conditioned taste aversion is very strong: it often operates after only one event, especially for novel flavours. You can even condition wolves not to eat sheep. Generally, though, such a strong susceptibility to taste aversion is likely to be adaptive, for obvious reasons.

There need be no causal connection between the aversive flavour and the nausea. Rats given harmless saccharine water as the conditioned stimulus, and subsequently given something to make them nauseous, will not consume the saccharine water when later presented with it. And chemotherapy can induce conditioned aversion responses to foods eaten just before the therapy that induces the nausea.

Similarly, take a rat already instrumentally conditioned to press a lever for sugar pellets. If you then make it sick after eating sugar pellets, it will quickly develop an aversion to the pellets and a reluctance to press the lever.

I seem to recall reading at university – although I can’t find any reference on the web just now - that, if you combine several stimuli with the nausea: say, sugar water, flashing light and bells; it’s the taste that dominates the other senses; and a fortiori, it dominates the reason. This, too, is likely to be adaptive: nausea is usually caused by eating or drinking poisons. (But not always, of course: you can get salmonellosis by handling reptiles, and there is always Clayderman).

I have been thinking about this because I’ve been confined to barracks for most of the last four days with gastric flu. I have no idea what caused it, but I am certain that it was not the last things I ate before hurrying back to the hotel. Almost the last thing was a durian ice cream. Once again, it tasted of chicken rubbed with garlic and then left outside for a few days; I’m still searching for Wallace’s "custard and cream".

Now this was a dish that I would not have enjoyed at the best of times, but now even the thought of it makes me retch as I write. It’s the end of the durian experiment, and I won’t be able to eat ice cream for a while. The point is that my stomach has jumped to its own conclusions – and they are incorrect. And no such aversion has resulted from my last dish, which I can’t even recall.

Avoiding ice cream is sensible in any case. Refreezing partially defrosted ice cream and then eating the result causes a lot of food poisoning back home. So it’s not sensible to eat it anywhere where there are power cuts – which, so far, means anywhere outside Hanoi. And this is the only place where I've broken the rule.

(Alcohol applied topically kills salmonella – and given where the bugs are, there is only one way to apply the medicine (well, two if you’re French, but let’s not go there). I have no reason to blame salmonella rather than, say, campylobacter, but it's better to be on the safe side. Incidentally, I always thought salmonella was named after a fish. Turns out it carries the name of the American scientist who discovered it; a bacterium his epitaph. Cf Alexandre Yersin, one of the very few Frenchmen still to have streets named after him in Vietnam. He ran the Pasteur Institute in Nha Trang, and he also isolated the plague virus, now called Yersinia pestis.) 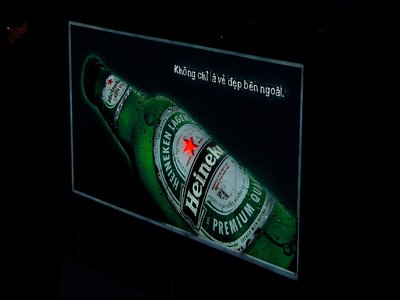 Even when I head out I can’t go very far: I’m pretty feeble after a couple of days without eating, and the Brown Trousers Risk is too high. I’m really really fed up with fever and arse-pissing; it’s not even three weeks since the last episode. And lying in bed listening to them building next door is hard work. (They are building next to every hotel in Vietnam.) Listening to the proprietor's daughter play Clayderman on the piano downstairs is as trying, although the Chopin waltzes have been welcome.

Sorry, but every long-term traveller catches copromania eventually. What do you expect from an Asia blog?

Whatever the source of the bug, it’s upset both the stomach and the plans. I was hoping to head quickly through HCMC, fly back to Thailand and then head down quickly through Malaysia with a tour group in the middle of June. I still intend to do that at some stage, but will have to take it easy for a while – something that wouldn’t be possible on a fixed itinerary.

I’m in Ðàlạt, incidentally; I got here just before falling ill. The journey was uneventful. This time I was struck only by the shocking alopecia of so many of the hills.

From what I can gather from my brief exercise breaks in the prison yard it’s a nicer place to be confined than Kon Tum. The place is packed with tourists – and almost none of them are westerners. The latter is a surprise, as Ðàlạt is firmly on the Lonely Planet and Open Tour routes.

It’s temperate here, as in Sapa. There are pines. They grow apples, pears, strawberries, apricots, sugar snap peas and artichokes, and they even seem to use greenhouses to grow flowers. The strawberry syrups, salted apricots, avocado milk shakes and artichoke tea are signature products of Ðàlạt. I’ve had the first three and they are pretty good (I had grilled eel stuffed with pork with apricot and chilli sauce today in my brief venture out, and the sauce was sensational).

Those of us from cold countries tend to head to warmer places to holiday. The Vietnamese do the opposite: they come here, a mile up. They walk around in jackets while I’m in a t-shirt.

An artificial lake, a sort of Serpentine, is next to the town. 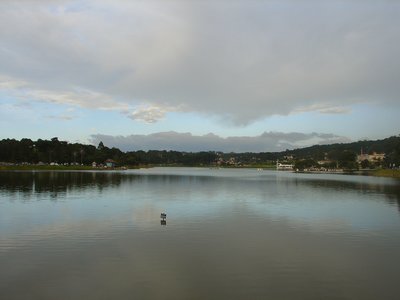 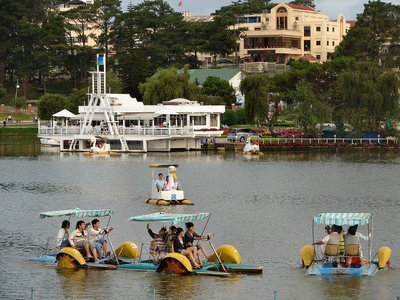 There is supposed to be more of a French feel here than elsewhere. The French, enjoying the climate, developed the place as a hill-station. 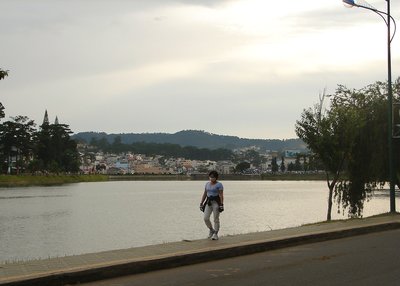 My dad asked me recently about the extent of French influence in Vietnam. It’s much less than I expected, and much less than what I hear about British influence in Malaysia and Singapore (where, after all, the official language is English). I can only speculate that Vietnamese culture is robust enough and, above all, the population large enough that most foreign bodies could be absorbed and forced to adapt themselves, the exception being China. China is also the ultimate example, turning invaders into sophisticated Chinamen within a generation or two – even Genghis Khan’s family. There hasn’t been a successful invasion of England, on the other hand, that hasn’t profoundly changed it – unless you count 1688, and I’m not at all sure why it doesn't count. [Actually the answer must be: Whig history.]

(Roman Catholic) Christianity, of course, is another matter: the Portuguese may perhaps have started it in the sixteenth century but de Rhodes arrived here in 1620, only five years after the Jesuit mission was established in Hanoi; and the French colonial era encouraged it further.

I’ve identified very few words of Vietnamese that obviously derive from French. This is partly because the Vietnamese do not pronounce any of the consonants at the end of words – a bit like the French, come to think of it, only more so. Oh, and I don’t speak Vietnamese. But the ones I think are French are:

(OK, spot the truncated sample. But you won’t find much French in words relating to government or law, for example – they’re all Chinese. If you want useful phrases like bribe, corruption, show trial, censorship, discrimination or hypocrisy, your French won’t help.)

But even here in Ðàlạt the French influence is not overwhelming. There is the particular fruit and veg; there is the odd bloke in a beret (although more in Sapa); the waiter tried to be supercilious but soon gave it up. That’s about it as far as I can see.

Oh, and the post office tower is vaguely Eiffel. And since it’s one of the greatest buildings in the world, why not? 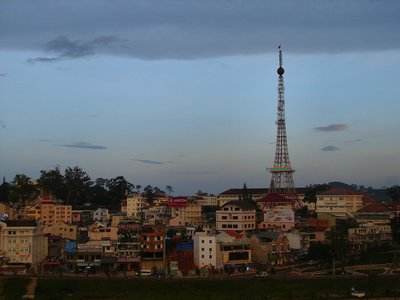 Posted by Wardsan 18:28 Archived in Vietnam