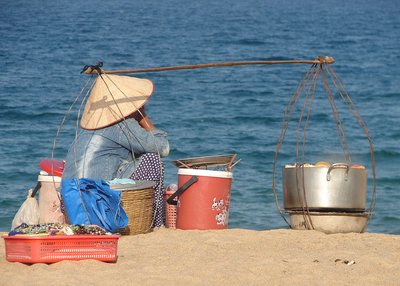 I’ve been hanging around in Nha Trang for about ten days now. I’ve enjoyed eating a variety of food here: French, Italian, Mexican and Japanese, a nice change after two months of rice and noodles. And while writing this I’ve been listening to an improbable England victory on Test Match Special on BBC Radio. It will be hard to garner the motivation to leave. 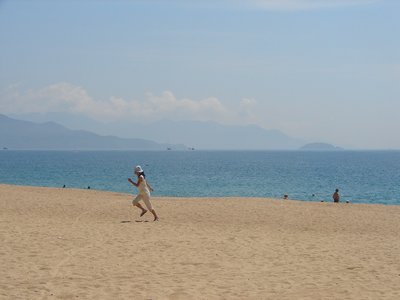 In between vast stretches of lazing around, immobile as if in the Jovian gravitational field, I’ve been following the Live and Let Die training regime (qv) – minus the fags and most of the booze – and feel in better nick than I have for a few years. A downside: with newly-sunken cheeks (well, ish - a slight concavity) I'm looking every one of my years and more, and can't go around pretending to be 21. 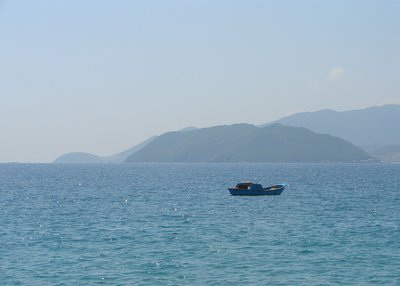 Most of the time it's just westerners and Asian tourists who bask during the day. The locals come out on to the beach around 5pm, and then it gets crowded (although the long lens distorts the perspective). 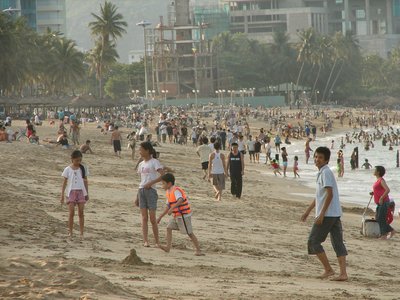 While immobile I have read:

I would like to reread the Master and Commander series in order but you take what you can get out here. 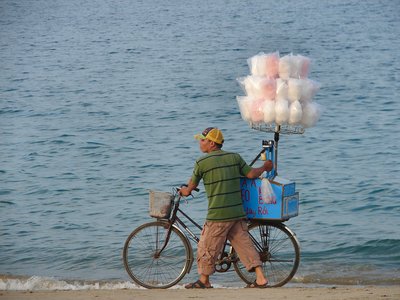 I’ve also qualified as a PADI Open Water diver, or frogman as Ian Fleming would have put it. This doesn’t mean that I’m a competent diver – far from it - but I can rent gear and dive down to 18 metres with another person. I like wearing the wetsuit: it makes me feel like an action man. My diving buddy on the course was Michel, a French-speaking Switzer from Lausanne. Judging by the photos, we were indistinguishable underwater. I'm on the left of this picture, with a red snorkel. 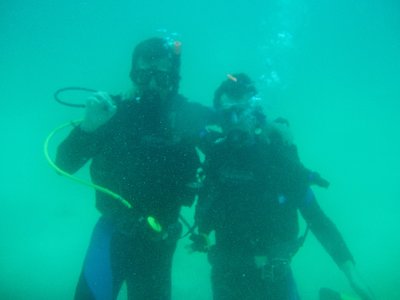 (Incidentally, Michel is vegan. He says he has no trouble in Vietnam. Cream and cheese play no part in indigenous cooking – more’s the pity - and with the exception of the Sinosoups, eggs are self contained, hard boiled or omelette. I'm almost entirely carnivorous. Yesterday lunchtime I had eel pate, with vermicelli, diced black mushrooms and onions, wrapped like a haggis - delicious and savoury - and DIY barbequed squid with salt and chilli. I ate half the squid raw before the barbeque arrived - also lovely, if almost too spicy to eat.)

The visibility is unusually poor for this time of year, because of the heavy rain in the last few weeks. But you can still see a lot of interesting creatures, including fluorescent fish. Among tens that I don’t know, I have seen:

• Several demon stingers (Inimicus didactylus). These have very poisonous dorsal spines; one sting and you’re in hospital for six months, if you’re lucky. They walk slowly across the bottom on their pectoral fins. They flash the fins as a defensive warning gesture. When they aren’t flashing, they look just like sand. 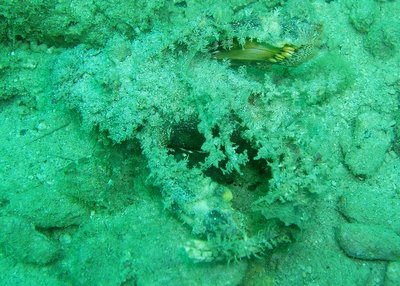 • Shrimp fish (I think). They swim in schools, vertically, head down, looking like ribbons. 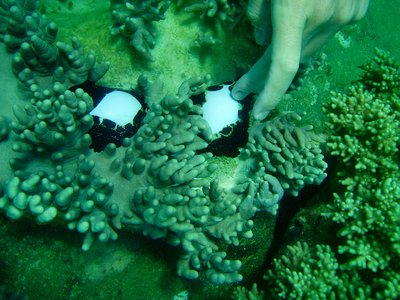 • A grouper with a fish in its mouth.

• An oriental searobin, which looks a bit like a moth underwater. 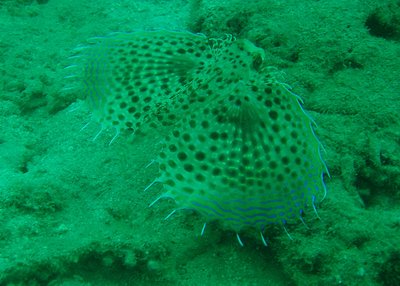 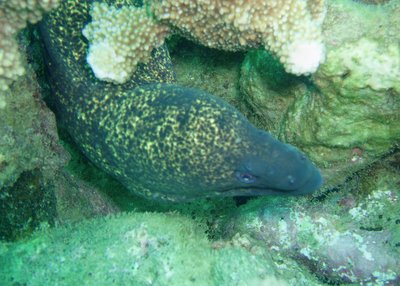 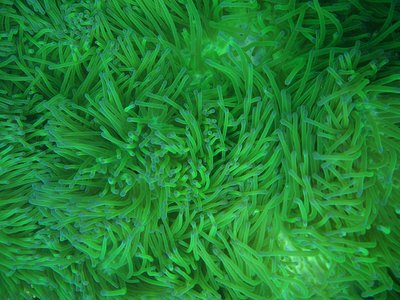 When you’re diving you concentrate on breathing slowly, moving slowly, keeping any movement to a minimum, keeping your pulse down. It doesn’t feel like exercise at all, yet it’s very tiring. One guy told me it’s because it’s harder work breathing denser air and moving through water under greater pressure. Another guy told me it’s because of the build-up of nitrogen in the body. (It’s the nitrogen released from solution upon ascent to the surface that gives divers the bends.) 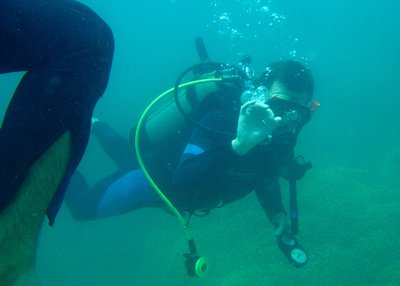 The pictures were taken during our dives by Khương, our instructor. 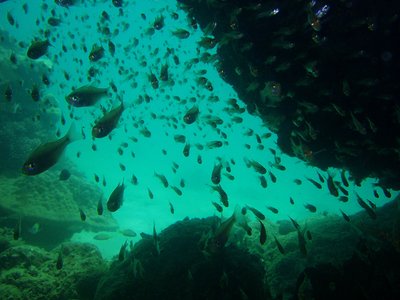 I have undergone two massages while travelling, one in Bangkok and one here. Both have involved violence. In Bangkok, the masseuse tried to tie me in knots; you might as well try bending the QE2’s anchor. Here in Nha Trang, a skinny but extraordinarily strong young woman beat me up. First it felt as though she was trying to thrust a fist between my ribs in order to extract my beating heart in some kind of Mesoamerican sacrifice; then she tried to thrust her thumbs through my temples as if breaking open a roll.

If this is the experience at reputable establishments, it’s no wonder there are so many disreputable ones.

27 May: I wrote all the above yesterday. The ease of life in Nha Trang made me indolent. It was time to get out. So, seizing upon a temporary burst of energy, I've hauled my wind to Buôn Ma Thuột, the coffee capital of the country. As you can see on the map, I've gone on an ursa major meander over the last three weeks, ending up only 250 km south of Kon Tum. It's taken 16 hours by bus, at an average of 40 km/h.

Every intercity bus journey I've taken in VN, except the hop between Hanoi and Ninh Binh, has been pretty hideous. Today promised better. There were only 13 people in the bus and I had a whole seat to myself. But an hour into the trip a woman sitting right behind the driver vomited out of the window. The eggy bile hit the turbulent air behind the wing mirror and splashed upwards and back through the windows. All of us on the window side got splashed. After that I was close to hurling for most of the remaining four hours.

I like Buôn Ma Thuột so far. It's been just about cool enough to wander around without serious discomfort; we're at 450m here. I had a good coffee at a cafe that overlooked a little gully, filled with coconut palms and coffee plants. I tried what the men at the table next door were drinking: 'chanh rum', or lemon 'rum'. I don't know what this is but I don't think it's rum. The drink was red and fruity like strawberry or grenadine.

Then I wandered around a local market. I wanted to buy a belt. But the only belts on offer here are D&G, Versace and Armani, with huge buckles: way too bling. If you want a t-shirt, it's Polo or Lacoste. I bought a red Lacoste for £3. Is it real? I don't care, but I would think so. The big labels are unlikely to want to manufacture anywhere outside China or Vietnam. I got a lot of attention at the market naturally. I ended up unconsciously standing up straight and throwing a chest - I've got bigger tits than most VN women - which ends up exaggerating the height difference and attracting even more attention. But unlike Kon Tum, everybody at the market was friendly.

Also on sale at the market: miracle vacuum cleaners; large pink quartz sculptures; ginseng honey. Ginseng grows well on some of the hills in Dak Lak province, of which BMT is the capital. I was told in Kon Tum that the minority peoples (lots of Ede and M'nong around here) overcropped it. So the government took back control of the land and production.

Posted by Wardsan 23:57 Archived in Vietnam