Most of the museums here have some revolutionary content. Every city has its HCM Museum, and plenty have Army Museums. The presentation of 20th century history is exactly what one would expect in what remains a one-party state in which civil rights including freedom of speech are not protected.

My reaction to the propaganda has varied widely, perhaps just depending on mood. At the Army Museum I found it dull and objectionable. (The war with America was said to be “American aggression”. That's an arguable point, depending on what happened at the Bay of Tonkin. But argument in Vietnam is not allowed.) Tediously, the Americans are always imperialists and the French always colonialists. It induced the opposite affect to that intended, simply making me feel hostile towards north Vietnam. “The world supported Vietnam” said a caption, meaning no doubt that part not under the control of the American imperialists and their fascist traitor lackeys, which would include its allies Thailand, Taiwan, Australia, New Zealand, South Korea and the Philippines. There were indeed affirmations of solidarity and typically tasteless gifts from such then-luminary nations as Algeria, Venezuela, Hungary, Mongolia, the USSR and Cuba.

They exhibited photos of Americans protesting against the war, and quotes from LBJ’s diaries. They failed to note the evident irony that the protesters were exercising rights denied to the population of Vietnam, or that LBJ’s diaries are available because the US has freedom of information laws to limit the abuse of power by government.

Nor do I care to see pictures of identifiable prisoners of war. It is demeaning. Indeed publishing demeaning images of identifiable prisoners of war would seem to be contrary to Article 13 of the Third Geneva Convention, which inter alia requires POWs to be protected from public curiosity. These images were exhibited at the time, in propaganda posters, and in broadcast ‘denunciations’ made under duress (recall similar images of RAF servicemen in the first Gulf war, and of sundry Al-Qaeda victims).

In saying this, I do not want to apologise for the French regime or the Diem regime in the south, let alone for the US presence. Just that, while they were justifiably fighting for independence, the government of North Vietnam imposed on the citizens under their control an antiaesthetic, boring, prolix totalitarianism modelled on Russia’s, inevitably immiserating the population further. They transported whole sections of the population to labour camps. They also fought war without limits, using assassination as a tool of terror and systematically torturing opposing prisoners. Ever-smiling Uncle Ho was not much less of an arsehole than Uncle Joe, but he has a much better press.

Fighting for independence can be justified in itself, without trying to portray France and the US as the source of all evil; but of course that would not be compatible with the raison d’être of the totalitarian state, which needs enemies to justify its arrogation of power and circumscription of liberty. (Of course, the same is true, to a lesser extent, of the US and UK administrations in their attempts to circumvent habeas corpus.)

This is an installation made from the remains of downed enemy aircraft. There were a lot of them. The Viet Minh destroyed 435 French aircraft and the NVA and Viet Cong destroyed 33,068 US and ARVN aircraft. 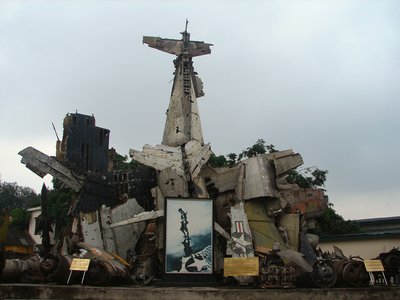 This flag tower, within the grounds of the Army Museum, was built by Emperor Gia Long between 1805 and 1812. It is a symbol of Hanoi. 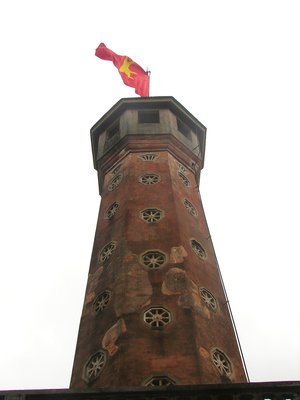 This is the engine casing of a downed US aircraft. 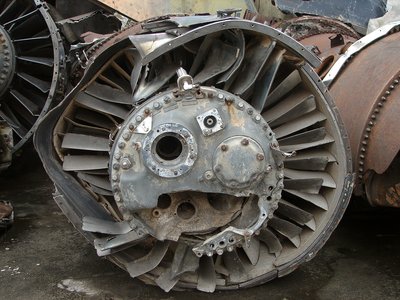 This is a canister of "riot control agent" - CS gas. There were also bomb casings, including cluster bombs. According to VN figures at the Army Museum, the US dropped six tonnes of bombs per square kilometre in North Vietnam, or 45kg per head of population. 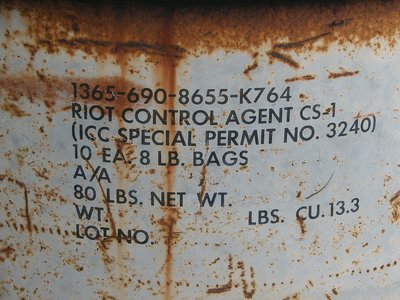 I felt similarly, although perhaps more ambivalently, at the Hỏa Lò Museum, known in the west as the Hanoi Hilton. Its famous residents include Senator John McCain and Douglas Peterson, who returned to Vietnam in 1995 as the US Ambassador. Four of the US prisoners in northern Vietnam went on to become Congressmen.

Most of the prison has been demolished to make way for the Hanoi Towers, but a small part remains. It is mostly concerned with those imprisoned there under the French regime. 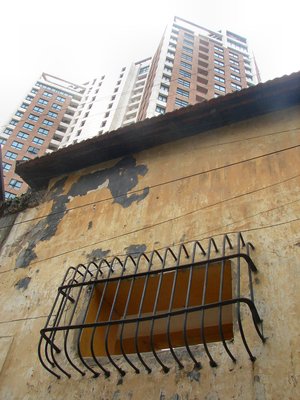 It was built by the French as a prison. They built over a village which had previously been known for its ceramics. I don’t set much store by that: cities swallow villages as they grow.

All of the VN imprisoned here were ‘patriots’ and ‘heroes’. Not a single criminal among them, apparently. The inmates were “confined and persecuted both the body and the mind of thousands of revolutionary patriotic soldiers.”

And of course, the political prisoners were fighting for their country’s independence – a noble end. But there was a small exhibit, for example, on the seven who were executed in 1913 for throwing grenades into the Coq d’Or hotel. They killed a lot of people, including a senior Vietnamese administrator. This execution was presented as an act of colonial injustice, and the guillotine is preserved at the prison.

But mass murder - even, or especially, for political ends - is a grave crime. The culprits were executed after due process of law, in this case at Tonkin crown court. At that time France retained the death penalty for serious offences, as did the UK, for that matter. A Frenchman who had bombed people in Paris would undoubtedly have been executed, and I believe the method used in France would then have been the guillotine, which was after all invented as a “humane” (pain-free) device for executing people.

The VN prisoners undoubtedly suffered harsh conditions, inadequate nutrition and medical care. They were also subjected to torture. Or, as the exhibition puts it: “Living in the imperialistic prison under a severe punishment and maltreated life but revolutionary patriotic soldiers still kept steady their sense of purpose and uprightness, turned their prison into a school where propagated revolutionary argument.”

The American POWs on the other hand were “remanded in custody”, as if that were somehow different (technically it is, the difference rendering its use here inappropriate - but the reality is you're still in jail). The Americans were royally treated, as if in a hotel. “During the war the national economy was difficult but Vietnamese government had created the best living conditions to US pilots for they had a stable life during the temporary detention period.” There are photos of them playing volleyball, and celebrating Christmas, always with a smile.

This part of the museum is a contemptible falsehood. Prisoners were kept in appalling conditions. Almost all prisoners were subjected to torture. USAF Maj Cherry was tortured for 93 days in a row, and kept in solitary confinement for 53 weeks on end. Tortures included the rope torture, in which the prisoner was bound and then suspended from the floor by the elbows, causing excruciating pain and restricting breathing. One in six US PoWs died in captivity. For others, the effects of torture endured. John McCain is still unable to tie his own (neck)tie.

Prisoners also featured in propaganda photographs and films. And they were forced to participate in a parade in Hanoi, during which they were abused, spat upon, and pelted with bottles and bricks. So much for Article 13: "Prisoners of war must at all times be protected, particularly against acts of violence or intimidation and against insults and public curiosity."

On the other hand, the Ho Chi Minh Museum in Hanoi was a pleasant surprise. I only went there because the One-pillar Pagoda was a disappointment. It was built in 1049 under the Ly dynasty. It was destroyed in a Naziesque act of cultural vandalism by the retreating French. It was rebuilt in 1995, only smaller; and while the original pillar was stone, the new one is concrete. Not what you would call successful restoration. 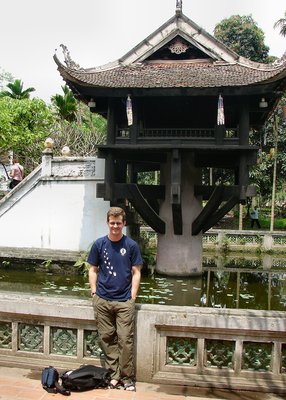 The HCM Museum is adequately although incompletely captioned in English and French; but in any case it is a highly visual presentation, put together with imagination. One area, for example, represented Coc Bo, the cave in which HCM lived (when not in prison) between 1941 and 1945; and at the same time a human brain. 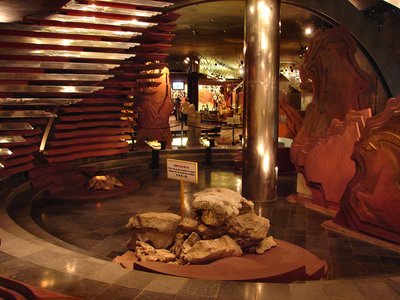 There is a well-known exhibit of a Ford Edsel bursting through a wall, representing the failures of American capitalism. (They had to pick their turkey carefully, since Ford has sold more cars than Vietnam has ever made and the US is twenty times richer than Vietnam; but on this occasion I forgave the artistic licence.) 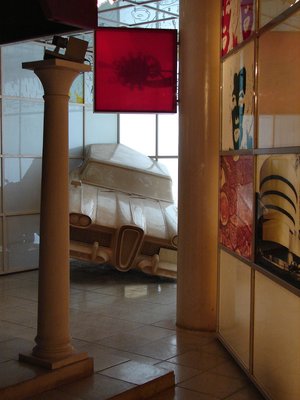 Before he adopted his final handle, his last of 50, HCM called himself Nguyễn Ái Quốc: Nguyen the patriot. He was away from Vietnam for 30 years. Nguyễn Ái Quốc was the name by which he wrote articles for the French newspapers and under which he attended Comintern meetings. He could certainly speak and write French, Chinese and English, and also, it appeared, Russian. He changed the Russian spelling of his name from Нуен-Ай-Квак (July 1924) to the improbable Нюэн-Ай-Квак (December 1924). Well, I found that interesting anyway.

I would have liked to spend longer with HCM, but they had to close for lunch, and then for the afternoon. When it comes to the museums, you have to pick your visiting times carefully.

One place where you would expect triumphalist propaganda would be at a site devoted to the last kings of Vietnam, the Nguyen dynasty. The Nguyens lived near Hue from 1744, when they were merely the Nguyen lords of southern Vietnam. Nguyen Anh retook the city from the Tây Sơn rebels in 1802 and then crowned himself Emperor Gia Long. The Citadel was built from 1804, and the Nguyen dynasty lived in splendour in the Imperial Enclosure within the Citadel. The Emperor himself lived in the Forbidden Purple City within the Imperial Enclosure - all very Chinese. In 1945, the last king abdicated from the balcony fronting the main gate of the Citadel.

There is little commentary of any sort around the site, but what there is merely presents facts, and does not see the need to add ‘imperial feudalists’ all the time.

Unfortunately the museum at Khe Sanh displayed the worse side. The photo captions were ridiculous. One claimed “the American soldiers’ panic shows on their faces at the Khe Sanh front in 1968”. Another purported to record US soldiers panicking as they abandoned Khe Sanh. Actually they abandoned it in an orderly manner and blew it up. 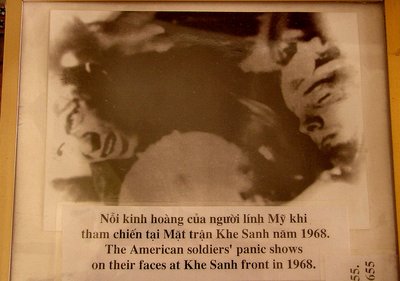 Apparently the twisted commentary gets worse around Ho Chi Minh City. In the south, the people were fighting on the wrong side. So they have to receive more indoctrination in order to ensure their solidarity.

Posted by Wardsan 17:22 Archived in Vietnam