Back on the South China Sea

12-14 May: Escaped from Alcatraz, I headed to Quy Nhơn. The journey was no fun. The driver tried to charge me twice the right amount because I was foreign. This is commonplace, but stupid because I told him that I knew the right price ($5 for a five-hour ride). Since he persisted, I walked 50 metres, bought a ticket at the ticket office and waved it in the driver’s face. This kind of bullshit happens several times a day and sometimes I feel I am close to snapping under the accumulated frustration. As it is I call them obscene names. The public minibuses are fitted out to take 16 small people, but they cram 22 in. Then they turn on the music, at maximum volume, and then they smoke. At least there’s no livestock.

I liked Quy Nhơn immediately. I’m not stared at or hassled very much, and there is a palm-lined corniche like Nice. 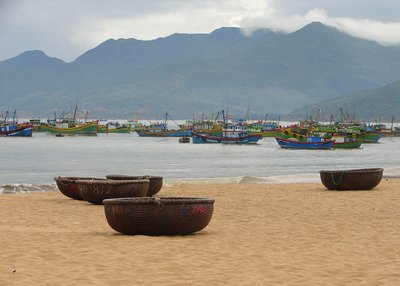 There are large numbers of fishing boats and fish traps in the bay, and the odd guy wiggling his oar in a coracle. 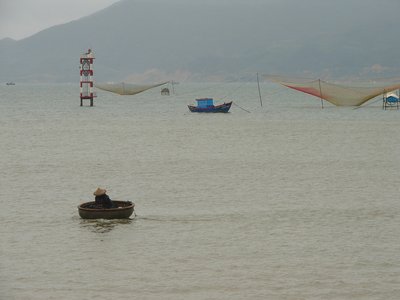 I had a cocktail on the eighth floor of a posh hotel just after sunset, and things were good again. (The hotel is called the Saigon Quy Nhơn and the cheapest room costs $35 a night. This is great value because there is a pool, gym, free wifi, obsequious service etc. But my place cost $11 a night and for that I got a big room with a balcony.)

The cocktail would have been a perfect moment but for the Kenny G/Michael Bolton soundtrack and the waiter hitting on me. Nice chap actually, I met him the following day with a friend of his, both very camp. It's refreshing to see people being quite so openly camp in VN, where I've hitherto got the impression that homosexuality is strongly disapproved of (Thailand, by contrast, is the most relaxed place on earth). But I don't enjoy being chatted up, particularly when trapped, and the unwanted attention did end up placing the nicest place in town pretty much off limits.

There's a pair of 800-year old Cham towers near the edge of town, bang in the middle of a block. On the way there I saw a guy riding a bicycle with three sofas on it. You see a lot of overloaded bikes here, but three sofas is something. 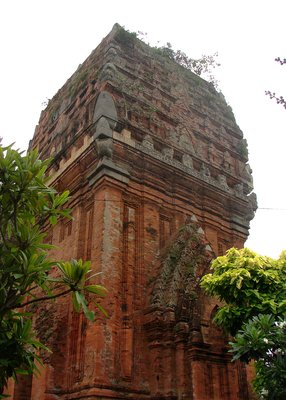 The sea is said to be too polluted to swim in. This was no constraint: in the 40 hours I was in Quy Nhơn it rained every minute. I walked along the beach in the drizzle. Over the water, a flock of white birds – cranes perhaps. On the sand, hundreds of crabs; as soon as they see me they scuttle sideways into the water at an amazing speed – 10-12 km/h I would guess. 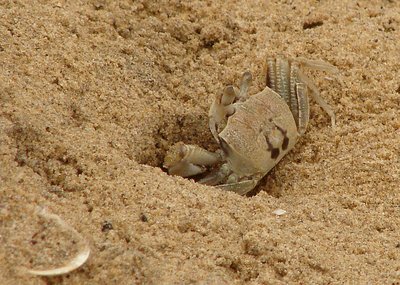 A further gold star for the town: the seafood is very good. I had my first taste of nautilus: like strong whelk. And because there are very few westerners, prices are reasonable: I had a rice & veg meal including beer for 19,000 dong (60p). 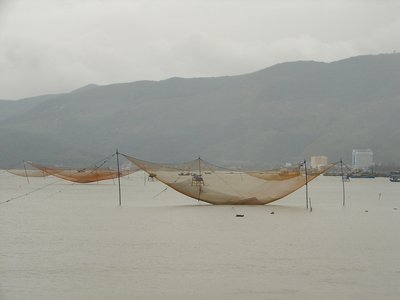 The museum took up about half an hour. Some of the best stuff is piled up unlabelled and unguarded at the back. This is all 800-year-old Cham sculpture. 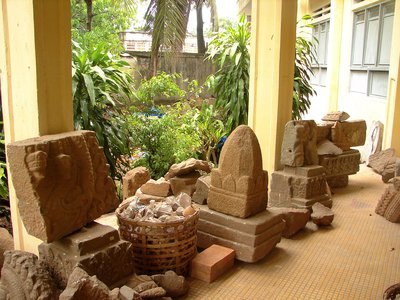 There is a pagoda, Long Khanh, with a 17-metre-high statue of Buddha in front of it. As often, he has a swastika on his chest. The twentieth-century appropriation and abuse of the ancient symbol by the Nazis has not tainted or prevented its continued use in this part of the world. But if you’re a westerner you can't help but stare. 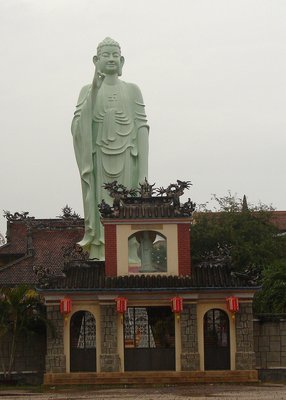 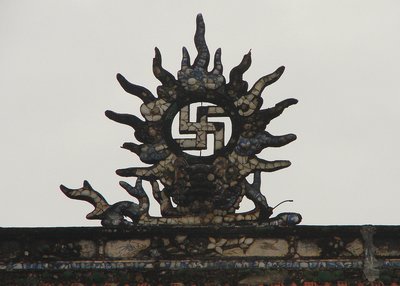 On 13-17 May it’s the tenth UN Day of Vesak – a UN day because in 1999 the UN acknowledged the Buddha’s birthday as an international day of culture. They celebrate the Buddha’s birth, enlightment and passage to Nirvana. This year it is being celebrated at a convention centre in Hanoi and there are posters all over Vietnam commemorating the event.

So it’s the first day when I visit Long Khanh pagoda, and lots of people are visiting to leave gifts. A monk attaches himself to me. He’s called Tu and speaks enthusiastic but execrable English as he shows me around the pagoda. He is off to Saigon to study more Buddhism and English. 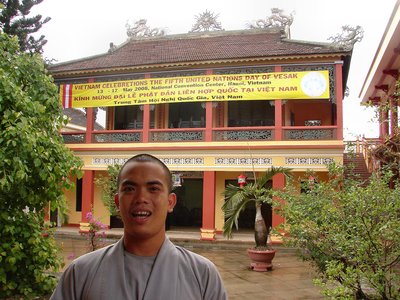 I would happily have stayed in Quy Nhơn for a while if it had ever stopped raining. A tropical storm for an hour every afternoon is no problem. But when bracketed by 23 hours of rain it saps the spirit and sogs the sandals, and there isn’t much to do.

So I headed south to Nha Trang where I immediately saw my first western faces in five or six days, spoke English and wolfed a plate of pasta. It’s like a somewhat squalid Khao San Road (qv): tour shop, dive shop, souvenir shop, restaurant, bar, hotel. It’s welcome light relief after some slightly challenging travelling. It's squalid both because of the dirt in the streets, and because after dark all the xe om drivers turn into pimps and drug dealers.

On 14 May it still rained. The locals are saying it was because of the earthquake in Sichuan. Can this be true?

15 May: Today, though, there was thin cloud cover for most of the day and sunshine for parts. I spent a lovely day on a lounger at the beach. It slopes steeply into the sea and so big waves crash and hiss even without much of a swell on the sea. They knock you flying if you are not careful. 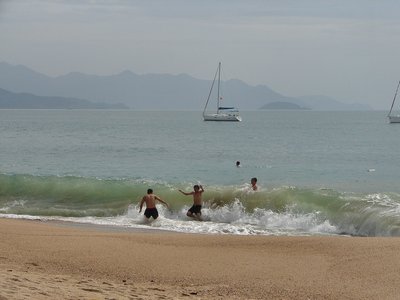 Vendors come along about every few minutes. Sometimes they even have things you might want, like grilled rice paper. The tropical sun is not to be trifled with, and I did so trifle, so now I look just like an Englishman abroad.

Vietnamese beachwear is different. The men wear what they like. The women generally swim in whatever they are wearing, although I did see some big one-piece swimsuits-n-skirts today. I suspect this pattern holds true all the way round the coast to South Africa. 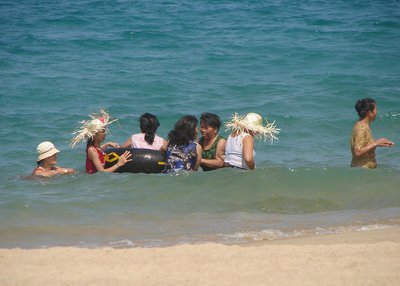 This woman is dressed as if prepared for a gas attack, and this is not unusual. A high proportion of women wear face masks. (Men only do so if they are working in the streets.) Even in the middle of a national park. It seems disproportionate to the threat of dust; in fact I haven’t had to reach for the Ventolin since Bangkok. It’s as if they’ve taken the veil. 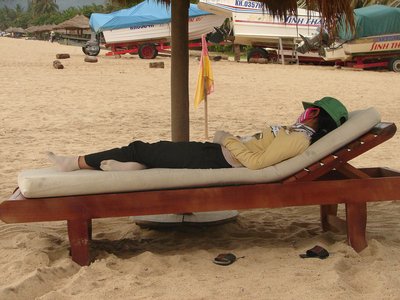 Randy, of Randy’s Book Exchange in Hoi An, was kind enough to bus me the notebook that I’d left in his shop a week ago. Even more kudos to him.

There are a lot of Russians here it seems. Several of the places have Russian menus, and two have Russian names. For the first time since I got to Vietnam, I’ve heard Russian being spoken.

One lot there aren’t any of in VN is Italians. In the book exchanges you see a lot of English books, plenty of German, Dutch, Nordic and Finnish, French, Russian, some Hebrew and Japanese. No Italian. I met one Italian couple in Hoi An. We chatted in Italian, which pleased me immensely. Where are the Italians? I asked. In Italy, they said. And it’s true: the Italians take domestic vacations while the Germans, Dutch and English head abroad.

16, 17, 18 May: In one of the earlier novels – Live and Let Die, at a guess – James Bond prepares for a daredevil amphibious mission by living in a beach house and swimming and running for a week. That it takes him only a week to get into shape is improbable, because Bond smokes upwards of 70 cigarettes and drinks half a bottle of vodka a day - much less than Fleming himself drank while running a publisher. (Bond has his own cigarettes made by Morland’s, with three gold bands at the filter, from his own blend of Balkan and Turkish tobacco. His prissy obsession with having the right clothes/car/café/cocktail is probably not unrelated to his sadistic/psychopathic tendencies. Indeed, he shares his brandmania with the narrator of American Psycho.) Anyway, I’ve done the same thing today and after two months of travelling in hot weather it feels great to get some exercise. If it takes high-tar Bond a week, I thought I’d try to maintain the regime for three days. But the big sand, great lumps of silica, blisters the soles of the feet; I can’t run on it a second time. 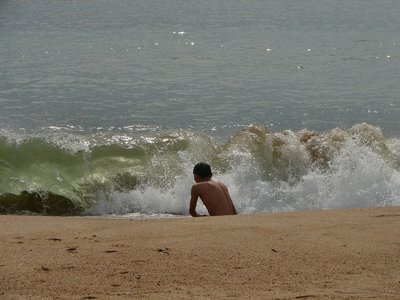 The prices at the two beach restaurants are very high, particularly at the Sailing Club. 80,000 (nearly $5) for a plate of fried rice; 25,000 dong for a can of coke or a bottle of water - outrageous. Yet there is a good restaurant down the road, the Khanh Kat, selling food at normal prices: a mojito, a bottle of beer, seafood soup, fish-and-bacon kebabs and some fruit for 105,000 dong ($6.50). That the two beach restaurants can behave like local monopolists is testimony to the inertia of the average consumer, which creates the low price elasticity of demand that supports high profit margins. 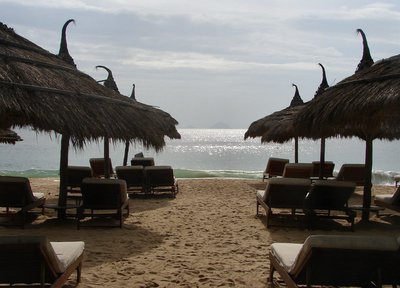 Posted by Wardsan 18:43 Archived in Vietnam