I travelled to Cúc Phương on the back of a motorbike, driven safely (mirabile dictu) by Hong. 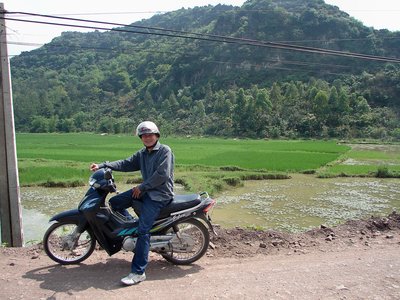 The journey was great. It’s 45 km from Ninh Binh to the boundary of Cúc Phương National Park, and the landscape – paddy fields, hills, cyclists in bonnets – is very pretty. 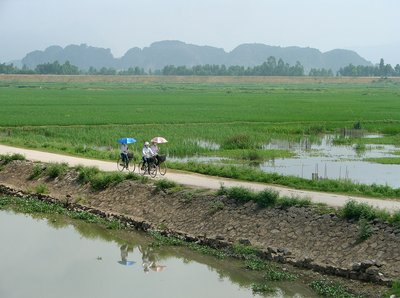 All the low-altitude parts of northern Vietnam look like this. Paddy-fields separated by dikes; the country is one enormous piece of hydraulic engineering. It is impossible to conceive what it looked like before wet rice cultivation.

We ride along the dikes. On one side, carpets of flowers. On the other, carpets of litter.

At the entrance you buy a ticket, surrender your passport and book your place for the night. I chose a stilt house in the middle of the park, costing $6 for the night. They warned me that there would be no electricity. Fine – I had a torch.

Just outside the entrance is the Endangered Primate Rescue Center (sic) run by biologists from Frankfurt. The primates at the centre are langurs, gibbons and lorises. Lorises are nocturnal, so I saw none. The inmates either have been bought from markets or were born there. Primates are captured and sold, usually for the purported medicinal qualities of their organs or secretions. Some are very rare: Delacour’s langur, for example, has a population of about 60 in the National Park. They are rehabilitating some langurs in a larger enclosure with the aim of releasing them back into the wild. This is Delacour's langur, with the white shorts. 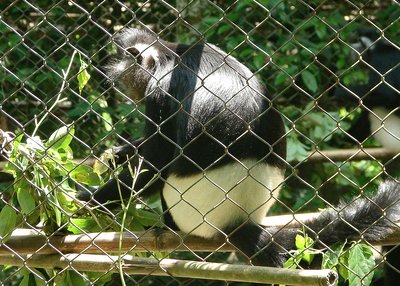 I was introduced to my guide, Hương, who took me through the centre. She was in a hurry; her explanations were cursory. We started with the langurs. Langurs have very long tails, used for balance only. She showed me white-faced, black, five-coloured, Ha Thin, Delacour’s, grey, grey-shanked and red-shanked douc langurs. I’m not entirely sure which is which.

This infant, three months old, was born inside the centre. 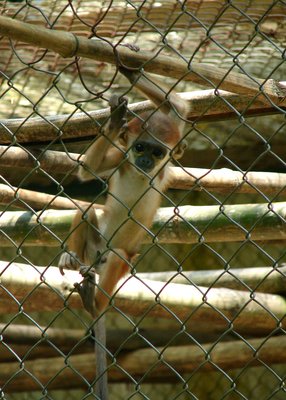 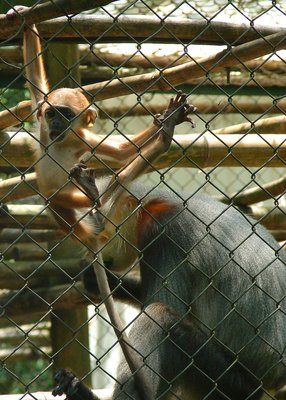 Gibbons are the only indigenous ape in the region, other than Homo sapiens. They have no tails and comically long arms. 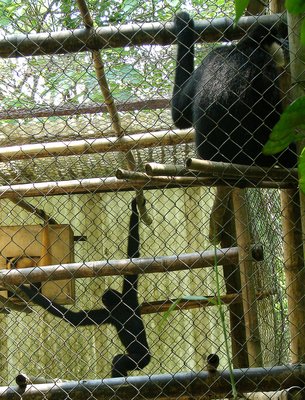 Some of them are rather aggressive and they have to separate the males from the females. Mature males are black, the others ginger. This is an adult female. 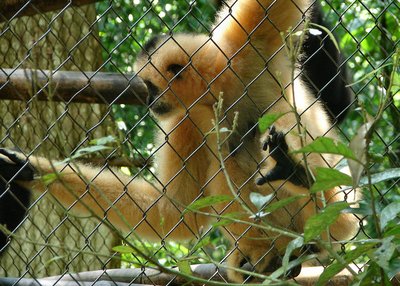 After visiting the centre, we entered the park. We stopped off near a cave in which stone age artefacts were discovered. 5,000 or 7,000 years old, from memory. The objects found included three ritual burials, evidence, they conclude, of ancient religious feeling. Nothing remains of these objects in the cave.

The cave turned out to be a large complex with no lighting. I walked from one chamber into another, and into a third, and before I knew it I was lost. There was no-one else around. No exit signs. No hint of light from outside. No sound but the occasional drip signifying growing stalagmites. It was extremely slippery. It is not easy to remain rational in a cave; the fear is probably deep-seated in our species. I didn’t panic – I made a short Blair Witch video instead - but I did feel thoroughly uncomfortable until I found my way out.

You have to confront your fears – a piece of wisdom that came to mind. But if so, why? Life is much easier if you don’t, although you feel good after you do.

I'm also scared of spiders. But I wasn't scared of these large skinny ones, which was fortunate because they were everywhere. Timorous beasties, they floated along like hovercraft. [Actually, they are not spiders, but harvestmen. Although arachnids, they are more closely related to scorpions.] Far worse were the small spiders with long abdomens, half-way to scorpions. They jump. They kill mosquitoes but they can also kill dragonflies, I believe. 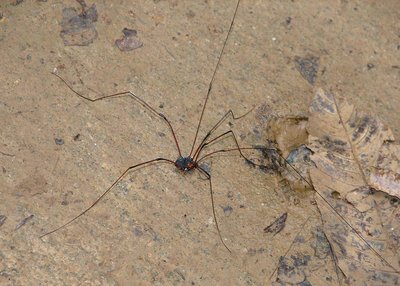 We biked the rest of the 20 km through butterfly daisy-chains to the isolated spot where I was to spend the night. There were 15 Vietnamese and me, the only guest. The noise from cicadas and birds was almost oppressively loud, like a Hitchcock movie. 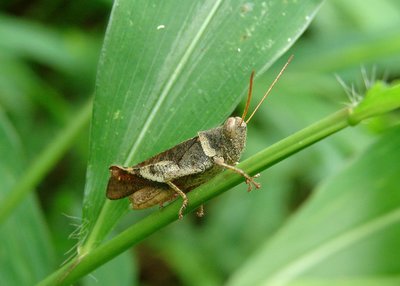 After lunch I walked. The forest is dense. For every tree growing upwards there are ten epiphytes in the crannies, some sending creepers downwards.

You hear industrial sounds all the time: powerdrillls, lawnmowers, chainsaws, electric shavers, rattles, maracas, hooters. That is just the birds. They sing constantly in the canopy, but you cannot see them.

I took photos of what I could see: arthropods. Stopping every few minutes, I made very slow progress. Even at a mile an hour, sweat dripped off my nose. 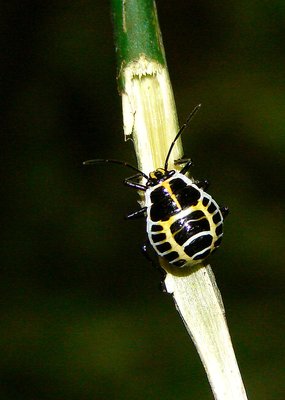 When a big leaf crashes down from the canopy it has several collisions on the way down. What with these constant noises nearby and the limited visibility, if someone were out there trying to shoot me, I would go crazy within a day. That’s what soldiers faced in the war. They took heroin to cope.

I duelled with a green dragonfly, Orthetrum sabina sabina. 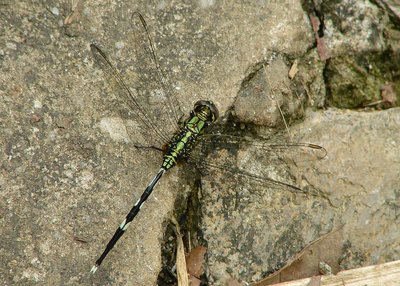 Dragonflies are fierce predators: they eat other invertebrates. Small ones eat midges and mosquitoes; larger ones eat butterflies and even small dragonflies. Their larvae will eat absolutely anything smaller than themselves, including fish. They hunt by eyesight. 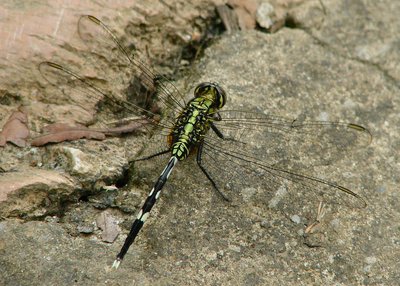 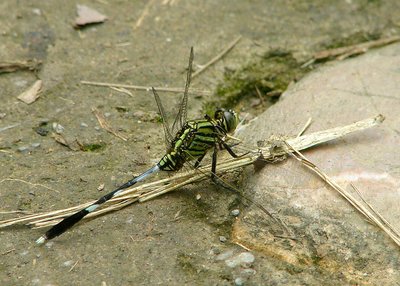 In French they are libellules, and the name is almost identical in Italian, Spanish and German. The Linnaean family name is Libellulidae. While the French word is delightfully liquid, I chauvinistically consider the English words dragonfly and butterfly best of all possible words. 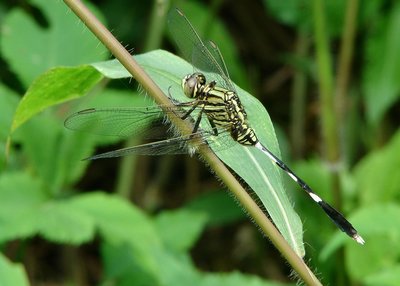 My devil’s darning needle was afraid of nothing and engaged in several warning flights before settling on the same spot each time – so I heroically stayed at that spot and took photos. Some people think that dragonflies can sting, but they can’t. They can bite, but not hard enough to break the skin. 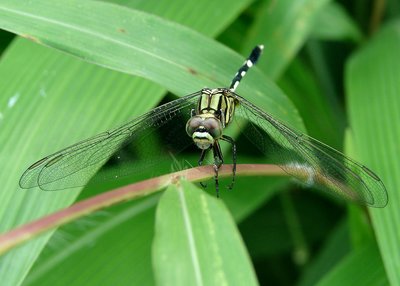 The dragonfly photos can be seen full-size in my photo gallery, but in case you can’t be bothered to click, here is a blow-up of a wing. I hope the gold flecks in the wings are visible. 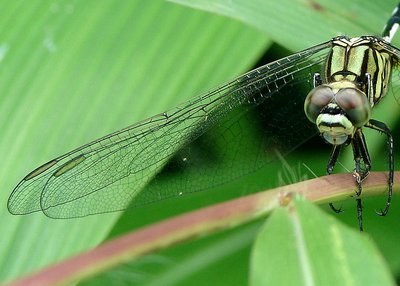 Along the route I passed my notional goal: a thousand-year-old tree, Terminalia myriocarpa, an East Indian almond. Said to be 45 metres tall, but you could not see that far up. Its roots began to buttress off a couple of metres from the ground, so it was 5 metres wide at the base.

By a large pool there were attractive magenta dragonflies: Trithemis aurora. 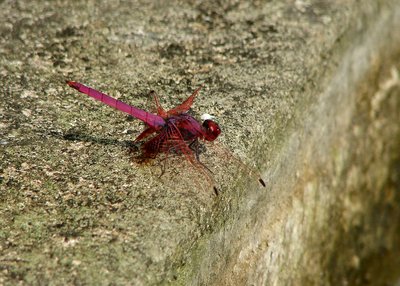 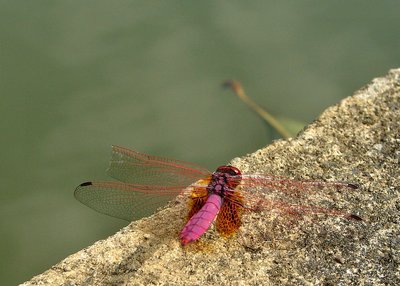 Among other animals, they can take water skaters on the wing. In this photo you can see predator and prey. 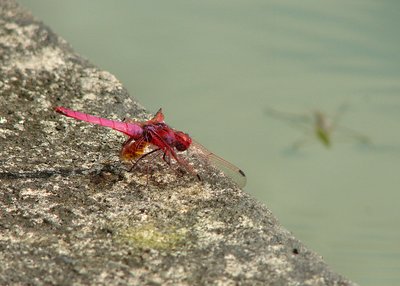 Flying, but never settling, were black and yellow ones looking like butterflies: Rhyothemis variegata arria.

Mosquitoes by the million. I had made the crass mistake of walking in shorts. There is no malaria here, fortunately. Do monkeys get malaria, I wondered? Yes, they do. (Not only that, but there are grounds to believe that infection with Plasmodium knowlesia is far higher in Asia than previously thought.) [Monkeys obviously get immunodeficiency virus and Ebola, both of which we got from them. They also get STDs including syphilis, anthrax, schistosomiasis, yellow fever, herpes and pinworms. The mosquito that passes on the parasite that causes elephantiasis in humans passes the same parasite to monkeys, but they do not react in the same way. Elephantiasis is an immune reaction.]

Of the few birds I could see, most were shrikes. They fly around the trees like sparrows. But I did disturb a silver bird the size and shape of a peahen: either a silver pheasant or, more probably, a grey peacock-pheasant. On the second day I twice disturbed a chestnut bird that flew away with the metallic flapping characteristic of a pheasant taking off.

I came across a well-camouflaged chameleon. 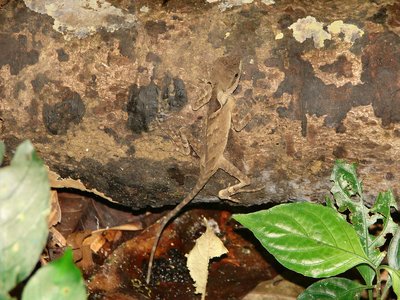 As I approached, it relied on its camouflage and stayed still. A perfect subject. 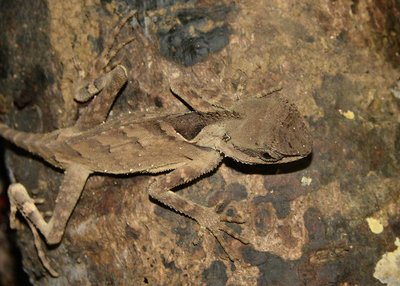 Once I got very close, it stood up, perhaps to look big, or to prepare for flight. 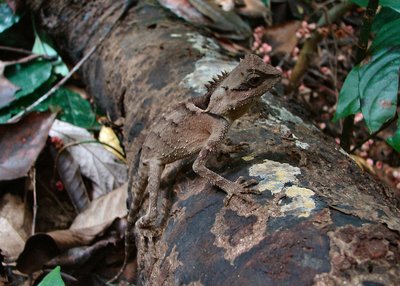 The paths were well marked and it was impossible to stray. But around 4 pm I began to get concerned that I didn’t know where I was. I hadn’t seen a soul. I spent the next half an hour walking sharply downhill, which made me very concerned. But I was just walking down into the same valley: I had climbed in the morning without noticing, so invertebrate-obsessed had I been. 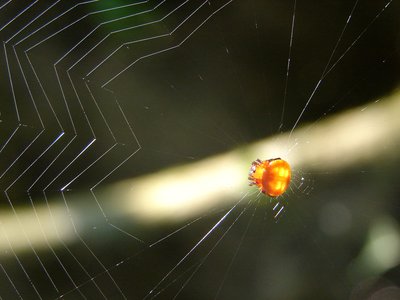 In the evening, tired and elated, I had dinner back at the camp. Without electricity, there was no hot water; this was no hardship. There were seven Vietnamese staff around. One of them, Thảo, came to talk to me. She spoke little English, but enough to seem deeply, deeply weird. I ordered a beer from the fridge. It was very warm; the fridge had fooled me.

Accompanied by two dogs and preceded by my lunar shadow, I walked back to my concrete stilt house. The path was lit from the sides by fireflies, blinking on and off at 1-3 Hz. The effect was similar to that of standing up too quickly and seeing stars.

I had already decided that this was the perfect place to tackle the rest of The Aeneid by torchlight. The stilt house was empty. My room lay off a panelled corridor that felt like the Marie Celeste. There was no-one within 500 yards. All I could hear was the chirruping of insects and the barking of frogs. But unconsciousness struck instantly.

In the morning small pools of silver covered the grass, each a bedewed spider’s web. 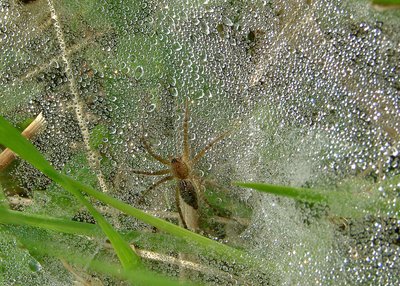 I walked until three on the second day. My three sets of camera batteries were exhausted by mid-morning.

In the afternoon I am walking along a road when there is a loud disturbance in the canopy above. Grunting constantly, a colossal squirrel, a metre long, walks along the branches and jumps from tree to tree, cracking branches and dislodging leaves as it goes. It is black with a chestnut collar and face. If it is a squirrel, it weighs many times as much as a grey. And indeed it is: Ratufa bicolor, the Giant Black Squirrel. It is very rare, and, given the noise it makes, that is not too surprising.

Posted by Wardsan 18:51 Archived in Vietnam