On Saturday morning a week ago I headed east to Hạ Long Bay in a minibus with three women in their early thirties: Antje, Inga, and Jule. I had booked a trip on a tour operated by a Hanoi travel agent. 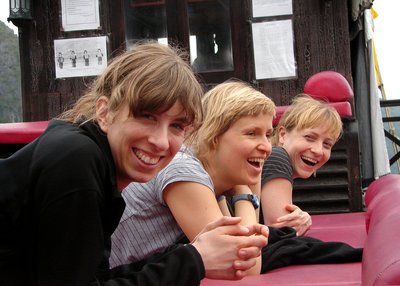 They are from Frankfurt, and speak good but not perfect English, so it is easier for them to talk in German. So I have learnt some German by the passive smoking method. Listening to their soft Frankfurt accents made me feel really ignorant, forcing them to talk English, so I’d better learn some upon return (I have more chance of actually learning some German than bloody Vietnamese). The best thing I learnt was “ear worm” – a good phrase for that tune in your head that won’t go away. In return I taught them “brown trousers moment”.

Our guide is Tinh. He is 27 and has a degree, of course, in English. He is a good chap, and extremely enthusiastic, and proud of his country.

Hạ Long means descending dragon. The old name for Hanoi, dating from 1010, is Thanh Long, ascending dragon. The islands of the bay were created when the dragon landed, carving out valleys. And why would you want to argue with such a poetic explanation?

Hạ Long city seems a bit of a hole. The port is chaos: tens of junks, hundreds of tourists. But after a minor delay to sort out ticketing errors (the difference amounting to 10,000 dong) the four of us have lunch on a large junk capable of accommodating 16. They are nearly vegetarian, at least while in Vietnam, so I get most of the junk food. 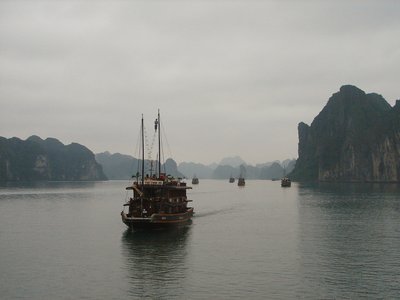 After lunch we set engine, and motor past lumps of limestone, looking like teeth (or, occasionally, cakes) dropped on to a plate of custard. The magnificent scenery is the point of the trip. 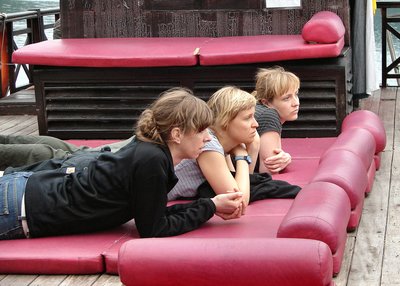 Like the landscape at Sapa, and at the Perfume Pagoda, and around Ninh Bình, it is karst. The whole country seems to be karst.

As far as I know, karst is a landscape of half-dissoved soluble rock, usually limestone. The surface and fractures are dissolved by mildly acidic rainwater. There are lots of caves, sinkholes, and underground rivers. 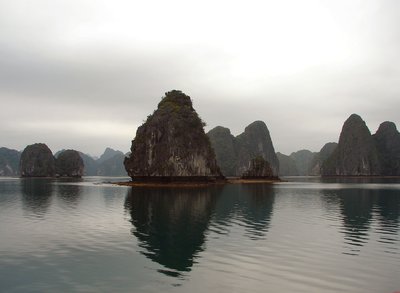 The original Karst – with a definite article and a capital letter – is above Trieste. People there speak Slovenian, and in Slovenian, it is Kars. In Italian it is Carso. The Austrians – temporary possessors of that part of the world where Teuton meets Slav and Latin – called it Karst. But the karst in Vietnam is like nothing I have seen in Europe. 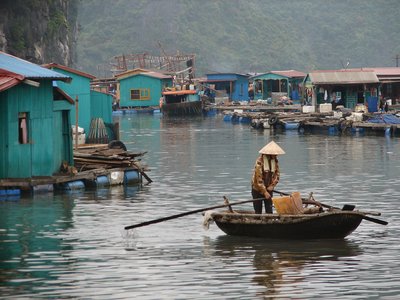 We stopped late afternoon for a spot of kayaking – actually canoeing, in pairs. C2, in the code. Although it was quite fun, it was pretty pointless. It would be a good way to paddle around the many caves around Cát Bà (woman island), but we just paddled around a bit. I would have liked to have done it on my own, and for longer.

After canoeing we switched to another boat, the second of four or five during the trip. Each had a special function: the first was our lunch boat, the second the post-kayaking boat. The boat took us to our private island, Cát Ông (man island), staffed by four or five young guys and a young woman, for us four. This ratio is normal in Vietnam, where underemployment is rife and labour cheap. 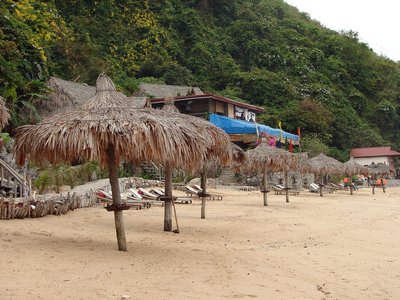 There is a central pavilion, with sofas and a bar, and half a dozen bamboo beach huts equipped with electricity – perfect. This is mine. At high tide the balcony got wet. 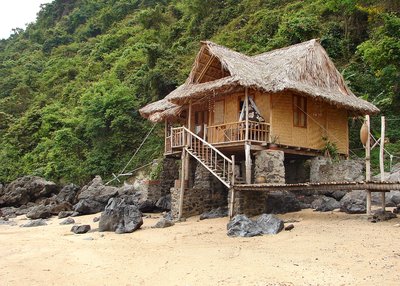 On this holiday I have been drinking cocktails, which I seldom enjoy, simply because the prices are absurdly low. More of the same here.

There are lots of Alsatians around the place. In German they are not named after a former province; they are ‘sheepdogs'. One of the dogs is obsessed with rocks. It thinks of rocks and nothing else; wakes up and thinks of rocks; sleeps and dreams of rocks. And on this rock I will build my life. Every person it meets, you can see it thinking “will this two-leg dog play rocks with me?” And if you do, oh bliss. Canine nirvana.

Dinner is merely adequate, save for one of the best shrimps, beach-barbequed, that I have ever tasted. After a day on the water we are tired and hit the hay immediately, and fall asleep to the sound of the waves. I sleep under a mosquito net for the first time I can remember.

At breakfast the next day a large buzzard, or some such, was circling the beach. 49 falconiforms are listed for Vietnam, so I am none the wiser. 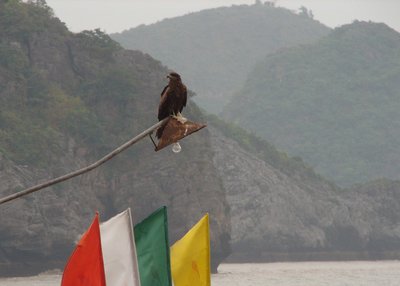 We took a third boat to the harbour near Viet Hai village (Viet sea) on Cát Bà, past lots of fish farms and people rowing in their front to front way. To get to the boat we were each ferried by canoe. Tinh took me. 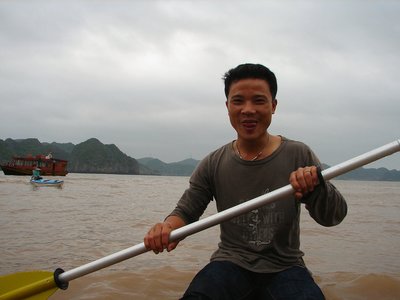 We walked five km along a road to Viet Hai village. 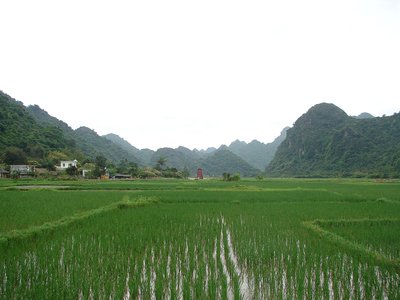 The cicadas were very loud, and I heard birdsong for the first time in ages. 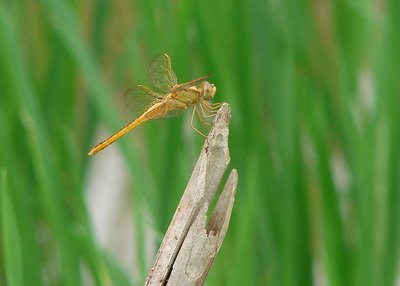 Then we climbed a rocky and slippery path to Navy Peak, maybe 270m high. The climb was not so difficult, but the humidity is high in Vietnam, and higher still in forests, so we were dripping at the top. I’m sure the view from the summit was delightful, but we were attacked by mosquitoes and did not linger. This is Inga flicking her towel at the mosquitoes. One might as well order the waves to retreat. 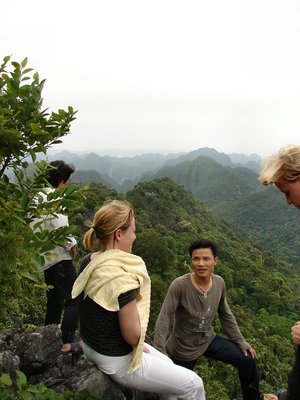 After a huge lunch at Viet Hai we took the boat back to Cát Ông. The wind had got up and I got seasick.

On land I played fetch with the lithophilic dog. In its transports of delight, its teeth came into contact with my hand. I don’t think its teeth marked, let alone pierced the skin, but it made me stop nevertheless. A single bite would mean a trip back to Hanoi and several injections. My rabies injections would just give me more time to be treated. Even a scratch or a lick can transmit rabies if you have a cut. But I think the dog was merely deeply stupid and obsessive-compulsive rather than mad, so I chanced it. No symptoms so far, beyond my usual aversion to unadulterated water.

The wind got up on the final day. The girls’ boat trip was cancelled, and then my bike ride was cancelled too because of the storms. Lightning struck about 150 metres away while we were on the boat. So we just minibused, very slowly, to take the daily hydrofoil from the port in the afternoon.

We stopped along the way to throw stones from a cliff. The tide was a quarter of a mile out. This was my attempt to recreate a famous painting of his wife and of Anna Ancher by P S Krøyer, which hangs in the Skagensmuseum at the northernmost tip of Jutland. It should be retrievable somewhere around here. 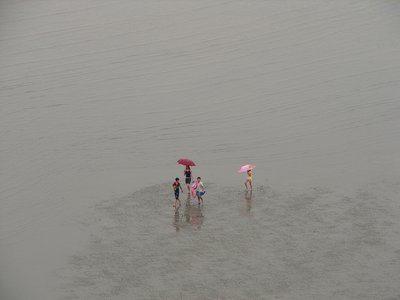 Actually the light was nothing like that in Skagen, so I am not sure why that came to mind.

Then we visited a cave that had been turned into a military hospital by the VC during the American War. There was a small concrete swimming pool. The largest cave was turned into a cinema.

We ate a few yards from the war memorial near the port. We shared some clams, with a sweet chilli sauce, with the various Vietnamese men around the place – our driver, tour guide, guys from the resort and from the restaurant. I’ve never eaten better.

We helped it down with Hanoi Vodka, steeped in the leaves of a local plant that Tinh said cures headaches (salicylic acid – aspirin – came from willows. It’s much more plausible than tiger penis or bear gall bladder). This was a bit like a flavoured Russian vodka, and we drank it à la russe – very quickly. Our driver not excluded. You say “tram van tram” [ie, 100%] or “mot, hai, ba, cho!” before drinking. I had half a dozen shots.

Then we had lunch: prawns, potatoes, greens with garlic, fish balls with lemongrass, chicken with lemongrass. All simple and delectable; the cook (female, invisible, indoors) was an unheralded genius.

Posted by Wardsan 20:15 Archived in Vietnam