Chùa Hương Tich, the Perfume Pagoda, sits on Hương Son, Perfume Mountain, 70km southwest of Hanoi. The mountain, 381 metres high, is a limestone karst outcrop. It is perhaps so named because of all the incense burnt at the temples. It is the most important Buddhist site in Vietnam, and has been the subject of songs, poetry, books and paintings.

Every year between February and April the Chùa Hương festival takes place. Hundreds of thousands of people visit the pagoda from all over Vietnam. On busy days 40,000 people visit.

I had calculated that Thursday was, as far as I could tell, an odd day on the lunar calendar, so it ought to be less busy. I can't be sure, but I think it worked; other photos that I have seen have far more boats on the river and larger crowds at the temples. 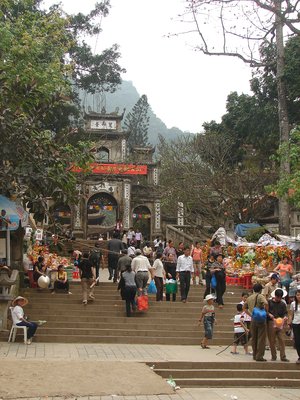 Actually it is a series of temples. A legend says that the Chùa Hương festival is to worship a princess who incarnated Avalokitasvara (a bodhisatva and disciple of Buddha) and attained Enlightenment there. The shrine in which she worshipped was discovered in the 15th century by three monks. In 1687 the Superior Bonze Tran Dao Vien Quang came to Hương Son and it was transformed into a major Buddhist sanctuary, starting with the Hương Tich temple.

I booked a tour through a travel agency and a minibus with about 12 of us plus a guide set off at 8am. It probably took a couple of hours. Among our group were two Vietnamese brothers, originally from Hanoi. One had brought along his wife, originally from Beijing, the other his son. They had left Hanoi about 50 years ago and gone south. They had left Vietnam in 1975 and settled in Orlando, Florida. The son, born in the USA, spoke reasonable Vietnamese. He was slightly taller than me and much bigger than his father. For his uncle, it was the first time back to Vietnam in 33 years. I love meeting people like this - their life stories are moving.

We stopped at the village of Mỹ Đức. There is a road from Mỹ Đức to the pagoda, but almost everyone travels the last stretch along the river Yen. There are hundreds, if not thousands of boats at Mỹ Đức. There is a boat for every visitor, or so it appears. 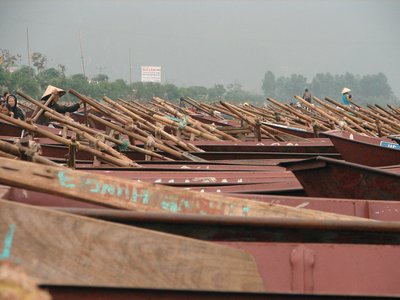 For a non-Buddhist, the water section was the highlight of the journey. The river flows through a dramatic karst landscape. Limestone crags jut unreally from a flat plain. 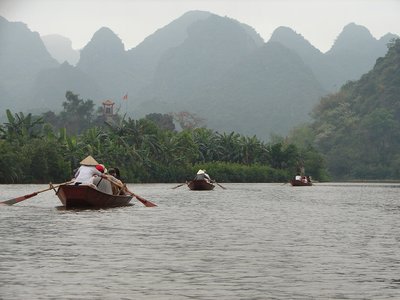 We all got into one large rowing boat. It was powered by one woman rowing at the stern, and two young people pushing/pulling an oar at the bow. 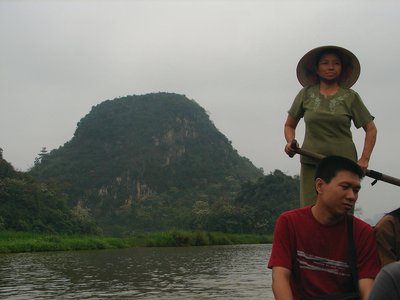 The method of propulsion is curious to someone brought up on western-style rowing. Unlike the western method, the rower faces forwards, usually standing up. The rower therefore has to push the oar away from her. For power, the western method relies on the strongest muscles in the body: the quads, buttocks and lower back. The front-to-front method relies largely on the triceps, which are puny in comparison. The only way to make it work is to lean forward, employing the weight of the body. This is no use if you are sitting down, when the stomach has to substitute. 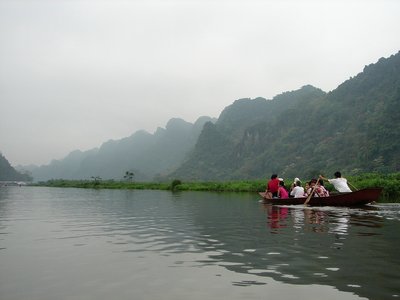 All the rowers also feathered the oar before they had finished their stroke. I couldn’t watch. But it was a perfect way to reach a temple.

The chap trying to get out of the picture is Brice, who is a French teacher in Ho Chi Minh City. 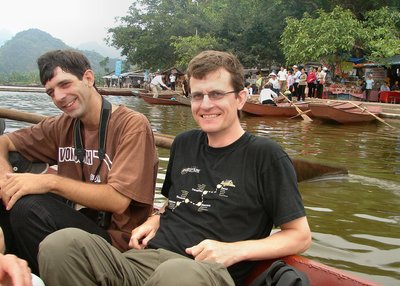 Although not too hot, it was humid, and rarely have I done anything so intelligent as take the gondola. Those who walked up were sopping by the time they reached the top. 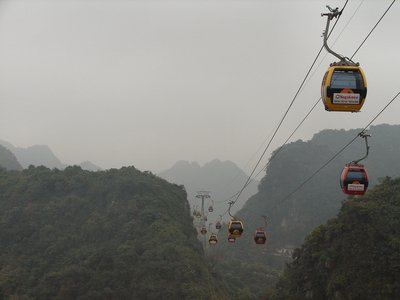 Near the top is Chùa Trong, the Inner Temple, aka Hương Tich cave. 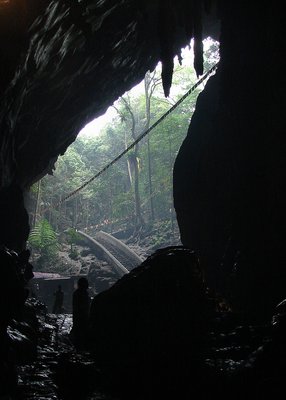 There has been a shrine there since 1575 at the latest. The cave is dotted with stalagmites and stalactites. Naturally, they have names, such as golden tree, silver tree, silver worm and basket. Nine stone drops are called the Nine Dragons (the Vietnamese see dragons everywhere). Nui Co - the maiden and Nui Cau - the youth – are supposed to look like heads. Women who want children often go to Hương Tich and pray at Nui Co and Nui Cau. 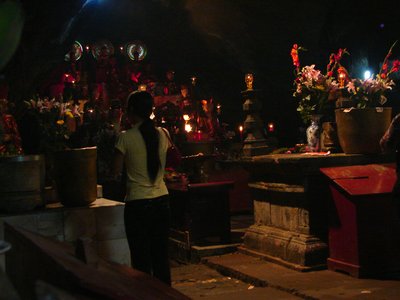 I didn’t know any of this at the time. I just saw a huge cave with lots of people praying at various rocks. A bit like some churches in southern Spain. As at all Buddhist temples, the worshippers made offerings: fruit, vegetables, biscuits, chocopies (mmm, chocopies), beer, golden lotus flowers, cigarettes.

Then I headed downhill. It became clear that the Perfume Pagoda is an idyllic spot ruined by unrestrained development. Between the entrance and the cave at the top, the path winds over slippery limestone for perhaps a couple of miles. This path is a one-dimensional shanty-town. 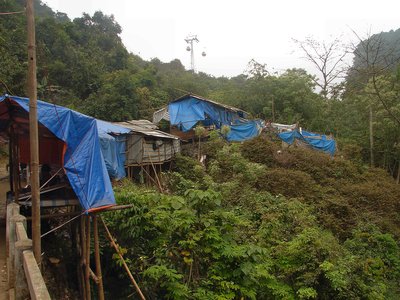 Shacks line its entire length, selling an identical range of crap. They either sell souvenirs, or a place to rest on the climb up or down, or the facilities of a WC (ve sinh). There are a lot of WCs. 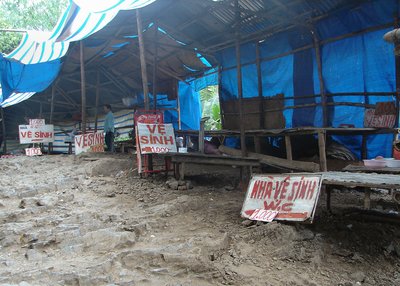 Each stall along this linear favela generates its share of rubbish, which is dumped over the side of the path. So there is a huge amount of rubbish on the way. 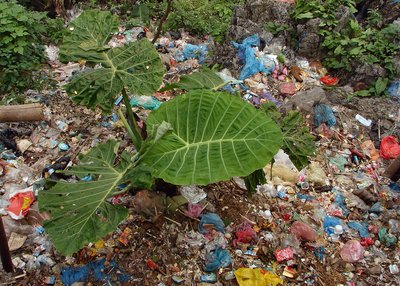 • Golden lotus flowers, some of which carry the face of the goddess of mercy;
• Name scrolls;
• Hats, cowboy and coolie;
• Sweets;
• Herbs and spices;
• Waistcoats for children, saying ‘souvenir of Chùa Hương’. 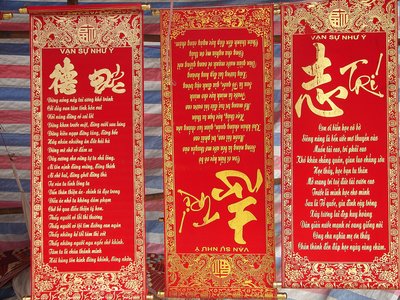 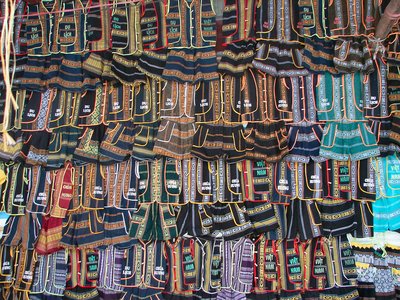 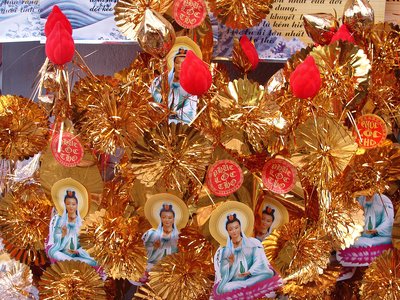 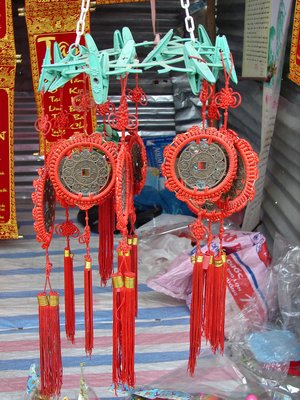 Many of the shacks play loud music. It’s ghastly. All rather like my memories of Blackpool.

The shacks are there, of course, because people buy from them (many are not there outside peak season, apparently). In this case, it is Vietnamese tourists, most of whom were wearing or holding Chùa Hương souvenirs. You would think that half way up they would have no chance, but such are the crowds on peak days that everybody gets business. 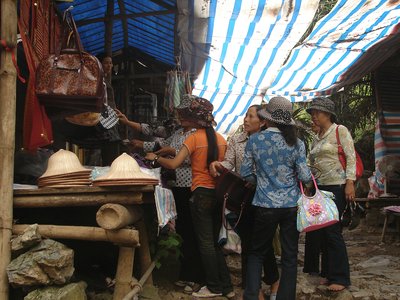 They are also there because the government, which owns the site, allows it. If it had any sense it would corral the commercial ventures into a single place, enforce dumping regulations and ensure that the holy places retain the atmosphere that they originally possessed.

There were some nice things to look at on the way, but they were partly accidental. These were flowers that had fallen from a rice tree next to the path. 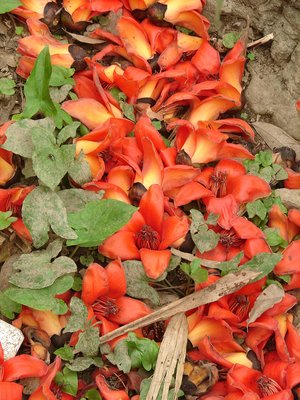 Having had lunch at the bottom, I headed to the lowest pagoda, Hương Tich, which you’re supposed to go to first. And, at last, I could see the point of the place. There were very few people around, and in one or two courtyards I had the place to myself. 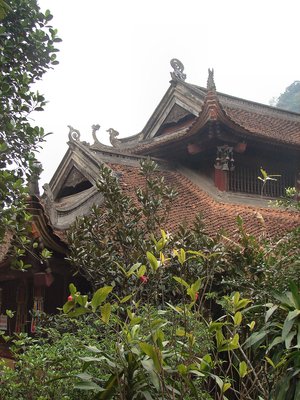 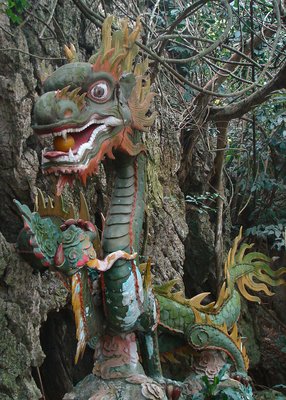 You could see that it wasn’t just a tourist attraction, but that monks actually lived there. In a courtyard was a lovely pond with painted turtles. 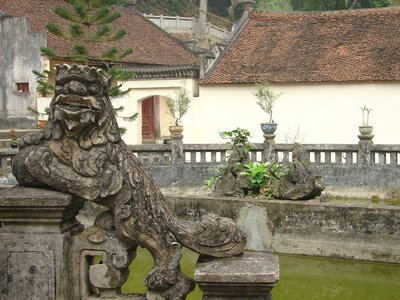 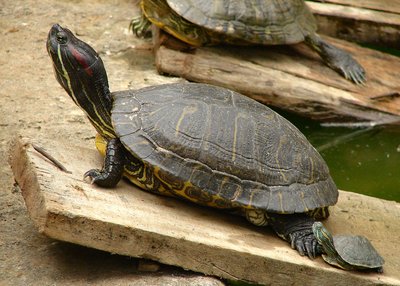 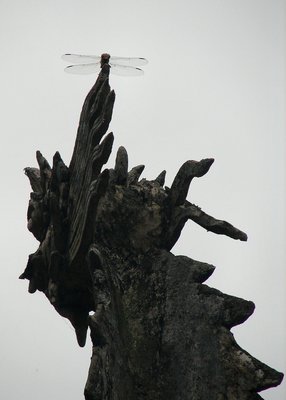 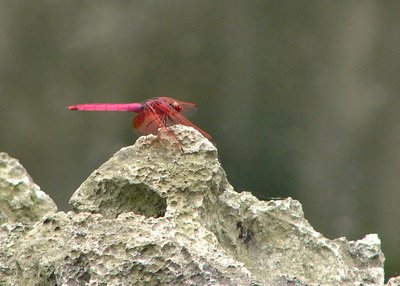 But unfortunately I had discovered the real deal too late to have a proper leisurely look.

The journey back was just as lovely, I think, although a lunchtime beer made me drowse. 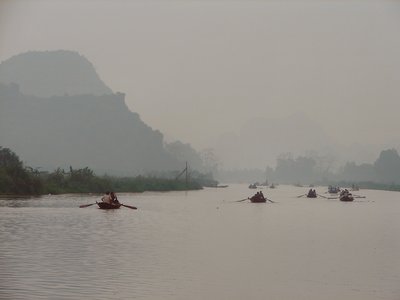 Posted by Wardsan 23:20 Archived in Vietnam

hi, I don't know as yet if vietnam is for me. I don't walk too much, or am very fit. I like festivals, happy people, and streets where you can sit and watch ones culture. Did you love vietnam? Any tips would be welcomed.

Fruitloop, I'm still in Vietnam, and I'm still not sure whether I like it. I walk most places but it's easy to get anywhere by taxi or by taxi-motorbike. For happy people I would recommend Laos; the Lao are the smiliest people I have ever seen.