Hurrah! My visa has arrived! Life is good again. I am free to leave. Only I can’t, now. I’ve been on a silkbuyfest this afternoon and have ordered some pyjamas to be delivered tomorrow morning.

However, I’m on the bus to Ninh Binh tomorrow evening.

You see signs outside some restaurants on the outskirts of Hanoi saying ‘thịt chó’. They are advertising that they serve dog meat.

It has not been on the menu in any restaurant I have visited. It is, in any case, inauspicious to eat dog in the first half of the lunar month, and it is now the 10th.

I did, however, stumble across a couple of dogs in the December 19th market. One was bisected transversely through the waist, the other coronally.

This is, I was told, a dog rose, which I photographed in Sardinia. 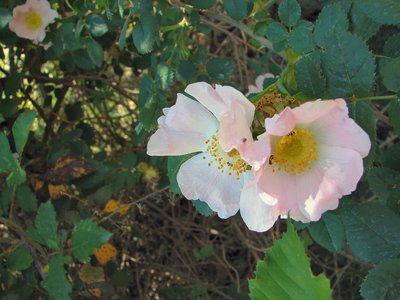 Rosa canina grows in Vietnam as well as in Europe. According to Bao Ninh in The Sorrow of War, some NLF soldiers discovered that if they dried the roots, cut them up and smoked them, they produced a narcotic effect. But as soon as the Commissars discovered that the soldiers were on drugs and noticed the reduction in motivation, they banned it. The book is a novel, but it was based on his own experiences, and I don’t suppose he made this up.

I’m perfectly willing here in VN to forego a main course because it costs £1 too much. You get used to different prices, and it is sensible to do so.

Yesterday I was walking around the West Lake and stopped to buy a bottle from a pavement vendor. I asked the price for a 500ml bottle, and the old lady paused and clearly made up the answer: “mười nghìn”, 10,000 dong. About 30p. I said “mười nghìn, my arse” and walked away, irritated, muttering. Who did she take me for?

Sure enough, around the corner I got a bottle for 3,000 dong.

Obviously, it’s only a few pence, but it is a pain to be quoted ludicrous prices all the time for something as basic (and homogeneous) as water.

Property prices are falling in London, hurrah. A lot of people have wanted to talk about property prices. They all quote prices per square metre. When asked about prices in London, I can’t answer: the only prices I have ever heard quoted per unit area are rents for commercial property, and my knowledge of these is years out of date.

Anyway, the information I have been given is that property prices in Hanoi are comparable to those in London. Rents are cheaper. Earnings are far lower. Something does not add up. If rents aren’t covering the cost of capital it’s because people are buying with the expectation of capital gains. That’s one classic definition of a bubble (Bagehot’s?).

Posted by Wardsan 18:43 Archived in Vietnam