The CDs look legit - they even have anti-piracy badges - but there are some curious mis-spellings. Piano, for example.

Vietnam, the 150th member of the World Trade Organisation, is required to enact laws that protect intellectual property. If it has any, it doesn’t seem to enforce them. Vietnam is pretty much the world capital of counterfeiting (this is a factoid I think I got from The Economist a couple of years back). If you want to pay royalties here by buying legitimate goods, forget it. Gresham’s Law: bad money drives out good. The same with consumer goods.

Even my copy of The Economist turns out to be photocopied. The wonder of it is than any countries do actually protect intellectual property.

At least one of the CDs won’t play, but I’m not keen to take it back. The guy who sold it to me, while very polite, had a preposterously long nail on his little finger, which made him look like a Chinese gangster.

Last night I went to a concert at the Hanoi Opera House. The Opera House itself – built in 1901-11 - is constructed in classical style, with boxes and a circle, but in miniature. Indeed, it is said to reproduce the Palais Garnier in Paris. It is a lovely venue, actually. 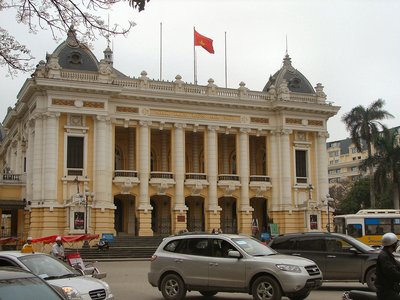 It was the Vietnam National Symphony Orchestra playing Ravel, Messiaen and Svendsen, conducted by Pierre-André Valade. Ravel’s Le Tombeau de Couperin did not grab me, even though I have it recorded somewhere. To my surprise, the Messiaen Le Tombeau Resplendissement was a lot of fun (I like Messiaen when he is loud and bashy, less so when quiet and introspective), and the finale spellbinding. I’m going to buy it. After the interval, The Waist by Vietnamese composer Trần Kim Ngọc was also, as far as I could tell, excellent and certainly interesting, but my concentration was shot.

The audience was slightly smaller than most at the Wigmore Hall. About a quarter looked European, in a broad sense. Blessedly, not a single mobile phone rang during the concert. I have had one concert in London ruined by the person next to me snoring all the way through; that didn’t happen either.

But a lot of people strolled in after the first piece had started. Much worse, quite a few people seemed to think it was acceptable to talk during the playing, as if the orchestra was their personal band playing divertimenti for them. To my left, some people held a long conversation at normal speaking volume during the piece by Kim Ngọc. Even during the quiet parts, they neither paused nor whispered, but just carried straight on with their property deal, or whatever it was that was more important.

Not to mention the overenthusiastic applause. Not just between movements, but even within them.

Posted by Wardsan 22:42 Archived in Vietnam