I took a sleeper back to Hanoi the night before last. In the same compartment were two people who had escaped from Cambodia in 1975, when the Khmer Rouge came to power. Only they had gone to southern Vietnam, which was not a region popular with the northern government after reunification in 1975. In 1980 they again fled as refugees - Vietnamese boat people - taking a boat to Thailand over three days and nights. They spent three years in a refugee camp. That’s a lot of bad luck.

But it ended at that point. They left the camp to go to Australia. He sells Asian-language CDs in Melbourne. I got the impression that there is a large enough Asian community in Melbourne that they don’t have to speak English too much, except to their son, who does not speak Vietnamese. This was their first trip back to Vietnam in 28 years.

Anyway, yesterday I saw that in the last year global rice prices have risen by 70%, and by 20% this year. The rise in price is not just due to increased demand as people get richer and eat more; indeed the Chinese are switching out of rice and into meat.

Whatever the reasons, this is an important event. Rice is traditionally the staple of most of India, of southeast Asia and of China up to at least the Yangtze. Rice has supported greater population densities than all other staples (with the possible exception of wheat – I can’t be bothered to check these off-the-top-of-the-head factoids because this is a blog, after all), which is largely why Asia has three-fifths of the world’s population. Indeed, rice supports three-fifths of the planet. 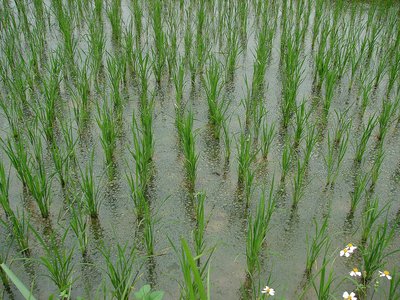 In Thailand, Laos and Vietnam, saying ‘eat rice’ means more than just ‘eat rice’. In Thailand it just means ‘eat’ (kin khao). Asking ‘have you eaten rice today?’ is a way of saying ‘how are you?’. In Vietnamese it is polite to say ‘please eat rice’ (mơi ăn cơm) before every meal – even if the meal is noodles.

You can even get rice-flavoured ice-cream here. It's not bad. 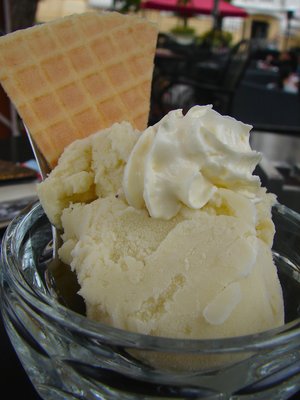 Vietnam is usually counted the second-largest rice exporter in the world (4.5m tonnes) behind Thailand (9.5m tonnes); India may have overtaken Vietnam last year, however. Thailand produces over twice as much rice as it consumes, and Vietnam nearly twice as much. So the rise in the price of rice improves their terms of trade, making imports cheaper relative to exports, and increases real per capita income.

Vietnam and China, and now India, have restricted exports in order to ensure domestic supplies. Since rice is storable, such price rises can also encourage speculative hoarding on the part of producers, leading to further price rises.

The increase in price will also transfer wealth from rice producers to rice consumers within Vietnam, that is, from urban to rural areas. Since 57% of the VN population work in agriculture, producing only 20% of GDP (both numbers falling), so the first-round effect could be geographically similar to that of a redistributive tax policy. (A second-round effect will be to encourage an increase in rice cultivation, if there is any land left uncultivated, or a switch out of less remunerative agricultural products. This will not happen immediately: rice production is forecast to rise by only 1.8% in 2008, and VN rice production is not forecast to increase at all (probably because of the pace of un=rbanisation). For the full glorious statistics on food production from the UN FAO, see this. International trade in rice is in any case forecast to fall because of the export restrictions.)

The price rise will significantly reduce real wages in rice-importing countries, especially in Bangladesh and Burma, both of which are terribly poor to begin with. Since it is a staple, consumers cannot easily substitute into other foods, and in any case food prices have been rising in general (wheat has more than doubled in the last year, for example, leading to a ‘pasta strike’ in Italy last year). North Korea would also be hit if China decides to change the price of its subsidised rice exports. The Philippines and Indonesia are the largest importers but, being less poor, they ought to have a more diversified food consumption pattern to begin with.

That’s enough cod economics. Any more would require research, and that’s out of the question.

Posted by Wardsan 18:40 Archived in Vietnam