Not the Coronation Street kind

The H’mông arrived in waves between 1700 and 1900, pushed out of China by the Han. They were, and are, wet rice farmers cultivating flooded paddy fields. Their land in Vietnam is far from flat, so they had to construct terraces. They have terraced the entire landscape around here. The valley beneath Sapa is like a living contour map. It is an impressive achievement. 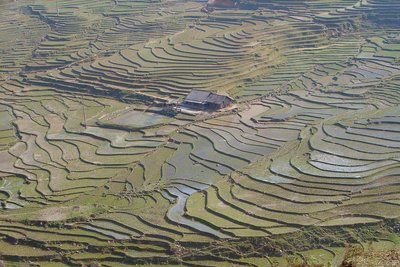 It’s tempting to take a lot of photographs of this orthogonal world. I took these photos during two walks with Matt, the first to Càt Càt, the second from Cầu Mây to Tả Van (I hope all the diacritical marks are appreciated).

Càt Càt, a H’mông village, is 3km below Sapa. A couple of H’mông girls walked along with us, one each, trying to sell us bracelets and mouth harps. They gave up after a mile or so. At Càt Càt we walked down a steep path to a bridge where we found the remains of a French hydroelectric power project, and a non-functioning waterwheel (it’s dry season). Then we climbed up beside a waterfall and looped back around. We saw: children, pigs, dogs, chickens, water buffalo, terraces. 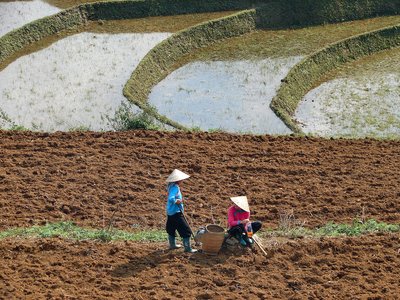 The walk was just long enough for us to discover the inadequacy of the 1:75000 tourist map. 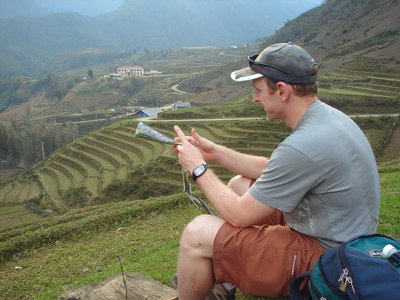 Undaunted and unintelligent, we planned to walk 17km up the valley back to Sapa the following day using just the map.

It didn’t work, of course. We took a motorcycle taxi each down the valley to Cầu Mây easily enough. I hadn’t been on a motorbike since I was about seven and didn’t enjoy the ride much, although the views over the digitised valley were lovely. The sensory package was not helped by the stinking helmet.

At Cầu Mây the river is crossed by an old rattan bridge and newer steel suspension bridge. The rattan bridge would not have been worth travelling to see, had it been the sole objective. As we left the main road to descend to Cầu Mây, we were again picked up by two H’mông girls. Mine was called Chu and was nine years old. 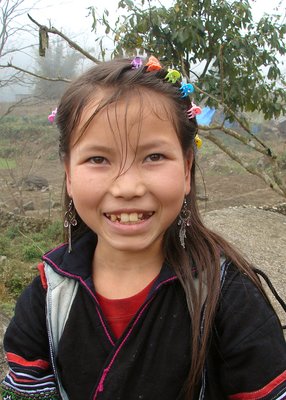 The other girl was extremely shy and we never found out her name. Chu was unshy; indeed, she would not shut up. Unfortunately, the conversation was limited.

The children around here are equally proficient in English and French. It is easy for them to learn, of course. Some of them are quite good.

In between (although usually before) the incessant “You buy from me?” requests, there are also genuine questions: “What your name?”; “Where you from?”; “How old are you?”; “You got wife?”. Always with a smile. These are probably both preludes to a sale – establish contact, then try to close – and genuine questions. Everyone in SE Asia asks the same questions (also, sometimes, “How much you earn?”). There are a couple of H’mông girl-women around town who always say hello: Xo and Dzao (no idea about spelling). 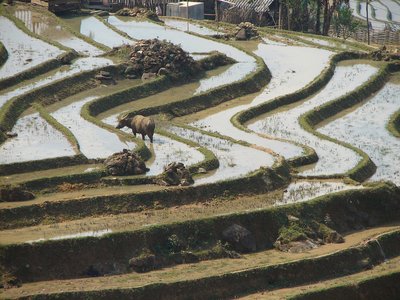 Chu and her friends gave up shortly after we crossed the river. We headed left for half a mile to Giàng Tả Chải (pronunciation: no idea). It is supposed to be a Dao village. But when we got there, it seemed to be deserted. There turned out to be one old lady sitting in the sun, who offered to sell us stuff when we approached. Everyone else was at Sapa.

Then we retraced our steps and walked up a very slippery and difficult clay path beside a waterfall. The idea was to walk along a path next to the river to Tả Van, about 3 km away. But we must have missed that path because we just ended climbing up and up, and up, on a very slippery path. It was hard work, and felt like this: 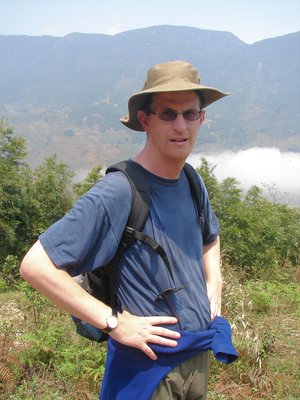 Even when we thought we had eventually reached the top, we hadn’t. 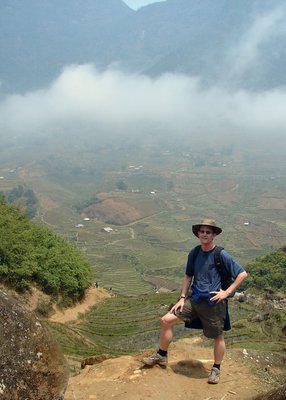 Eventually, we faced a choice: carry on up, possibly even up to Fansipan, or down a path to a couple of farmhouses. 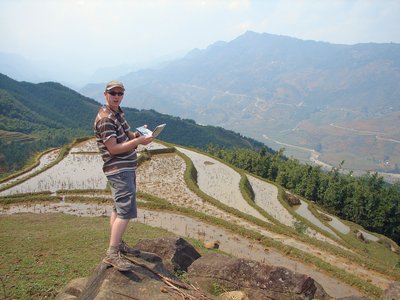 We plumped for down. After scrambling down between paddy terraces we reached a couple of huts. We asked for directions for Sapa and the lady pointed up. Then she pointed down. Hmmm. We tried to carry on down, but our way was blocked by some territorial dogs (even a scratch here and it would be back to Hanoi for some rabies injections). So we picked our way around an amphitheatre of terraces on a path next to a wall. When that petered out we resorted to walking along and up the paddy walls themselves, not designed to take people of my mass. 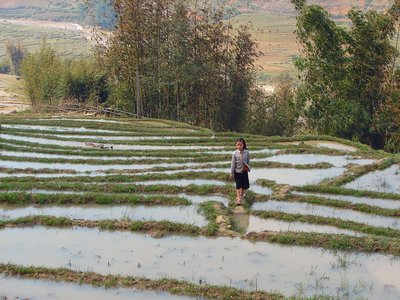 We had lunch at a local maximum next to a bamboo grove and then faced the fact that we had made the wrong choice, so we headed straight up another 200m or so, and finally reached a wide track, which wound down over a couple of miles or so to Tả Van. 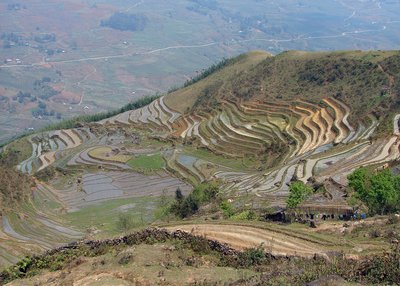 Tả Van is supposed to be a Dáy village, but it was difficult to tell. Tả Van was nothing special; everyone was selling tat. There was a substantial school and some other civic buildings, so the village is doing well. 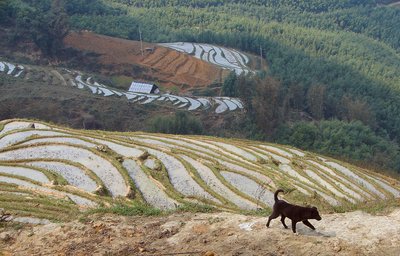 At this point Matt estimated we had climbed 800m or so, on very difficult terrain. We were tired and mistrustful of the fictions on our map, so we called it a day and took motorbikes back to town.

All this, of course, is just a transparent excuse to insert some pictures of terraces. 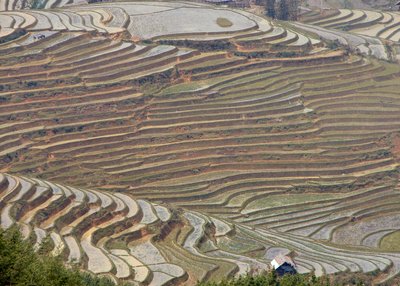 Posted by Wardsan 21:15 Archived in Vietnam