I’m on my own. Matt headed off to Ha Long Bay the day before yesterday. He had a chest infection and didn’t feel up to climbing Fansipan.

I was temporarily bereft: I hadn’t had to think for myself for two and a half weeks. I avoided the need for autonomous action by staying in Sapa. The decision was made even easier by the fact that I have eaten very well here. I found a hotel that costs $10 a night. The room is up under the roof, and I like it. It is at least 100m above town, so even walking to and from the hotel works the legs. The hotel has a little garden with a swing bench overlooking the Sapa valley; this is where I hope to reduce my book surplus.

Unfortunately, a wet fog has rolled in today, so the swing bench has no view, and the temperature has dropped. 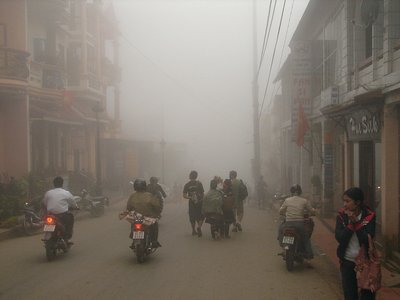 There is nothing to do but read, blog and eat.

Or try to learn Vietnamese. I thought Thai was difficult, because it’s a tonal language, but Vietnamese seems much harder. I have got nowhere. Vietnamese has six tones compared to five in Thai. Unlike Thai, many of the vowels and consonants are extremely difficult to pronounce. I was talking to two Vietnamese yesterday at dinner called Vượng and Nguyêt); hard as I tried, I couldn’t get near to pronouncing Vượng’s name correctly.

Then there is the spelling. Vietnam was under the control of China for a thousand years until 939 AD. Two-thirds of its words derive from Chinese. Vietnamese was written in Han Chinese or in an adapted Chinese script called chư nôm. In 1910 the French imposed roman script using a system called quôc ngư. This system was invented in the seventeenth century by Alexandre de Rhodes, a French Jesuit missionary. Unfortunately, he must have invented it one Friday evening after he’d been at the Benedictine, because the letters bear little relation to the sounds.

Then there are regional differences… That’s why I’m blogging today.

Dong means copper. In the north, the dong replaced the French Indochinese piastre at par in 1964. It was revalued in 1985, and Vietnam suffered high inflation immediately afterwards, lasting well into the 1990s.

I’ve been here before: Peru in the late 1980s and Russia in the early 1990s. But the zeros are still mind-boggling. The Vietnamese ignore the last three digits when quoting prices.

I got the story of Sapa wrong the other day. When China invaded in 1979, the fabric of Sapa was not affected. The Viet had to get out of town for a month or so. That’s it.

The American war was different. The Americans flattened every building in Sapa.

I'm not cut out to be an historian. I now understand it was the French who flattened the town. In 1898 the first French missionaries arrived in Lau Cai, 30km down the road. In the same year Paul Doumer, the Governor General of French Indochina, asked his people to find a place to be used as a convalescence station for French soldiers. Lots of French troops were stationed in Lao Cai, as it was a strategically important border town. In 1903 a military station was established up the road in Sapa. In 1912 the Lao Cai-Sapa road was built, which kick started tourism. The first hotel was built the same year.

Fast forward to 1950, when the Viet Minh captured Sapa. The French destroyed all the villas before leaving. And in 1952 they sent bombers from Diên Biên to bomb the town.

Source: Sa Pa in the Midst of Clouds, by Pham Hoàng Hải.

In my nul points review of the border town of Lak Sao I forgot to mention our school visit. After wandering through a market, and after a seven-hour minibus journey I was knackered and hardly up for it, but it turned out to be quite fun. There were a couple of schoolrooms next to a sign saying Anglo-Vietnamese Club, or some such.

Rae and I went into one room and Izzy, Marla and Matt into the other. Rae and I introduced ourselves and wrote on the board: name, country. Children of all ages. I got blanks looks when I said angkit (England) so I drew a map. Both the British Isles and Laos looked to me like phalluses, so I moved on quickly.

Then we split up and I ended up talking to four people, of whom one, a 12-year-old girl, was by far the most talkative. Her little sister talked quite a lot too, the older ones behind very little. They had been learning for five months and had almost no oral comprehension. I tried to concentrate on pronunciation: Laos learn English from other Laos, and the pronunciation of Englao bears no relation to my mother tongue.

Then we were asked to sing a song. My mind went completely blank, so I just sang a little bit of Jingle Bells and then the national anthem, operatically, fortissimo, together with made-up gestures. An improvement on the real thing.

Then I asked them to sign the Lao national anthem. Mistake. It went on for minutes with no discernible tune. Every child knew it by heart; they sing it at school every Monday. We don’t even know the second verse of God Save the Queen.

On the muzak here at Baguette & Chocolat is “Oh my love" by Westlife. I couldn’t say whether it is the original, if it was an original; most tracks out here are covers. The only reason I recognise it is because we were treated to a solo rendition by one of our guides in Laos, Thuy. He also sang the Celine Dion song from Titanic. He had an acceptable voice but no taste in music.

This is not unusual: western music is played in a lot of cafes around SE Asia. It is almost invariably the most infantile, saccharine, emetic stuff. There is, for example, a song by Bryan Adams that gets played everywhere...

[Thuy means 'chubby', and he was. Thais and Laos all have nicknames. The spirits can’t get you if they don’t know your name, or something. I met quite a few people called Gung (prawn).]

Not only is Fansipan the highest peak in Indochina, at 3143m or so, it is the easternmost peak of the Himalayas. I don’t think I’m going to get to climb it.

Posted by Wardsan 20:56 Archived in Vietnam