A walk and a swim

I'm recording events of ten days ago. The lag is partly down to the difficulty of finding a connection good enough to upload photos, and partly because writing about stuff has to come second to actually doing stuff.

Four of us went for a walk with Chan, the tour guide. We headed out of Luang Prabang in a tuk-tuk. These little vehicles have wheels the size of dinner plates and engines calibrated at 2 mosquito power, and are not suited to country roads. We duly got bogged down trying to ford a stream. Matt and I got out and pushed, uselessly. Ed got out and said ‘we shouldn’t have come this way’. Rae was not allowed to get out, delicate flower. It took a construction vehicle to haul us out. 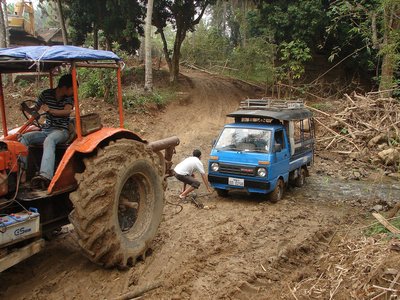 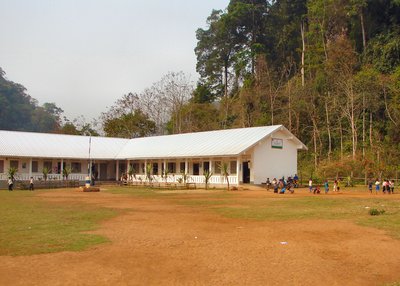 Chan said that the children were Kamu (Kamu are part of the Mon-Khmer linguistic family). Those of us who used the school’s facilities were charged an unexpected 1,000 Kip fee after the happy event. The chap in red has the collection box: 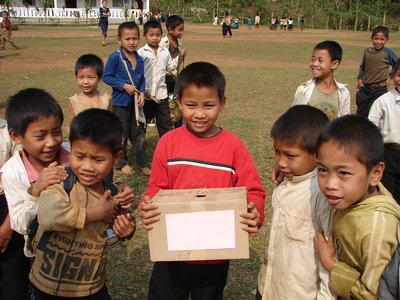 Then we walked through the adjacent Hmong village. 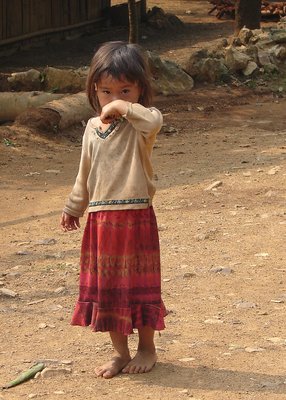 After that, a teak plantation. 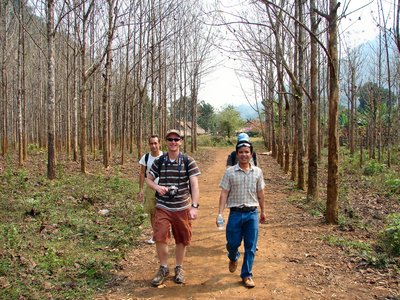 Then a walk across a charred landscape, under an oppressive sun. 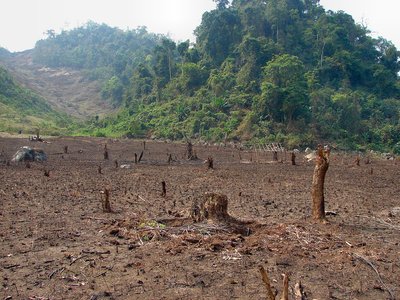 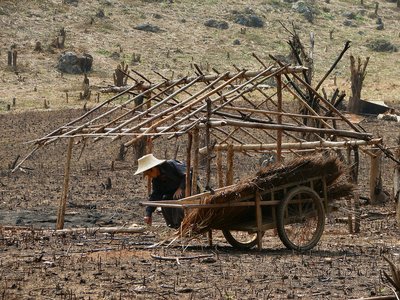 Finally, we climb up through bamboo forest for a couple of hours. 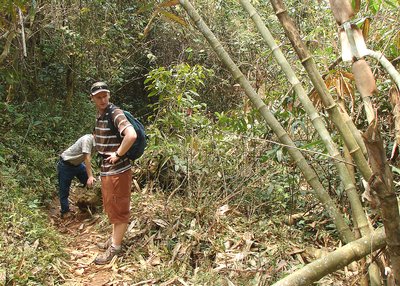 We only covered about 12 km (7.2 miles) but I found it very hard work because of the heat. It seemed to affect me more than the others. I was tired for two days afterwards, but that may also have been due to the, er, gastrointestinal laxity that dogged me throughout Laos.

Near lunchtime we made it to our destination, the waterfalls at Tat Kuang Si. Sam and Voo had come directly in a tuk tuk. To me a waterfall is just a waterfall, but this one had a couple of lovely pools at the bottom. 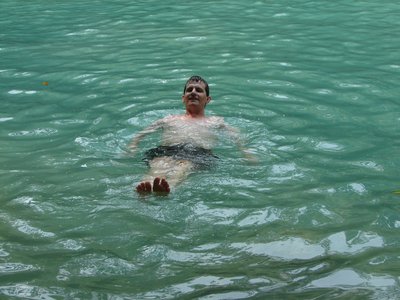 They were very blue; copper sulphate, we decided on no evidence at all. 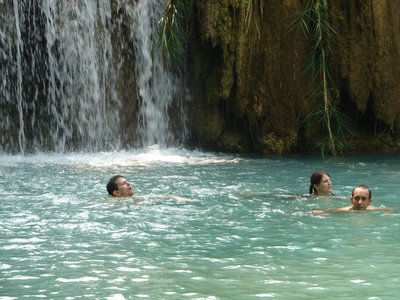 After a swim we walked past the Tat Kuang Si bear rescue centre, run by an Australian charity called Free the Bears. A Brit called Jude told us about the centre. The bears at the sanctuary are Asiatic black bears. The Asiatic black bear, Selenarctos thibetanus, ranges from Iran to SE Asia and northern Siberia. Despite its adaptability (it is omnivorous) it now exists only in disconnected pockets, so it is a CITES Class I endangered species. It is endangered because it is believed in Chinese traditional medicine that bile from the gall bladder is an aphrodisiac. (An obsession with miracle erections is also behind the decline in the Bengal tiger – why can’t Chinese softcocks just take Viagra, which works?) 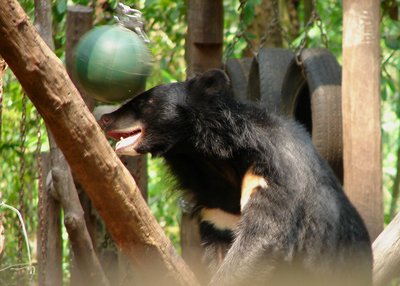 Bears are caught in Laos when very young and smuggled alive across the border. There they are kept in tiny cages that do not allow them to move at all, and the bile is milked by way of a permanent catheter. The bears at the rescue centre were all confiscated by the Lao government. It seems that a minister in the Luang Prabang area is strongly against the trade; without his support, the rescue centre could not exist. 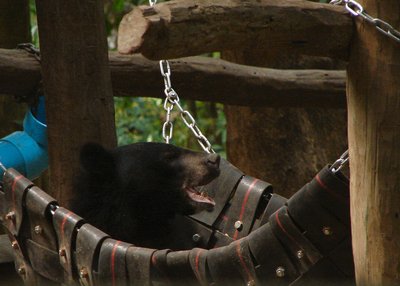 The bears at the sanctuary have a large space to run around in, tyres to play with, frames to climb and hammocks to lounge in. They are fun to watch. Before they are fed, they are led indoors and the centre workers hide their feed around the enclosure. The bears then have to find their feed for themselves, which encourages them to use their sense of smell and reduces squabbles between them. In the wild they are solitary but they get along fine at the centre apparently. 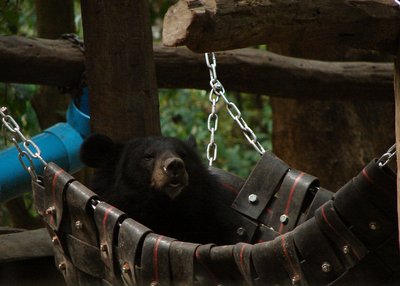 They are a lot smaller than brown or black bears, but their claws still appear capable of effortless evisceration.

They have nearly finished building a larger enclosure. When it is open the adults will move into it and the juveniles into the present enclosure. They are currently short of space for the juveniles. 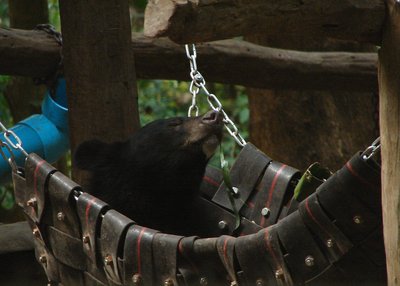 I don’t normally give to animal charities, because I think that the British give too much to animals and to cancer research and too little to everything else, particularly children’s charities and overseas poverty relief. But I bought a T-shirt anyway. 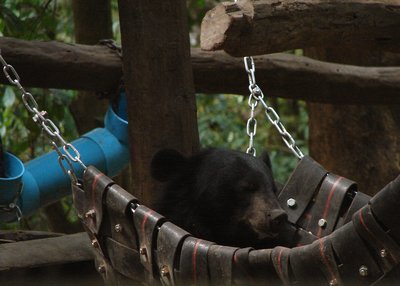 Posted by Wardsan 18:42 Archived in Laos