On the Lao side of the river our guide, Chan, introduces himself. He is wearing shades and talking into a snazzy cameraphone. My first impression is of a wide boy. My first impression is mistaken: Chan turns out to be a nice guy and a devout Buddhist. Like one of our other Lao guides later on, he studied in a monastery, where he learnt a form of English. I was not expecting our guide in a communist country to be religious, but the government abandoned its atheism very quickly after 1975, since the people ignored the policy anyway. 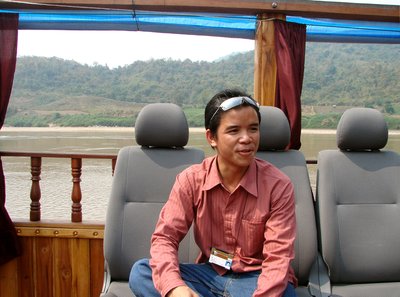 Shortly afterwards, we board the boat where we are to spend two days travelling down the Mekong. The boat is about 100 feet long and ten feet wide, built square forward and aft, and powered by a large engine. She is owned by a family who have saved the money by running a smaller boat. They live in a small cabin aft. They have hired a pilot, a necessity on the Mekong where the stream wanders all over the place and there are submerged rocks. 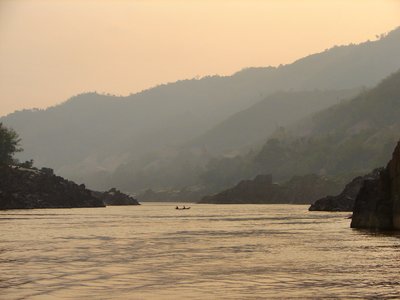 Just in front of the family’s cabin is the head, and in front of that bulkhead some shelves with drinks and crisps and an eskie (as the Aussies put it) with more drinks. Then a dining table and then an empty space with cushions. 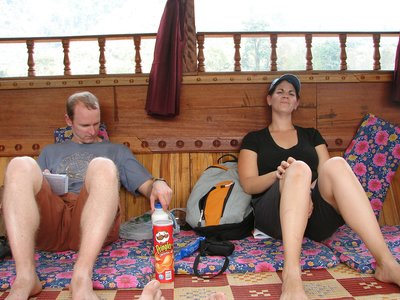 Voo, Matt and Sam on the boat 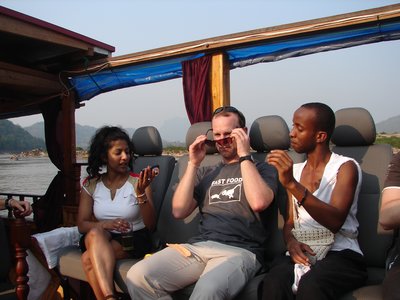 Come to think of it, half the boat seems to be cobbled together from car parts. The boat’s horn – which is hooted before going round the many blind bends – is a car horn, which seems ludicrously descant. The larger the vessel, the deeper its voice should be, surely.

Soon after setting off we stop at a checkpoint. Children carrying trays of crisps, sweets and fags instantly swarm aboard and offer their identical wares at huge prices. Rae obliges; she is a soft touch and they know it. Strangely, however, they also pick on Izzy, the group's hard bargainer. 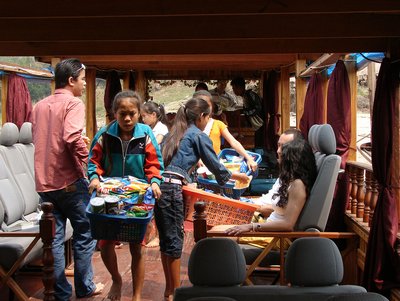 And then we are off on a long stretch. The four antipodeans settle into card games; the Brits (excluding me) bask like lizards in the sun. I spend most of my time walking around the boat and looking at the scenery. With a lot of time in front of us, everyone relaxes deeply.

Over 1500 miles from its source in Tibet, the mother of rivers (mae-khong) is about as wide as the Thames at Greenwich. Farther south in Laos it is twice as wide. It’s a big river: the twelfth longest in the world, and the tenth largest by volume. 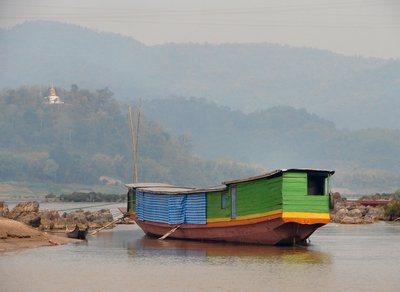 Beige with silt, the river flows slowly between heavily rainforested hills. They stretch into the blue distance but haze limits the visibility. Many of the trees are teak. Sandy beaches make up large stretches of the river bank. Some dunes are cultivated with peanuts.

Water buffalo by the Mekong 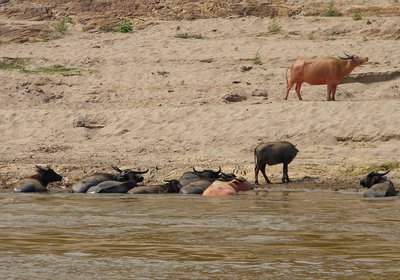 The rest of the river bank consists of a highly stratified mudstone or shale, which has twisted over the aeons so that the strata are near-vertical.

Speedboat on the Mekong 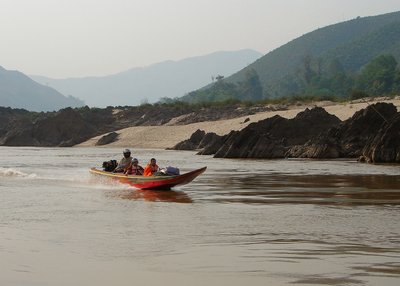 In the afternoon we stop at a Hmong village. As we draw up to the river bank all the village children – most of the population – run down the sandbanks to look at the boat and the huge foreigners in it. 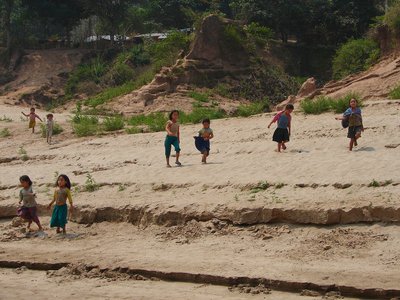 Only half the population of Laos is Lao Loong (lowland Lao, speaking a language closely related to Thai). In Laos, the Hmong have always been thought of an upland people. But that is because when they arrived from China (and perhaps, originally, from Mongolia) in the 19th century the only land free for them was in the hills. Many of the Hmong have moved into the valleys. In the valleys they have access to schools and hospitals, particularly for childbirth. However, the schools need to be pay for, and many Lao children do not go to school. The flipside is that they have to pay taxes for the first time in their history. Alternatively, they can stay in the hills, where it is harder for the government to collect taxes.

Chan tells us about the Hmong. The Hmong worship their ancestors, and each house has an altar inside it. Every house also has a second door for the dead.

The Lao government is, finally, trying to govern the country on behalf of all its people, rather than just the Lao. Indeed, ethnic diversity is part of the attraction to many tourists, and there is a good Museum of Ethnology in Luang Prabang. But the government had it in for the Hmong for a long time. Unlike most peasants in the east, the Hmong did not join the Pathet Lao, the Lao Communist movement. Instead they fought the PL and the Viet Minh during the secret war. They were funded by the CIA and provisioned by Air America. They were led by Vang Pao, a Hmong who had made it to major-general in the Royal Lao army. Eventually, of course, the PL and the Vietnamese took over larger and larger swathes of the country, but Vang Pao was never defeated and eventually fled to Bangkok. (This according to A Short History of Laos). In the official version, of course, he is “a puppet of the US imperialists” who was “responsible for the deaths of many Lao”. (The PL were founded and funded by the Vietnamese and they killed a lot of people too. The one thing they didn’t do was use Agent Orange and napalm, and perhaps only because they didn’t have any. But that’s a subject for another time.)

Once the PL gained sole control in 1975 they took revenge on the Hmong. Many Hmong ended up in the USA, where as a group they have achieved better economic outcomes, on average, than their Lao compatriots. Indeed, some of the richer Hmong villages prosper on the back of remissions from exiles. Vang Pao became a leader of the Hmong community in the USA, and last June he was charged with eight others in a Minnesota court with conspiring to overthrow the Lao government. A strange decision to prosecute, one might think.

We go into one of the thatched houses. It takes a while for the eyes to adjust to the darkness; there are no windows. A battery radio is blaring at maximum volume. Inside the large single room are about ten Hmong people. The mother of the family has five sons and a daughter. The eldest son is there too. Chan explains that he is 28 and has two children. I can’t believe it – the guy looks no older than 14 – so I rather rudely ask him again. The mother says she is 38, but she looks older. She speaks Lao, so she has been to school.

Now comes the part that leaves a somewhat bitter taste. The people here are poor even by Lao standards, while we are as rich as robber oligarchs. It is appropriate for wealth to be transferred. We all know that simply giving money or objects to people for nothing is to encourage a form of begging which will degrade the recipients and even deprive them of a means of making a living. But what we do is not a great deal better. We buy lurid fluorescent wrist bands, which we do not want, from the adult women. It is a shame. The Hmong, like all the peoples of Laos, weave beautiful textiles. Their most beautiful clothes are not for everyday wear: they take too long to make and are too precious. Perhaps they could make and sell these for proper money - as they do in Sapa - instead of making junk. I’m not sure what to think. 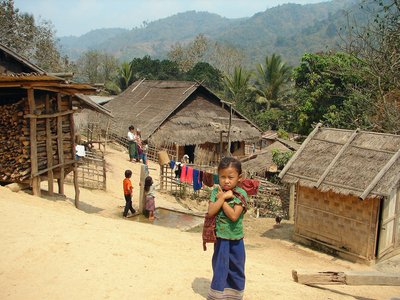 We wander round the village. Pigs, chickens and children are everywhere. In Laos, that is true of everywhere but the town centres. A little girl follows us everywhere but she is too shy to interact. 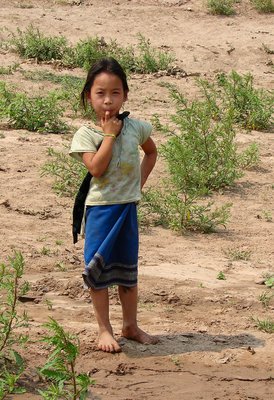 We re-embark and get to Pak Beng as the sun sets. Pak means mouth; this is where the Beng meets the Mekong. As elsewhere in Laos, most of the houses are on stilts. 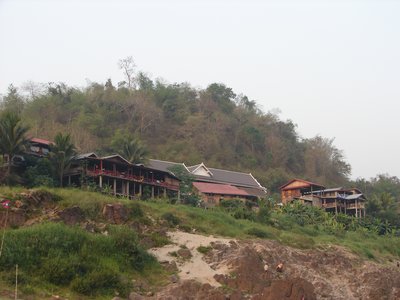 Our stay begins unhappily. Rather than carrying the bags ourselves, we are encouraged to hand them to fairly small boys to carry. My rucksack is not far short of 20kg and is tall; it is much easier for me than for the boys to carry it. Instead, I hand it over to a boy and pay him a dollar to carry it a short distance uphill. Rae, again, is unhappy about it, but she is more worried about their physical capacity to carry the bags. These children are not going to school; they are earning very good money for their families instead. But it might be better for them in the long run if their parents carried the bags and the kids went to school.

At Pak Beng, the generators run for four hours a day, in the evening. Apparently they have hydroelectric power, but we are in the dry season and the power is off. I take a cold shower in the darkness before the power comes on – a great relief after the heat. We eat in one of the many local restaurants – all the tourists going down the Mekong stop here for the night - and have our first degustation of lao lao. Said to be ‘whisky’, it is actually a home-made moonshine made of rice, consumed immediately after being made. It tastes of cheap grappa. Nowhere in Laos are we charged for lao lao, but it is doubtful value for money even at a price of zero.

As we walk back to the guesthouse a storm hits. From nowhere the wind gets up and huge drops fall. Even as the rain falls, the wind coats our hair, clothes and mouths with dust. It is strange.

Without air conditioning or a fan, the night is hot. Rubber sheets on the mattresses do not help.

The following day I am up at dawn to walk around town, but forget my glasses in my befuddlement so I just get late-Matisse impressions. All the Lao in town are up and about. The market is in full swing. Mist sticks to the hills and lingers until the middle of the morning. 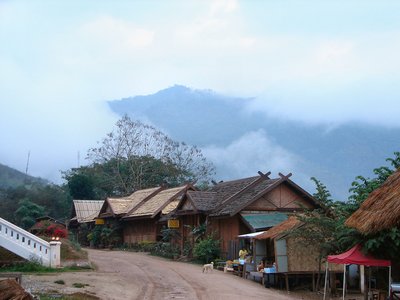 We chug down the Mekong all day, stopping only at the caves at Pak Ou, aka the Caves of the Thousand Buddhas or something. The caves were a place of worship centuries ago, when the population was animist (as indeed in some ways they still are – every building in Thailand and Laos has its shrine to house the local spirits). Fa Ngum stayed here on his way to taking Luang Prabang in the fourteenth century, I think. He forcibly converted the population to Buddhism, so there have been Buddhas here ever since. For many years, at Lao new year, the king would wash the Pha Bang (the Buddha that gave Luang Prabang its name) with water from the caves. Now they use water from Luang Prabang; and the royal family is gone, most of its members dying during their ‘re-education’ in the north. So the caves have some historical importance, but they aren’t that impressive, truth be told.

It is the river that is the star. 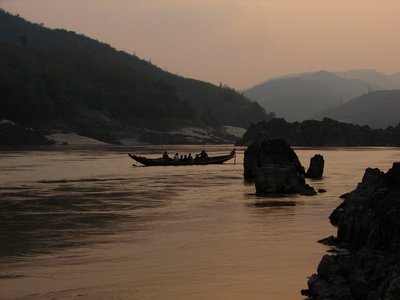 Leaving the boat at Luang Prabang 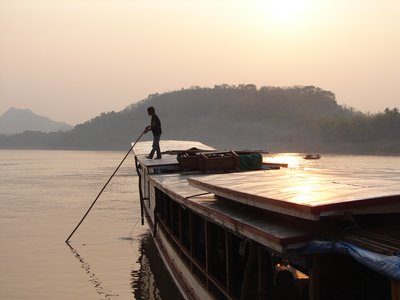 Posted by Wardsan 02:04 Archived in Laos