The second of the UNESCO World Heritage sites near Yogyakarta is Prambanan. Borobudur is Buddhist, Prambanan Hindu, but they were built at similar times. That’s the story of Java, and of so many of the old religions of southeast Asia: syncretic Buddhism-Hinduism, religions coexisting and influencing each other.

We were shown around by a guide, who had published a book on Prambanan. Because I asked questions and looked interested, he accompanied me around the entire site and sold me his book, which I no longer have. From what I gathered, Prambanan was built around 850 AD during the Shaivite or Sanjaya kingdom, which was a Hindu kingdom in competition with the Buddhist Sailendra kingdom, which lasted from the seventh to the eleventh centuries. King Sayanendra’s (Sailendra’s) granddaughter – Buddhist – married his grandson – Hindu – and tensions between the two kingdoms fell. She built a Buddhist complex and he built a Hindu one nearby; his father built Borobudur. 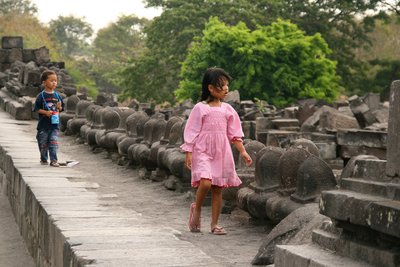 In 928 the kingdom moved to East Java because of a huge eruption of Mount Merapi. Prambanan was abandoned in 1006. The site was rediscovered in 1773 (cf Pompeii in 1748) and was first restored in 1885. Restoration was completed, temporarily, in 1953.

In 2006, an earthquake measuring 5.8 Richter shook the land. Quite a number of people died, and Prambanan was badly damaged. Bricks and carvings fell from almost every structure, and most of the buildings became unsafe to enter. So there is not as much to see as there would have been a few years ago. Certainly, Borobudur is much the more impressive.

There are 242 pras (small shrines) on the perimeter, in concentric rows, of which only two still stand. Half of the original stones have disappeared; as always, they were used for building.

In the central zone there are eight larger candi, or temples. The three largest were dedicated to Vishnu, Brahma and Shiva. The shrine in front of each is dedicated to the god’s vehicle: Nandi, the bull, vehicle of Shiva; Angsa, the goose, vehicle of Brahma; Garuda, vahana of Vishnu. 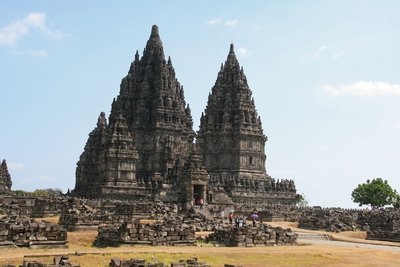 The temples are decorated with pumpkin-shaped things. Each is a lingaratnapatma – a fertility symbol. 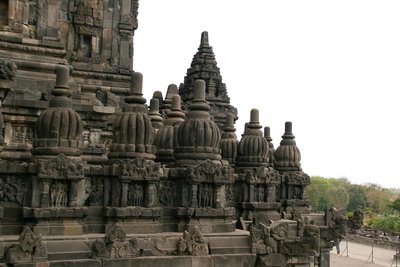 As far as I can recall the only temple that you can enter is the temple of Vishnu, inside which is a statue of same, and a yoni and linga. There is a central chamber, and four chambers facing the cardinal points.

Prambanan is also known as the temple of Lara Jonggrang. If I remember the story correctly, Lara Jonggrang was an unenthusiastic bride who, as a precondition of marriage, required her prospective bridegroom to erect 1,000 temple statues in a single night. (Her bridegroom had killed her father, so her qualms are understandable.) The bridegroom got spirits to help him, but still managed only 999 before the cock crowed, and he was so enraged at her punctilious refusal on grounds of non-performance that he turned her to stone. She became the thousandth statue. She is, supposedly, the image in the Durga cell of Shiva’s temple.

It being a Hindu temple, you can find naughty reliefs if you look. Of course you look. 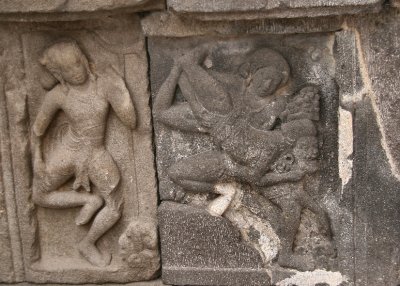 Posted by Wardsan 08:17 Archived in Indonesia