I still have not started work (it will happen one day), so this week I went for three walks in the southeast. The Met Office predicted a deluge on Wednesday; it is now Friday and it is yet to arrive. False Noahs.

On Monday I walked from Manor Park to Epping via Chingford. The second part of the walk is more rural and more pleasant. The route goes through Epping Forest, which was used as royal hunting grounds from at least the twelfth century until the late Stuarts, who didn’t care for hunting much. Queen Victoria gave it to the nation in the last century, to provide a rural recreation area for the growing working population of East London. While walking I saw lots of crows, magpies, tits and robins, and a jay, a woodpecker and a skylark. Here is a peacock at Wanstead Flats. 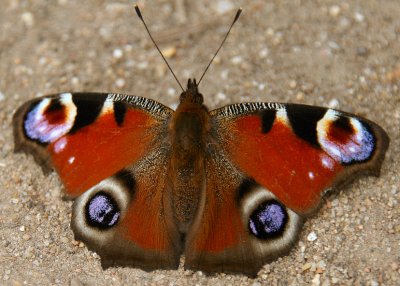 On Tuesday, down the river from Kew to Hampton Court via Ham House. Ham House was built from 1610 and retains some interesting décor and paintings from Tudor times, and some interesting old-fashioned formal gardens. 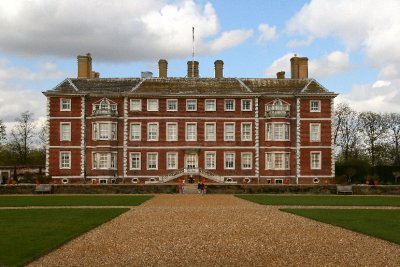 There were snake’s head fritillaries, our only native fritillary. They grow wild at Magdalen College, Oxford, but are usually cultivated. 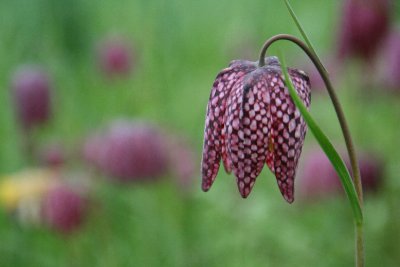 The first part of the path, between Kew and Teddington, is much prettier than the second. Almost all of it used to be attached to one royal palace or another, and much remains Crown land. I saw about twenty cormorants, including a group just roosting in a tree, which I have never seen before, as a fox strolled by beneath it annoying the crows.

And well over a dozen grey herons. This one was in Richmond. 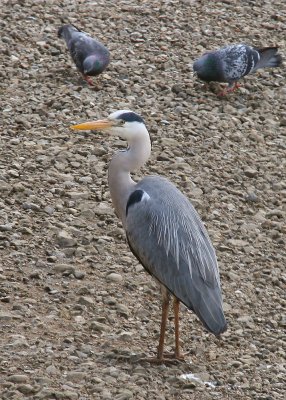 All along the river from Ham House onwards you can see and hear rose-ringed parakeets in the trees. They – and the other wild parakeet species in the southeast - are descended from captive birds liberated forty or more years ago; there is a story that they escaped from Shepperton Studios during the filming of The African Queen, or were set free by Jimi Hendrix, or escaped from a container at Heathrow. All of these could be true, but there were certainly escaped parakeets in England from the nineteenth century. The ancient Greeks kept the Indian subspecies as pets, and the Romans likewise kept the African subspecies, and there are feral populations along the Rhine and in Barcelona, and in Japan and Florida. They now range, in their thousands, from Croydon to Esher; they have even been seen in Peckham. They are very pretty and very jolly, but it is likely that they displace local species such as woodpeckers, nuthatches and starlings. Like many invaders, they thrive partly because they have no natural predators. 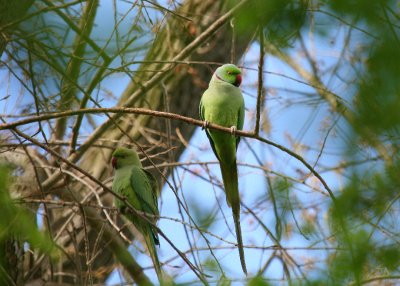 The gardens in Hampton Court are covered in flowers right now. 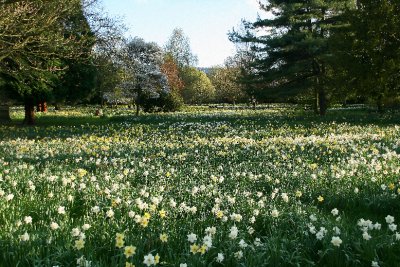 Here is a deer in Bushy Park, which used to be the hunting grounds for Hampton Court Palace. The winter fur is just being moulted and the antlers are growing. There are so many deer in the park that the ground is carpeted with deer droppings. 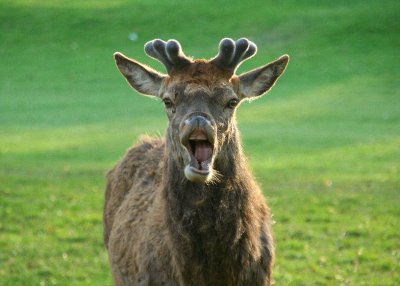 Another heron, in Bushy Park. 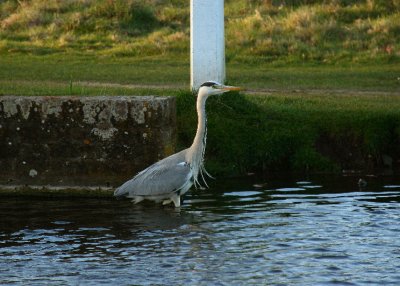 On Wednesday I walked over the cliffs from Hastings to Cliff End and then along the Royal Military Canal to Winchelsea. Hasting and Winchelsea are two of the seven (yes) Cinque Ports. Hastings is kiss-me-quick hats, bingo, amusement arcades and mini golf, but also a good place for cockles, eels and whelks. 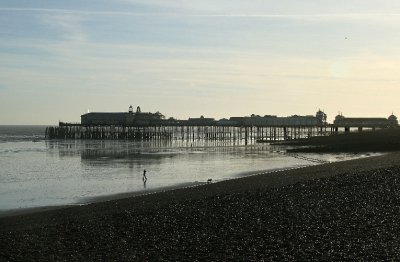 The cliffs above are covered in gorse, currently in flower. 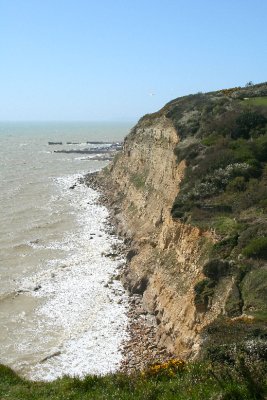 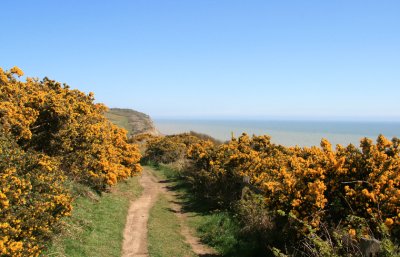 The path goes through Fairlight, a windy place on top of the cliffs, where every cottage has a ceramic nameplate on the wall. Union and St George flags fly on poles. The natives are friendly, so long as you’re white I expect. It is part of the constituency of Hastings and Rye, which, surprisingly, has a Labour MP with a majority of 2,000. Until 1997 it was a thumping Conservative majority. The local district council has a large Conservative majority, and the local ward elected three Conservative councillors.

Winchelsea is an interesting place. You pass through a medieval gate and then have to walk half a mile to the village itself. The village used to be one of the most important ports in England, and was then much bigger. But the meadows upstream were reclaimed and farmed and the river consequently silted up.

It has an interesting church, which is merely the chancel of a much larger church. Mmm, lichen on gravestones, isn't it? 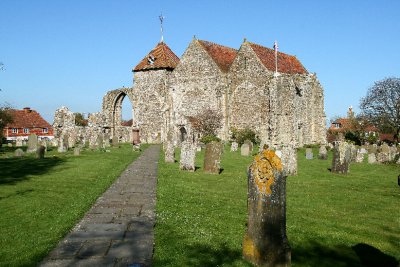 It is not clear whether the nave was ever built, as around that time the French kept on coming over to Winchelsea and sacking the place. Here, in the church of St Thomas, is Edward II, above the tomb of an admiral of the Cinque Ports. 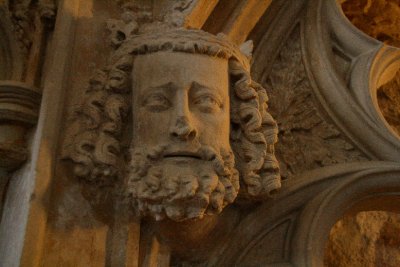 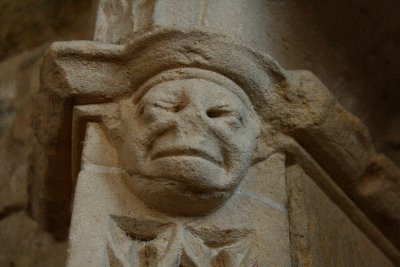 And here are some more pictures of Nha Trang, Vietnam. A purveyor of sunglasses. 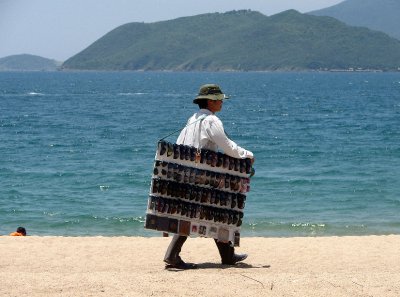 A view towards the sea. 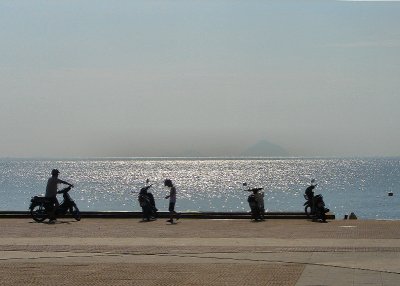 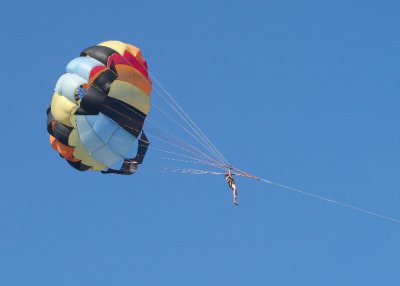 Outside Nha Trang is a well-preserved Cham temple, called Po Nagar. It sits on a hill. 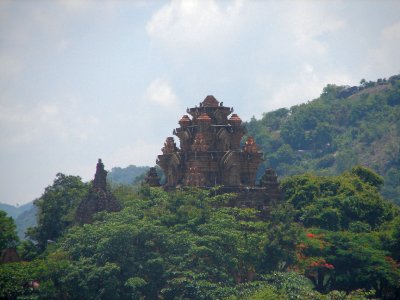 The other tourists there when I visited were Vietnamese. 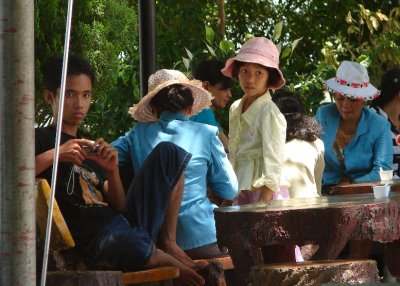 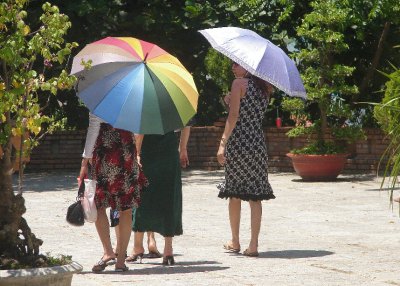 It is still used, although converted now to Buddhism. 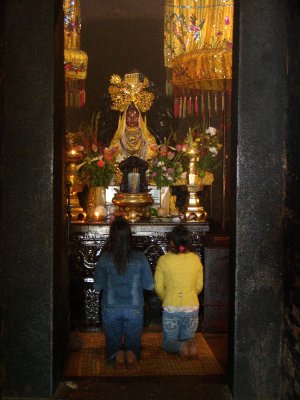 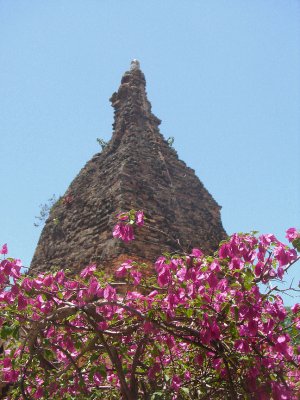 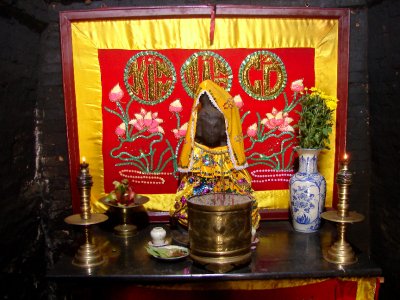 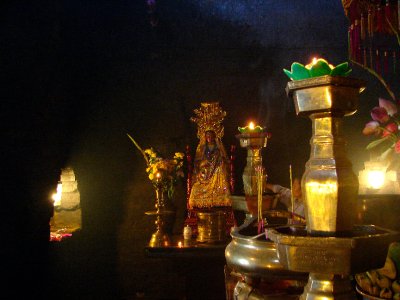 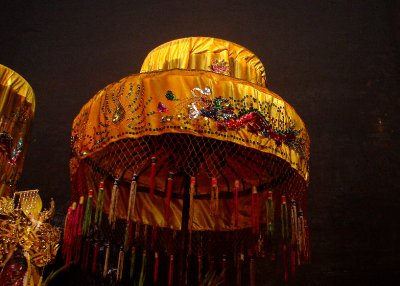 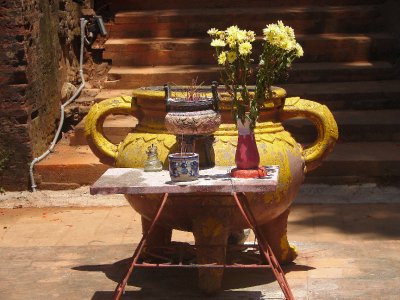 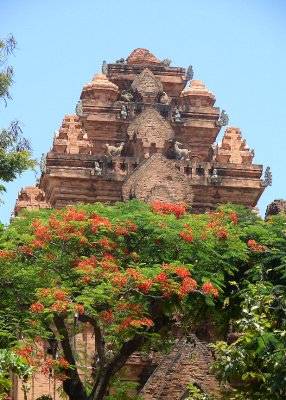 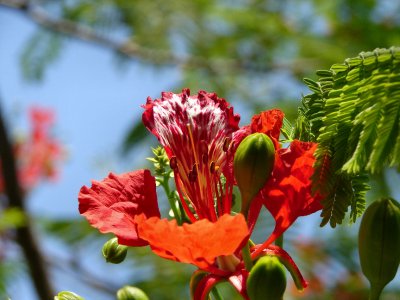 Posted by Wardsan 08:11 Archived in Vietnam