Every evening there are muay thai shows in Bangkok, in either Rajadamnern or Lumphini Stadium. Yesterday I went to Rajadamnern with a couple of people I had met on the museum tour earlier in the day, Dominic and Catherine. There is a dual pricing arrangement – much, much more for foreigners – and the tickets for farang cost 1000, 1500 or 2000 baht. For B1,000 you get to be in a cage at the top. Like being an English football fan in the 1980s. Most go there. 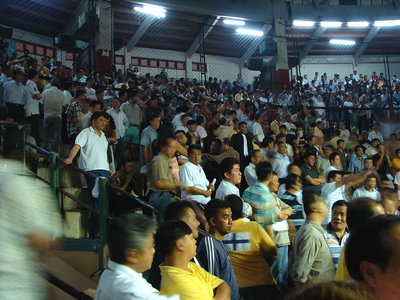 We plumped for the intermediate tickets, closer to the action but not ring-side. B1500 is getting on for £25, which is very steep. There were 8 or 10 bouts on the programme at weights from 48 to 55 Kg.

The stadium is like a small covered bullring or theatre in the round. Aside from a ring of neon ads around the top of the walls, the only lighting is straight down on to the ring, like a snooker table. Very theatrical. 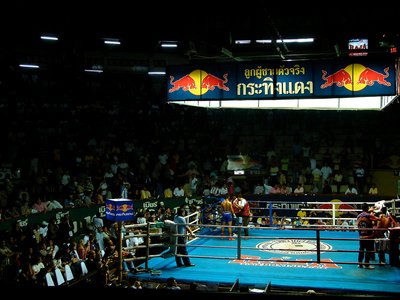 The boxers can punch – they wear boxing gloves – and kick with foot or knee. Only the groin is out of bounds, and that not strictly, it seems. The kids who started the bill couldn’t generate much power with punches and they mainly kicked to the side of the torso. The older guys could pack a punch too. There were at least three knockouts. At every contact, sections of the crowd exclaimed in unison – something like “Eee!” with a sforzando in the middle of the syllable. While those of us unfamiliar with the sport could easily see the kicks and punches, the crowd particularly appreciated the closer work, when the fighters were clinched, kneeing each other in the ribs. 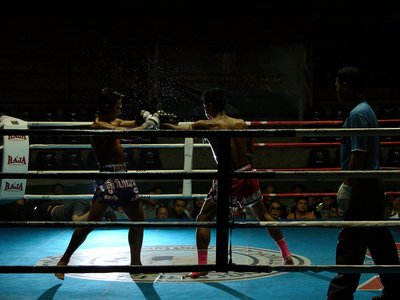 The urgency of the action is amplified by the house quartet: two drums, cymbals and oboe. They play during each three-minute round and also during the warm-ups.

When the fighters enter the ring they are wearing noose-shaped head-dresses. Studiously ignoring the other, they pray at each corner and then conduct a stylised and not entirely graceful warm-up dance. 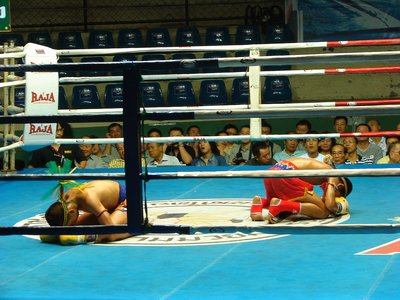 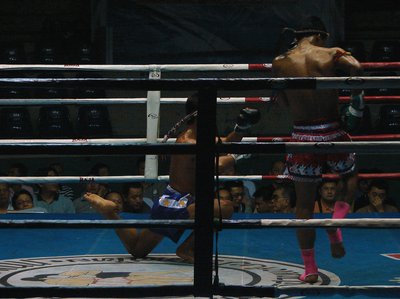 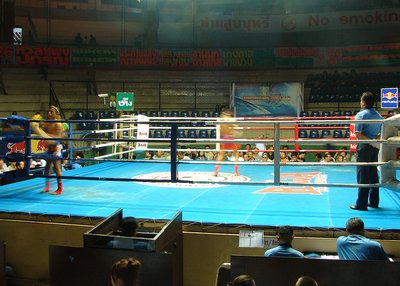 Then each goes back to his corner, where his trainer prays over his head and removes the headgear. 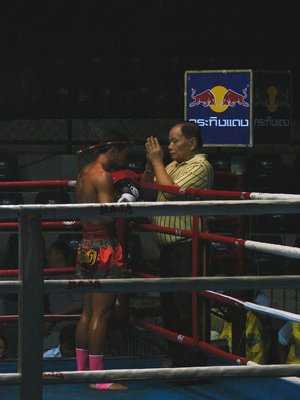 Many of them keep amulets tied around their upper arms for luck.

The fighters were in fantastic shape. Most were built like light middleweights, although one very impressive fighter, who maintained an obvious calmness in the middle of the exchanges, was relatively scrawny. 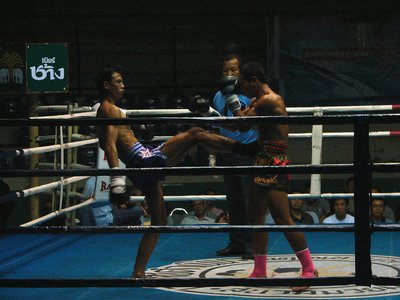 All had overdeveloped abs from all the kicking (the knee is usually raised well before the foot strikes). And all were hard as nails, never showing any pain and always dashing immediately back into the fray after being hit.

The enthusiasm of the crowd was connected to the betting action. The upper and intermediate tiers were filled with tic tac signals both before the bouts and between rounds, and most of the crowd was laying bets. The trading in contingent claims was frantic. Gambling is illegal in Thailand, but pretty much everybody does it, apparently. 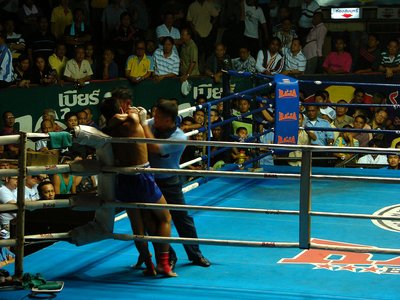 Posted by Wardsan 11:51 Archived in Thailand