In July I spent a few days in the Kinabatangan valley. I have written about this in a previous entry, but my account contained an elephantine omission.

On our first daytime walk in the Kinabatangan valley, the guides were nervous. They knew that a group of wild elephants was nearby; in the group were two young elephants, and the mothers were apt to be protective. The guides were not nervous on their own behalf, since they knew how to avoid elephants, but on behalf of the clumsy unpredictable tourists, liable to do exactly the wrong thing at the wrong time.

In the middle of the walk we duly hear a trumpeting coming from about twenty or thirty yards away. You can’t see twenty yards in the forest, so all we know is that we have met the elephants. The fanfare is very loud, very high and very sudden, and the overwhelming instinct of the majority of the group is to run. We have been clearly told not to, so the runners manage to stop after two or three strides when their forebrains regain control.

We soon hear a very deep, leonine growling, with Dolby surround sound and big subwoofers. There is also a strong smell of elephant. The other sound is the cracking of branches. Indeed, sounds come from three directions.

We walk on slowly and very cautiously. Every so often we catch a glimpse of elephant grey on our left; an elephant is walking parallel to our path. Then we see an elephant up ahead. It sees us too and walks away. Then we spot an elephant on our right; it too walks off when it sees us, so the path is clear and we continue walking.

Seeing wild elephants at a distance is far more thrilling than seeing domesticated elephants up close. The guides’ patent fear adds to the thrill; they know that the elephants are dangerous and their fear communicates itself to us.

The Bornean pygmy elephant is a distinct sub-species, Elephas maximus borneensis, of the Asian elephant. It was confirmed as a sub-species in a study conducted at Columbia University, before which it was thought that the elephants had been transported to Borneo by man in recent times; actually it arrived tens of thousands of years ago. The pygmy elephant has larger ears than other Asian elephants. It is smaller, as its name suggests, but the epithet is harsh: adults stand 1.7-2.6m tall, and other Asian elephants 2.5-3m. When you see a Bornean elephant it does not strike you as lacking stature. 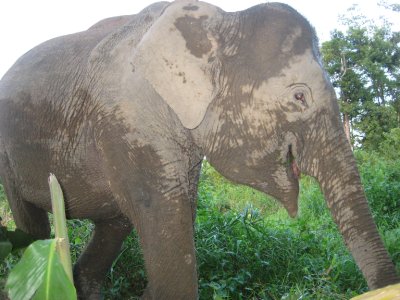 Males reach full size at around 25, and they can weigh three tonnes. They stay with the family group until they reach sexual maturity at around ten or twelve, at which point they are kicked out. The others live in family groups of five to ten.

A couple of days after that meeting we took a sunset boat trip, and Luis parked the boat at a part of the bank that looked much like any other. He told us to stay in the boat and disappeared for at least ten minutes. Then he returned, and motioned us to climb silently up the muddy bank. Using trees for cover, we peered out into a clearing and saw an adult feeding.

Then a juvenile elephant walks straight past us. That is interesting, but not good. We are between the baby and its mother and aunts; they won’t be happy. Sure enough, mama walks up the path and trumpets, and we retreat as fast as we can. The mother sees us, trumpets again, and runs back. It is well known that elephants cannot jump, but she changes direction very quickly, pushing off with her forelegs like a deer. Then she walks very tentatively up the path and stares at us for a long time. We are all pretty tense, and ready to jump. 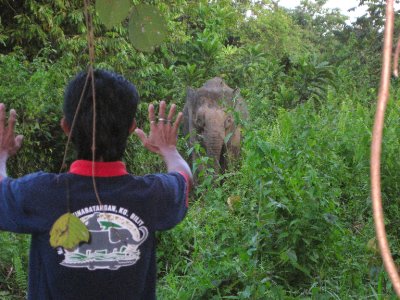 The female very deliberately walked twenty yards away and started eating tall ferns while watching us. 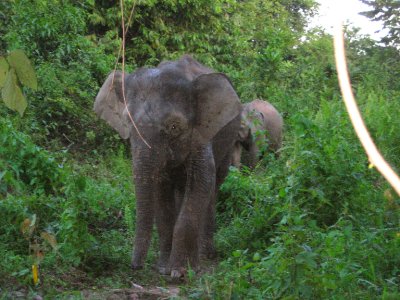 She kept up a low growling. Unfortunately, at this point two other boatloads of tourists arrived, attracted by the empty boat on the bank. They made a lot of noise and blocked our view. Three adult elephants arrived on the scene, with a tiny infant between them, and began to growl and trumpet. They made it very clear that they desired us to leave; it was a menacing moment. The guides told us to clear out and get on to the boat, and so we did.

Then the first adult simply walked past us, and the baby followed. 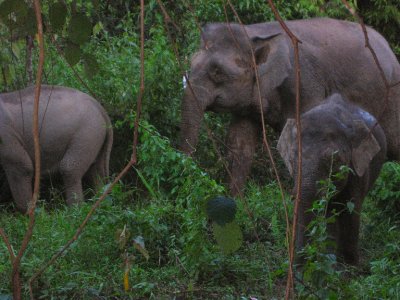 The two guides, free of worry about their defenceless charges, stayed on the bank and took photos of the baby, which the adults had left. The baby was thoroughly interested in the two guides. At one point it decided to charge – they can move very quickly – and Luis had to run down the bank. Mostly it turned its backside on Luis and walked backwards, hoping to run him down in reverse. 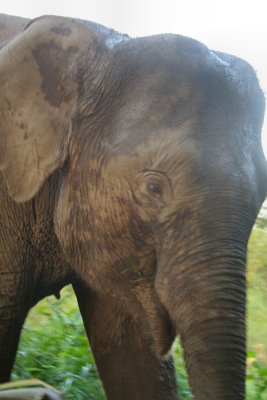 This was the closest encounter we had, and it was I suppose inevitable that I managed to go out that afternoon without a memory card. These photos are, therefore, courtesy of Anna Östman and Rachel Seys. Luis took the close-ups. 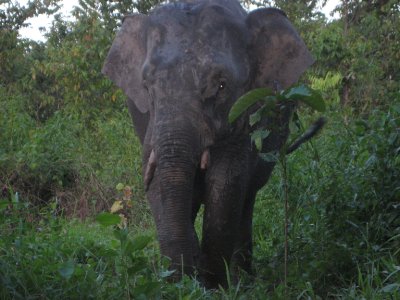 On my final evening in the lodge, I thought someone was breaking into the bathroom. There were loud cracks outside the hut.

The lodge was surrounded by a fence, energetically electrified to keep the elephants out. My hut was right by the perimeter, and the elephants were just beyond the fence, so they were just a few yards away. I went out to check. I could not see a thing. I just heard spooky noises of breaking branches, five metres away.

After supper we all walked to another part of the perimeter, where we could see a group feeding by the light of the moon. The most amazing thing: the violent cracking of large branches, which makes you realise the power at their disposal; and the loud growling, very deep indeed, which sounds like a large ferry engine. Indeed, it can be felt as much as heard, like the subsonic notes that precede an earthquake.