The Grant Museum of Zoology and Comparative Anatomy, University College of London, is more or less on the site where Darwin lived after he married Emma. It is where his first two children were born. Later they moved to Down House near Bromley, where they had eight more children.

The collection was founded by Robert Grant in 1827. (Grant later taught Darwin when Darwin was studying medicine at Edinburgh.) At that time the university had no collection for teaching purposes, so Grant created one. By the time he died, in 1874, the collection had 10,000 specimens. More were added by later curators, and sadly the Museum also holds the collection of T H Huxley, which resided at Imperial College until Imperial closed its zoology department in the 1980s. The collection is now the only one in London still used for the teaching of comparative anatomy.

It is largely a collection of bones and specimens in spirit jars. You don’t go there to learn a lot about zoology. It is in some ways more interesting to the connoisseur of museums: as an exhibit in its own right. It is the epitome of the Victorian Museum. It is small, and packed with skeletons in glass cases. The exhibits are of probably limited didactic value for schoolchildren. Most specimens are anciently and illegibly labelled. Few extraneous facts are given. The cast of an Archaeopteryx specimen refers to the original specimen as being in the "British Museum". Yet it is many years since the large Victorian cathedral of science in South Kensington has been referred to as the British Museum (Natural History) rather than the Natural History Museum, although formally its name changed only in 1993.

Some of the labels in the Zoology Museum in Cambridge are equally old: one of the stuffed birds of paradise – Prince Rudolf’s bird of paradise - is labelled as coming from British Central New Guinea.

There are ten known specimens of Archaeopteryx, all from the Solnhofen limestones in Bavaria. The first, a single feather, is now in the Humboldt Museum, Berlin. It may not be from Archaeopteryx at all. The first skeleton was found in 1861 and sold to the Natural History Museum. Both the slab and the counterslab are in display, in different rooms. The counterslab has a jaw with teeth.

Most of the other specimens remain in Germany. One has gone missing. They may not all be the same species.

Some of the specimens are of extinct animals.

There are a couple of central rock rats in a jar. These Australian rodents have not been seen alive for years and are probably extinct.

There are some long bones and vertebrae from a dodo. The dodo, Raphus cucullatus, became extinct in the 1680s, well before the museum was founded, and there is no museum with a complete dodo skeleton.

There are also a couple of examples of the quagga, Equus quagga quagga, an animal like a zebra. Darwin writes about them in The Origin of Species (1859) in the same way he discusses the zebra and the ass; they were still alive. They were hunted to extinction, the last quagga dying in captivity nine years after Grant was extinguished. The only quagga photographed was at London Zoo in 1870. One of the skeletons was part of Grant’s collection; the specimen in a few pieces in a spirit jar was dissected by T H Huxley.

And there is a skull of a thylacine, also known as a Tasmanian tiger (but actually a marsupial predator closely resembling a dog) which became extinct in 1936.

And there are some other interesting exhibits:

Quite a few sea mice, with what looks like iridescent fur. They are actually marine polychaete bristleworms, Aphrodite aculeata.

An elephant heart, which weighs between 20 and 30 kilos.

A bell jar full of moles.

An egg of an elephant bird. These went extinct, in Madagascar, in the 1700s. I would estimate it to be eight times the size of an ostrich egg.

In Hanoi, a few miles from the city centre, is the Ethnology Museum. It is well worth a trip. It is popular with Vietnamese, some of whom to have wedding photos taken. 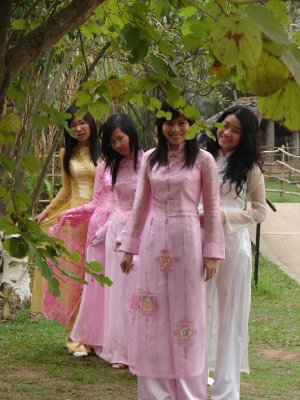 Vietnam has fifty-odd peoples within its borders – although one of these, the Kinh (or Việt), is top dog. The Kinh make up 86% of the population of the country, and are in the majority everywhere except in the highlands of the north, where there are more Tay, Hmong and Dao.

At the museum, people are defined linguistically and split into Austroasiatic; Austronesian; Thai-Kadai; Hmong-Yao; and Sino-Tibetan. I met plenty of all of these on my trip.

The Austroasiatics include speakers of Viet-Muon and Mon-Khmer languages, and there are about 80 million of them in all. There are two national languages in the group: Vietnamese and Khmer. Twenty-five ethnic groups speak these languages in Vietnam. There are nearly a million Khmer in Vietnam, largely in the Mekong delta (which is just downstream from Cambodia).

Austronesian languages are spoken in Indonesia, the Philippines, Singapore, Malaysia, Brunei, Micronesia, New Guinea, Polynesia and Taiwan (the last being where they radiated from). There are about 200 million speakers, but only 9 million on the mainland of Asia. Most Austronesian speakers in Vietnam live in the central highlands. The language of Champa was Austronesian, as are the Ê Ðê and Gia Rai languages.

In all there are about 75 million speakers of Thai-Kadai languages, mainly in Vietnam, China, Laos, Burma, India and Thailand (look at a map and you can see that none of these countries is far from the others). Originally the language group came from China. The group includes Thai and Lao. They are said to be distantly related to Mon-Khmer and Vietnamese languages. In Vietnam its languages are spoken by eight ethnic groups, mainly in the northern hills.

Hmong-Yao languages are spoken by about 8 million people in Vietnam, China, Burma, Laos and Thailand. The Hmong, with 6.5 million people, are the largest group in the family. They are also largely in the north.
Finally, the Sino-Tibetan group is, not surprisingly, the world’s largest, with 1.2 bn native speakers. There is not much point trying to say where it is spoken; perhaps it is not widely spoken in Antarctica. Most within the group speak Han (Sinitic) languages. The Tibeto-Burmese branch has only 56 million speakers. In Vietnam the Chinese are known as Hoa; there are nearly a million of them, half of whom live in Saigon.

It is confusing enough – as my blog on Sapa showed – but without visiting the museum I would not have had a clue.

Within the grounds are quite a number of authentic buildings.

One highlight was a longhouse built by the Bahnar. (I saw several very similar on my trip down the Ho Chi Minh Trail.) Around the buildings swarmed schoolchildren: “hello!”. 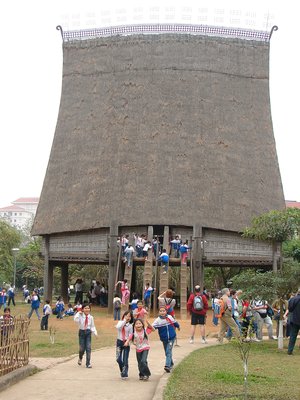 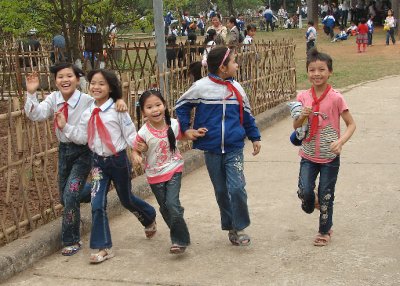 Another was a huge communal longhouse built on site by Ê Ðê people. It is over forty metres long. It is modelled on a longhouse in the region of Buôn Ma Thuột. Some longhouses were 200 metres long in the past. Sadly, the longhouse tradition has disintegrated since the 1980s. 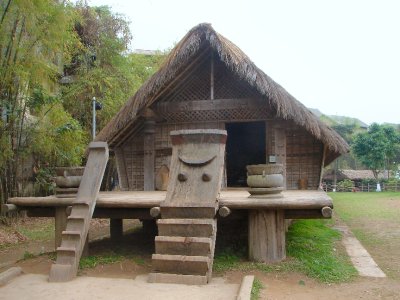 Like most tradition buildings in southeast Asia, the building is supported on stilts. You enter by climbing up a tree trunk with notches in it. There is a verandah at each end, and the main entrance faces north. 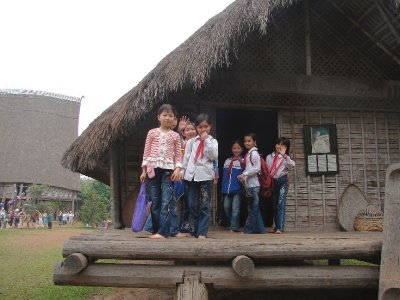 When people sleep in it, they have to keep their feet pointing west. The main utensils and stores of value seem to be the large pottery jars, in which wicked rice wine is kept – and gongs. 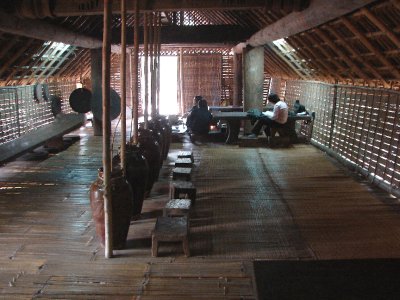 Another interesting building was the Giaray funeral house, built by five Giarai Arap villagers in 1968. Around the sides are wildly pornographic sculptures carved from tree trunks with adzes and cutlasses. They symbolise fertility and birth, of course. It is built for just one funeral, and abandoned afterwards. I like the expression on this guy’s face. 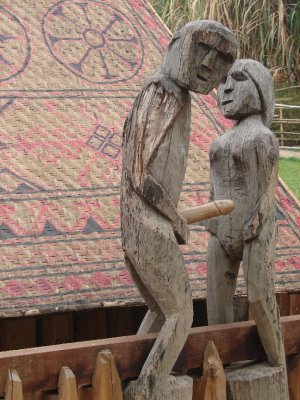 The Cotu tomb was built in 2005. It is built for the second funeral of a high-ranking dead person. The coffin is exhumed and placed on a carved tree trunk. On the top of the tomb and elsewhere are handsome carvings of buffalo heads, blackened with dye made from charcoal, brown tubers and sugarcane juice. 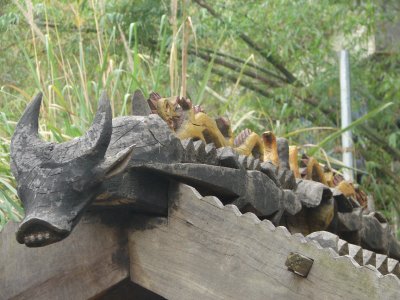 Posted by Wardsan 10:52 Archived in Vietnam