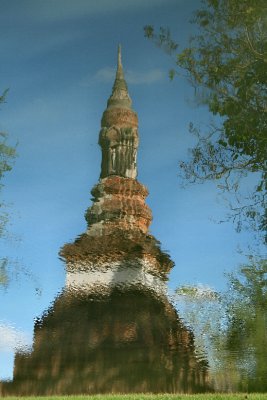 In three days in Ayutthaya and Sukhothai I visited twenty-odd wats and three museums. Both are UNESCO World Heritage Sites. Ayutthaya is nearer Bangkok (80 km or so north; two hours by commuter train; 15 baht) and I visited it first, but I’ll mention Sukhothai first because its golden age preceded that of Ayutthaya. Sukhothai is a long way further north of Ayutthaya, at 17º N 100º E.

In the ninth and tenth centuries the Khmer kingdom, which took over the area now corresponding to Cambodia in the first half of the ninth century, pushed into Vietnam, Laos, China and northeast Thailand. Their culture was Hindu, although the Khmer leaders converted to Mahayana Buddhism in the late twelfth century. Their religious architecture therefore includes the usual Hindu pantheon, particularly Shiva and Vishnu. Like the Chams in Vietnam, they often worshipped Shiva in his impersonal form as a linga. The most notable architectural style is the prang, a tower shaped like a cob of corn. Again like the Chams, and like the later kings of Ayutthaya, the king was a remote, all-powerful devaraja, a god-king, a living embodiment of Shiva.

During the period when northeast Thailand was within the mandala of Angkor, ethnic Tais pushed down in large numbers from southern China into what are now Thailand and Laos. The land became known as ‘Syam’.

Jayavarman VII reigned from 1181 to 1219, and he spent so much on temples and monks that the economy “overreached itself” (I’m not sure what this means exactly; it wouldn’t have been a property bubble, since these wats would not have been traded. There was cash money, but the economy was not highly monetised. More likely, therefore, that the state’s use of the main factor of production – by corvée - crowded out other activities, particularly those that required a food surplus, such as military defence). Shortly afterwards the empire began to fall apart. The collapse was finally provoked by the invasion by Kublai Khan’s Mongol hordes between 1215 and 1250. The fact that there was bubonic plague at the time may also have contributed, as it did to the decline of the Roman Empire – for which see the entertaining Justinian’s Flea.

The Mongol invasion also forced the Thais to unite among themselves to face the threat. At this time Sukhothai, which is now in the middle of Thailand, was the main Khmer outpost in the region. Two Thai princes joined up to force the weakened Khmers out of Sukhothai. One of the princes became king Intradit and founded a dynasty known as Phra Ruang. At first it was as local as the Capet kingdom in the Île de France, but it expanded under the reign of Intradit’s youngest son, Ramkhamhaeng, ‘Rama the bold’. Ramkhamhaeng expanded south along the Chao Praya valley and, mainly by marrying his children wisely, gained supremacy over most of Thailand, and parts of Laos and Burma.

Several momentous events occurred in the reign of Ramkhamhaeng. The earliest example of Thai script is on a stone from Sukhothai dating from 1292. In it Ramkhamhaeng records how he came to the throne, what a wonderful ruler he is and what he has done. “Sukhothai is ranked in the top six places in the world for ease of doing business”, he says. "The green goods sector is the sixth largest in the world. We have one of the lowest rates of work-related deaths and injuries in the known world." Or something.

He also records that in 1283 he invented a script for the Thai language. This was not the first writing to be used in Thailand, as Pallava script is found from the seventh to the ninth centuries, Khmer script from the tenth to the sixteenth centuries, and Mon from the eleventh century to the present day. But it was the first Thai writing, Lai Sue Thai, and in 1992 its 700th anniversary was celebrated with great ceremony.

The early Sukhothai script had 39 consonants, 20 vowels and two accent signs. Unlike Pallava and Khmer, and modern Thai, the vowels were incorporated into the main line of consonants, rather than floating over or under. The letters and words are therefore easier to distinguish than in modern Thai, which has 44 consonants, 26 vowels and four accent signs. The Sukhothai stone is so important that it is on the UNESCO Memory of the World Register, whatever that is.

Ramkhamhaeng also started building temples, and he espoused Theravada Buddhism instead of the Mahayana Buddhism then practised by the Khmer leaders. Ninety per cent of the population of Thailand are now Theravada Buddhists. In 1284 he ordered the building of a chedi at Si Satchanala. The wats at Lopburi, Sukhothai and Si Satchanala date from this time until the fifteenth century.

Sukhothai – and therefore Thai - Buddhism is syncretic. It encompasses large parts of Hinduism. So not only were the Khmer temples in Sukhothai converted to Buddhist use, but the Hindu icons remained. Even now, Thais worship Hindu gods, especially Vishnu (including his seventh incarnation, Rama), Shiva and Ganesh; the Ramayana was reworked into the Ramakien, as I have mentioned before; and garudas and nagas are seen all over temples in Thailand.

Ramkhamhaeng possessed great influence, but the alliance fell apart soon after his death, and by 1320 Sukhothai was back to being a merely local kingdom. It became a mere province of the kingdom of Ayutthaya in 1438, six years after Ayutthaya had captured Angkor.

After the Burmese invasion of 1766-7 Sukhothai was abandoned, and the local administrative centre moved at some unknown date to a new town 12 km to the east, known, confusingly, as Sukhothai. That is where most of the tourists stay and it is a nice place, full of Italian tourists.

Sukhothai also gives its name to an architectural and artistic style. Sukhothai Buddhas have oval, androgynous faces, relatively slim bodies and long fingers - about four feet long in this case. 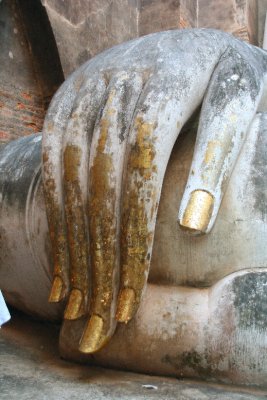 His robes cling diaphanously. And the Buddha has a serene, not to say positively happy, expression. The Buddha may have achieved absolute renunciation of earthly desires, but he seems to be chuffed to bits about it. 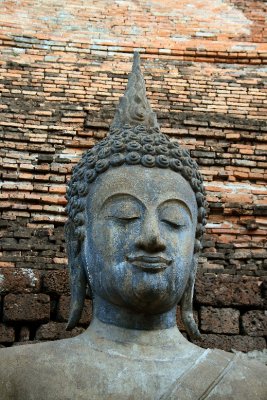 Before the development of figurative images of the Buddha, in the early centuries of the common era, the Buddha was indicated by symbols: the Dhammachakra (Wheel of Law), umbrellas and footprints. The Buddha’s footprint, the Buddhapada, is found in India and Sri Lanka from the second century BC, and the tradition of footprints began in Thailand by the seventh century AD. There are quite a few around Sukhothai. Here is one at Wat Tra Phang Thong, which dates from 1359 AD. 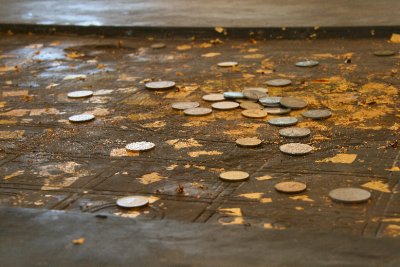 Although seated Buddha images are more common, the image for which Sukhothai is known the walking Buddha in the round, which depicts the Buddha returning from preaching to his mother in Tāvatiṃsa heaven. He has one foot forward and one hand raised in the policeman’s ‘stop’ position. These Buddhas are known from the 13th/14th centuries onwards. 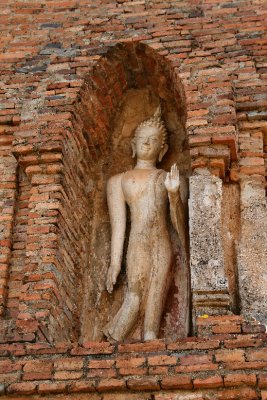 In a day in Sukhothai I rented a bike and visited eight wats and two museums. 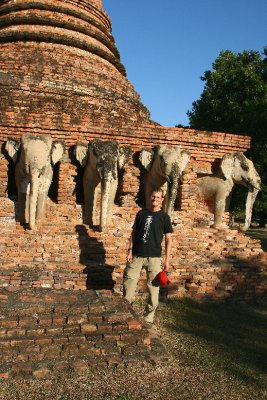 Within the precincts of the town is the Heritage Site, which has been extensively reconstructed. Much of the restored Sukothai is on the water, and there are bright flowers everywhere: it is reminiscent of Augusta National, and indeed it could be a grand golf course, but for all the temples. 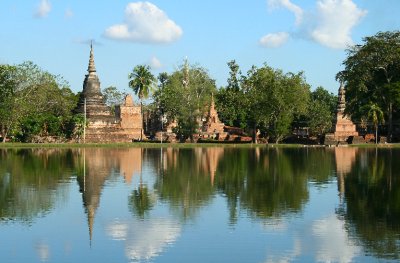 Wat Phra Mahathat is a wonderful, very extensive site. It was the royal temple of Sukhothai, and it grew to be so big that it had one bot, ten viharns, eight mondops and over 200 chedis. All of these were made of red brick or laterite, and covered in stucco.

At the centre, and still-standing, is a late Sukhothai innovation, the lotus-bud chedi. 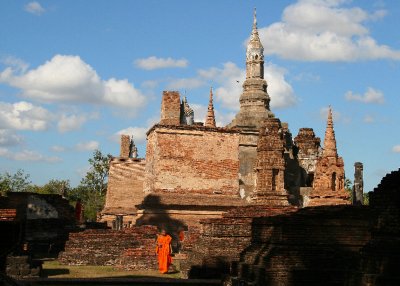 On each side of the main chedi are two very large walking Buddhas. 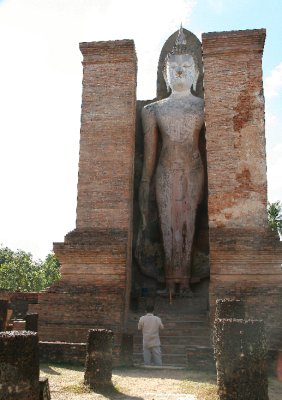 Also visiting the wat was a party of a hundred monks from Sri Lanka. Thailand got much of its Theravada tradition and practice from Sri Lanka, and the religious links are close. The monks were toting cameras and buying souvenirs like any other tourist. 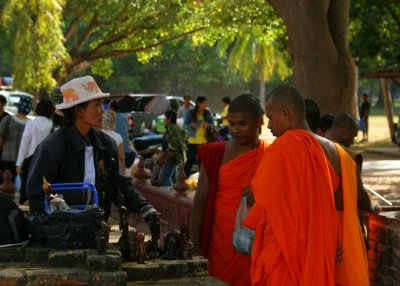 They were due to go to Bangkok for a ceremony at the royal palace over New Year. I chatted to one of them – it was nice to meet a Buddhist monk who could speak English fluently – and he gave me his card and we agreed to go and watch some cricket in Colombo one day. 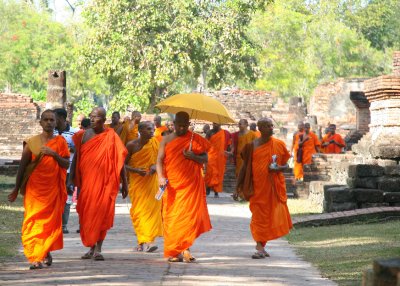 Wat Si Sawai dates originally from the twelfth centuries, predating the Sukhothai kingdom. It has three Khmer prangs built in Lopburi style, with low bases and decorated with stucco, decorated with nagas and garudas. 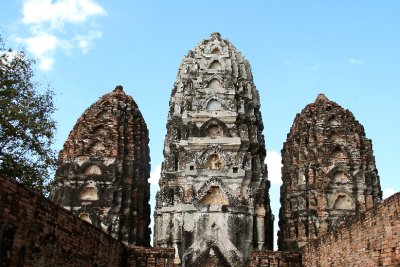 The prangs are made of brick with stucco, and the pillars are of laterite. There were images of Hari-Hara (a combination of Vishnu and Shiva) and of Vishnu as a linga. The later Buddhists simply built a viharn next to the prangs and turned it into a Buddhist temple. Little remains of the viharn. 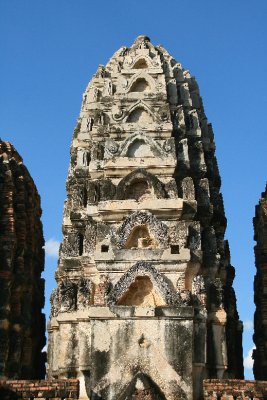 Wat Traphang Ngoen is another lotus bud chedi, with four niches for Buddhas. 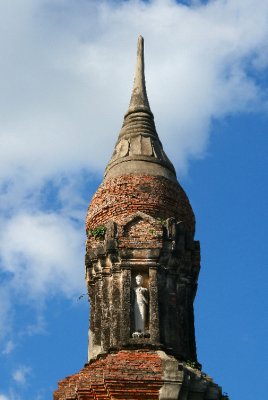 There is a viharn, and a nearby bot surrounded by water. 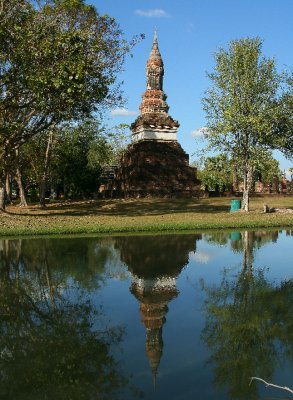 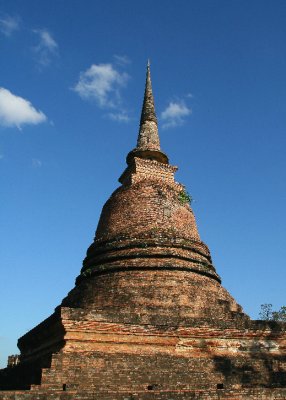 Wat Sorasak is a heavily restored bell-shaped chedi. Its base is surrounded by elephant buttresses. 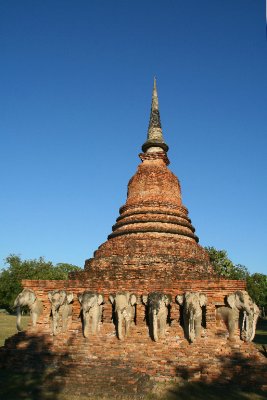 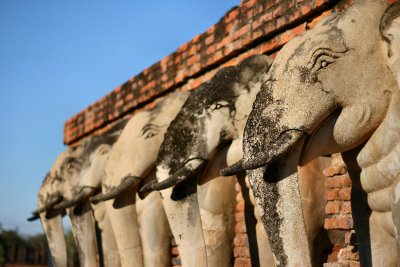 Wat Phra Phai Luang was, like Wat Si Sawai, a thirteenth-century Hindu prasad later converted into a Buddhist temple. It was probably the centre of the old Khmer town. Again there used to be three prangs, of which only one remains. 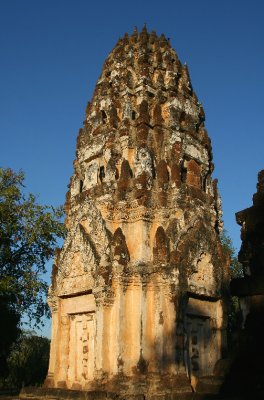 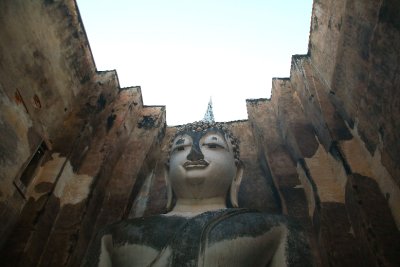 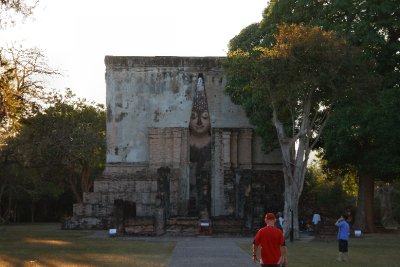 The mandapa has a staircase, which allows one to climb to the level of the Buddha’s face. In principle the staircase could be used to project a voice from the level of the Buddha’s head down to worshippers below. Indeed, there is a tradition that this Buddha speaks to certain privileged people. One of the kings of Ayutthaya, King Naresuan, assembled his troops here before marching on Sawankhalok in the mid-fifteenth century, and he probably got the Buddha to do his talking. 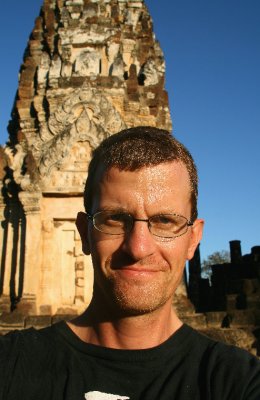 Posted by Wardsan 10:59 Archived in Thailand