In Lovina, on the north coast of Bali, we stayed in a beautiful hotel with a swimming pool, hot water in the basin, a bath, and flowers on the beds. While we were staying in Lovina I dived the Liberty wreck at Tulamben with Franck, another trainee tour leader. It was a reasonably good dive, and we saw a lot of fish. But it was not clear why it should have such an elevated reputation.

From Lovina we travelled to Gunung Batur, the second-highest peak in Bali. On the way we stopped at Gitgit waterfalls. 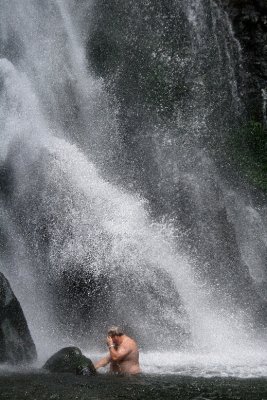 On the Java-Bali-Lombok tour we climbed to the rim of Rinjani, Lombok’s highest mountain; visited a temple on the slopes of Gunung Agung in Bali; climbed Gunung Batur in Bali; and climbed Mount Bromo in the Bromo-Tengger-Semeru National Park in East Java. 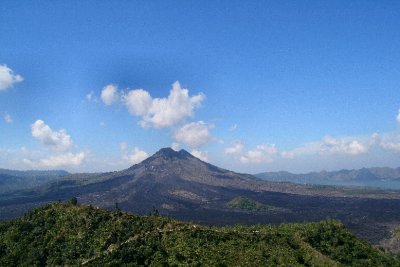 All of these mountains are volcanic. Every hill of any size from the north of Sumatra to the eastern tip of Nusa Tenggara is a volcano, and most of them are active. The biggest eruption in the recorded history of the world took place in the area – and it wasn’t Krakatau.

The big eruption was Mount Tambora on Sumbawa, in April 1815. 160 cubic km of ashes and rocks were ejected, and the energy released was four times that released by the eruption of Karakatau in 1883. The height of the volcano fell from 4,200m to 3,090m in one day – now it is 2,850 m - and over 50,000 people died. 1816 became known as the year without a summer, as ash from the eruption blanketed the Earth, and it was the worst famine in the nineteenth century. Incesant rainfall in Switzerland in July forced Mary Shelley's holiday party to stay indoors and make up horror stories. (Hers was partly inspired by the work of Erasmus Darwin.) The dust-reddened sunsets were nice, though; they may have inspired some of Turner's paintings.

The eruptions and earthquakes are caused by the collision between the Indo-Australian Plate and the Asian Plate. The former is subducted under the latter, which creates very deep trenches south of Java – more on this another time, perhaps. 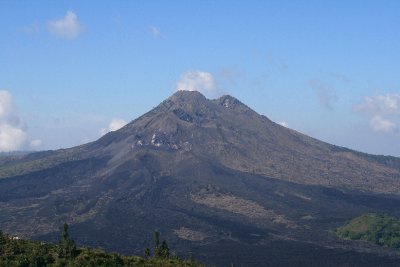 We stayed on the rim of the caldera of Batur at Kalibaru, about 1,500m above sea level, in a nice hotel called the Lakeview Hotel. Indeed, most of the hotels on the Java-Bali tour were splendid. The hotel is ugly, faced in pumice and looks like a castle or a prison, but there is a balcony looking over the caldera, and a really nice bathroom. 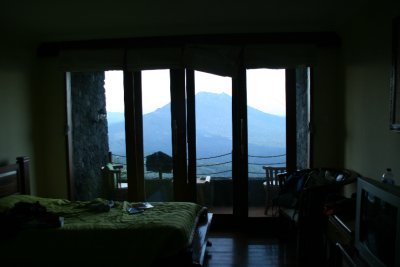 In the caldera is a lake and a volcano, Batur, which last erupted in 1994. The valcano has several vents. 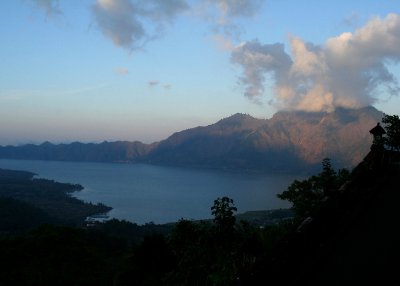 The slopes facing the hotel are dark and bare. The lava looks new, but in fact it dates from 1963. Next to the 1963 flow are older flows, including one that submerged a village; the inhabitants relocated to the caldera rim. 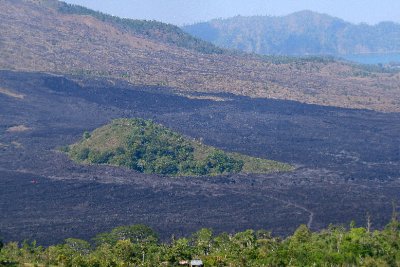 We rose at three o'clock in the morning to climb the mountain. Contrary to the claims of some members of the party, it was an easy climb. It took less than an hour to get to the coffee post, where we watched the dawn. 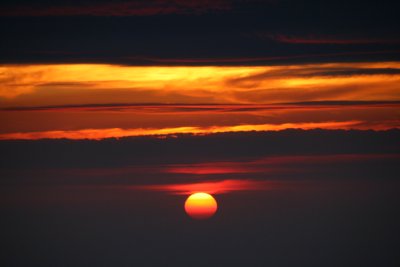 Then it took us another 45 minutes to climb the loop path around the highest crater. On the walk around the summit we passed fumaroles and hissing, hot rocks. 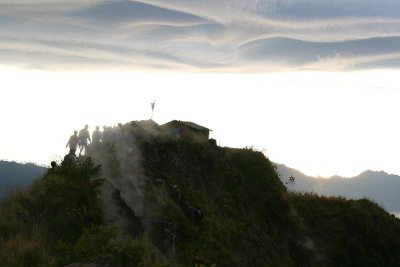 Around the coffee post macaques fought each other or just admired the view. 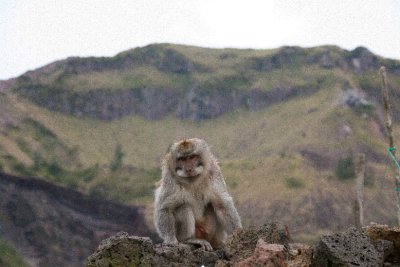 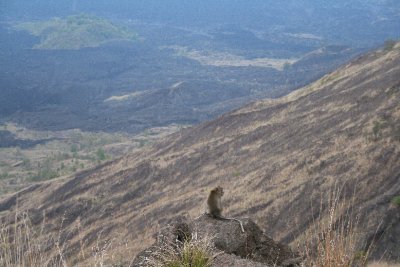 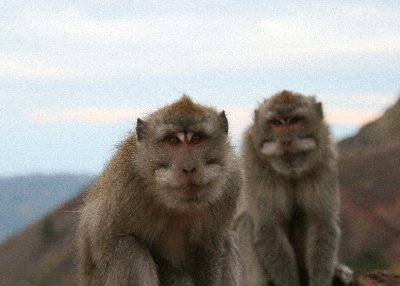 The following day we stopped at Puri Besakih, the holiest temple of Bali. 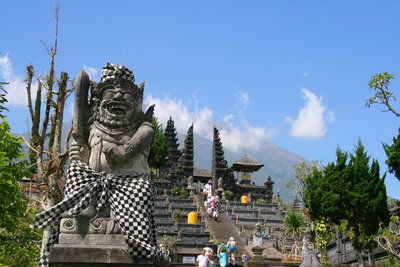 The puri is actually a large series of Hindu temples. Entry to the temples themselves is not permitted to non-Hindus. We encountered another procession. 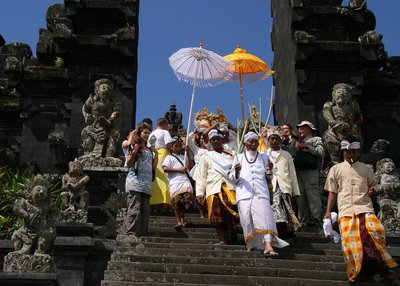 The temple is situated under Gunung Agung, Bali’s highest mountain. 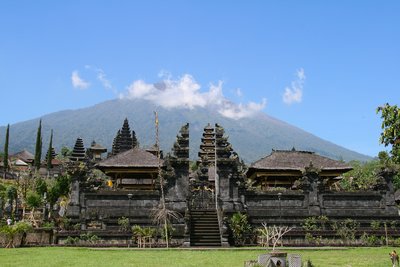 Gunung Agung erupted catastrophically in 1963, killing thousands. The lava flowed all the way to the sea. As so often happens, the eruption was taken to be a judgment of the gods: the catastrophe also coincided with the most important festival in the Balinese Hindu calendar for a century. It is a mystery why the gods persist in speaking elliptically. 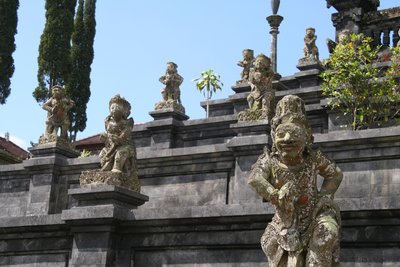 We also stopped off at Semarapura, usually known as Klung Kung. The remnants of the Javanese Majapahit state moved to Bali in the sixteenth century, and their descendants moved here in 1710. Here was the last capital of the last kingdom in Bali, the Gelgel dynasty. In April 1908 the Dutch decided to take over Bali properly rather than running it as a client state. They attacked the palace at Klung Kung. Rather than surrender, the king and all the inhabitants of the palace committed a puputan (a mass suicide), by walking en masse towards the Dutch guns. The Dutch destroyed the palace, and little is left standing. 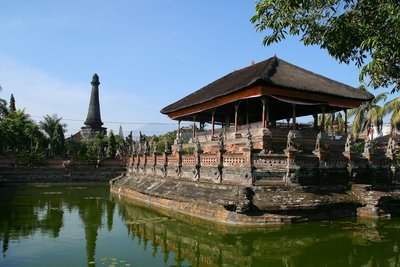 But there is a museum and a couple of bale (pavilions), with wayang-style pictures that have, necessarily, been heavily restored: pictures fade very quickly in this climate. 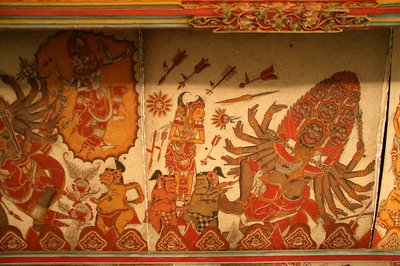 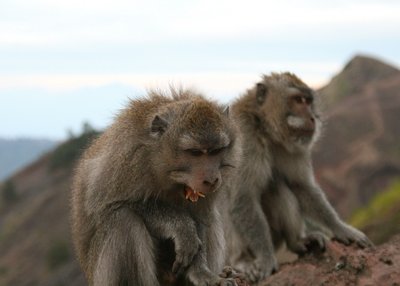 Posted by Wardsan 01:57 Archived in Indonesia