On the definition of poverty

Like any middle-income country, Thailand has very high income and wealth inequality. This is also expressed geographically. Bangkok has about 15% of the population and 90% of the wealth of the country. So, like all cities in the history of civilisation, Bangkok is richer than the country surrounding it.

So let’s guess that Bangkok has income per head of $15,000 compared to the Thai average $8,000 (purchasing power parity basis, from the CIA website). Even allowing for the large regional income disparities in Italy (income per head $30,000-35,000), Bangkok should be poorer than, say, Naples.

No doubt it is, if you look at the proportion of households with fridges, for example. But (central) Bangkok seems much richer than (central) Naples.

This is partly due to the relative absence of visible poverty. The number of beggars is also about the same as in London, for example.

It also has plenty to do with rubbish: littering is an offence in Bangkok and a norm in Naples. In Bangkok, an army of street cleaners sweeps the streets; in Naples the Camorra dumps the nation’s spazzatura on to the streets. 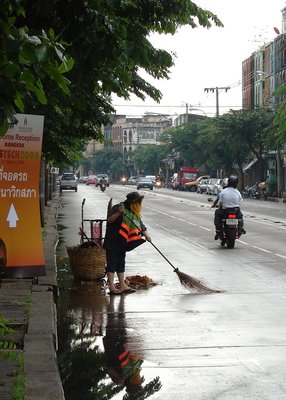 Thirdly, it has something to do with the building stock. Most edifices in Naples appear decayed and there’s little completed new build, in the centre at least. Buildings, shacks apart, don’t appear decayed in Bangkok, and all the tall buildings - of which there are many - have sprouted in the last 20 years.

As usual, I don’t know whether to give to beggars or not. You get feelgood (and Buddhist merit) by giving. On the other hand, unemployment is officially 2% in Thailand and there are plenty of economic niches available: selling lottery tickets, for example. Furthermore, children are trafficked from Cambodia to be put to begging here. They don’t get to keep their revenues.

Posted by Wardsan 08:45 Archived in Thailand