In Khao Sok National Park I oscillate in a string-vest hammock, assaulted by the shrieking of cicadas. Butterflies small, large and immense dart about in the garden in front of me, and within fifty yards there are probably a hundred species of plant. It’s a good spot from which to contemplate the diversity of life, and one of the men who explained it. The four In Our Time programmes on Darwin (Radio 4 podcasts) are first-rate broadcasting. 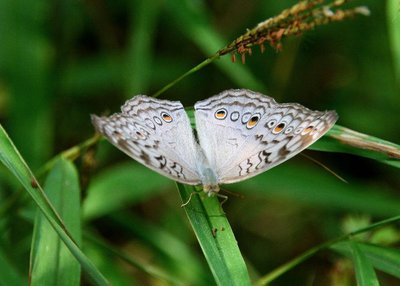 Here is a lizard that lived in and around my bathroom. 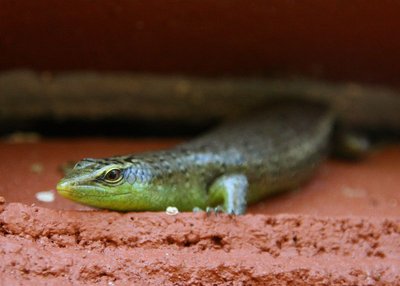 The first thing to do in the park was a night walk in the jungle. I am by now no virgin noctambulist and I know that night walks are hot, sticky, and somewhat stressful. You can’t see much, the noises are loud, and things with too many legs land on you. (The noise is mainly the susurration of insects, the bark of frogs and the hoots of owls.) Sometimes you see nothing all walk.

On this occasion I walked with Nit, who used to be a hunter of tigers and elephants, but became a guide 13 years ago and much prefers his new job. We were relatively fortunate, I suppose. Nit showed me discarded carapaces of cicadas, several spiders, a huge moth, and two mouse deer. Their eyes reflected grey-green in the torchlight, and their bodies appeared grey and very small. They didn’t seem too concerned by the torchlight.

Mouse deer are even-toed ungulates, in the same sub-order as deer, giraffes, cattle, goats, sheep and antelope; but in a different infraorder from all of these. Their stomachs have only three chambers.

I did not see: gaur, benteng, clouded leopard, tapir, civet. Few people see any of these except the last.

The following day I joined an organised trip to Lake Rajaprapa, which was created three decades ago by a dam. Over a hundred new islands were created, and many animals were literally isolated. A rescue operation was mounted at a cost of 1.8 million baht, and 1,346 animals were saved. Most, I imagine, died shortly thereafter, stressed by their capture and homeless. 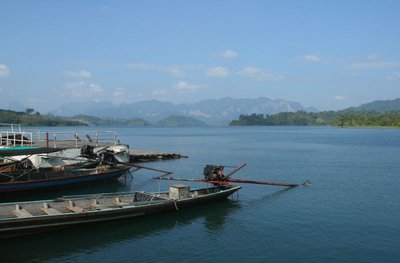 The lake is big – about 165 square kilometres – and highly fractal, so it would be easy to get lost. The lake is fringed and penetrated by unreal Leonardoeque molars and incisors, much like Hạ Long Bay and the area around Ninh Bình. 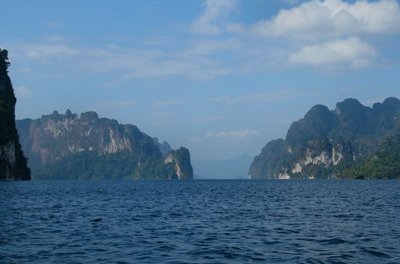 There were about ten of us from the UK and Australia. We took a longtail boat for about an hour to a floating guesthouse. 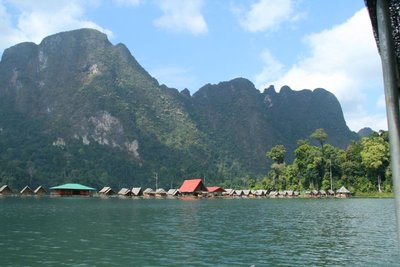 I paddled for an hour in a tubby canoe and eventually came across some monkeys. In shape they closely resembled proboscis monkeys, with pot-bellied bodies and long, thick grey tails. Their backs were black and their bellies light grey. They were dusky langurs. I could not get a decent photo. 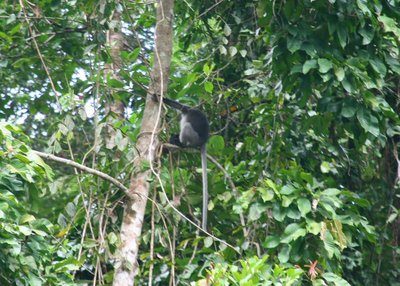 The view from the canoe. 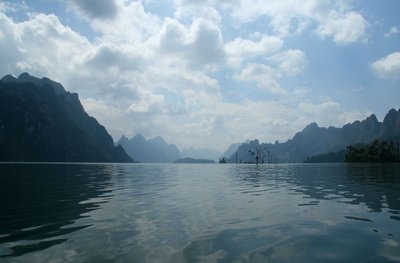 We ate a grand lunch of river fish and various curries, and then took another longtail boat to another part of the lake. We walked for half an hour and saw two chameleons. The guide, Dicky, managed to get hold of one, but it escaped while being transferred between custodians. 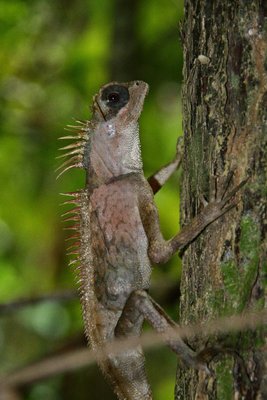 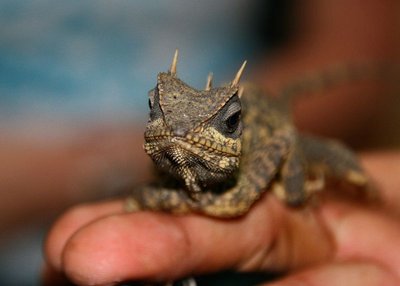 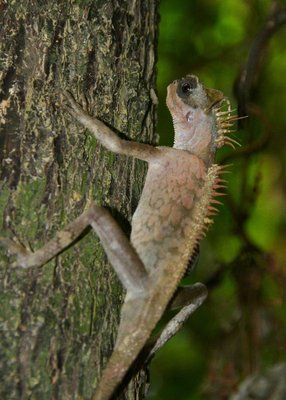 Then we took a bamboo raft to a large cave with stalagmites and stalactites. I’ve seen too many caves. It is a general problem, which afflicts all long-term travellers. You’ve seen something like it before, so you are inevitably less impressed. The same is true for temples, jungles, diving - everything, except perhaps food. The only cure is not to travel - which is worse than the disease.

Two nights ago I dined on orchid tempura; yesterday lunchtime on salad, made with the furled heads of young ferns. (A furled fern head is a crozier, which I think is a wonderful description.) A Thai salad has only two essential ingredients: lime juice and chilli, and huge quantities of both, so that to call the Thai salad hot and sour is like calling Pele a bit good. You very often encounter some combination of green papaya, cashews, coriander, celery stalks, onion, garlic, shallots and green beans, but anything goes.

On the final day at Khao Sok I went for a stroll. I believe that the only way to walk around a jungle, unless someone is shooting at you, is alone or in a group of two. A guide is mildly useful for showing you elephant tracks and telling you stories about how local people use the palms to make alcohol or obtain resin from certain dipterocarps, and extremely useful for ensuring that you do not get lost. But I think I see more animals on my own. I walk quietly, stop frequently to look or listen, and cover two km or less in an hour.

Among other things I saw a few more chameleons. 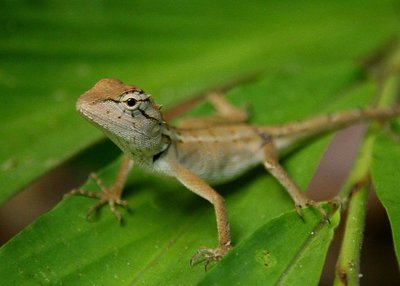 One was eating a bug, very slowly, as if under doctor's orders to chew 32 times. 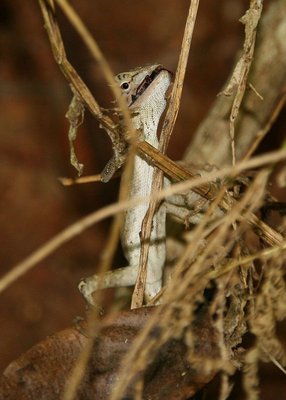 Among the many birds was a largish bird with a long tail, an orange-red breast and navy blue head and wings. It had a beautiful, babbling, varied song. 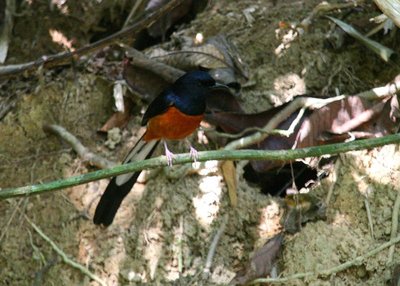 Beside the paths were large tornado-shaped webs. A fanged spider lurked low-slung just inside each funnel, waiting to envenom trespassers. 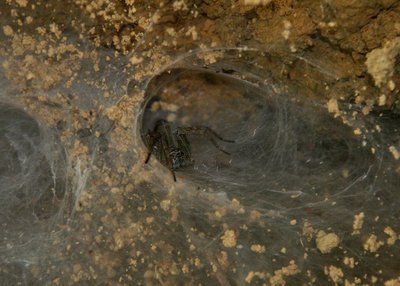 I saw two troupes of long-tailed macaques. The second was not at all shy. Twin babies play-fought. Harold Wilson smoked his pipe. 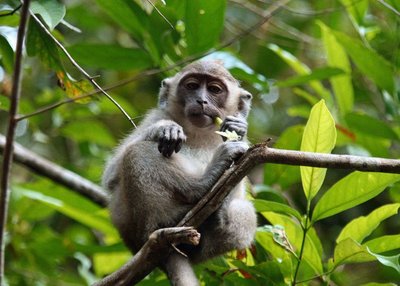 A mutton-chopped adult showed a disturbing obsession with my camera. 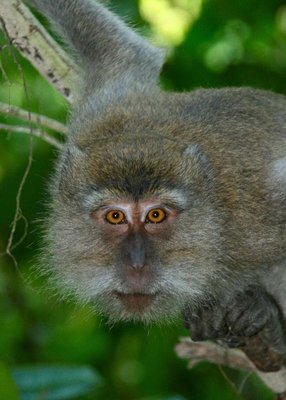 As I came back along the path, most of the family were on the ground. Three of them crouched on one of the information signs, apparently in submission to the only God (and perhaps there is a gibbon God and a langur Lord). They were hoovering insects. 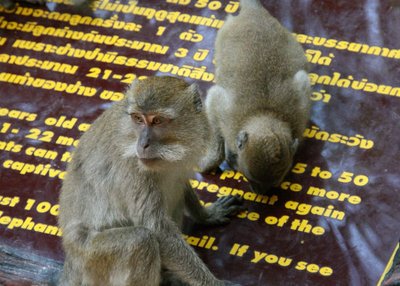 Posted by Wardsan 20:49 Archived in Thailand

I am such a lizard freak. It's amazing how they're so similar in body shape and so different in coloring and adornments. Your pictures are absolutely amazing.