This is a photo of a lampshade stall on Soi Rambuttri. It's not much to the point, but I really like it. 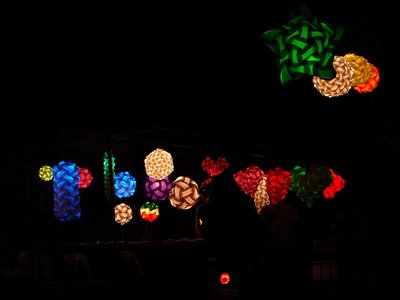 On Monday I moved about 3 miles west from Siam Square to Banglamphu, the backpacker centre of Southeast Asia. Banglamphu is attractive and repellent. Repellent, because it’s entirely full of westerners and locals catering to backpackers’ needs (perhaps not every need – Soi Cowboy off Thanon Sukhumvit is where westerners have gone to pay for sex since a joint servicing GIs opened in the Vietnam War). It’s a neon city, selling cheap clothes, massages and all kinds of food and drink. 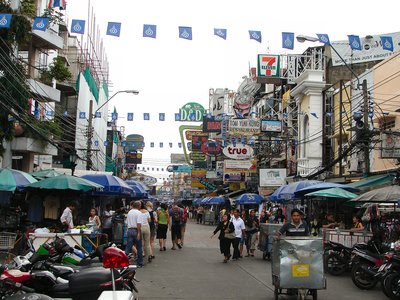 All the bars have televisions showing a Hollywood movie or European or British football. Banglamphu has nothing to do with Thai culture. And I don’t particularly want to be tattooed, have my hair braided, have a facial of any kind or knit my own cereal. 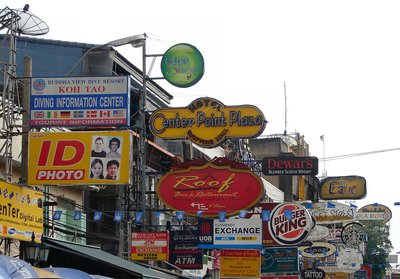 On the other hand, I wrote this while drinking a beer in a bar playing acceptable low-key western dance music; and after five days of rice for breakfast, lunch and supper it was a welcome toss-up between a pizza and some kosher food. The pizza won. It was bad, but at least it wasn’t made from a variety of grass. 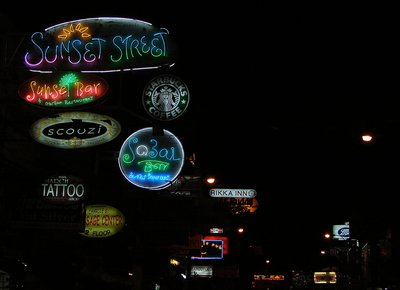 Furthermore, not least wherever the Chinese have settled - which is almost everywhere - there have always been foreign enclaves. The name we foreigners give the Thai capital city comes from the name Chinese traders gave to their village on the banks of the Chao Praya. Bangkok meant something to do with plum trees. When General Thaksin moved his capital from ruined Ayutthiya, in the eighteenth century, he moved it to Thonburi on the west bank. His successor Rama I moved it across the river to Rattanakosin and renamed it Krung Thep, City of Angels. That is the abbreviated form: the full name has another 100 syllables. Large parts of Thailand have in the past been controlled by regional powers from what are now Burma, Laos and Cambodia, as well as controlling in their turn Laos, Cambodia and much of Malaysia. There have been Burmese and Lao here for a long time. So the 'authentic' Thai Bangkok has never existed. Khao San Road is just the 21st century version. 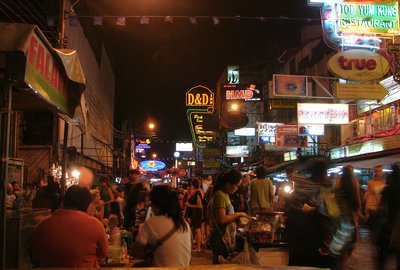 The beer, by the way, is ordinary. This is a problem, because I haven’t had a drop of wine since trying to drown out sociopathic-Frenchmen-induced sorrows on the flight. Neither Singha nor Chang are dry enough. This is more noticeable at the bottom of the glass: it’s probably 28 degrees right now and my dregs are warm. Leo is just about acceptable. Lao Beer is supposed to be the best in the scrotum of Southeast Asia (er, is there a better term for the Indochinese bulge?), so that is a reason to look forward to Luang Prabang.

Many of the customers’ faces are East Asian. I think I remember reading that the largest source of tourists in Thailand is Japan, and it would not be surprising given their population, income and propensity to travel. There are also an increasing number of Indians, so the standard of cricket is bound to be rising (there are some cricket matches in Bangkok). But second to the Japanese, I think, are the Brits - about 750,000 of us last year. But the angrit (apologies to Celtic nations, but the term is inclusive) are only about a quarter of the Europeans here, and I have heard plenty of German, French and Dutch, and some Danish, Finnish, Russian and Italian. We are all farang. As in the Middle East, we are all associated with a Germanic tribe that took over a small part of what is now France in the fifth century AD. Their leader was called Clovis and he is traditionally counted the first king of France.

Posted by Wardsan 08:31 Archived in Thailand