Musicians at the Sunday Market. 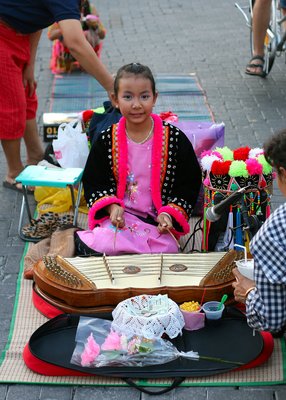 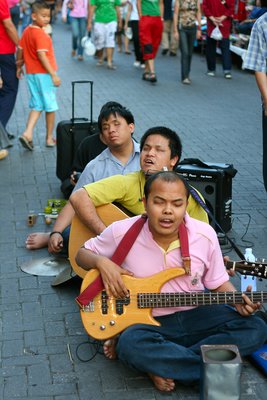 I have put together a job application or two (male model and president for life of Uzbekistan, since you ask). Reviewing my old CVs, I am encouraged to discover that I invented penicillin, the safety pin and the internet and brought peace to millions.

To the west of the old city is a wildly eccentric museum called Insect World. It is run by Manop Rattanarithikul, who is in his mid-seventies. It all started when he was employed as a collector, paid 12 baht a day, for the Malaria and Filariasis Control of Thailand project, run by the US Army. In time he grew to like mosquitoes. He would catch them by allowing them to land on his arm; when they had to be kept alive, he would keep them in a box with holes that were small enough to prevent escape but large enough to allow the mosquitoes to feed on his arm. Not surprisingly, he has had malaria many times.

He went to university in Bangkok, where he met his wife Rampa. She too became a mosquito taxonomist and then a medical entomologist. They both spent the summer of 1965 at the Smithsonian Institue in DC as mosquito taxonomists. Manop eventually went off to practise law but Rampa remained a taxonomist and has, since 1961, identified 436 mosquitoes in Thailand, including 18 new species. There are about 3,000 species in the world. She completed a PhD at Kobe University in 1996.

The entrance is crammed with wooden objects carved by the action of water or by termites. It’s not hugely interesting. The room at the back is devoted to mainly mosquitoes, and partly to butterflies and beetles. Manop loves mosquitoes to well beyond the point of lunacy. “The mosquito bites to remind you of good spirits relations,” he says. “She wishes everybody to love and care for each other.”

He says she, of course, because the males do not suck blood. They live instead on tree sap or flower nectar. He is at pains to emphasise that only ten of the 436 species are disease vectors. The diseases spread by mosquitoes include malaria (by genus Anopheles), dengue fever (by Aedes species), Japanese encephalitis (by genus Culex), and Filariasis (by species of the genus Mansonia). Filariasis is also known as elephant foot, and produces extraordinary swelling of the lower limbs and often of the external genitalia. Nasty. Fortunately the chances of someone in good health developing the disease after being bitten are 1 in 500,000.

Only three hundred people a year actually die of malaria in Thailand, which is nothing from an African perspective. The government’s longstanding malaria prevention project has been fairly successful. On the other hand, in 2007 there were 58,836 cases of dengue fever in Thailand.

They have examples of the mosquito species pinned behind glass – although there are also a lot of live, hungry mosquitoes in the museum. I have been much bothered, in Indonesia especially, by a fairly large mosquito which flies swiftly enough that it is difficult to smack. It bites repeatedly in one meal and the bites swell a fair bit. Its limbs are striped black and white like Cat in the Hat’s stovepipe hat (except that’s red and white). I couldn’t find it in the collection.

Manop also paints, in a common Thai style, using garish Hyde Park Corner colours. Mosquitoes are in all of the paintings, often feeding on humans. He is on the mosquitoes’ side.

Upstairs there is a rather more orthodox collection of insects, mainly butterflies, moths and beetles (estimates vary enormously, but there are thought to be 180,000 species of Lepidoptera and 290,000 of Coleoptera, so they are the two largest orders of insects). The beetles and butterflies of southeast Asia, as Wallace found, are truly outlandish. (This is the two hundredth anniversary of the birth of Wallace’s esteemed colleague Charles Darwin.) There are hundreds of specimens of his longhorn beetles in the museum. These are scarabs. 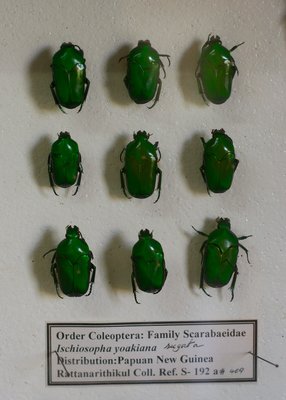 This is a weevil that much resembles a weevil illustrated in The Malay Archipelago. 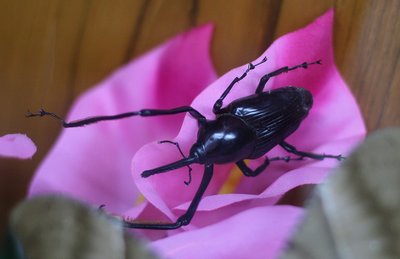 In Bangkok large numbers of middle-aged men are walking around with Thai girls or boys. They are not all married. A large proportion of tourists travelling from Europe to Thailand come for sex, and they go to Bangkok and Pattaya. Or so I thought. But Chiang Mai is also full of such temporary couples.

I went to the Night Market last night and on the way I saw where these couples meet. The street leading to the market is lined with bars and restaurants. The girls sit out the front of the bars and greet every male passerby. You can’t go into one of these bars for a quiet drink. There are also a couple of gogo bars with shows.

I assume they are girls, anyway. You can never tell in Thailand. On Saturday night I saw lots of ladyboys out on the town and dressed to kill. As is often observed, they have great legs.

I didn’t find the market especially interesting. There are lots of stalls selling items largely of limited quality, as at home. I’m not in the market for cushion covers, woven cloth bags or wooden boxes. It would be different if were a girl or collected knick-knacks. It’s a sign that I have been to too many markets. 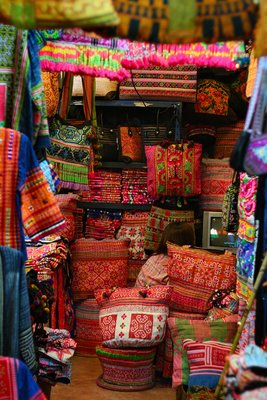 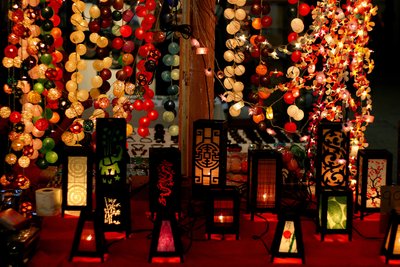 As in Bangkok, tiny Hmong (or Yao?) women wander around trying to sell wooden objects that make a noise like a frog. 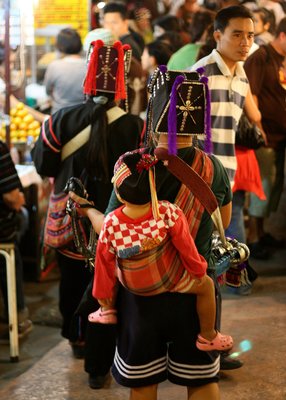 The day before visiting the Museum I attended a cookery course at the Chiang Mai Thai Cookery School. It was very well organised, as it needed to be with 19 of us (the school operates seven days a week, and at that rate makes weekly revenues of £2,700, which goes a long way in Thailand). 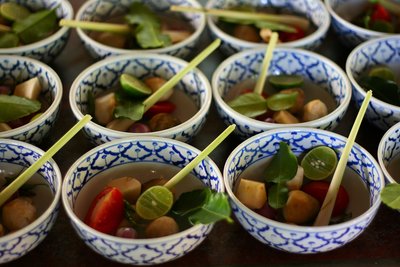 There were three demonstrators, who took turns, and owner and TV chef Sompon Nabnian. We cooked and ate six dishes and got a recipe book at the end of it. 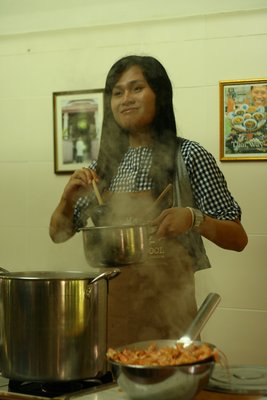 There is nothing difficult about Thai cookery, but I have not cooked a thing in over nine months and found it difficult even to put together a phad thai (the only boring dish in Thailand, which all the tourists eat). We also made tom yam gung, gaeng kheo wan gai (green curry), laab gai, tord man plaa (fish cakes) and tab tim grob (water chestnuts in coconut milk). Lao cookery is almost identical – Isaan and Lao cultures are much the same – but on the Lao cookery course we used MSG, or chicken stock as a substitute. Here we used palm sugar instead, which as well as tasting sweet and slightly spicy, contains glutamates. It’s a better solution. 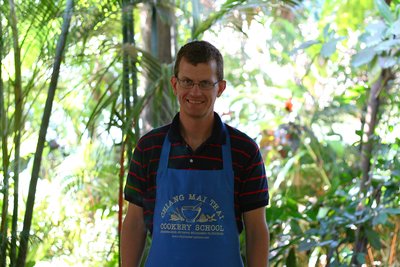 Dhammachakra flags and votive pendants at a wat in Chiang Mai. 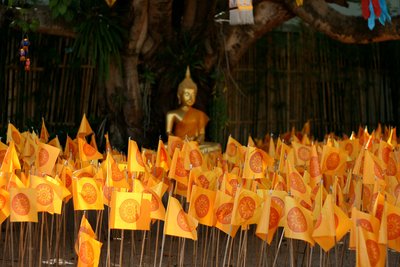 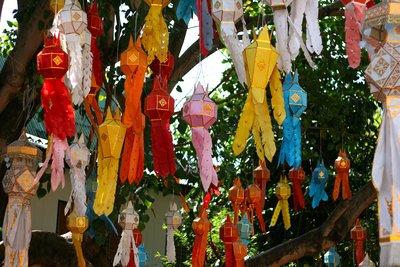 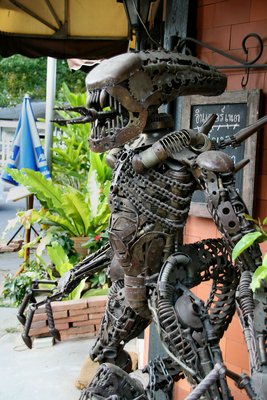 Posted by Wardsan 16:58 Archived in Thailand