I wrote about Chinatown a little while back. Here are some pictures of the rest of Singapore.

Much of the east end of the centre is reclaimed land. This is an old tradition; indeed the Central Business District is built on swampland drained in the 1820s. 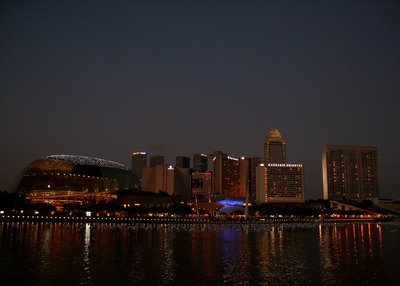 This is the Merlion, a rather naff symbol of Singapore, combining the sea (Singapore’s lifeblood) with the lion that gives the city its name. The statue is situated on reclaimed land near the Fullerton Hotel. 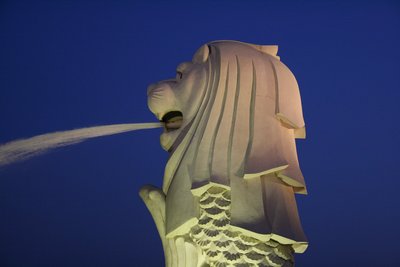 Behind the Merlion is the Fullerton Hotel, built in 1928, which was until recently the GPO. 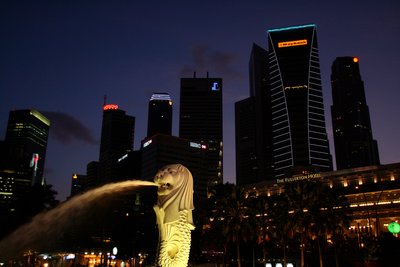 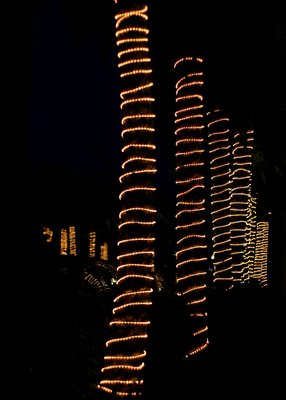 Across the bridge is also reclaimed land – it’s well to the seaward side of Beach Road – and it has, among other things, the Esplanade and Suntec City.

This is Raffles City. The tower is a hotel, designed by IM Pei, an undistinguished building in my view. 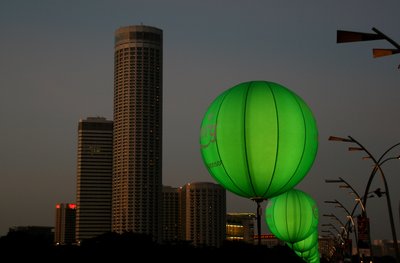 Under the same bridge from which the photograph above was taken is an installation called Lightlines, installed for the Singapore Bienniale last year (2008). 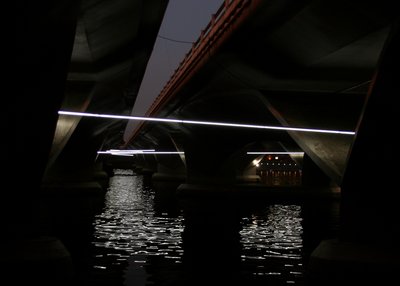 This durian skin clothes the Esplanade Theatres, built from 1996 and opened in 2002. 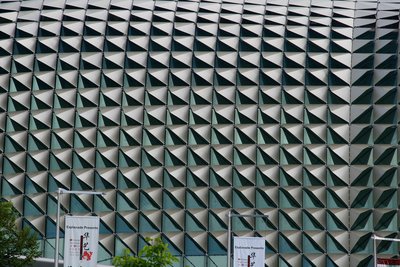 Outside the Asian Civilisations Museum is a ceremonial pole from Sarawak. 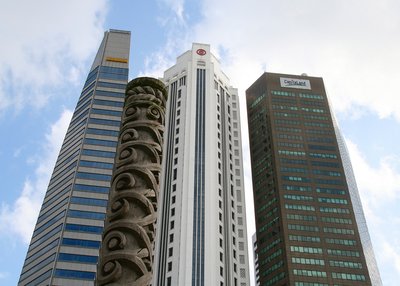 Like the National Museum, this museum is worth at least one visit. The tribal collection is inherited from the old Raffles Museum. It dates from the early twentieth century.

Here is a Pejeng-style bronze drum from East Java, 600-300BC. It is about five feet long. The production and trade of bronze drums almost defines southeast Asian culture. This drum is clearly influenced by Ðông Sơn originals (named after a culture that originated in northern Vietnam and introduced wet rice cultivation and metallurgy all over southeast Asia), which were produced around the same time. 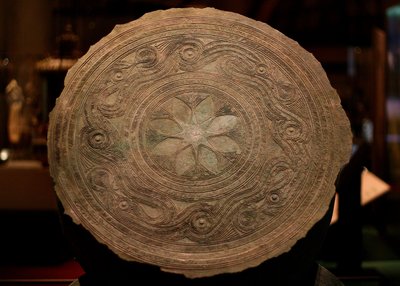 They appear along the old trade routes, and they were indeed traded as very valuable luxury goods. On the top and the upper sides are depicted ritual life (music, rice-processing); boats; houses; and lots of birds, particularly crane, herons and egrets. Frogs are usually found around the rim, too.

Here are a couple of Ðông Sơn drums from the History Museum in Hanoi. 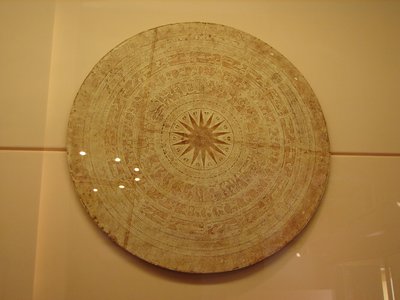 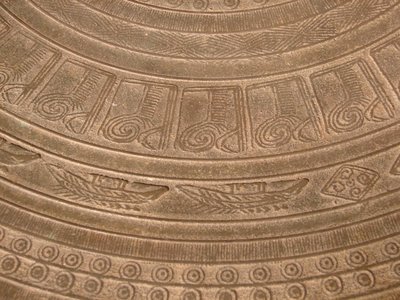 Indonesia has 6,000 inhabitants [I meant to say inhabited islands!] and 500 tribes. The Nias islanders, near Sumatra, were famous for their goldwork. But there is no gold nearby. They obtained gold by trading slaves, first with the Malay sultanates, and then with the Dutch. The gold ornaments were used in ceremonies, and their sacred power could only be harnessed by ritual sacrifices of slaves. 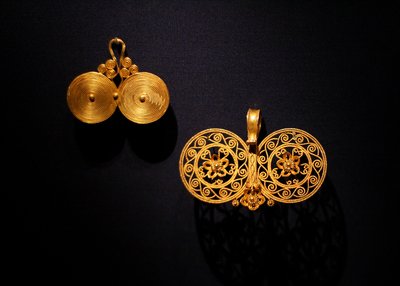 This is a Khmer lintel, Banteay style, made in Cambodia in the 12th-13th century. It depicts Yama riding a buffalo. A kala disgorges a two-headed simba (lion). 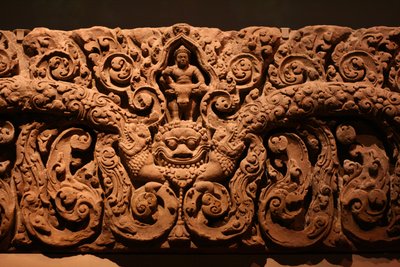 This is all rather confusing. In Hindu mythology, Kala is supposed to be a another name for Yama, or Time. Time is the source and ruler of all things; Brahma existed in the form of time. I do not know what this means.

In Mahayana Buddhist tradition, there is a king of the same name. I don't know whether they are related. (Avalokitesvara, a male bodhisattva, is typically depicted in Vietnam and China as a goddess of mercy.) From the China gallery, this is one of a series of ten paintings depicting the courts of hell (or, more accurately, purgatory). The soul of the deceased goes through ten courts before it is reborn. King Yama is the presiding judge of the fifth court. Late Qing dynasty, 19th century. 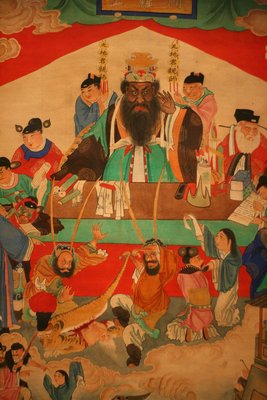 And here is a representation of the same judge from the National Museum in Hanoi. 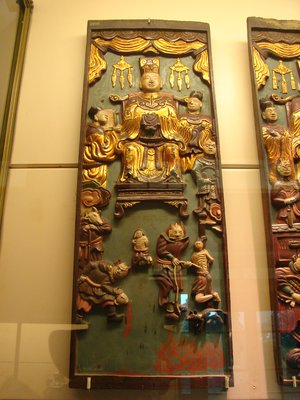 This is a Dayak shield from Borneo. 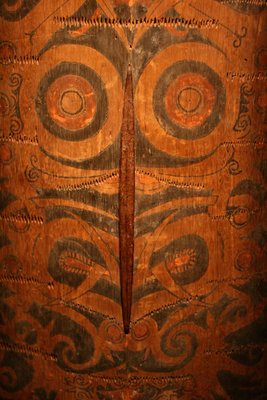 At the moment there is a temporary exhibition called 'Neither East Nor West'. It consists of photographic portraits, mainly of Asians in London about a century ago. This is the Maharaja Jam Sahib, photographed in London in 1920. 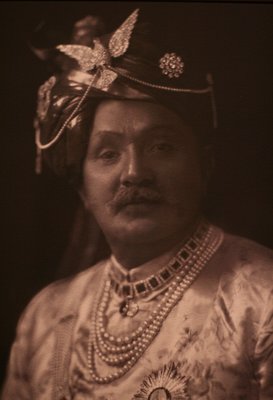 It is perhaps not the best photo in the exhibition, but cricket nuts will recognise him. His full name is Maharaja Jam Sahib Ranjitsinghji Vibhaji of Nawanagar, known to the British public as Ranjitsinhji. He was one of the greatest batsmen of his era, playing 15 Tests (for England, naturally) against Australia, averaging about 45. He lost an eye in a hunting accident in 1915 and went on to represent India at the League of Nations.

This was in Chinatown, I think. It looks like a cutout of the sky, Magritte-style. 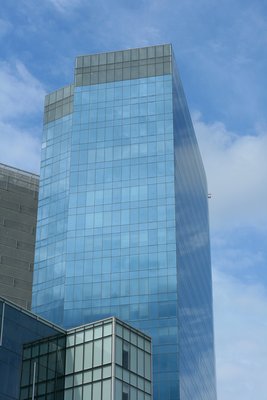 And finally to Changi Airport. As most people know, it is a top airport. There are places to relax and to take a shower, a pool, and free movies. Free internet terminals are dotted around the place. There is wifi everywhere and electrical sockets are provided. There is a food court and a few small islands of green. For example, there is a fern garden, with signs giving information about the ferns, and Kohaku, Showa, shiro utsuri, ku matsuba, tancho, hi utsuri, shusui, and pearl koi in a pond.

There are three terminals, not counting the budget terminal, and you can travel between them both before and after entering the departure lounge. So you can visit a camera store in Terminal 2 and a butterfly park in Terminal 3, and fly from Terminal 1, as I did. (Singapore and Malaysia have 1,000 species of butterfly.) I became completely engrossed and had to run across the entire airport to board my plane. 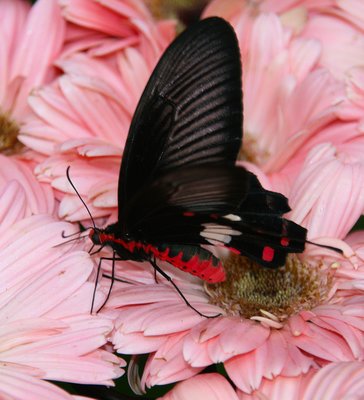 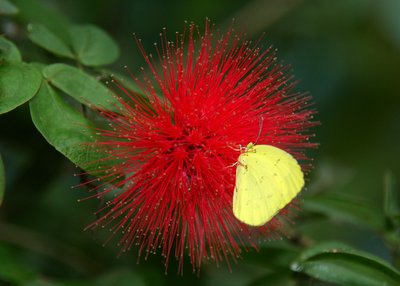 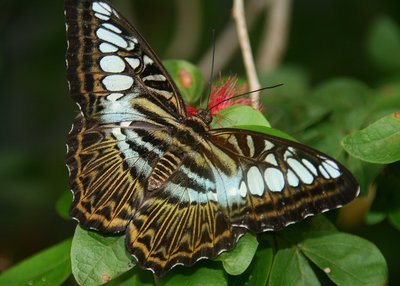 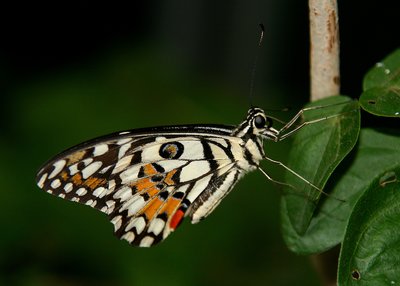 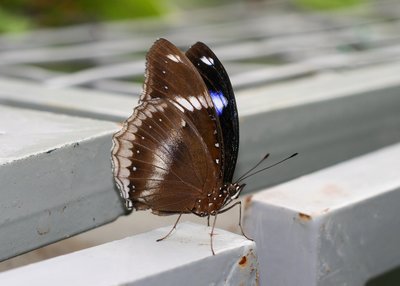 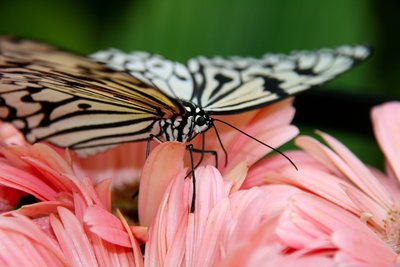 Posted by Wardsan 16:52 Archived in Singapore