As I mentioned a week ago, I have returned to the land of wais and smiles, and popular protests against democracy. I had expected that the trouble in Bangkok, the temporary closure of Bangkok’s airport, and the negative travel advice from foreign ministries around the world might have reduced the number of tourists, but I cannot see any fall. There are more tourists in Bangkok and in Chiang Mai than in the whole of Indonesia, bar Bali.

Anyone who knows me will realise that there is no danger of being my caught in a fire in a nightclub, thank goodness. I am back in Chiang Mai, in northern Thailand, in a pleasant café called Daily Delight. I was here for a night back in March, but never got to enter the old town. First impressions of Chiang Mai are merely moderate. It seems like Khao San Road but with nicer cafes. So far, I would say Ubud is far classier; but I haven’t been to the museums yet.

But the food is good here. I haven’t written about food in a while. A lunch in Bangkok, on the banks of the Chao Praya river: fried rice with crispy fish, spring onion and galangal and a salad of cold oysters, prawns and squid with slices of raw garlic and a lime and chilli sauce. Nothing extraordinary, but very nice. Lunch on the banks of the same river in Ayutthaya, crispy catfish and mango salad, and pickled Thai sausage. Lunch yesterday: a creamy curry noodle soup called khao soi, followed by hot bananas in coconut milk. There is a lot of variety in Thai food: the curries and soups are familiar, but the stir-fries and spicy salads are less so. And the raw, fermented sausages entirely so.

I have decided to stop here for a while. There is plenty to do – wats, cookery courses, trekking – but more importantly I need to put a CV together and start applying for jobs, and this is as good a place as any. The process of reviewing my 'career' and completing application forms is extremely aversive, and I have been indulging in lots of displacement activities, such as uploading photos to flickr.

The Thais have their own (lunar) new year, but they also celebrate our Gregorian Tết with enthusiasm. (Incidentally, the original meaning of Tết in Vietnamese is a growth notch in a bamboo stem, and it can be applied to any festival.) Fireworks play a big role, of course – not least because there are plenty of Chinese people in Thailand – but there is one lovely tradition that I have not seen before.

People carry large transparent plastic bags to the banks of the old town’s moat. When opened out they are squat cylinders with the bottom end open. To the open end is affixed a candle, and once the air in the sac has expanded, the balloon ascends. Releasing them is a silent act, individually meaningless but beautiful in aggregate, a far more refined tradition than our own crass, pet-torturing, look-at-me-fuck-you technicolour squibs.

The miniature Montgolfier machines drift slowly heavenwards, reaching hundreds of feet or more. Those near the ground are clouds of amber jellyfish. Upon rising they shrink to points, and last night the celestial hemisphere had new, ever-shifting constellations of orange orbs. The Chinese no doubt see dragons everywhere; I saw the cities of the northern hemisphere in polar projection.

(I later spoke to some tourists who had been in Luang Prabang over the new year, and that said that they do the same thing there.)

A less wonderful tradition is one of many Asian viruses, karaoke. In my room in Chiang Mai my ears were assailed by the worst singing I have ever heard – two women who manage to miss the correct notes, and each others', by every possible margin, including the maximum (probably a fifth, if you think logarithmically).

As the old year died I was watching Quantum of Solace on my laptop: a fairly poor movie with a poor title (Fleming's own), but Daniel Craig was terrific.

One of the relatively few tourists I met in the Bandas was a French-Pyrenean who went by the name of Ganesh. He imports goods from India and sells them in markets. He has tattoos of Ganesh, but he looks more like Rasputin. 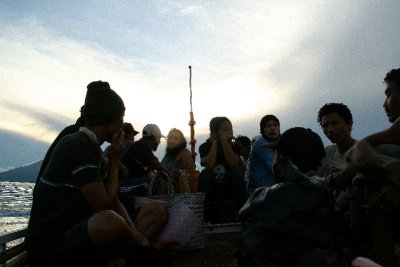 Anyway, he is very well travelled, and he told me that Muslim women in Indonesia undergo “female circumcision”, which is against the law in many western countries.

I was not sure whether to believe it, but sure enough the Ulema Council of Indonesia said in 2006 that female circumcision is “necessary” for Muslims. It “cleans the filth from the genitals” said a spokesman, H Amidhan. According to this article in the New York Times, 96% of Muslim women in Indonesia have been cut. It’s amazing. Most people know that many African women are circumcised, but fewer know what happens in Asia. It’s important to note that apparently circumcision in Indonesia is a ritual, er, prick with a needle or removal of the prepuce only, but one of the aims is apparently to reduce libido, which presumably works by making intercourse painful.

Posted by Wardsan 12:06 Archived in Thailand