On the way back diving in Ambon Bay our boat was flagged down by the police. We were boarded by two armed policemen. 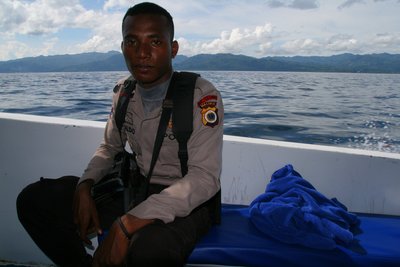 Travelling around poor countries it is wise to be cautious about contact with policemen. The more corrupt the country, the higher the proportion of their income public servants derive from bribery and fines, often levied at the point of a gun.

But they weren’t after tourists. ‘No problem, mister,’ they said to us. They were on the trail of smugglers. Presumably they had a tip-off, as they knew exactly which boat they wanted. We rounded the headland and approached a fishing vessel, which the policemen boarded. 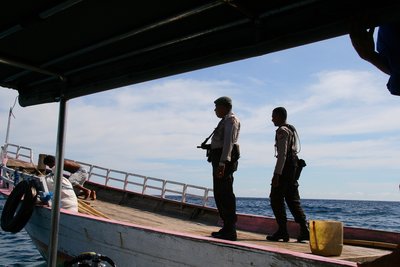 After ten minutes’ searching in the hold, they found two petrol cans, each filled with a palm distillate known in the Moluccas as sopi. The police confiscated the cans, but did not take the further actions you might expect, like fining or arresting the hooch-runners. 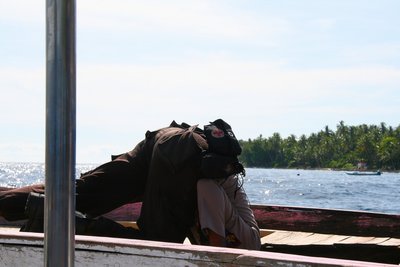 From the cans there drifted a fruity alcohol aroma reminiscent of that in a bodega in Jerez. I had seen a bamboo sopi still in the Siwa Lima museum outside Kota Ambon and wanted to try some. I wondered whether it would be pushing it to buy the contraband from the policemen.

But it wasn’t necessary. As payment for the use of the boat, we received a bottle of sopi. One of the dive guides took it. (All of the guides at Maluku Divers were Muslim, but some more than others.) One of the policemen took my water bottle. I thought I was getting a share too; actually he was just borrowing my bottle. Indefinitely.

We three divers – the others were from Hockenheim - tried it. ‘Very strong’ pronounced the locals. Under 30% abv, concluded the tourists. It was OK, but still by far the best rice wine or palm wine I have tasted was in Kim Sơn in northern Vietnam.

Singaporeans are among the most myopic people in the world. There are lots of opticians, but they are as expensive as those in London. Lasik eye surgery is a big business here. You see Lasik clinics in the shopping centres, and procedures are advertised at less than S$1000 an eye.

I have thought about having it done myself, and looked into the details of the procedure. There is nothing terrible about it, although I don’t much like the idea of being able to smell my burning eyeball during the procedure. But you also need periodic check-ups afterwards, and that is not practical while I’m travelling.

I still don’t feel like travelling, however. I still haven’t decided where to go next, and that’s partly because I don’t really want to go anywhere or travel around Christmas. It’s also down to ignorance, as I don’t know anything about Thailand outside Bangkok. I’ve spent the afternoon trying to find a good bookshop in central Singapore, without success.

Kota Ambon seems to specialise in hairdressers. The males are flamboyantly gay, often plastered in make-up. My barber was dressed in a tight t-shirt with pink hearts, which highlighted his paunch.

Generally speaking, Indonesians are a different build from people in Indochina. They are no taller, but are much stockier, putting on both muscle and fat easily like Samoans. The average Vietnamese man probably weighs 50 kg, while many Indonesians weigh as much as me. The bigger men look just like Oddjob from Goldfinger.

On the way from Bitung to Manado I had an interesting chat with Sami, a retired teacher from Malaysia. Sami is ethnically Tamil and told me at great length about Malaysia’s discriminatory policies. He says that it is a requirement that bumis must own at least 30% of the equity of any private business; the best primary and secondary schools are reserved for bumis; Petronas is run by Malays for Malays; the bumi discount on property prices applies not just to the poorest band of properties, but to all; etc.

He also lamented the rise of conservative Islam in Malaysia. He says that article 4 [actually article 11] of the Malaysian constitution – which was drafted by the Reid Commission in 1957 - protects freedom of religion. But article 153 states that Malaysia is a Muslim country. The courts and government cite the latter article frequently, and never the former. [In fact, article 153, as amended in 1963, gives to the king the responsibility of safeguarding the special position of the Malay and other indigenous peoples of Malaysia. Inter alia, it permits the use of quotas for entry into public education and the civil service. It was originally intended to be reviewed in 1972, but the review never took place. Under article 160, a Malay who converts from Islam loses his bumi rights.]

He also says – although I don’t believe it at the time – that non-Muslim publications are not permitted to use the word Allah. Instead they use other words, like Tuhan (Lord). It turns out that he was telling the truth. The government has said that use of the word Allah by non-Muslims would confuse Muslims. The government and the National Fatwa Council must think that Malaysian Muslims are very stupid.

Fresh from this triumph, the Malaysian National Fatwa Council has prohibited Muslims from practising yoga, because elements of Hinduism would corrupt them. More recently, after protest and derision, the PM clarified that practising yoga is acceptable so long as the person does not chant religious mantras. The Indonesian Ulema Council, which follows Malaysia, is now investigating the practice.

[By the way, how many ordinary British citizens could quote articles from the constitution of the UK? A trick question of course, since we do not have a written constitution.]

Posted by Wardsan 18:03 Archived in Indonesia