I have passed a couple of ordinary English days at home, reading The Economist, listening to things like Pomp and Circumstance Nos. 1 and 4 and Radio 4 podcasts, deleting photos, surfing the Amazon and blogging. On this trip, though, these are extraordinary days. When I say ‘at home’, I mean at the apartment of Tassos, a friend of mine from Cambridge who ensures he is out of the continent when I visit Singapore. It is in a somewhat higher-rise version of Surbiton (Urbiton, presumably), to the east of the centre. It is lovely being able to potter about a place with a kitchen, a washing machine… Although Tassos forgot to mention the cats. I am confined to the bedroom; if I stayed in the sitting room I would be dead within a few hours.

The money I am saving on hotels I have spent in Carrefour. The night before last I had my first taste of an English beer in nine months: a bottle of Young’s London Ale. I have never heard of it, and perhaps it is export only – it weighs a whopping 6.4% abv. It was simply better than any beer I have drunk while travelling. Last night I had a Fruit Défendu, also not bad, and a spicy Peranakan meal as a nice change.

I am wasting time, but I think it is important to do so. By the end of my time in Indonesia the small irritations had started to get to me; a few days in Singapore and I’ll be ready to travel again, although I don’t yet know where: Thailand, New Zealand, Micronesia? The first step is to decide where to stop over Christmas: take the sails down and point into the wind. Half the shop assistants in Makassar (the Christian half) were wearing Santa hats by the time I left. Christmas is a big festival in Singapore, although not as big as Chinese New Year. I ate on Orchard Road last night and the place was heaving with Christmas shoppers, much like Oxford Street (but much nicer).

An interesting - and needed - article in The Economist on the deep-seated problems in Thai politics.

The Competition Commission has ruled that BAA must sell Gatwick and Stansted. Quite right, and not before time. Since it was privatised as a monopoly, BAA has consistently and massively underinvested in the London airports – an outcome entirely predictable from the flawed market structure. In ten years time, with a bit of luck, we may have large airports in London that are not a national disgrace.

Asia, meanwhile, possesses most of the airports regularly voted the world’s best. Even Jakarta Soekarno-Hatta is nice. I am now in a good position to judge, having taken off – and landed – twenty-five times in the last six months. 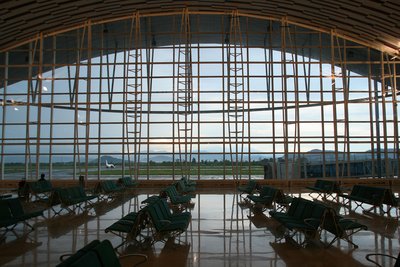 (This is Gate 1 at Makassar Airport.)

Notwithstanding the constant hopping, my carbon footprint is bound to be smaller than yours (although the concept is useless in my opinion, since it ignores the productivity or otherwise of the carbon-burning activities). Travelling in the tropics I do not drive; take public transport everywhere; never use heating, eat food locally sourced (except in Singapore) and rarely use aircon. The UK government should subsidise me.

According to an article in Ecology Letters (my nightly reading, ahem) in 2006, up to 73 million sharks are killed each year for the fins alone. Live sharks have their fins and tails removed and are then thrown back into the sea. In some places, the livers are also removed, but not in the Moluccas. (Needless to say, I didn’t know this when I ordered shark’s fin soup in Malaysia.)

At auction, fins from a shark of average size sell for $500. Yet the value of a living shark at dive resort destinations is estimated at $10,000-$20,000 a year. (I do not know the method used to estimate this, however. And is it an average value or a marginal one? In fact I do not find this figure credible.)

There is also an ecological cost. When large sharks disappear, there is an increase in the population of small sharks and rays. These, in turn, may be voracious predators of commercially valuable species such as scallops in North Carolina. The absence of large sharks may also allow other undesirable predators such as crown of thorns starfish to grow in number.

Fishermen in the Philippines and Indonesia spray reefs with sodium cyanide, the substance used to execute Texans. This stuns the wrasse, which can then be transported alive to Hong Kong and Singapore. (Hong Kong eats its way through 15,000 tons of reef fish a year.) While it stuns the wrasse, the cyanide kills anything smaller, so every time a Napoleon is eaten, hundreds of reef fish have died.

Companies all over the world – with a few exceptions I suppose, such as Iran and North Korea – like to advertise with snippets of English. In Indonesia, Wings Air says “fly is cheap”. Lion Air boasts “we make you fly”, which seems unnecessarily coercive.

A few months ago I dived in Tulamben, on the east coast of Bali. It is known for its wreck, the USS Liberty. Divers are delivered to a car park next to the beach in the van from the dive shop. The gear is carried to the beach by local women. They are all members of a cooperative, Sekar Baruna. As with many businesses in the area (laundries, shops), the business was started with a microloan.

More than 75% of microloans go to women. The average loan is about $180 and the repayment rate is about 95%, which compares with credit cards.

On the Java-Bali-Lombok tour we spent a night at Sengigi. It is an unremarkable port, except for its beach, which is composed entirely of forams. The group Foraminiferida, belonging to the phylum Sarcomatigophora, are single-celled organisms with chambered shells. They range in size from 100 micrometres to several centimetres. Like hard corals, and coralline algae, they have calcium carbonate skeletons, and like many corals, and some clams and nudibranchs, they host symbiotic algae. It has been estimated that 50% of the Earth’s calcareous sedimentary rock formed on sea beds is made up of forams. Much of Kent, for example is chalk: forams in rock form.

Posted by Wardsan 12:11 Archived in Singapore