The island of Flores has two good reasons to visit, both in the far west: the diving and the reptiles. You stay at Labuanbajo to see both. In this post I'll describe the diving. 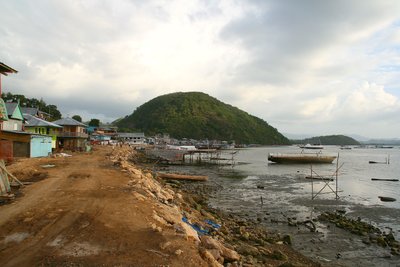 I dived for three days, I think, and snorkelled for an afternoon. The diving is world-class. The currents can be strong and there are washing machines, but there are also large pelagics: sharks, trevally and manta rays. I dived with Bajo Dive Club, a shop run by a saturnine German; my dive guide throughout was Kira, who did an excellent job. 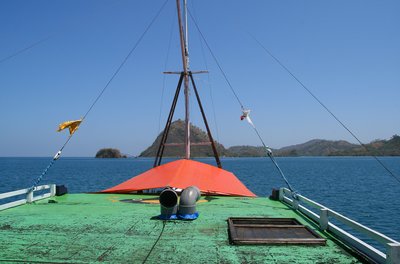 At Tatawa Besar, I saw boxfish, pufferfish, groupers and a few hawksbill turtles, some baby snappers and a school of black surgeonfish. This is a spotted boxfish. 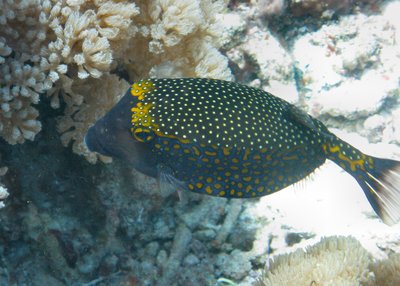 This is a pufferfish. 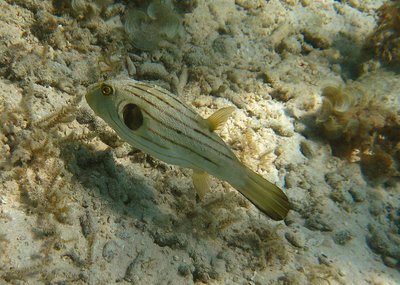 At Manta Point I saw the biggest lobster I’ve ever seen; a huge moray eel, being cleaned; lots of clown triggerfish; several bumphead parrotfish and a Napoleon wrasse; a sleeping white-tip reef shark. A blue-spotted fantail ray swam right under me. I got very close to an angelfish, fins extended in ecstasy, being cleaned. These are fox-faced rabbitfish receiving the same treatment. Fish at cleaning stations typically hover, facing diagonally upwards, and extend all their fins. I have seen black snapper open their mouths so far for the cleaner wrasse that you can see through their gills from in front of their mouths. 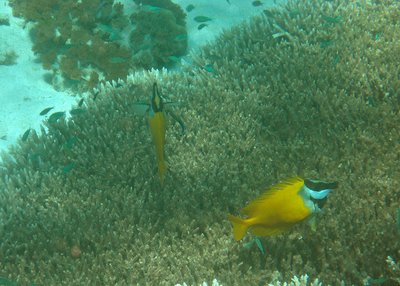 Oh, and half a dozen manta rays. I got within about three feet of one. In fact, at one point, I was taking photos of something small when a ray came right up behind me. You cannot communicate underwater, so I didn't know. This is me taking photos once I had come to my senses. 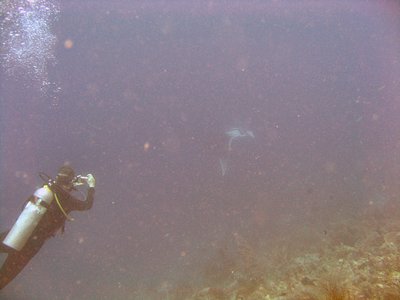 The biggest was about 5 metres across. Another was being cleaned and I could see it up close: they have a long tail, a tiny dorsal fin, and the feeder aerofoils (which give the ray its Linnaean name, Manta birostris) are flexible. A great dive.

At Batu Bolong there were strong and variable currents, washing machines, and cold water. It was a rich wall reef, as rich as Sipadan. Several hawksbills; a couple of white-tip reef sharks; some large grouper and sweetlips; a mantis shrimp; a white-margin unicornfish; giant pufferfish; six big-nose surgeonfish; two lionfish, swimming freely; two kinds of nudibranch; and bluefin, silver and giant trevally.

At Sabolon Kecil I saw lots of bumphead parrotfish – one swam right beneath me as I fiddled with a camera. 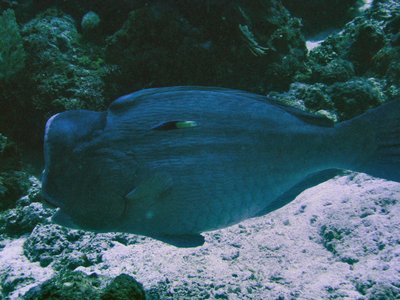 Yellow and spotted boxfish; nice gorgonians; a sandy patch of garden eels; red-tooth triggerfish. These are the garden eels; come any closer and they retreat into their burrows. 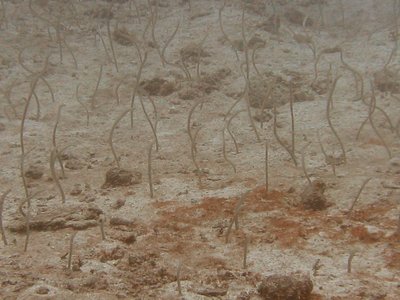 I took several photographs of banded boxer shrimp, up close, before realising that my hand had been only inches from the maw of a moray. 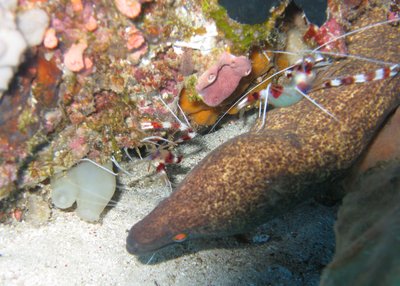 Best of all, a white manta ray joined us and circled around. 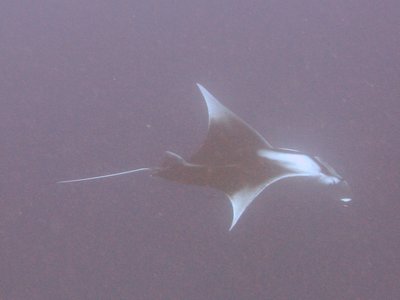 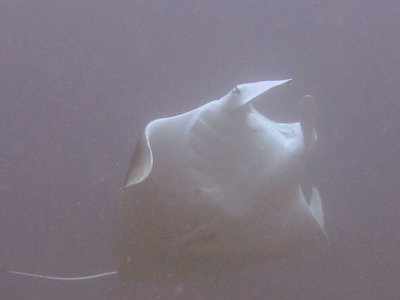 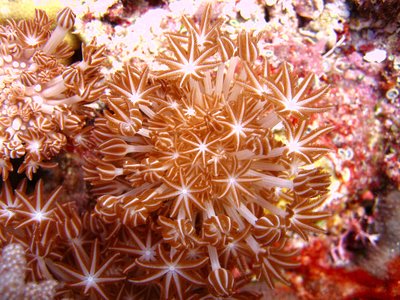 We also saw two juvenile shaded batfish. When younger still, they have an even more exaggerated pinnate shape, and are black with a ready-brek orange margin. 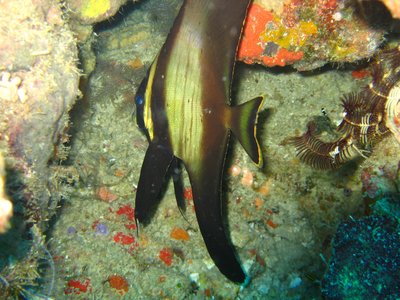 And a spotted eagle ray, black with white dots. It had a very long tail and was perhaps 6 metres long: it drifted very slowly, and then when it saw us it shot off very rapidly, flapping quickly. 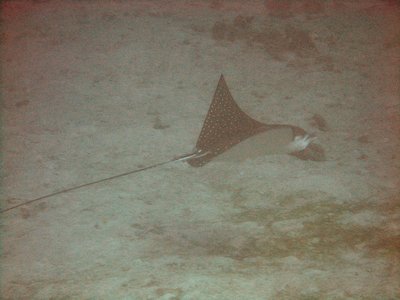 At Castle Rock, we swam against a strong current and I never recovered, having to vomit slightly into my regulator. The current was occasionally downward. Nevertheless it was not a bad dive. We saw a bright white scorpionfish; a school of motionless ribbon sweetlips; a small Napoleon wrasse; tobies; spotted boxfish; clown triggerfish; a school of long-fin batfish; a big hawksbill, feeding; a blue-spotted fantail ray; several sizable reef cod; and a white-tip reef shark. But best of all were the trevally: schools of silver trevally, plenty of bluefin and lots of huge giant trevally, very dark, with big teeth.

And at Crystal Rock, it was a very good dive although we were restricted by washing machines at both ends of the dive. The divers’ bubbles go in weird directions; the fish shoot downwards and then struggle up against the current. We saw two hawksbill turtles, one I watched for a long time, feeding, a rusty stain on its rear shell and flippers. A huge Napoleon wrasse cruising slowly. A baby white-tip reef shark under a table coral. A lot of lionfish swimming free. Blue-spotted fantail rays and lots of unicornfish. Two huge fat Phyllidia nudibranchs, together, and a small Chromodoris. 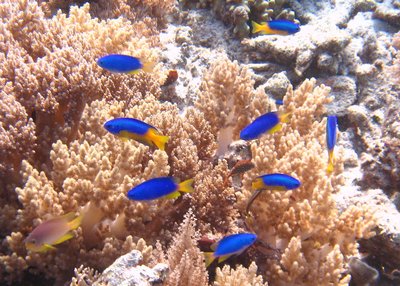 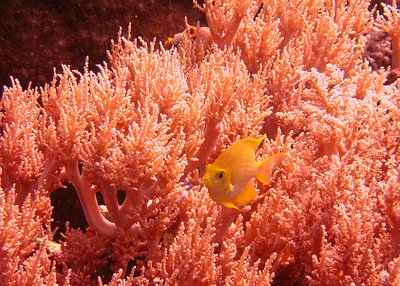 Finally, strangest of all is a network lamellaria, sitting on Kira's tank-banger. It is about a centimetre long. It is not, as it appears, a nudibranch; in fact it is more closely related to cowries. 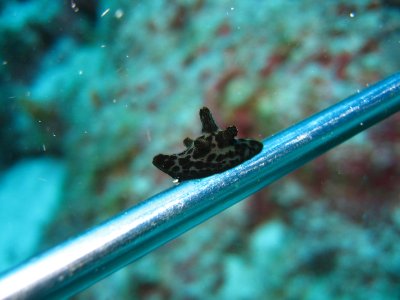 On the Sabolon Kecil dive, a guy called Matias was stung by a lionfish on his first ever open water dive. He went very grey, and his hand swelled up and his finger went black in patches. He was in real pain for a while. But he bravely persevered and dived again a couple of days later.

If that was a lionfish (and that was speculation), imagine a stonefish wound. Its venom, a myotoxin, is ten times stronger. The pain is very severe, and may last for hours, days or months. Symptoms include difficulty breathing, delirium, vomiting, shock and cardiac arrest. Without treatment, the tissue at the wound inevitably becomes infected, ulcerated, abscessed and gangrenated within a few days.

The treatment for a puncture wound from a venomous fish is hot water, poured over a towel to hold in the heat. The hot water is thought to denature the proteins in the venom.

I read about this is a book called something like Indonesian Reef Guide, by Helmut Debelius, available in German and English. There is an extract from a 1951 article in a South African medical journal, in which Dr J L B Smith describes the symptoms after a stonefish punctured his thumb.

Many African victims had lost fingers and toes, which had become gangrenous and fallen off. Dr Smith did not suffer from this because his wife gave him 1,000,000 units of penicillin, repeated a week later. And it was she, I believe, who came up with the hot water treatment.

Even after this treatment, after 80 days Dr Smith reports:

Hand still weak… thumb barely moveable, toxin has had a marked adverse effect on my general health and condition.

Given the extraordinary toxicity of the spines, it is a shame that the stonefish is perfectly camouflaged – much more so than lionfish.

Posted by Wardsan 15:50 Archived in Indonesia