I'm back in the southern hemisphere after my diving trip to Manado. I managed five dives in the Lembeh Straits, to the east of Manado. As Jaakko from Living Colours put it, Lembeh is "a dirty harbour", so whoever managed to promote it as a dive site is a genius. 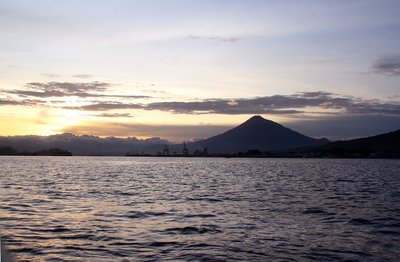 But it is world-famous for its muck diving; there is very little coral, and much of the bottom is black volcanic sand. (Sulawesi is not generally volcanic, but the volcanoes that head to the end of Nusa Tenggara head north through Maluku and then back up through the north of Sulawesi on their way to the Philippines.) Here divers find and photograph unusual things.

A good number of frogfish. These are also known as anglerfish. They live on the bottom, and walk-roll on four fins looking mean. The first dorsal fin is adapted to carry a lure, or esca, which is dangled and flicked in front of the large mouth, looking like a swimming shrimp or small fish. We watched a chocolate and cream painted frogfish (Antennarius pictus) for about ten minutes and it walked straight towards us like the sort of beefy Londoner that keep a hungry pit bull to compensate for the inadequacies of his character and anatomy. We also found a couple of hairy frogfish (Antennarius striatus; I found one, of which I am very proud), which are much prized by divers.
Lots of scorpionfish, including a striking purple paddle-flap scorpionfish, Rhinopias eschmeyeri, and a number of leaf scorpionfish, Taenianotus triacanthus.
A number of mantis shrimp, of the boxing type.
A couple of free-swimming snake eels, perhaps Napoleon snake eels.
A number of garden eels, Heteroconger species.
A bright yellow (female) ribbon eel, Rhinomuraena quaesita, up very close.
A lot of blue-spotted stingrays, Dasyatis kuhlii.
Half a dozen flying gurnards, which are extraordinary and beautiful.
Three sea moths, Pegasus species.
Some longhorn cowfish, Lactoria cornuta.
Several waspfish, Ablabys macracanthus. These are related to scorpionfish, but the dorsal fin begins above or forward of the eyes. They flop from side to side like leaves in the surge.
Lots of small Periclimenes schrimp, usually on tube anemones. They are transparent except for the purple joints.
A lot of commensal pairs of gobies and Alpheus shrimps. The gobies keep watch. The Alpheus, blind, build and maintain the burrow that they share with the goby. The shrimp always keeps an antenna on the goby, and when the goby flicks its tail in warning, the shrimp disappears into the burrow.
A barramundi cod, Cromileptes altivelis.
Several schools of very attractive Banggai cardinalfish, Pterapogon kauderni. These are beige with black stripes and they have very large fins. The pectoral fins are black with a dusting of icing sugar.
A lot of purcupinefish and related species, including a lot of small, rusty orbicular burrfish, Cyclichthys orbicularis, and a few balloonfish, Diodon holocanthus.
A number of flounders.
Lots of big painted flutemouths.
A pink-red ribbon of sea slug eggs, perhaps those of the Spanish Dancer.
Lots of nudibranchs, including Berthella mertensi, a huge Pteraeolidia aeolid, a tiny blue Phyllidia, Phyllidiopsis annae, more Nembrotha kabaryana, Halgerda bacalusia, and Ceratosoma tenue.
A mushroom coral pipefish, a tiny white relative of the seahorse.
A couple of thorny (or perhaps common) seahorses. They are very, very weird.
A dark red roughsnout ghost pipefish, in patch of dark red algae, Solenostomus paegnius.
A small Sepia cuttlefish, with which I tried to have a sign language conversation for five minutes. They communicate in colour, so it is difficult to answer back.
Lots of lionfish.

Unfortunately I have no photos. I rented a camera but it didn't work.

The diversity of fish in Indonesian waters exceeds that in any other part of the world. Pieter Bleeker spent thirty years in Indonesia as an army doctor from 1842. He pulled 800 species out of the waters of Ambon Bay and published the Atlas Ichthyologique, still something of a bible. 1,100 species of fish have been counted in Maumere Bay alone (cf 1,250 in European waters). It is not easy to know what you are seeing. The same applies to corals: there are 450 reef builders in Indonesia, against 50 in the Caribbean.

More linguistic confusion: in an Indonesian accent 'fishing' and 'pissing' are the same. And 'potty', as a noun, is pisspot in Indonesian.

A couple of weeks ago an eight-year old boy died in Flores of rabies. There have been 135 deaths from rabies in the last ten years in Flores. The boy was bitten in September, but received medical treatment only in November. By then he had reached stage 4, when the victim is afraid of water, wind and light.

Lorenso's in Bunaken had a library of second-hand books, and I'm a bit light on books, so I read a lot while lounging in a hammock and watching the rain. Books read recently:

I am off to Ambon tomorrow, and thence to Banda by ship if I can manage it. Banda is remote, and I am trying to get there as soon as possible in order to give myself a good chance of getting out of the country by the time my visa expires in the middle of December. I don't expect to find many internet connections along the way.

Right - now for a McDonald's! Bliss.

Posted by Wardsan 20:14 Archived in Indonesia